It took playing a woman who is empowered by becoming a film director in HBO series “The Deuce” for actress Maggie Gyllenhaal to imagine becoming one herself. As soon as she did, after binging the books of Elena Ferrante, from “My Brilliant Friend” to “The Days of Abandonment,” Gyllenhaal was inspired to take the plunge. Three years ago, on the verge of her 40th birthday, Gyllenhaal first wrote to Ferrante, asking the Italian author (whose identity is protected by her publisher) to let her option her 2006 novel “The Lost Daughter” for the movies. After a few email exchanges, the writer said yes. But her contract with Gyllenhaal was void, she told the actress, if she didn’t direct the feature herself. (Ferrante explained why in The Guardian.)

Gyllenhaal eventually obtained the author’s blessing on her script — which often departs from the original) —and cast Oscar winner Olivia Colman (“The Favourite”) and Jessie Buckley to play Leda, a British professor vacationing in Greece, and her younger self, a young mother juggling academia and two young children. And this year, Gyllenhaal went from watching 24 films on the jury at Cannes to taking “The Lost Daughter” (December 17, Netflix) to Venice, where she won Best Screenplay. More accolades followed at Telluride, where we spoke, and at the Gothams (four awards including Best Feature and Lead Performance for Olivia Colman) and the New York Film Critics Circle (Best First Film). “The Lost Daughter” has awards momentum.

Gyllenhaal came out of this experience knowing one crucial thing: “I did learn that I am a director,” she said. “I maybe always have been a director. And that I just hadn’t let myself even consider that possibility.” 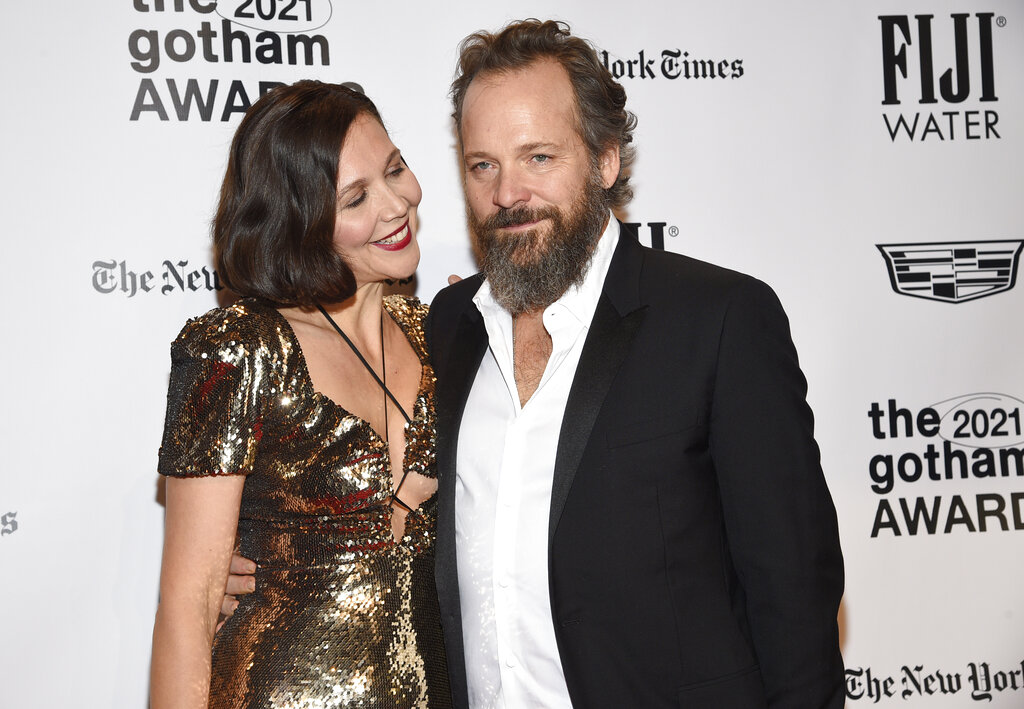 Gyllenhaal points to directors like Campion as among those making films while she was growing up. But Gyllenhall also watched her mother, Oscar-nominated screenwriter Naomi Foner (“Running on Empty”) struggle with getting to direct (“Very Good Girls”), as her father Stephen Gyllenhaal (“Paris Trout”) pursued a long directing career. The two Gyllenhaal kids, older Maggie and younger Jake, took up acting. “When I was growing up,” she said, “I felt like if you were a lover of movies, a storyteller, and you’re a woman, at least for me, I was an actress. It was ‘The Deuce,’ in retrospect, where I was deeply imagining being a director, where I softened up and allowed myself to consider it a real possibility. And the second I allowed myself to consider that, it started to happen.”

Jake, who grew up listening to his mother debate feminism with his sister in a competitive household, is rooting for her success. “It was definitely a moment of great pride and joy when she won the screenwriting award at Venice,” he told me. Recently, Gyllenhaal developed a limited series with his sister. “Of course, I can fucking count on her. She’s a beast. I knew it the whole way along. Maggie is a leader. And as a producer, it’s everything you want. You don’t have to do much at all. The magic is happening. Because this person is a fierce magic maker.”

As she read Ferrante’s novels, Gyllenhaal reeled from feeling engaged to so repulsed, in the case of “Days of Abandonment,” that she kept dropping the book on the floor. “It is a brutal, incredible book,” she said. “And then I read ‘The Lost Daughter’ and felt, ‘Oh my God, this woman is so fucked up.’ And then two seconds later inside the same paragraph, I’d be filled with this feeling, ‘Oh my God, I really relate to this.’ And so then what: Am I so fucked up? Or is this a common experience that’s just not being talked about? And so I thought: ‘All these truths about being alive In the world, are being expressed here in a way that is scary, and painful, but also comforting. If I’m having this feeling alone by myself over and over again reading these books, what would happen if you put it on screen and then you’re in a room next to, say, a woman you don’t know? Or your husband or your daughter or your mom? Like, how electric and terrifying and radical that experience could be!’ And that was why I wanted to adapt it.”

As Gyllenhaal set out to tackle the script, she wrote it for herself. “I was after what was most truthful,” she said. “That’s the place that I’m hardest on my own work. If something doesn’t feel real, I don’t want it in. So that’s how I wrote it. I didn’t stop until I was pleased with it.” She also leaned on her readers: Amy Herzog (“Scenes from a Marriage”), her mother Foner, and her husband Peter Sarsgaard, who stars in the movie as the sexy professor who seduces young Leda when she escapes her domestic confines at a heady academic conference.

“I thought, ‘Maybe casting my husband as the object of desire with a bright, brilliant, incredible, beautiful young actress is not a good idea,’” Gyllenhaal said. “Something from my unconscious just burst through and went: ‘Actually no, that’s a simplistic, scared, bourgeois way of thinking. I’ve been with my husband for 20 years. We’ve been through so many things and I know he loves me and there really isn’t a better actor for this job.’”

While Gyllenhaal was never a journaler or creative writer, she has always “understood my own mind through writing it down,” she said. “If I have to write a really important email or give a speech somewhere, I sort through what I think about something by maneuvering it around in written words.” After writing “The Lost Daughter” script, an idea for a short popped into her mind, which she then wrote and directed for the pandemic series “Homemade.” She’s hooked.

Ferrante’s novel is told in the first person, and Gyllenhaal tells the story from Leda’s perspective in two time frames — but without narration. “The scripts I like as an actress are where there is space in terms of how things are expressed,” said Gyllenhaal. “If you’re working on a script that’s bad, then the only way you can get from here to here inside of the piece is to do a triple backflip and land on both feet. If you’re working on a script that’s excellent, in my experience as an actress, things can be expressed in any way. So I wanted to create a script that had that space in it for my performers, because I know that’s what’s fun for actors to do.”

And to Gyllenhaal’s credit, we rarely get to see a middle-aged woman who is professional, accomplished, and not skinny lounging on the beach in her bathing suit and cover-ups and flirting with not only an older man (Ed Harris) but a younger one as well (Paul Mescal). “Isn’t it so comforting to see something real on the screen?” said Gyllenhaal, who keeps her roving camera tied to Colman’s expressive face and body. “The movie is in her mind. And so in some ways, you look at her arm, you look at her breast, and you see her mind.”

Clearly, while the professor is trying to enjoy her solo vacation, she is grappling with deep regrets, as she watches a young mother (Dakota Johnson) freak out over her missing daughter. “We meet her at this point where she can either slowly die or become more and more fragile,” said Gyllenhaal. “She can barely walk down the street without thinking she’s gonna pass out. She’s full of anxiety, she’s full of rage. Or she goes into the terror, the pain, the confusion of her past and allows it to open her up to the possibility of being alive. And she happens to have done some very aberrant things, very difficult to live with, but she’s extremely brave and she does the second thing. I do think that the movie ultimately has a happy ending.”

By tethering the storytelling to Leda’s subjective point of view, the audience is left questioning whether she’s a reliable source. “Are these people actually dangerous?” said Gyllenhaal. “Are they actually a threat to her, or is this in her mind? That’s mixed with playing a little bit with the tropes of a thriller, with the danger even in a horror movie, like something’s after her. We’re gonna lead you down the road of: She’s in danger, a woman in peril. When in fact the danger, the thing that she’s actually being terrorized by, is her own mind.” 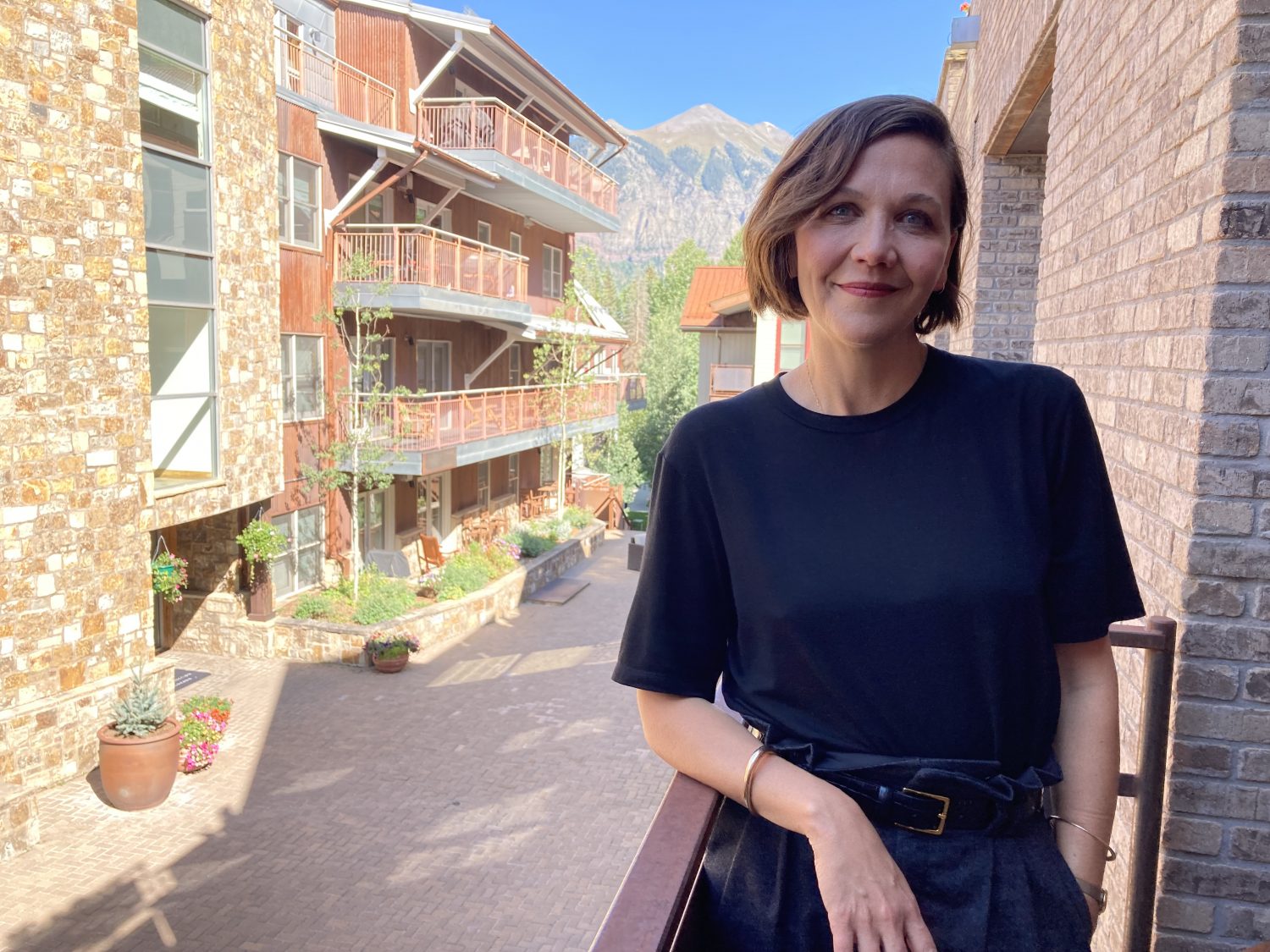 Any woman who has worked while raising a child will have sympathy for Buckley’s Leda, tormented by coveting career kudos as she faces the demands of her needy kids. But most women don’t make the choices that she made. It was important to cast Colman, who could bring some lightness and comedy to the dark material, Gyllenhaal said. “I need an actress who is fundamentally sane, who is not crazy. Because if you have a woman doing these aberrant things, we are so used to having that be an indication that she’s crazy, she’s abusive. And that’s not what we’re saying. What we’re saying is, ‘Everybody has these feelings. This is all of us.’ If Leda’s crazy, then what’s the point of watching the movie? We indict her, pat ourselves on the back for what great moms we are, and we move on. But if she’s not crazy, then hopefully, we’re asked to look at the ways in which we relate to her.”

Inspired by the happy/sad Giulietta Masina in Fellini’s “Nights of Cabiria,” Gyllenhaal takes her character right to the edge before she is redeemed. “Same with David Lynch,” said Gyllenhaal. “Right down to the deepest, deepest pain is sometimes where you find life!”