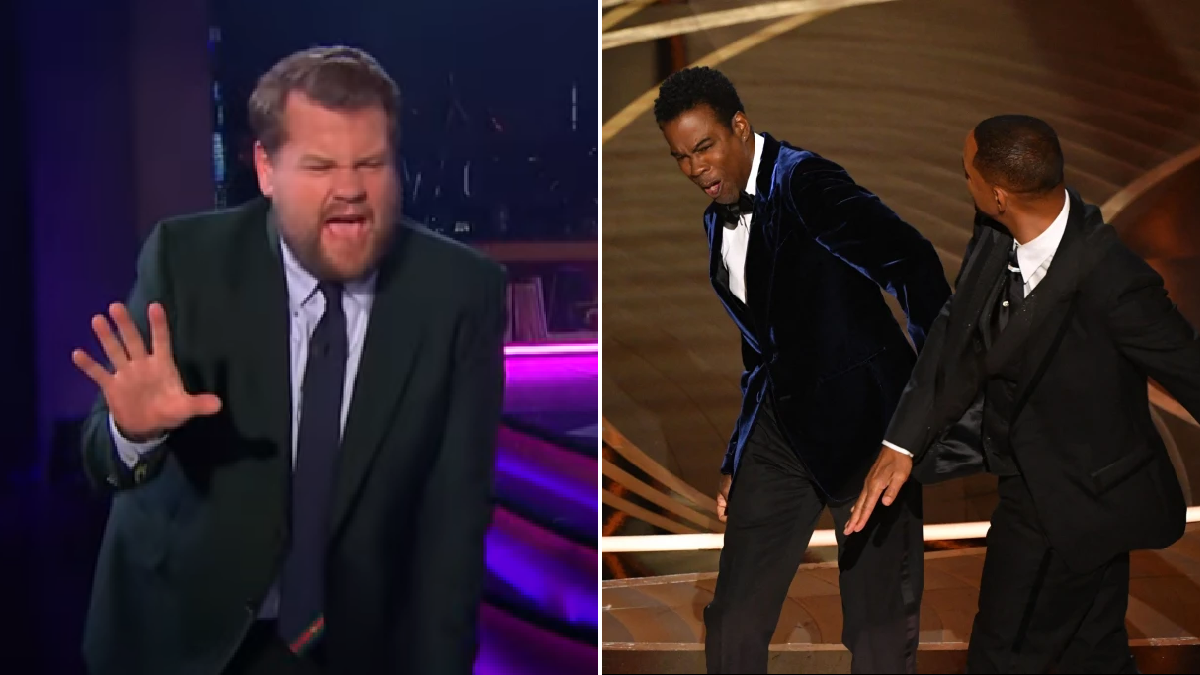 James Corden has mocked the Will Smith and Chris Rock Oscars drama through the medium of song with a hilarious Encanto parody.

It all kicked off at Sunday’s Academy Awards when Smith hit comedian Rock rin the face after he made a joke about his wife Jada Pinkett Smith’s hair.

The King Richard star has since issued a public apology to Rock, calling his behaviour ‘unacceptable and inexcusable’.

Gavin And Stacey comedian Corden seized the opportunity to have a bit of fun with the whole debacle and opted to put his own spin on the hit track We Don’t Talk About Bruno from the Disney film Encanto.

During Monday night’s Late Late Show, Corden sat down with his producers to discuss what standout moments from the Oscars to talk about on the episode.

‘We don’t talk about Jada, no, no, no,’ he stated after his colleagues attempted to bring up Smith storming the stage and assaulting Rock.

‘You saw what happened, we have to talk about something else,’ he insisted.

‘James, we have to acknowledge…’ a colleague then tried, but James interrupted and stressed: ‘No, we don’t talk about Jada, no, no, no.’

He then broke into song, with lyrics including: ‘Will Smith rose up from the floor/ Second time that night/ No one in the room was bored /I know what comes next but anyway/ We don’t talk about Jada.’

Viewers were in hysterics over the sketch, with one writing: ‘This is the most appropriate response I’ve seen and this song is an absolute banger. James and team you’ve done it again!’

‘This is just genius, and the fact that they had less than 24 hrs to come up with this and sing in it is amazing,’ wrote another, as a third added: ‘This has to be the most creative reaction I’ve seen.’

Smith made a public apology following the slap on Monday, saying that Rock’s joke about his wife’s alopecia had caused him to react ‘emotionally’ but ‘violence in all its forms is poisonous and destructive’.

In a statement posted to Instagram the actor said: ‘I would like to publicly apologise to you, Chris. I was out of line and I was wrong.

‘I am embarrassed and my actions were not indicative of the man I want to be. There is no place for violence in a world of love and kindness.

‘I deeply regret that my behaviour has stained what has been an otherwise gorgeous journey for all of us.’

Smith concluded his apology by saying: ‘I am a work in progress.’

Smith has been condemned by the Academy as it launched a formal review into his altercation with Rock during the Oscars ceremony.

Rock had compared Smith’s wife – who suffers from the medical condition alopecia – to ‘GI Jane’.

The incident overshadowed a night which saw Coda, which features a predominantly deaf cast, named best picture, while Troy Kotsur made history as the first deaf male actor to win a gong.

Smith, who won his first Academy Award for King Richard, appeared to take offence to a gag Rock made about Pinkett Smith’s short haircut.

The Magic Mike XXL star and Red Table Talk host has previously spoken about her struggles with alopecia and said it is what prompted her to shave her head.

However, Smith walked up on stage and hit Rock before returning to his seat and shouting twice: ‘Keep my wife’s name out of your f****** mouth.’

The altercation left Rock shocked and flustered as he tried to resume presenting the best documentary feature category.

James Corden’s Late Late Show airs on Mondays on NBC in the US.