Skip to content
HomeTV and MoviesJamie Covers Up a Murder as Claire Changes the Course of History on Outlander Season 5, Episode 5

There’s no easy way to say it, but Jamie killed someone and covered up his crime during this week’s episode of Outlander. But he also rescued an adorable baby kitten and gave it to Claire, so it’s not all bad! Meanwhile, Roger and Brianna made a major decision about their future and Claire casually invented penicillin, so let’s get right to it because there’s a lot to discuss—especially re: our new kitten friend.

Claire Changes the Course of History

This week’s episode spent a lot of time with Past Claire in Boston, where she comes to terms with the death of a patient who has an allergic reaction to penicillin. But his death set off an important chain of events in Claire’s life: her trip to London with Brianna, her subsequent meeting with Roger, and the discovery that Jamie is alive. What remains to be seen is if the lessons of Claire’s past life in the future will impact her present life in the past (help, my brain). Especially considering she just succeeded in making penicillin, changing the course of history in the process, and potentially opening up Outlander to other historical anomalies ahead.

Either way, Claire is willing to take the risk, and immediately puts her penicillin to the test at Fraser’s Ridge by performing surgery on one of the twins with infected tonsils. Looks like the procedure goes well, but it definitely seems like Claire is playing with fire …

^ Me, worried about Claire being out of her depth.

Roger and Brianna have a lot of secrets in their relationship, but this week they all come to the surface thanks to Roger discovering the diamond Stephen Bonnet gave Brianna for Jemmy. While Roger’s initial confrontation with Brianna over the jewel doesn’t go great (he reacts pretty poorly to Bonnet being told he’s Jemmy’s father), fear not—Claire fixes everything, per usual!

During a heart-to-heart in the woods, Roger asks Claire if she regrets lying to Brianna about her real father for so many years. Claire’s answer? Nope. She explains the important thing was Brianna feeling safe and loved, and that Bri wouldn’t have been ready for that kinda info as a child. In other words, bending the truth isn’t always a bad thing.

With this advice in mind, Roger gathers up some apology mushrooms (who needs flowers when fungi are around?!) and tells Brianna that he’s sorry for everything. In return, she comes clean about one more thing: Bonnet is still alive, and she’s pretty sure he’s coming for Jemmy. Their plan of action? To use Bonnet’s diamond as their ticket to the stones so they can get back to this vibe:

While everyone else is busy with moldy bread and mushrooms, Jamie is still wandering around the country gathering men for his militia—but plot twist: he runs into Lieutenant Knox, who has a couple updates: 1) the governor plans to pardon all the Regulators except Murtagh, 2) he plans to personally hunt Murtagh down, and 3) he’s expecting a letter listing all the prisoners from Ardsmuir. Which, um, is unfortunate because Jamie’s name will definitely be on said list. 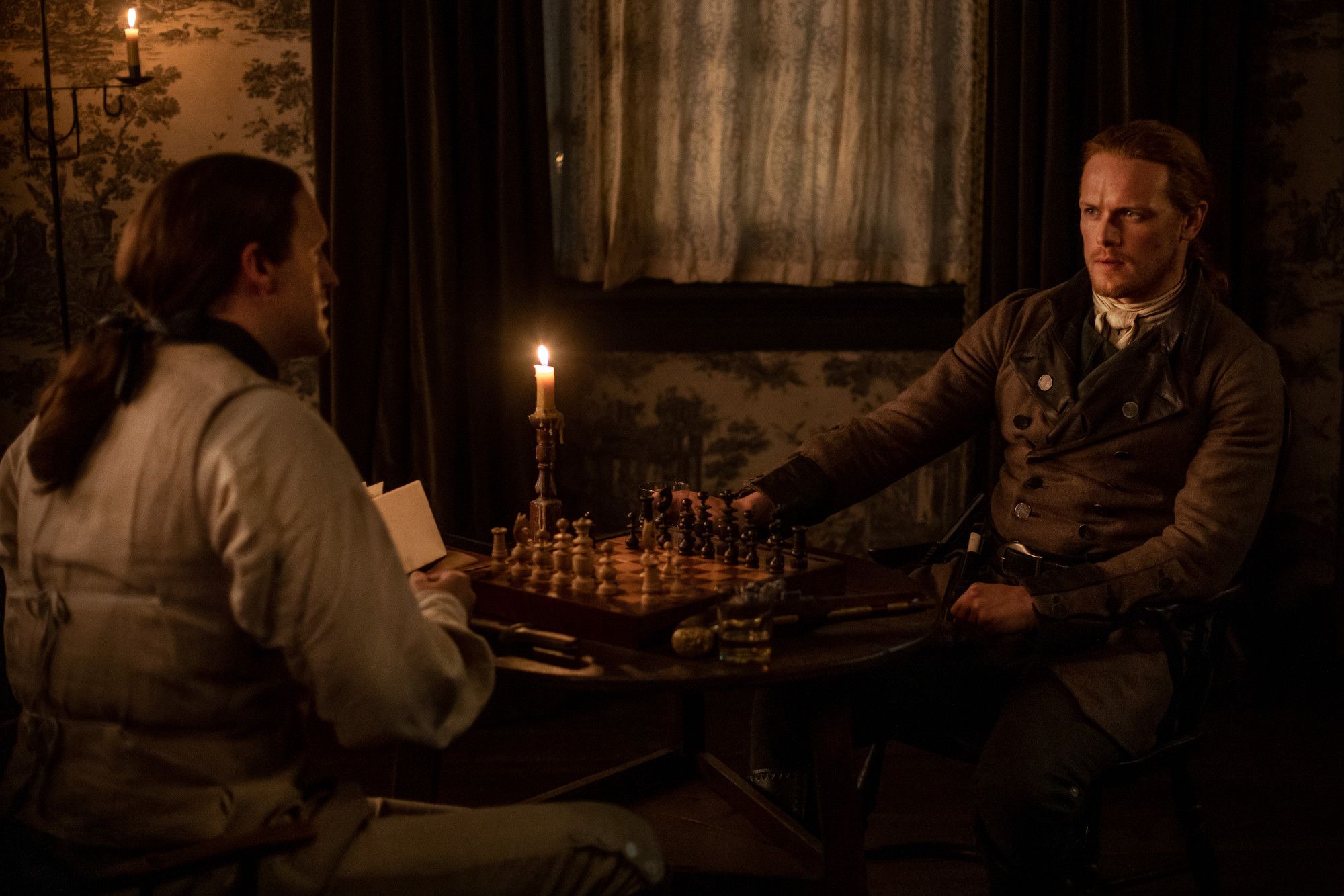 Things hit a boiling point when Jamie and Knox sit down for a friendly game of chess and the prison list just happens to be delivered. To his credit, Jamie comes clean immediately and tries to convince Knox not to spiral, but unfortunately Knox threatens him with a knife. So in a pretty extreme move, Jamie strangles Knox to death, burns the inmate list, and then stages Knox’s body to look like he died of smoke inhalation. Problem solved, I guess?

But on a happier and much cuter note, the episode ends with Jamie showing up back at Fraser’s Ridge with my new favorite character: a kitten. I swear to god if anything happens to this furry friend I’ll personally travel back in time through the nearest available stone and seek justice.