The pensioner was overcome with emotion when speaking to GB News presenter Will Hollis at The Royalist Pub in Market Harborough. Will spoke to people in the pub as GB News played footage of Prince Harry, King Charles III and other members of the Royal Family taking part in a Vigil of the Princes as the Queen lies in state at Westminster.

“We have come to The Royalist pub because there are lots of people who have been watching what’s been going on,” the presenter began before adding: “And a lot of people who have actually got memories of the Queen’s impact on their life.

“And one of those people is Pete, who’s just over here, in this corner.

“What’s this one that you’ve got here that relates to the Queen’s Coronation?” 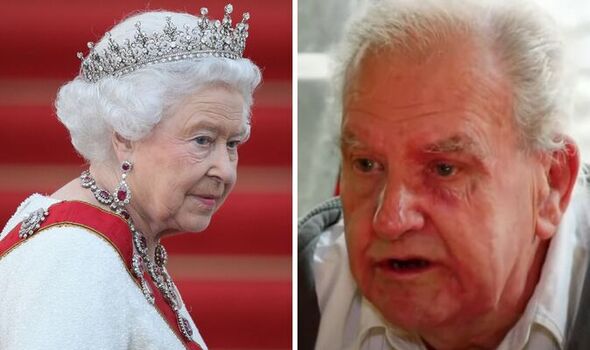 “This Coronation medal was presented to me on Coronation Day in 1953,” Peter recalled.

“I was roughly one year…two years and nine months old at the time.

“Whether other people were presented with it at the time, I don’t know.

“I think this was from a street party in my area which was Cheshire.”

Pointing out the fact Pete had held on to the medal for so many years, Will continued: “Watching what is going on… the precession and the Queen lying in state, what does that mean to you and people here in Market Harborough?”

“To me, it means one hell of a lot,” Peter replied. “I served The Crown for 27 years, which spanned over four different decades.”

With tears in his eyes, the pensioner got emotional as he added: “I am a royalist.

“I loved the Queen and now hoping to love the King,” he added with a lump in his throat.

Will also spoke with pensioner Phil about his own memories of the Queen before she was on the throne.

“They’re not particular very vivid memories,” he told Will. “But technically I was born when there was a King on the throne.”

Turning his attention to King Charles III, he continued: “I think King Charles is going to be a remarkable King.

“I think over the past few days we have seen a really significant change from Charles, Prince of Wales to King Charles III.

“I have great hopes for him, he is going to be fantastic.”

“It just shows how well we can do these things,” Phil went on to add when chatting about the coverage of the Queen’s death and her funeral.

“I have two memories of the Queen really, one was a schoolboy which would have been in the 50s.

“Secondly, I was fortunate enough to be presented to her at Buckingham Palace.”

GB News airs daily from 6am.