The shape of Alex Thompson’s winning “Saint Frances” is familiar enough: a disaffected and unattached millennial finds purpose and meaning in an unexpected connection with a spunky kid who forces her to grow up and face the real world in all its terrifying glory. Cute kids are easy outs in modern cinema (“do you know that the human head weighs eight pounds?”); so are ennui-laden young adults more adept at scrolling social media than carving out a career, but Thompson and “Saint Frances” writer and star Kelly O’Sullivan turn their premise into something wise and witty.

O’Sullivan (who makes her feature screenwriting debut while also leading the film, appearing in every scene), is a real find, the kind of “voice of a generation” talent who spends less time talking about her genius insight and more time simply delivering on it.

At 34, Bridget is unmoored: no house, no partner, no career, no direction. Her low-simmering disaffection and barely disguised fear of not making her life count are thrown into sharp relief during the film’s opening credits, illustrated by a party sequence in which a stranger literally (and amusingly) unpacks his own, similar terror. When another party guest, the sweet-faced Jace (Max Lipchitz) catches Bridget while she’s still reeling from the accidental insight of her last conversation, the pair fall into a one-night stand that gradually turns into something bigger. But Bridget’s biggest problem isn’t that she’s flailing; it’s that she’s resistant to grabbing on to the very people and things that might help save her. Enter Franny (the charming Ramona Edith Williams).

Bridget doesn’t go looking go for nanny job because she loves kids (she doesn’t even like them) or because she’s inundated with Instagram feeds filled with friends and their babies and she wants a taste (or does she?). She just needs a job. O’Sullivan and Thompson cleverly lace in character details with tongue in cheek touches that are as funny as they are timely. The first thing Bridget (and the audience) sees on her first visit to her potential employers: a large Black Lives Matters lawn sign, which initially scans as performative. The first interaction: a giant hug, before even preliminary introductions are out of the way. Bridget thinks she’s got them pegged, but O’Sullivan’s script gracefully handles all of its characters, turning easy jokes into real people.

Maya (a lovely Charin Alvarez) and Annie (Lily Mojekwu) are about to have their second kid, and they’re looking for a summer nanny for their whipsmart first-born Frances, who can barely hide her disdain for Bridget. Maya and Annie aren’t too impressed either — Bridget can’t help being honest about her intentions, a trait that’s charming and off-putting in equal measure — and she doesn’t get the gig.

Meanwhile, her burgeoning relationship with Jace has created her own crisis of potential parenthood: She’s pregnant. O’Sullivan and Thompson take on Bridget’s ultimate decision with honesty and intention, approaching the abortion process with the same care they apply to the rest of the film. 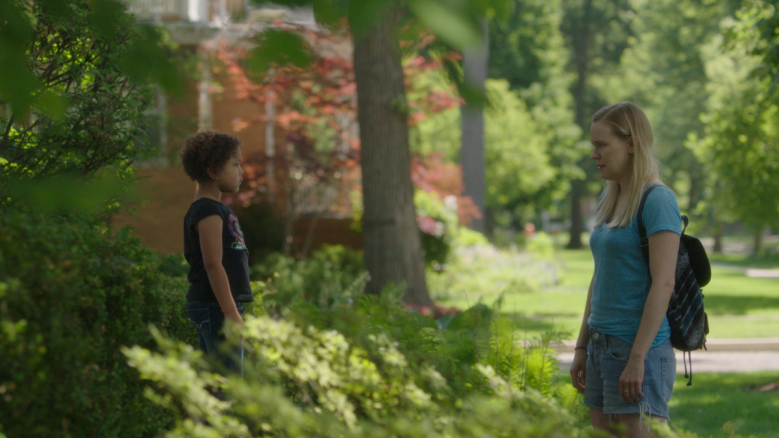 When the buttoned-up Maya and Annie find themselves at loose ends, Bridget is called back to assist. Both moms struggle, but it’s Frances who’s most shaken: like Bridget, she’s disaffected in her own way, and the confusion and pain she feels over her new sibling is startling relatable. Williams is an unmitigated star in the making, taking the “precocious kid” trope and running with it, allowing her bossy Franny (hell, Bridget could use the bossing) to feel like a real kid. Of course, Bridget falls in love with her.

Yet Thompson and O’Sullivan don’t make it easy going, with the bond unfolding in fits and starts as the film’s two leading ladies learn their way around each other, and themselves. Neither are perfect, and O’Sullivan projects such deep empathy that even when Bridget fucks up, it’s difficult to stay angry at her. (Lingering effects from her procedure will send audiences screaming to just go to the damn doctor, while her dad sends her off with a demand she get her oil changed, knowing she’d never think of it on her own). When an old frenemy tells Maya how everyone thought Bridget would be “the next Sylvia Plath!,” Bridget sagely grumbles that she’s still got the depression to back it up.

Eager to utilize its strong supporting cast, the final act of “Saint Frances” digs more deeply into other dramas, biting off more than O’Sullivan and Thompson can chew in the process. Maya and Annie’s oppositional approaches to Bridget grow into something deeper and darker, and while the bigger questions it broaches (particularly about mental health and societal strains) are welcome, they often feel like just a neat way to tie up Bridget’s own issues. It’s unnecessary: O’Sullivan and her creation are riveting, and when the film comes to an emotional end that hinges on all its early strengths, the result is satisfying and hard-won, a coming-of-age story told on just a slight delay.