Skip to content
HomeTV and MoviesSEAL Team Boss Unpacks the Season Finale's Highs and Lows, Looks Ahead to 'Grittier' Times on Paramount+

In SEAL Team‘s Season 4 finale, Bravo returned from their latest deployment with both a heavy, collective heart — Full Metal (aka Scott), they learned, had perished from the injuries he sustained in protecting his brothers from an incoming RPG — and much personal business to tend to.

Ray, for example, was nudged by Jason to seek therapy (alongside Bravo 1), after which he finally detailed for estranged wife Naima the horrors to which he had been subjected months prior. Clay’s reunion with Stella seemed to be heading for sadness, as he spoke of Ray and Naima as a cautionary tale, but then he flipped the script and proposed marriage — and we even got a city hall wedding/Bulkhead reception!  Sonny and Lisa pondered their futures, individually and together, as he plotted a move to be closer to his newborn daughter. And as for team leader Jason, the events of the season as a whole (if not the RPG blast) seemed to catch up with him at the Bulkhead party, where he abruptly ended a chat with Clay, claiming “headache.”

TVLine spoke with executive producer Spencer Hudnut about the finale’s major happenings, as well as what the future holds for SEAL Team with its eventual, early Season 5 move from CBS to Paramount+.

TVLINE | For starters, we have to talk about Jason’s “headache.” What’s going on there?
Well, I think it’s just a reminder that Jason is at an age where, as much as he’s evolved this past season, there’s a good chance we’re going to see a more balanced version of both Bravo 1 and Jason, a bit closer to the guy that we saw in the flashbacks in the first episode of the season. This guy’s been fighting this war for 20 years, and I think the question is: Will he be able kind of outrun all of that combat and all that trauma, even as he improves as a human being? There’s just a hint of maybe a dark cloud hanging over him as Jason moves into the next phase of his life.

TVLINE | So are you not hinting at a TBI?
There’s definitely a world where that’s open to interpretation, because he did just come off the battlefield and had an RPG blow up close to him. It could just be from that blast, but as you know, he’s been exposed to a number of head traumas and we know what that potentially leads to in operators. At this point, it’s obviously more than just a “headache.” 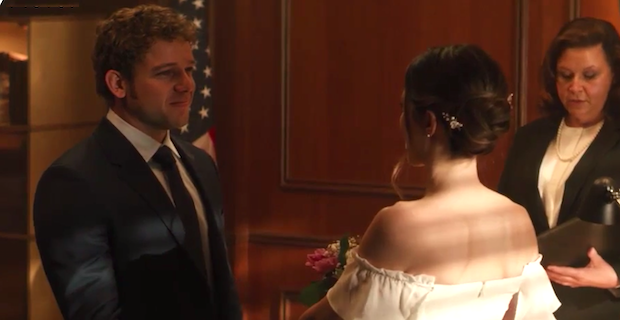 TVLINE | I like what you did there with Clay and Stella. I was about to give that boy a firm talking-to when you totally zagged on us.
Oh, yes. Clay’s journey really wasn’t about “Is Stella the right woman for him?” He’s committed to this job, but the question is, is it fair to drag someone into this life — having seen, from his parents and from Jason’s experience — the collateral damage that come with being an operator, away from the battlefield? That was a callback to when Stella broke up with Clay in Season 2, in the car, at the airfield, and in that moment I think Clay was still figuring it out. But sitting across from her, contemplating life without her, he realized that that would be the wrong path. 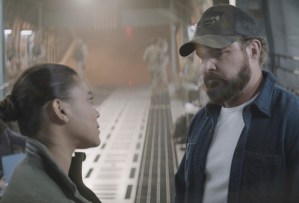 TVLINE | Should we be worried about losing Sonny and maybe also Davis to Texas?
Sonny has come such a long way this season, and in that moment where he held his daughter for the first time, he felt that true connection. For a guy whose happy place it to be outside the wire, I think he’s now probably rethinking that. And as he said to Davis, he really is in a tough spot — the daughter he loves is thousands of miles away, and the woman he loves is across from him at work every day but they can’t be together because of that work. So, I think that for him to make the equation of happiness work, that’s what he lays out for Davis there — the idea of the two of them in Texas, with his daughter. He’ll be feeling that gravitational pull, for sure. 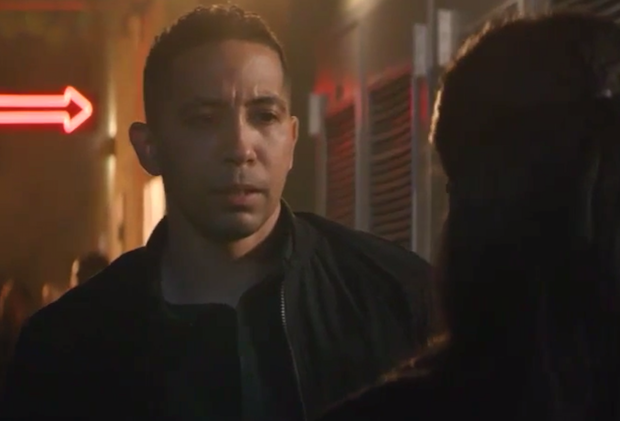 TVLINE | You put Neil Brown Jr. through such a wringer this season. When did you give him a heads-up how rough it was going to be?
He knew at the end of last [season], because what aired as our second episode this year was supposed to be last season’s cliffhanger, with him getting blown up. I definitely let him know when he read that script that he was not dying, but that there was a lot coming his way.

What I didn’t quite realize was that, obviously, the big moments were so difficult, but even the moments with his wife, and holding things back from his best friend, and hiding things from the team, how hard that is on the character. Neil did such an amazing job this year, and what he delivered in the finale — in those emotional moments when he finally admits what he’s combating and what he’s been in denial about, and then is able to tell his wife some things he didn’t want to tell her, for so long — really blew us all away.

But yes, Neil very good about reminding me how hard we’ve been on Ray. [Chuckles]

TVLINE | It’s a bit superficial, but him opening up to Naima while clean shaven and baby-faced added to his vulnerability in the moment.
Absolutely. It’s one of those things where I wish we had thought that far down the road, but when I was on set, and Chris Chulack was directing that scene, to see Neil and how innocent he looks without the beard, it does add another layer to it. He in that storyline did a great job of helping destigmatize everything about PTS by admitting that he needs help, which was kind of the theme of the season. Really, none of us can get through this on our own, and David [Boreanaz] and Neil [in the therapy scene] were both so fantastic. I think they really crushed that. 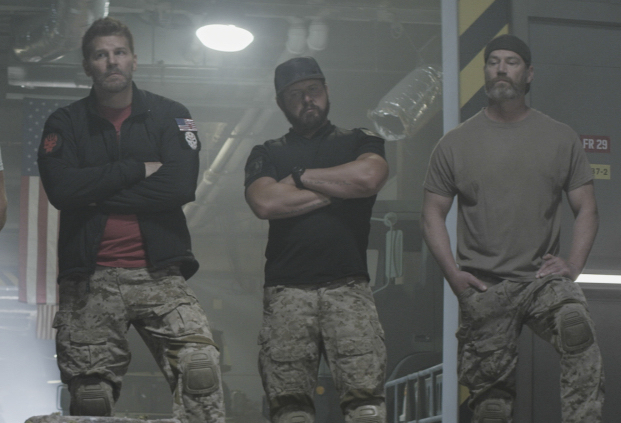 TVLINE | The immediate aftermath of Full Metal’s death raised a question for me: Do operators like this leave behind letters, just in case?
They really are prepared. They know that any time that they go out to work, they might not come back. It’s like what Jason told Sonny in 412, which was kind of a humorous moment, that Sonny needed to get his will in order now that he’s going to have a kid. I mean, they always have to be ready for this. And having a specific request, like how Metal wanted to be buried at sea, is common.

I would like to add that Scott Foxx, who plays Metal and is a former SEAL, even though his character is dead he’s going to stick with the show. He’s going to be there every day with us in an advising capacity and a double capacity. I know people are obviously worried about not only the character but the actual man. 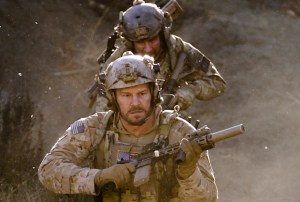 TVLINE | As actor-directors go, I feel like not only does David Boreanaz direct the hell out of his episodes, but he’s not being given easy ones!
Oh, definitely not. In fact, the second-to-last episodes every year tend to be the hardest, the most “outside the box.” [Last week] we had Blackhawks flying around, we had so many moving parts to it. And on top of that, he had to be the emotional center of that episode. No, he definitely has his hands full, and he totally embraces it. We saw that with the premiere this season [which Boreanaz directed], when we went up in the snow…. That was David really driving the bus, saying, “No, we can do this, we can do this.” He inspires and gets the best out of everybody, whether it’s the actors or the crew, even the writers. I make it a point to always write or co-write one of his episodes, because they’re never formulaic. They always have some complex issue at the heart of it. Yeah, we definitely like to throw him some curveballs.

TVLINE | Production-wise, do you feel like the show has gotten back to “normal” following those early stages of the pandemic?
By the time we got on deployment and on the ship, it really did feel like the show was back to normal. Keep in mind, these last two episodes were huge, so  I can’t say that that’s going to be the norm moving forward, but I think we learned a lot this year and, especially moving to Paramount Plus, I would say the last five or six episodes really were what SEAL Team is going to look like moving forward.

TVLINE | Do you have a sense of any particular “pros” in moving to Paramount+?
Streaming is the future, so I think it’s exciting for the show to have the off ramp. And I think it’s great that CBS is giving out [Season 5’s] first four episodes to transition, to really get people excited. And I think it will allow us to tell grittier stories. We’re not going to reinvent the show in any way, but I think we can get a little more real. I think we can be even more authentic, which is what we pride ourselves on.

TVLINE | Do you think you might end that fourth episode on CBS with a cliffhanger, to kind of twist people’s arms?
I think that’s probably a good idea. When we go to launch on the platform that week, we’re definitely going to want to try to motivate people to have to see what happens next.

Want scoop on SEAL Team, or for any other show? Email [email protected] and your question may be answered via Matt’s Inside Line.