Skip to content
HomeTV and Movies‘Star Trek: Picard’ Review: Our Ex-Locutus Returns to a Borg Cube and Plays the Hero This Time

It was a dark and stormy night. At least in the strange dream that opened “The Impossible Box,” a dream Soji’s been experiencing for some time and may hold the key to where she really comes from.

It was also a dark and stormy episode of “Star Trek: Picard.” “The Impossible Box” pushed the narrative forward considerably after the rip-roaring detour of Seven of Nine’s rampage the previous week. But it did so not through explosive action but instead through thoughtful character turns: it feels like a lot more happened here than really did, and even those seismic events are moments we could have called well in advance — Soji realizing she’s a synth, Narek getting what he wants from her then, at last, casting her aside, Picard setting foot on a Borg cube once more. But what’s striking is that even though we saw all these moments coming episodes ago, they were still powerful to watch. “The Impossible Box” was an exceptionally well written (by Nick Zayas) and directed (by Maja Vrvilo) installment. It wasn’t perfect: but the thrill here was not so much in what happened, but how it happened.

The biggest misstep in “The Impossible Box” occurred right up front: doing very little to capitalize on the big reveal from the previous week that our robotics expert Agnes Jurati has been charged with a mission to sabotage Picard’s own — and possibly kill Soji. She killed her lover Bruce Maddox, the person the crew had been trying to find the whole season, in a stunning twist. There’s almost no follow-up in this episode to that other than to see that doing the worst thing Agnes could possibly imagine has somehow freed her up, liberated her. She makes quite the pass at Rios, while he’s shirtlessly giving a soccer ball a workout. (What did she do to the EMH that knew about her crime? Did she erase him?) And well, that’s it. Balancing a large ensemble is tough… but this was sloppy. Luckily, the rest of the episode was so strong. 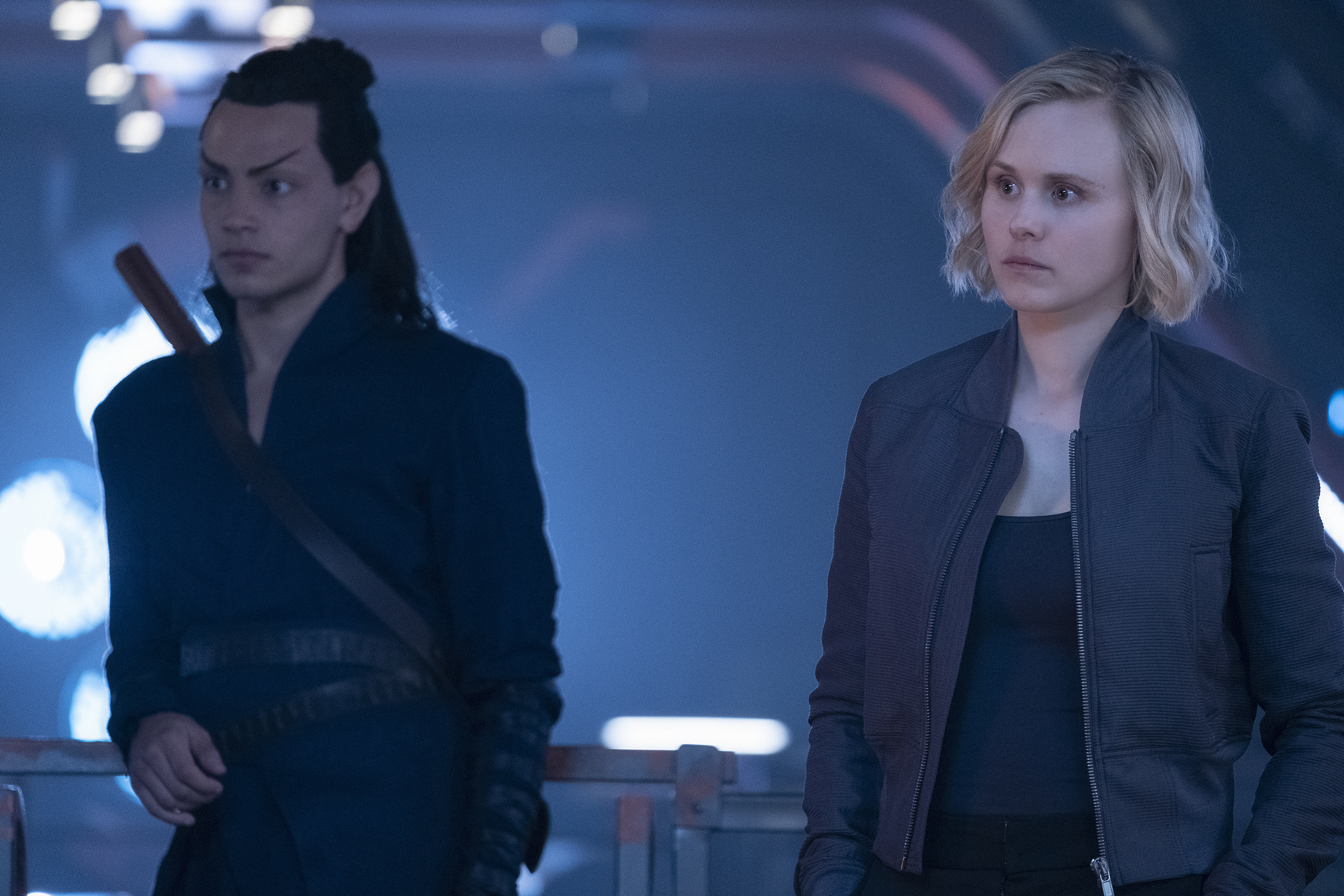 Elnor seems to sense that Dr. Jurati is hiding something, though he doesn’t seem to be certain of what.

Starting with maybe the single best image this series has given us to date: Picard, anticipating the first time he’s been on a Borg Cube since he was assimilated over 30 years before, looking at a holo of his Borg self — Locutus. The Picard of the present seemed to merge, “Persona”-style with the altered Picard of long ago. Just as he never fully regained his humanity after he was freed, he never lost all of the Borg inside him.

On that Cube, the slow-simmering subplot of Narek trying to figure out where Soji was created (so as to find others like her and kill them) finally started to heat up. Narek talks through with his sister — after demanding back his Romulan Rubik’s Cube called “an impossible box” — why Soji might need to dream. Everything in an android should be pre-programmed, so if she dreams that could be her processing unit trying to reconcile the fact that she’s an android but has been giving programming to believe she’s human. And that this is a memory that reveals the truth to her that’s otherwise been suppressed. Heady stuff, but leavened with the high cheekbones and high camp that tends to define all interactions between Narek and his sister.

Picard will face an uphill battle once he’s on this cube, but first there’s the matter of just getting aboard it. Deception won’t work — no eyepatches or comical French accents. He’ll need Federation diplomatic clearance. So Raffi, still nursing her hurt over her son’s rejection the previous week (who knew that would be the plot point last week that would be more effectively followed up on this time around?) and drowning her sorrows in a bottle has to pull it together to pull some strings with a Starfleet pal. She puts on some perk, makes the call, and convinces her reluctant acquaintance to give her that clearance. Actually, this was a pretty effective illustration of the way addiction and depression sufferers can fake it and turn themselves “on” when they need to, collapsing into a ball right after, and the best insight into Raffi we’ve seen thus far. “No one gets all of it right,” Rios tells her after he takes her to lie down. What a lovely moment, beautifully acted by Michelle Hurd and Santiago Cabrera. Two people who’ve made a lot of mistakes in their lives, who are tormented by past traumas, having a moment of connection, in which they might be able to find some hope. That empathy? That’s “Star Trek,” regardless of how different this series might seem from the “Trek” we’ve known before. 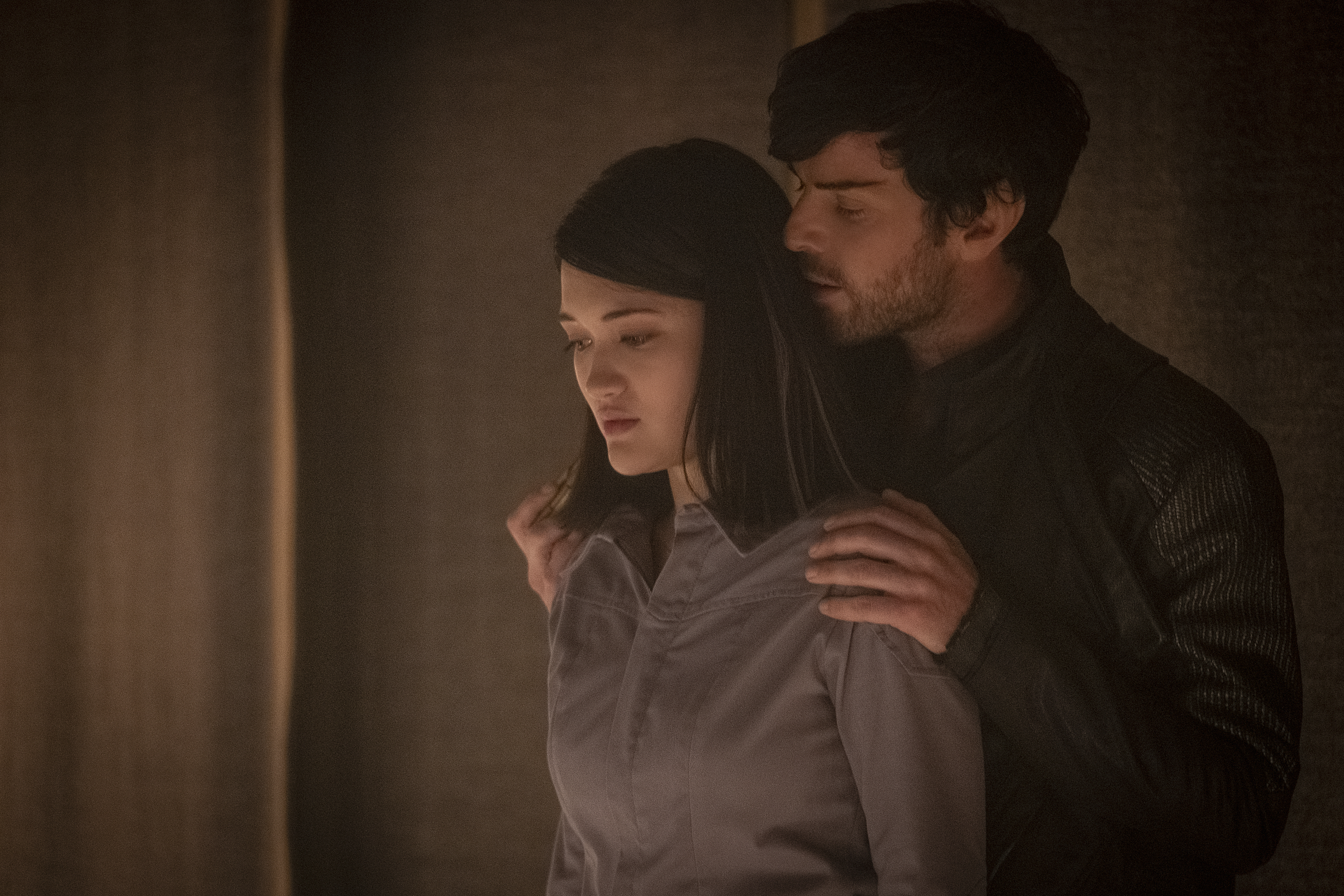 Avoid men who tell you, “You’re not real… you never were.”

Because Raffi got it done and did so with style, Picard is able to use that diplomatic clearance to beam over to the cube. He basically has a panic attack on the cube. He can’t stop seeing images of his past — and 30-year-old moments from “The Best of Both Worlds” and 24-year-old moments from “First Contact” (including the Borg Queen!) were edited in seamlessly to this far more high-toned show from 2020. That was really brilliant: it was like a day hadn’t passed from those stories, showing how fresh Picard’s wounds still are. A number of ex-drones come to his side. He thinks they’re trying to attack him, but they’re actually just ensuring he won’t fall. And then, there before him, is Hugh: the first Borg he ever saw, other than himself, who could leave the Collective and regain his humanity. A friendly face was just what he needed. But with that, came some revelatory truths from Hugh too: these freed Borg, even separated from the collective and allowed to be individuals again, are, simply because they were part of the Borg against their will, the most hated people in the galaxy. They have nowhere to go — some are probably on the other side of the galaxy from their homeworlds, others are likely shunned from their societies. Picard finally gets it: the vast majority of the Borg are victims, not villains.

Narek’s seeds of doubt have finally wormed their way into Soji’s mind: there was no record of her passage to the cube, her every phone call with her mom lasts just 70 seconds and ends with her falling asleep, and now she realizes all of her possessions, including apparently much-older family photos, are only 37 months old. To seal the deal Narek tells her his real name: Hray Yan. She agrees to join Narek in a chamber for a special Romulan meditation technique, the Zhal Makh, which may unravel the truth. It works: she sees herself as a doll in pieces on a table — one of the creepier Trek images since Troi was turned into a cake — and two blood-red moons in the sky above a planet with constant electrical storms. Narek and his sister have what they need to find the other androids. Time to take out the trash. Narek opens his impossible box, letting radiation out to kill her. 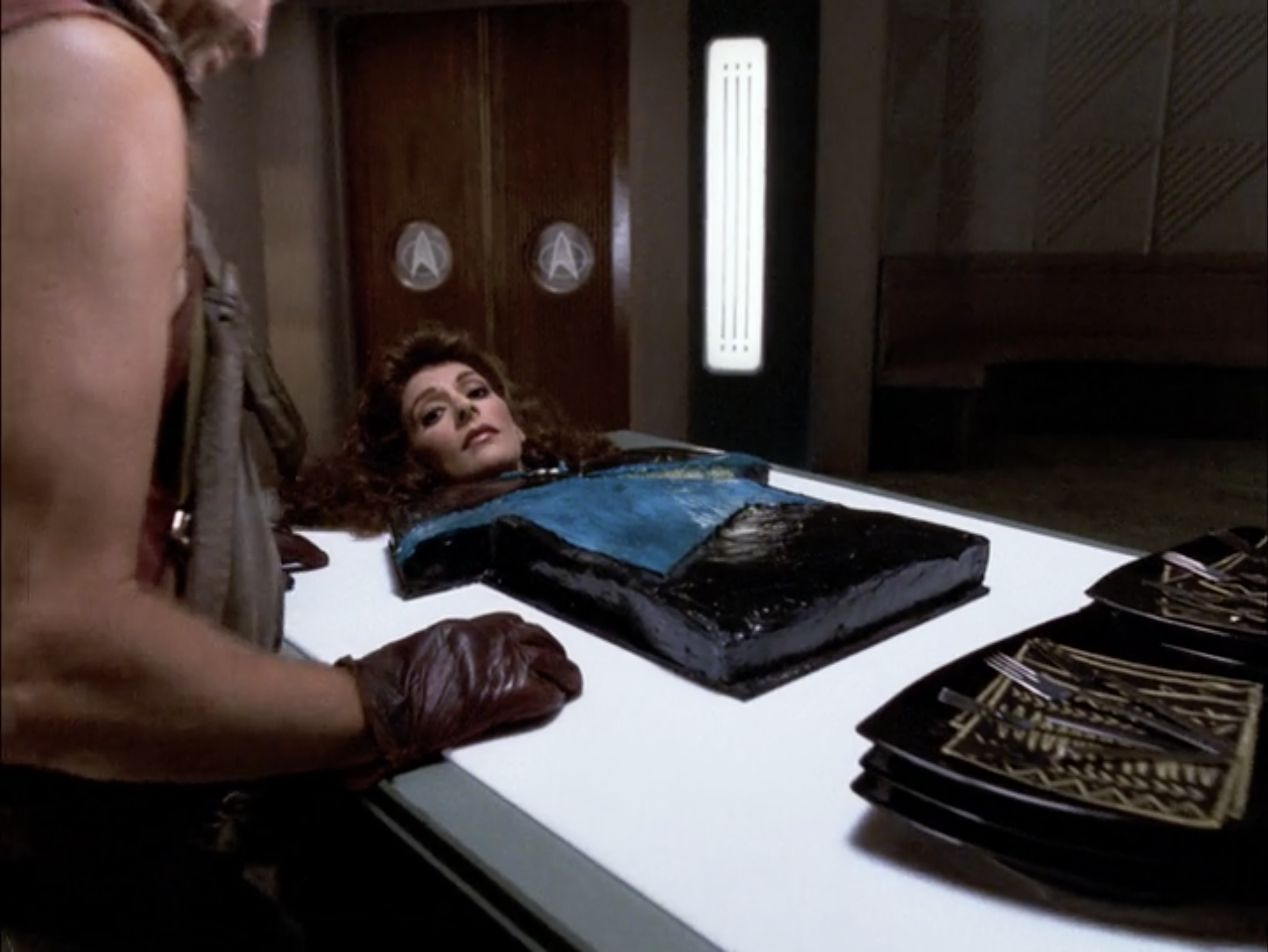 Tori has become a cake, with dessert plates and silverware nearby.

Finally her robotic abilities activate and she claws her way out of the meditation chamber and runs loose on the cube. She meets Picard and Hugh gives them a way off: a spatial trajectory in the Borg Queen’s very own chamber that she could use to instantly transport anywhere within 40,000 light years. It only works on an individual level – not for ships it turns out, as the U.S.S. Voyager discovered when they encountered the inventors of the tech, the Sikarians, in the “Voyager” episode “Prime Factors.” And it can show where they’ve gone. So Hugh agrees to stay behind and wipe their destination if Picard and Soji go through it. Soji has to take a leap of faith: she has no idea who this Jean-Luc Picard is. But he has a plan — to take her to the planet Nepenthe. (FYI, “Nepenthe” is the title of next week’s episode.)

And to buy Hugh more time to wipe their trail, who should show up but Elnor! Our lovably earnest Romulan assassin can hold off Narek and his pursuers while Picard and Soji escape. They jump through the portal and the last thing we hear in a fade to black is Elnor saying: “Please my friends, choose to live.”

What a cliffhanger. We literally have no idea what could be coming up next on Picard other than that Riker and Troi are supposed to show up before this season is out. Will we find them on Nepenthe? How can anyone on the cube stand up to Elnor? What will Hugh do now that this job has probably come to an end? (Here’s hoping we see more of Hugh. Jonathan Del Arco’s work here to evolve this character and make him that much more textured has really been incredible.) And what’s the goal now: just keep Soji alive or use her to bring back Data somehow? What if she really does turn out to be The Destroyer?

So many questions! And only four episodes to answer them all.