Skip to content
HomeTV and MoviesThe One Show derailed as Bill Bailey introduces pet cockatoo: ‘Who was that?!’

There were plenty of talking points to get through on tonight’s episode of The One Show on BBC One. Comedian Bill Bailey joined Alex Scott and Gethin Jones via video link to discuss the new season of Sky comedy The Long Run while singer Ellie Goulding discussed her newly released studio album. However, when the conversation turned to Bill, he was suddenly accompanied by his pet coackatoo, and it didn’t take long for the discussion to veer off from the plan.

Alex and Gethin had just finished showing viewers a special film on sheep-sheering, a practice which is currently being undertaken by shearers up and down the country thanks to the rising temperatures.

With animals on the agenda, Bill spotted the perfect opportunity to introduce his very own pet.

When The One Show cameras returned to the studio, Bill could be seen on-screen with his pet cockatoo, Jakob.

It didn’t take long for Gethin to spot the unexpected guest and he was quick to wonder who the bird was. 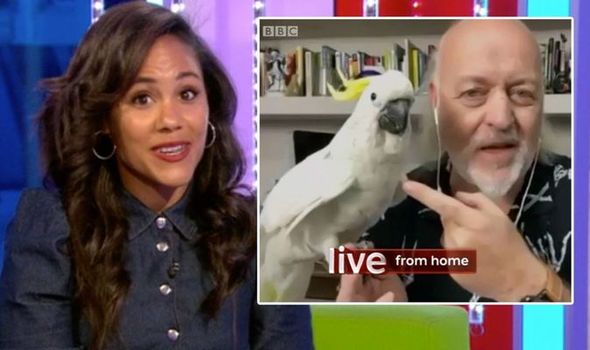 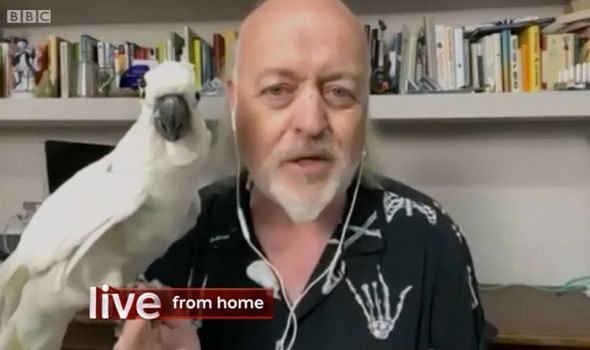 As soon as the shearing segement concluded, Gethin said: “Bill,

“I’m not sure you have any sheep but that’s probably the only animal you don’t have, isnt it?”

Shortly after, Jakob let out a squawk, taking The One Show hosts off-guard.

“Who was that?! Was that you?!” Gethin quizzed. 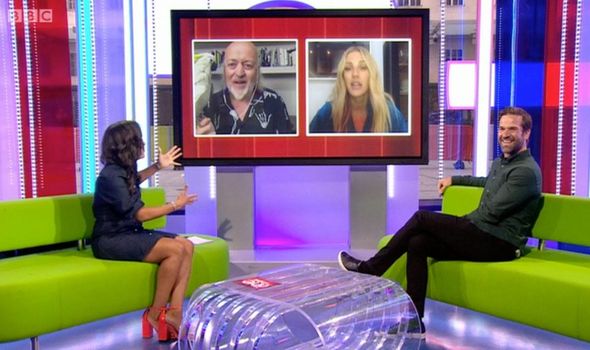 Bill then revealed: “This is Jakob, she’s a cockatoo and she’s been with us a long time,

At that point, Jakob stole the show as the bird lifted one of its talons as if waving to Gethin and Alex.

Bill said: “Wave, go on wave,” bringing laughter from the BBC One studio.

Trying to keep the show on track, Alex decided to ask Ellie about her new album, but Jakob wasn’t having any of it.

Alex said: “Ellie, from talking about animals, we need to discuss your new album,

“It’s out today, Brightest Blue, it’s been five years, you’ve kept us all waiting. What took so long?”

Before Ellie could answer, Jakob jumped in once more, letting out another squawk.

Ellie and the BBC presenters were left giggling before regaining their composure.

Jakob clearly made an impression on her One Show debut, with several fans tweeting their messages about the bird online.

One viewer said on Twitter: “Bill just chilling with his bird there [laughing emoji] #theoneshow.”

A second added: “The bird is stealing the screen #theoneshow #oneshow.”

With a third tweeting: “@BillBailey Bill, you have to post some videos of your gorgeous parakeet. Just seen The One Show & that bird is a born entertainer!”

The One Show returns on Monday at 7pm on BBC One.