It’s been over a year since audiences found out “Why Women Kill.” The first season, airing on then-CBS All Access, now Paramount+, followed three women from three different eras all with one goal in mind: Killing their husbands. The series, from “Desperate Housewives” creator Marc Cherry, had a similar bitchy cattiness that fans of the past ABC series loved, but the stories were varying shades of weak. A 12-month break seems to be what the doctor ordered as Season 2 finally showcases why Cherry’s shows are so compelling, settling in with one unified narrative and a shift in time period.

Where the first season took place in the 1950s, 1980s, and present day, this season sticks firmly in 1949 Los Angeles, a glittering world of glamour — for some. Alma Fillcot (Allison Tolman) is a lonely housewife whose prize possession is her garden. She dreams of joining the Elysian Park Garden Club, but can’t compete with the (thin) women of means, particularly Rita Castillo (Lana Parrilla). Unfortunately, Alma’s life is turned upside down by a revelation from her husband (Nick Frost) that opens up exposing everyone in the city’s secrets.

Retconning and streamlining certainly works to grand effect in this season of “Why Women Kill.” If you watched Season 1 there are a few references to the original, predominately having Jack Davenport, who played Karl Grove in the first season, act as narrator; ironically, the narration might remind you of “Pushing Daisies.” (Really, though, if you want to just dive into Season 2 you’re more than able to do so.)

Like “Desperate Housewives,” this take on “Why Women Kill” is all about ladies who lunch, gossiping and seducing in equal measure. You need a character outside of that who isn’t as exaggerated and gaudy, and Tolman is an absolutely perfect straightwoman in this series, bringing an empathy and vulnerability to the role of Alma that tempers the more highly charged women of the garden club. Alma certainly has her own problems that are just as high-concept, but her desire to belong is incredibly relatable.

Interestingly, what this season wants to push is the concept of inclusion, not necessarily with regards to race but body type. Both Alma and her daughter Dee (B.K. Cannon) are heavyset, and there’s much discussion about how, in a city so built on aesthetics, the pair stand out. Dee, especially, finds herself in a relationship with a good-looking man which leads to a speech where she talks about “owning” beauty as a heavy women in spite of how he treats her. 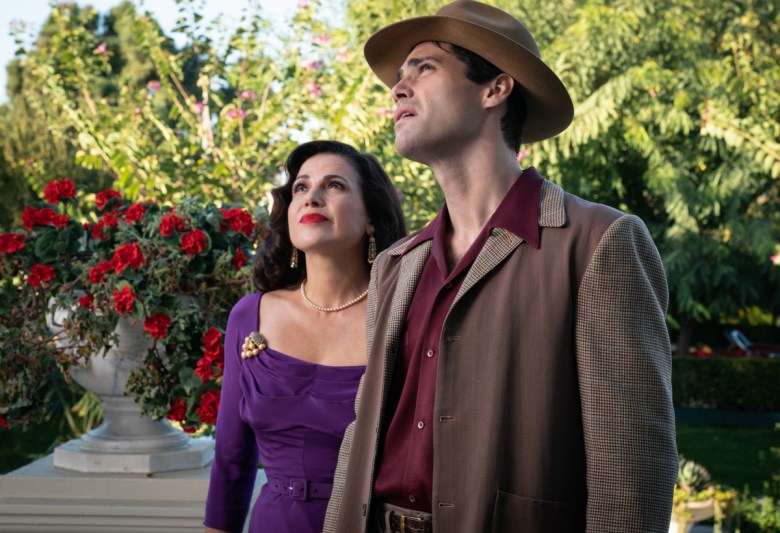 And while the emphasis on two white women and body issues feels a bit passé — though not necessarily for 1949 — there are characters of color in here who do try to make their presence known. Jordane Christie plays a private eye named Vern and, honestly, deserves his own spin-off. Not only are their far too few Black men in the gumshoe universe, but Christie is utterly magnetic, which only intensifies as Vern becomes closer to Dee. It’s also fantastic seeing Veronica Falcon as Rita’s angry stepdaughter show up, though the two don’t share enough scenes within the first half of the season.

But this wouldn’t be a Cherry show without some truly heinous women, and the Queen Bee around whom everyone revolves around is Rita Castillo. Lana Parilla is the ultimate neighborhood baddie as Rita, a gold-digging femme fatale whose Veronica Lake hairdo and glamorous dresses hide her black heart. Because she’s ripped from the 1940s noir world, her narrative borrows heavily from the likes of “Double Indemnity,” with her older husband being waylaid by a stroke.

She and Tolman have a heart-to-heart early on that shows the power of each woman to create a true friendship that’s ultimately ripped apart by the various plot conventions. The first half of the season nicely establishes all the various stories, ranging from outright murder to infidelity. It’ll be interesting whether things tie together in a perfectly impeccable bow or not — honestly, the series could probably pare things down even more to just Rita and Alma’s feud and still work.

There’s so much beauty in every frame, from the costumes to the production design —  and actors able to rise to the occasion — that it’s easy to ignore that the series isn’t necessarily stretching itself. Really, this is “Desperate Housewives” in the 1940s, and with so few primetime soap operas out there, that comparison immensely helps “Why Women Kill.” If you disliked the women of Wisteria Lane it’s doubtful you’ll find much to appreciate here. But if the first season of the show didn’t connect with you back in 2019, there’s no reason not to jump in with Season 2 and give it a second chance.

“Why Women Kill” is available to stream on Paramount+.