Roman Polanski won France’s Cesar Award for best directing for his film ‘An Officer and a Spy’, prompting a walkout by several women in the audience in protest at honouring a man facing rape accusations.

The ceremony took place in Paris on Friday amid protests by women’s rights activists as director Roman Polanski was awarded, in his absence, the best director award for his latest film.

Polanski decided to skip the Cesar awards ceremony because of protests by women’s groups denouncing the 12 nominations ‘An Officer and a Spy’ received after a French woman brought a new rape accusation against him.

At the announcement of Polanski’s award as best director, some boos emerged from the public, composed of film teams and cinema professionals.

Actress Adele Haenel, who recently denounced alleged sexual assault by another French director in the early 2000s when she was 15, got up and walked out of the room, followed by a few others. 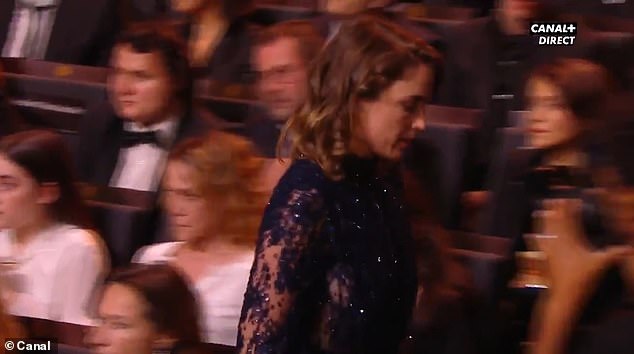 Actress Adele Haenel, who recently denounced alleged sexual assault by another French director in the early 2000s when she was 15, got up and walked out of the room, followed by a few others 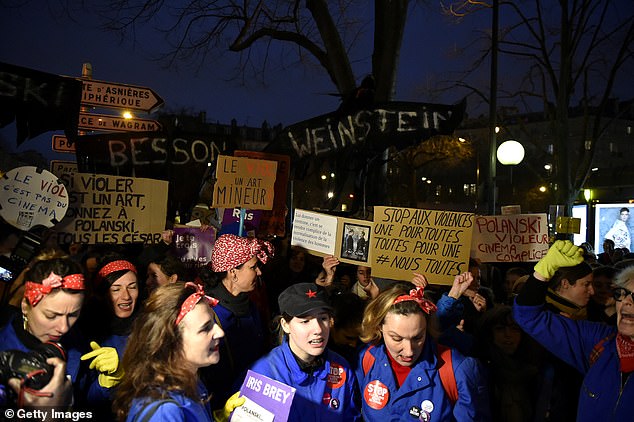 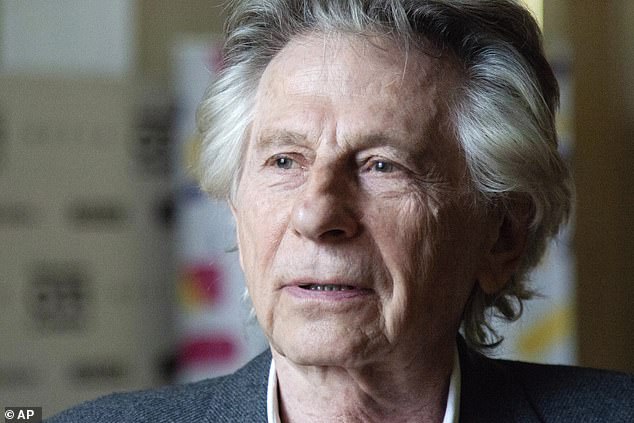 ‘Distinguishing Polanski is spitting in the face of all victims. It means raping women isn’t that bad,’ Haenel told the New York Times earlier this week.

The film’s cast and production team, including best actor nominee Jean Dujardin, also declined to attend the ceremony. Dujardin posted a message on Instagram that said, ‘By making this film, I believed and I still believe I made more good than harm.’

Polanski’s film won two other awards for best costume design and best adaptation. No one came on stage to accept the trophies awarded to ‘An Officer and a Spy.’

The show’s host, comedian Florence Foresti, left Polanski’s film out of her opening remarks when she mentioned the ones with multiple nominations.

Instead, Foresti referred to the 86-year-old director as ‘Atchoum,’ French for the Sneezy character in ‘Snow White and the Seven Dwarfs.’

‘I decided that Atchoum would not be big enough to overshadow the French cinema,’ she said.

The Cesar for best film has been awarded to ‘Les Miserables,’ Ladj Ly’s Oscar candidate, about tensions between police and minorities in a poor Paris suburb. The film won the Jury Price in Cannes Film Festival last year.

The entire male-dominated leadership of the Cesar stepped down recently amid disagreement over its decision-making structure and how to deal with the Polanski problem.

A few hundred protesters brandishing signs with phrases such as ‘Victims, we believe you’ and ‘No to impunity’ assembled outside the Salle Pleyel hall before the ceremony started.

In a statement this week, the Paris-based Polanski said the ceremony was turning into a ‘public lynching’ and that he decided not to attend the ceremony to protect his colleagues and his wife and children.

Polanski is still wanted in the United States decades after he was charged with raping a 13-year-old girl in 1977. He pleaded guilty to unlawful sexual intercourse with a minor but fled the country on the eve of sentencing.

Last year, a woman came forward to accuse Polanski of raping her in 1975 in his Swiss chalet when she was 18. Polanski denied it, and the allegations are too old for an investigation.

But the accusation put the director under fresh scrutiny in France, where he has long been revered as one of the country’s premier filmmakers despite the outstanding rape charge in the U.S. Other accusations have also emerged.

‘Is it normal for a man to rape and then 30 years later to be a star in popular cultures? No, it’s not normal, and a rapist should be in prison,’ another Osez le Feminisme activist, Fabienne El Khouri, said.

‘An Officer and a Spy’ is about the anti-Semitic persecution of French army Capt. Alfred Dreyfus and his wrongful treason conviction in the 1890s. It is among the best film nominees. Polanski has nominations for best adaptation and best director.

By the Grace of God − Directed by François Ozon

The Specials − Directed by Eric Toledano and Olivier Nakache

An Officer and a Spy − Directed by Roman Polanski

Portrait of a Lady on Fire − Directed by Céline Sciamma

Jean Dujardin − An Officer and a Spy

Melvil Poupaud − By the Grace of God

Swann Arlaud − By the Grace of God

Grégory Gadebois − An Officer and a Spy

Louis Garrel − An Officer and a Spy

Denis Ménochet − By the Grace of God

By the Grace of God − François Ozon

Portrait of a Lady on Fire − Céline Sciamma

By the Grace of God − Laure Gardette

An Officer and a Spy − Hervé de Luze

An Officer and a Spy − Alexandre Desplat

I Lost My Body − Dan Levy

An Officer and a Spy − Jean Rabasse

Portrait of a Lady on Fire − Thomas Grézaud

I Lost My Body − Jérémy Clapin

The Swallows of Kabul − Zabou Breitman and Éléa Gobbé-Mévellec

By the Grace of God − François Ozon

An Officer and a Spy − Roman Polanski

Portrait of a Lady on Fire − Céline Sciamma

Anaïs Demoustier − Alice and the Mayor

Adele Haenel − Portrait of a Lady on Fire

Noémie Merlant − Portrait of a Lady on Fire

Chiara Mastroianni − On a Magical Night

Josiane Balasko − By the Grace of God

Laure Calamy − Only the Animals

Luàna Bajrami − Portrait of a Lady on Fire

Adults in the Room − Costa-Gavras

An Officer and a Spy − Roman Polanski and Robert Harris

Only the Animals − Dominik Moll and Gilles Marchand

An Officer and a Spy − Pawel Edelman

Portrait of a Lady on Fire − Claire Mathon

An Officer and a Spy − Pascaline Chavanne

Portrait of a Lady on Fire − Dorothée Guiraud