After 212 days, my hair was going the full Mary Beard. Now, I feel shiny, clean and cared for, says ALEXANDRA SHULMAN after her first post-lockdown salon appointment

Scoring the very first appointment with George Northwood since lockdown began was way more exciting for me than winning the Derby. No competition. I even beat Alexa Chung: her appointment at the reopened salon was four hours later. It’s probably the first and only time I’ve beaten her at anything.

It had been 212 days without a haircut so, clearly, the situation was serious. Since I have long hair, it doesn’t need cutting regularly but, even so, this length of time was extreme.

My last visit was December 5 and, until yesterday, my hair was going the whole Mary Beard.

I’ve followed George from salon to salon for years now, and he’s the only person I trust. You’d think it was a small matter just to lop off an inch or so, but that’s not the case.

The fact that my pre-Christmas cut was still borderline serviceable is because he has taken such good care of my hair.

That’s why, unlike many people I know, I didn’t get a sneaky trim from someone I don’t know in my garden. My hair is far too important to risk. How it looks can change my whole mood. And a bad chop can’t be remedied quickly.

I’m not the only one who feels this way about George. He’s one of the world’s top celebrity hair stylists when he isn’t in the salon – busy on promo junkets for movies with Alicia Vikander or taming Rosie Huntington-Whiteley’s mane. 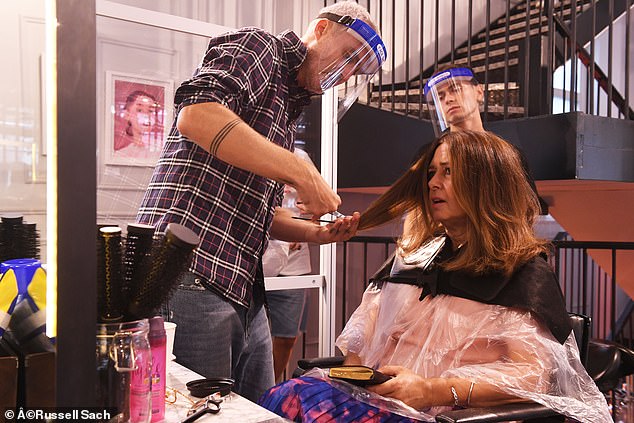 NEW NORMAL: Separated from other customers by a clear screen, Alexandra Shulman has her hair done at the Covid-safe salon of George Northwood in central London

His trademark choppy bob and sexy, relaxed styling have won him countless fans, including Meghan Markle, who took him on a Royal tour to Australia and wore his ‘updo’ for her wedding party.

Red carpet life stopped during lockdown, but provided a chance for him to help Claudia Winkleman cut her own fringe via Zoom.

Yesterday I was met by Tamara, Northwood’s office manager, who was wielding hand sanitiser and an electronic thermometer.

The salon had a slightly eerie feel, as do all places that have been lacking humanity for months. A team of stylists in face-covering visors added to the strangeness, along with the absence of colourful sofas and chairs, books and magazines.

It was obvious that the team were excited and raring to go, but also apprehensive about getting this opening up right.

After all, it’s a complicated process to keep social distancing rules when tending to people’s hair – a job that requires close proximity.

Did I want Rin – who was to wash my hair – to wear gloves? No, I was fine without. Did I want one of their masks? No, I had my own stylish silk Edina Ronay which I wore, as advised, for hair washing, where you are face-to-face.

One massive improvement was the clear, disposable covering on offer which was so much more attractive than traditional gowns which cut you off at the neck.

Dressed in my new plastic ‘bin bag’, as George called it, we had a quick discussion about what to do.

He suggested something radical – possibly a fringe – but I bailed, deciding that radical was not something I wished for my hair at this time. There’s enough uncertainty around without including my hairstyle. So we agreed a good trim would be the order of the day, putting back a bit of shape and removing ‘the weight’. George always talks about removing the weight, which sounds good to me.

Salons are not simply places where they attend to your hair. They are somewhere you can, for a short while, escape home or work and have someone take care of you – though at the moment that can’t extend to having food and drink offered.

When I worked full-time, I never regarded the salon as an escape. I was always worried I was wasting time. And having my hair primped for big events felt like work, too.

But since leaving the editor’s chair at Vogue, I appreciate the treat that is the hairdresser’s chair. A place where we hand ourselves over, trusting that a miracle will be achieved and we will emerge feeling and looking better.

I had forgotten the bliss of a professional hair wash. How different it is to lean back rather than forward and have somebody hose your hair in a soothing warm waterfall rather than a crashing downpour in the shower or bath. 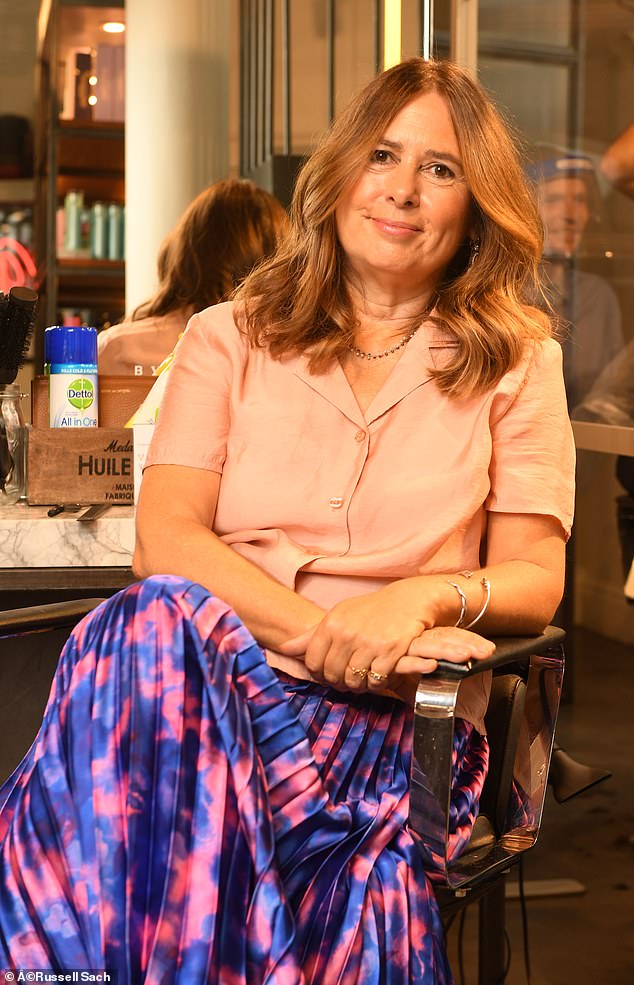 The glossy results of just over an hour in the hairdresser’s chair in George Northwood’s salon, which is now fully booked for the next three weeks

And how, after two shampoos (does anyone give themselves two shampoos?), a conditioning rinse and a head message my scalp felt wonderfully alive.

The George Northwood salon is 2,000 square metres and has 28 stations over three floors, all fully booked for the next three weeks.

The screens will enable them to work at full capacity every day. ‘We couldn’t have managed if the two-metre rule was still in,’ said George. ‘I decided to invest in these expensive screens to allow business as usual. Some salons have split teams to allow social distancing so they are only filling half their chairs at any one time.’

We were looking at my reflection in the mirror during this conversation. With a disposable black towel covering my hair and wearing my mask, I bore a worrying similarity to an ISIS bride but hey, in this new nothing-like-normal, everything looks different.

Hair stylists didn’t use to resemble Star Wars stormtroopers behind face visors either. By now, more clients were arriving. Some were taking advantage of a new ‘express’ service, in and out in half-an-hour, no hairwash and a 30 per cent discount. Others sat down with hair already wet. Everyone looked delighted to be there.

The space might look different but the busy, chatty atmosphere was the same. And that’s important. In salons the chat is essential. A great hairdresser is an almost priestly figure, receiving confession, and gossip and ambitions. It’s amazing the things people will tell their hairdresser.

‘I wonder what question I am going to get asked the most,’ George pondered as he finished my hair with his magic tonging technique.

‘I bet it’s, “Have you really not done any hair during lockdown?”’

As someone who has shared the odd walk with him over this period, I can vouch that he wasn’t offering any clandestine consultations.

An hour and a quarter after arriving, I left the salon with beautiful hair. The blow-dry smoothness revealed the different shades brighter and more lustrous, the ends are blunt cut and more youthful and, yes, the weight has gone. I even think, though I might be imagining it, the cut has removed a few pounds from my face.

I feel cared for. Shiny and clean. I only wish I had a party to go to, where I could show off this new improved me.