Actress June Brown refused to say how many cigarettes she smoked each day. She wasn’t counting, she insisted.

She’d been a smoker since her teens and, she joked, her blood was the colour of nicotine, so something was bound to kill her soon enough — why should she bother to quit?

She took the same attitude to work. After eight decades in the theatre and on television, she wouldn’t know what else to do with herself.

‘Even if I feel like death warmed up, I find when I get on set that my energy comes,’ declared Brown, beloved as the disapproving, Bible-quoting Dot Cotton (later Dot Branning), queen of the Albert Square launderette on EastEnders.

June, who died at her home in Surrey on Sunday, aged 95, lived a life defiant of all regrets.

She refused to stub out her ciggies, even turning up for an appearance on the Graham Norton Show in 2013 to promote her autobiography with a fag in one hand.

Her fellow guest that night was Stefani Germanotta, alias Lady Gaga, who was instantly besotted with June’s haughty insouciance.

June turned down an invitation to go night-clubbing with the pop goddess on the grounds that she had another chat-show the following day and intended to be on time and unfuddled.

That was the other side of June Brown’s character — she was a professional to the tobacco-stained tips of her fingers. 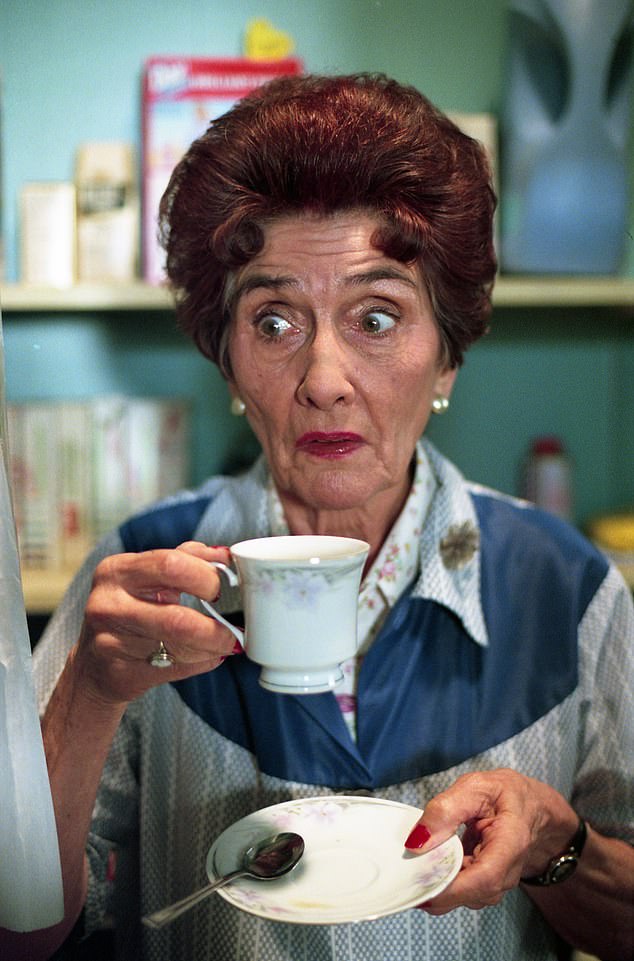 This mixture of the outrageously unconventional and the stoically dependable enabled her to enjoy a career that stretched from her beginnings at the Old Vic and the Royal Shakespeare Company after World War II, to recurring appearances on panel shows such as Loose Women in her 90s. Her attitude to everything was relentlessly matter-of-fact. She had no time for stage fright, for instance.

During a short stint on Coronation Street in the 1970s, she asked William Roache (who played Ken Barlow) why so many in the cast seemed anxious, and he told her that nerves got worse with age.

‘I thought, “What a waste of time,” and decided never to be nervous again,’ she said.

She never forgot her theatrical training, once demonstrating to Terry Wogan on his 1980s chat show a breathing technique that she had learned from the singing coach at the Glyndebourne Opera Company.

She called it ‘the fish’s gills — a way of breathing that wasn’t just about the diaphragm. We had to use the base of our backs, like a lavatory being flushed from a cistern, the water going down into the bowl and suddenly flushing up on each side’.

That gave her a voice of great strength, though by the time she came to play Dot it was a throaty rasp. Typically, she didn’t blame the cigarettes, but ‘too much television work, not enough acting in large theatres’.

Another of the contradictory aspects to her character was her willingness to take the blame for other people’s mistakes, telling EastEnders co-stars to blame anything that went wrong on her.

But in her own life, she frequently put the blame on fate. Superstitious by nature, she discovered palm-reading aged 16, and all her life she was convinced that her sudden changes in fortune were due to a broken ‘line of fate’ that split in two, halfway across the palm of her right hand.

She continued to read friends’ palms for many years and would sometimes seek out old theatre colleagues to discover if her predictions had come true.

She blamed her volatile love life on the death of her sister, Micie, in 1934. June was seven, Micie (pronounced Meecie) a year older. The two girls were devoted to each other, sharing a room in the attic of the family home in Needham Market, Suffolk.

June remembered being sent to school one morning, with her elder sister tucked up ill in their parents’ bed. Their grandmother looked into the room and declared: ‘There is a dying child!’

Within days, Micie had died of meningitis. Her coffin was placed in the drawing room, though June and her baby sister, Rosebud, were not allowed to see it.

Micie was buried in the children’s section of Ipswich cemetery, alongside their brother, John Peter, who had died of pneumonia just 15 days old.

‘The loss of her affected my whole character and shaped the way I behaved for a long time,’ she wrote. ‘In particular it influenced my expectations of men. Too dependent, I found it impossible to be happy alone. I was constantly in and out of love, always looking for the kind of caring Micie had given me.’

Their grandmother blamed June’s father, Henry, a heavy drinker, for Micie’s death. A beating had brought on the final illness, she said.

When June’s parents split up, she and her mother, Louisa, went to live with the gran. Henry came round to order them home, and his mother-in-law punched him on the nose, breaking his glasses.

June had hoped to train as a doctor but, after her father went bankrupt, there was no money for university.

This was a blow because she had always been a dab hand with a scalpel. As a child, she used to practise dissection on wild rabbits, putting them in a biscuit tin to gas them before cutting them up.

‘Nowadays, people would scream in horror at the thought,’ she said. ‘But we were not sentimental about field animals.’

June’s first romance came early. Aged 14, she fell for a Belgian refugee named Ralph, who was ten years her senior. She called him Raoul, he called her Juanita, and after he was drafted into the British medical corps they exchanged passionate letters for four years.

When he stopped writing, he broke her heart. At last, after months of silence, she received a greetings card from him. It said coldly: ‘Best wishes for Christmas, Raoul.’

June joined the Women’s Royal Naval Service [WRNS] and a series of lively affairs followed, first with a young officer named Colin, then with a Canadian pilot named Glen who ‘taught me to ride Western style, reins in the left hand, right hand ready to shoot or throw a lasso’.

After leaving the WRNS, nothing much appealed to her as a job and it was her little sister, Rosebud, who urged her to apply to the Old Vic theatre school in 1947, which she did successfully.

Three years later she married a fellow actor, Johnny Garley. Neither was faithful, before or after the wedding, but while June took the affairs in her stride, Johnny became depressed. 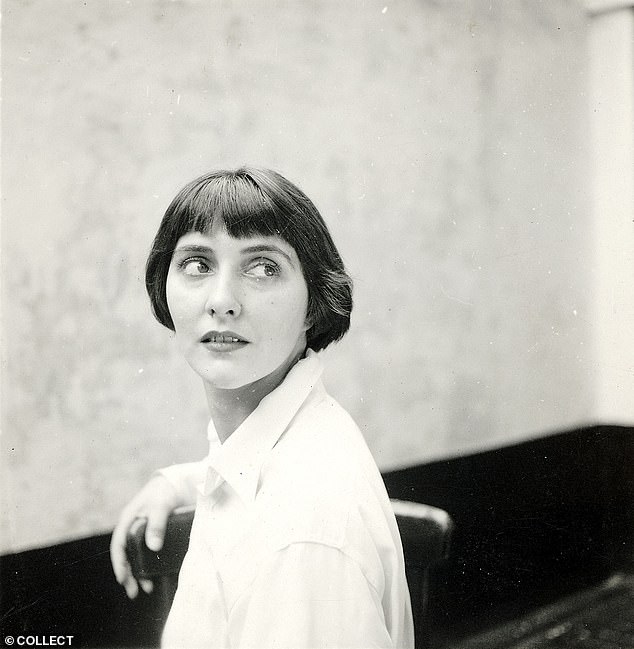 June, who died at her home in Surrey on Sunday, aged 95, lived a life defiant of all regrets

In 1957, aged 30, he killed himself, the day after threatening June with a breadknife. She returned to their flat to find he had closed the doors and windows, switched on the gas and lain down to die. A suicide note was scribbled on the back of a page from a script.

She married again the following year to Robert Arnold, also an actor, and had six babies in seven years. ‘I used to take the children to work with me,’ she said. The smallest would sit in a pram in the theatre dressing room while she was on stage.

A solid career in repertory theatre and then as a character actress on TV followed— including roles in Z Cars, Doctor Who, Dixon Of Dock Green and The Duchess Of Duke Street. She also won plaudits on stage as Hedda Gabler and Lady Macbeth.

But she did not become well-known until she was nearly 60, when the leading star of EastEnders, Leslie Grantham — better known as Dirty Den — recommended her for the role of Dot, the stern Christian mother of Cockney bad lad Nick Cotton (John Altman).

She played Dot for more than 30 years, with storylines that became national talking points — including the episode where she helped her old friend, Ethel (Gretchen Franklin) to die with an overdose of morphine, and another in which she survived Nick’s attempt to murder her.

Later, she watched Nick die from an overdose of the heroin she had bought for him. ‘I ain’t called the ambulance,’ she told him. ‘I prayed to let Jesus decide whether the world was a better place without you.’

But her most celebrated episode came in 2008, with a monologue in which she dictated her life story onto a cassette for her husband, who had suffered a stroke. No soap had ever devoted a full half-hour to one character, and the performance earned June a Bafta nomination.

The following year, she was awarded the MBE, with an OBE following in 2021. The rest of the cast thought that was a pale recognition of her talents, and Adam Woodyatt, who plays Ian Beale, once revealed they had campaigned for her to be made a Dame. Shortly after, she appeared in a West End production of Calendar Girls, naked for her photoshoot scene with a bag of knitting clasped to preserve her modesty.

Her husband, Robert, to whom she was married for 45 years, died in 2003, but widowhood didn’t impact her work rate — dancing a tango on a Strictly Christmas Special, for instance, when she was 83.

Her delight in stirring mischief didn’t ebb either. In 2009, she gleefully told a Guardian reporter that she had always voted Tory: ‘I wouldn’t vote Labour, dear, if you paid me.’

She left EastEnders in 2020, but never lost her gift for the provocative one-liner.

‘I want to be buried at sea,’ she announced. ‘The Britannia Shipping Company drops you off round the Isle of Wight. I’ll be in a nice white nightie and they wrap you in a balsa wood coffin and weight it.’

There had better be room in there for a carton of ciggies.