During his career in the Sicilian Mafia, Giovanni Brusca was known as the “scannacristiani,” or the “people-slayer”.

After he was arrested in 1996, the mobster confessed to playing a role in more than 100 killings, including the murder of a 14-year-old boy who was dissolved in acid because his father had been an informant. Now Brusca is free – and his parole has sparked outrage in some quarters across Italy.

“This is not the ‘justice’ that Italians deserve,” said Matteo Salvini, head of the right-wing League party. Enrico Letta, the leader of the centre-left Democratic Party, described Brusca’s release as “a punch in the stomach”. 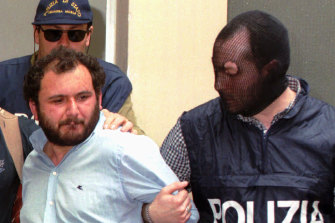 Giovanni Brusca, under arrest, pictured outside police headquarters in Palermo in 1996. Credit:AP

Brusca, 64, was released from jail Monday after serving a 25-year sentence. While in prison, he became an informant whose testimony helped the government to crack down on the Cosa Nostra organised crime network and led to numerous arrests. Collaborating with prosecutors allowed Brusca to avoid a life sentence, according to Il Riformista.

As a prominent member of the Cosa Nostra, Brusca had been responsible for some of the group’s most infamous crimes. In 1992, he detonated a road bomb that killed Giovanni Falcone, a judge who had devoted his life to prosecuting the mafia, along with his wife and three bodyguards. 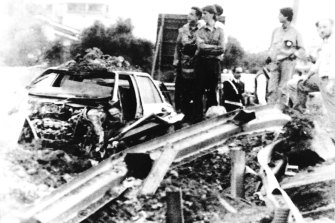 The remains of Italian judge Giovanni Falcone’s car, which was blown up in May 1992, as pay back for his conviction in 1987 of more than 300 mafiosi. Mr Falcone, his wife, a fellow magistrate and three bodyguards died in the explosion.

Pietro Grasso, an Italian senator and a former magistrate who worked with Falcone and Paolo Borsellino, another prominent anti-Mafia prosecutor who was murdered in Sicily in 1992, said that in Brusca’s case, the state “won not once, but three times”.

Authorities recorded a victory when they arrested him, he wrote on Facebook, “because he was and remains one of the worst criminals in our history for the number of crimes committed and for the brutality”.

The second victory was convincing him to collaborate and testify, and the third was when he was released because it was then that “a very powerful signal” was sent “to all the Mafia mobsters in jail who will never have freedom again, if they do not collaborate,” Grasso said.

Falcone’s sister, Maria, told Italy’s La Repubblica newspaper that she was “pained” by the news but understood that Brusca had served his time. Relatives of other victims expressed more indignation, telling the paper that the “people-slayer” should have been given a longer sentence.

Nicola Di Matteo, whose 14-year-old brother Giuseppe was killed and dissolved in acid, noted the irony of Brusca himself becoming an informant. She suggested that Italy should rethink “this system that rewards all government collaborators, even those responsible for massacres and hundreds of murders”.

Law enforcement officials have argued that offering reduced sentences to informants is a crucial tool for prosecutors seeking to crack down on organised crime. But politicians are now questioning whether the law needs to be reformed so that someone who has committed as many crimes as Brusca cannot evade a life sentence, La Repubblica reported.

“He has collaborated with justice only to get the benefits,” Rosaria Costa, whose husband was killed in the bombing that killed Giovanni Falcone, told newspaper Corriere della Sera.