Blood found in killer cop’s car: Chilling images show how traces were found on front and rear seats and boot of Wayne Couzens’ Seat where he carried out sickening murder of Sarah Everard

Wayne Couzens was snared by detectives after the blood of Sarah Everard was found in the seats and boot of his car.

Officers also found semen in the Seat, leading police to deduce that the convicted killer raped the 33-year-old in the car.

Couzens had driven from his home in Kent to London on the night of March 3 to carry out his sadistic crimes.

He hired a Vauxhall Crossland from a rental garage after plotting for over a month, because the car looked similar to an undercover police car.

But he was exposed by CCTV after bus camera footage caught him stopping Ms Everard while the officer carried out a fake arrest for an apparent breach of Covid rules. 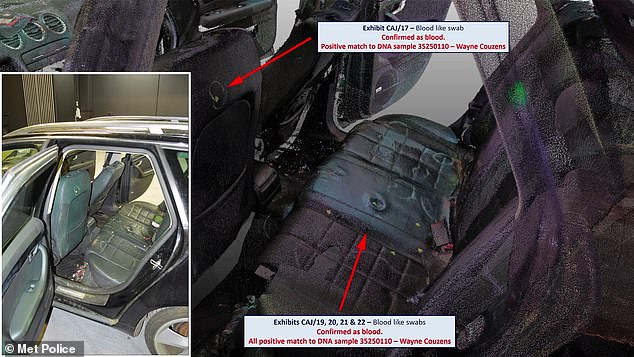 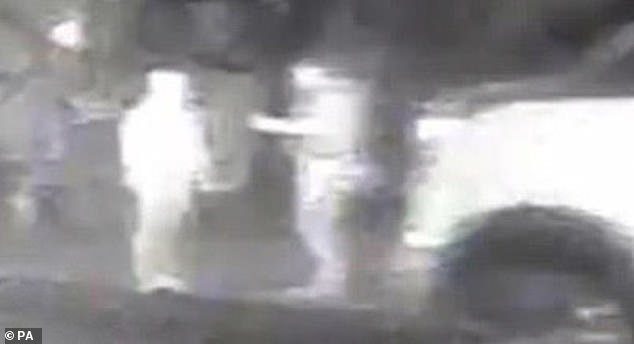 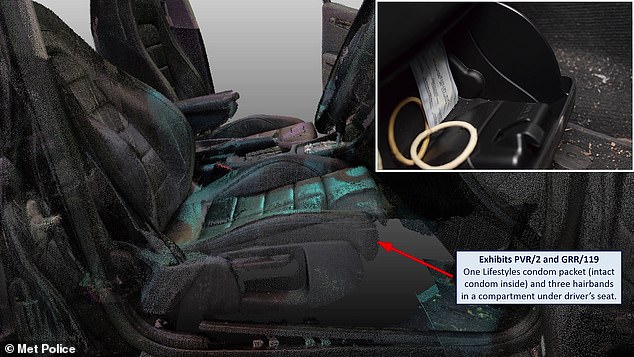 The footage shows him standing feet away from Ms Everard on the side of a Clapham street moments before her disappearance.

The clip shows Couzens flashing his warrant badge before handcuffing and abducting the advertising executive near her home.

Couzens then drove her 50 miles to Dover in the rental car before he swapped it for his own Seat.

Couzens took her to a rural area and raped her, before later being seen buying Lucozade and other drinks from BP station with her body in boot, after she was believed to have been murdered.

Distressing details of the timeline suggest Ms Everard could have been alive for more than four hours.

She was snatched off the street by 9.30pm and when the killer pulled into the garage at 2.30am, Sarah is thought to have been in his boot, already dead. 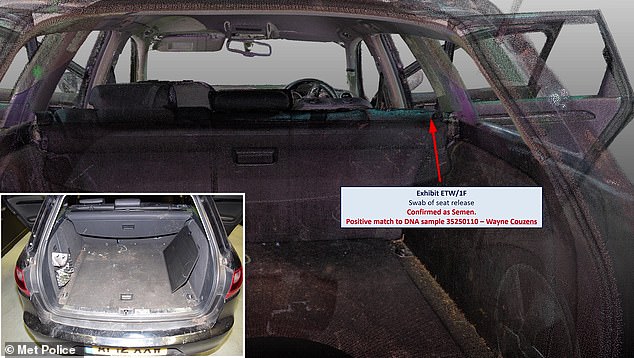 Officers also found semen in the Seat, leading police to deduce that the convicted killer raped the 33-year-old in the car 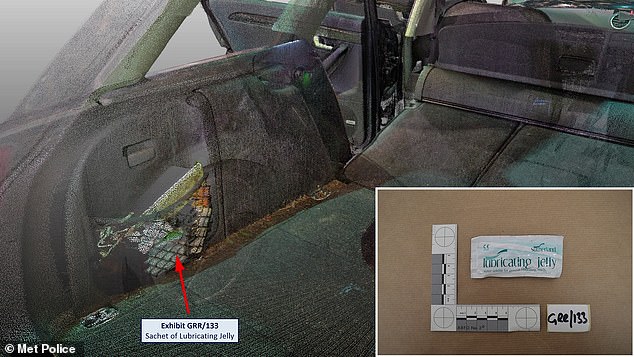 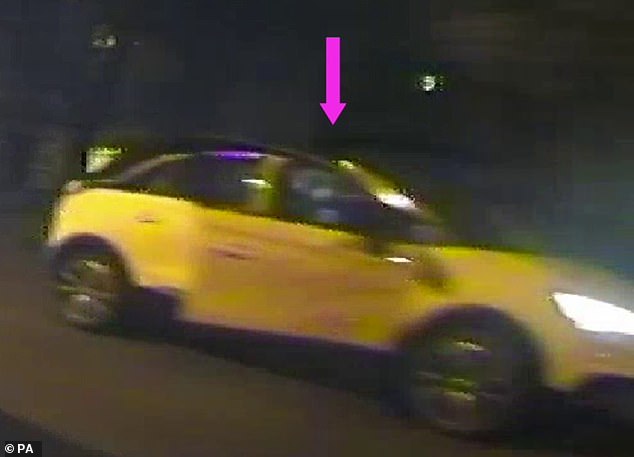 Couzens sitting in the front seat of the hire car, after he falsely ‘arrested’ Miss Everard (who is seated in the back) outside Poynders Court on Poynders Road, Clapham. It was only after they left London that she may have realised her fate

Couzens later was seen switching back the cars as he took the Vauxhall back to Enterprise.

He then drove in his own Seat to Sandwich where he dumped Sarah’s phone before buying petrol to burn her body.

She was found days later and had to be identified by dental records, but was still wearing a necklace and a gold earring. 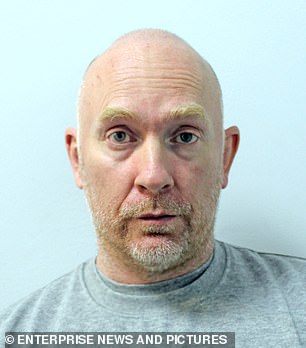 Couzens was jailed for life today with no chance of parole

Couzens was arrested on March 9 after detectives traced the hire car back to his address.

They seized his Seat where officers discovered a broken fragment of Ms Everard’s sim card and a blood stain which matched her DNA.

Quizzed by police after his arrest, Couzens lied that he had been ‘leant on’ by an Eastern European gang who threatened to harm his family if he did not agree to pick up a woman and hand her over to the occupants of a van near Maidstone.

Taken to Wandsworth Police Station, he repeatedly tried to self-harm by banging his head on a sink and running into a wall, and was put under constant watch before appearing in court.

He later ditched his story and pleaded guilty to kidnap, rape and murder.

Today, he was jailed for life with no chance of parole after he ‘misused’ his ‘office and authority’ as a Met officer.

Lord Justice Fulford told Couzens he is a ‘warped’ and ‘self-pitying’ killer who relied on his position and knowledge of Covid-19 lockdown laws to carry out one of the most shocking crimes in recent history. 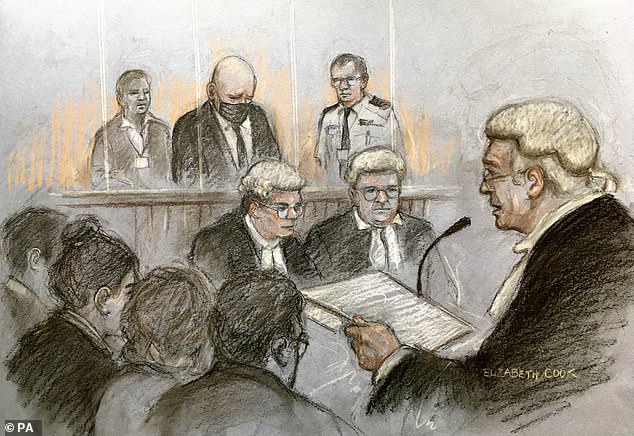 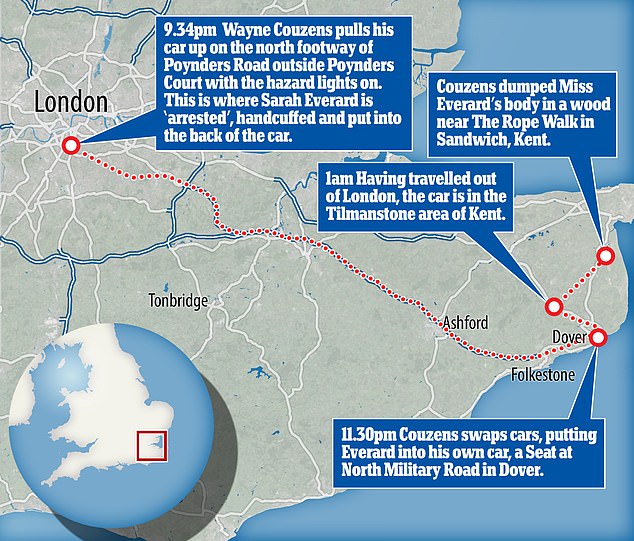 Sarah’s family wept and made a final brave statement to tell Couzens, 48, ‘the world is a safer place without you in it’ as he became the first police officer in British history to receive a whole life sentence. The family wiped away their tears and stood to face him as he learnt he would die in prison and was taken to the cells.

Accusing him of ‘eroding’ public trust in police and making women more frightened to walk the streets, the judge said: ‘Sarah Everard was a wholly blameless victim of a grotesque series of offences’, adding: ‘She was simply walking home’.

The judge made the killer stand and face the court – but he kept his head bowed – as he handed down a whole life term reserved for around 70 of Britain’s most dangerous criminals including serial killers and terrorists.

He said: ‘Wayne Couzens, you kidnapped, raped and murdered Sarah Everard, having long planned a violent sexual assault on a yet-to-be-selected victim who you intended to coerce into your custody.

March 8: Detectives show Couzens a picture of his tragic victim

‘You have irretrievably damaged the lives of Sarah Everard’s family and friends – you have eroded the confidence that the public are entitled to have in the police forces of England and Wales.

‘I have seen no evidence of genuine contrition on your part as opposed to evident self-pity and attempts by you to avoid or minimise the proper consequences of what you have done’.

Outside the Old Bailey his former boss Cressida Dick refused to resign but admitted the now-sacked PC had ‘brought shame on the Met’ and damaged the ‘precious bond of trust’ between the public and police.

She said: ‘Sarah’s kidnap, rape and murder was one of the most dreadful events in the 190-year history of the Metropolitan Police Service.

‘There are no words that can fully express the fury and sadness we feel about what happened to Sarah. I am so sorry’, adding: ‘Speaking frankly as an organisation, we have been rocked. I absolutely know that there are those that feel their trust in us is shaken’.