Fishing boat that appeared in EastEnders, Countryfile and Vogue after sitting on beach for more than 65 years is destroyed in fire

An iconic fishing boat which starred in Countryfile and EastEnders has been destroyed in a fire after sitting on a Kent beach for more than 65 years.

The picturesque ‘Ian and Tina’, which had become a beach landmark in Dungeness, Kent, was destroyed in a blaze at 4pm on Sunday.

Firefighters used hose reel jets and drag rakes to extinguish the flames which have left a charred shell of the previously stunning wooden vessel.

The cause of the fire is not known and no injuries were reported by 5.30pm, according to Kent Fire and Rescue Service. 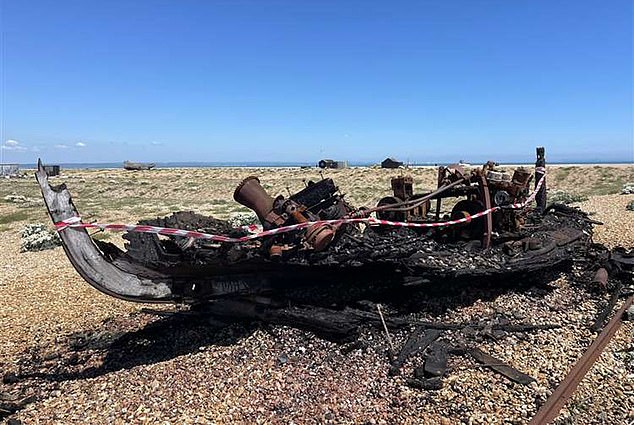 The picturesque ‘Ian and Tina’, which had become a beach landmark in Dungeness, Kent, was destroyed in a fire at 4pm on Sunday and left as a charred shell (pictured)

The clinker-built wooden boat featured in a 2007 episode of EastEnders, BBC’s Countryfile and most recently a British Vogue fashion shoot last year.

The fishing boat was made in Rye, East Sussex and allowed to see out its years on the shingle beach in Romney Marsh after it was deemed unseaworthy.

The vessel’s former owner Len Prebble, who has a memorial plaque commemorating him as the last fisherman to live in Myrtle Cottage, died in 2004.

His well-weathered RX15 registered boat has been left in its place on the beach ever since as a mark of respect and had become renowned in the area for its history.

The well-recognised vessel is just one of many abandoned wooden boats that sit on the pebbled beaches of Dungeness, which are popular spots for visitors to pose for photographs.

The popular fishing boat had been sat on top of a pile of wooden slats alongside old, rusted railway tracks on the shingle ‘desert’ for more than 65 years. 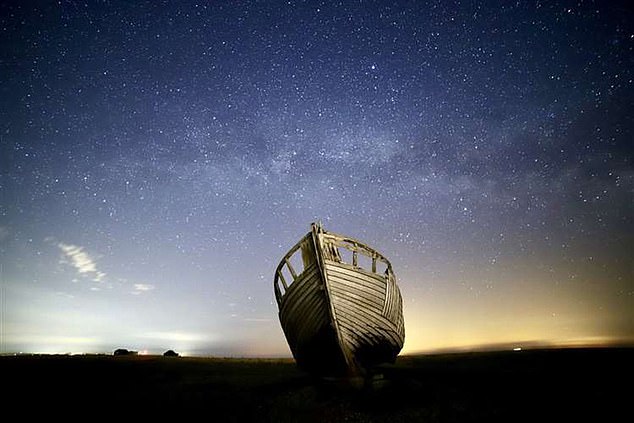 The clinker-built wooden boat (pictured) featured in a 2007 episode of EastEnders, BBC’s Countryfile and most recently a British Vogue fashion shoot last year

The tracks were used by fisherman who would secure their carts on to the tracks to pull their haul across the shingle for transportation.

Photographer Susan Pilcher, who has fond memories of the vessel from her first night time shoot back in October 2017, said: ‘It’s really sad.

‘That boat is part of my night time photography and my go to place to shoot the milky way.

‘It’s absolutely devastating for the family and the grandkids who would go and visit as a way of remembering Len Prebble, who died in 2004.

‘The boat has seen out its years on the shingle and become a favourite with locals.

‘I just hope it was a tragic accident and nothing malicious.’

Dungeness beach has previously been called Britain’s only ‘desert’ due to its low levels of rainfall and is one of Europe’s largest expanses of shingle.