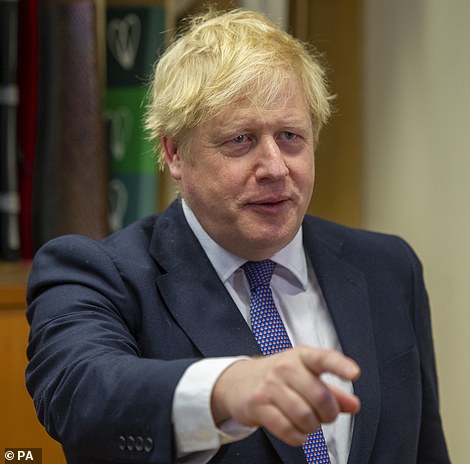 Boris Johnson in London yesterday, will chair a Cobra meeting on Coronavirus for the first time

Boris Johnson is taking personal charge of the response to Coronavirus amid mounting fears that it will rampage through Europe.

The PM will chair a meeting of the emergency Cobra committee on the crisis for the first time – but it will not happen until Monday.

Downing Street sources said Mr Johnson, who has up until now left Health Secretary Matt Hancock to head the response, was determined to ‘make sure everything that can be done is being done’.

It is unusual for a Cobra meeting to be announced days in advance, but it is said to have been called on on Monday for ‘logistical’ reasons.

The news emerged as the first case of coronavirus was confirmed in Wales, and two more were identified in England – bringing the total number in the UK to 19.

Chief Medical Officer for Wales Dr Frank Atherton confirmed this morning that one person had been diagnosed with the virus after travelling back to Wales from Italy.

He said: ‘I can confirm that one patient in Wales has tested positive for coronavirus (Covid-19).

‘All appropriate measures to provide care for the individual and to reduce the risk of transmission to others are being taken.

‘I can also confirm that the patient had travelled back to Wales from northern Italy, where the virus was contracted.

‘I’d like to take this opportunity to assure the public that Wales and the whole of the UK is well prepared for these types of incidents.’

Meanwhile, the Department of Health confirmed two further cases of coronavirus in England.

Chief Medical Officer Professor Chris Whitty said: ‘The virus was passed on in Iran and the patients have been transferred to specialist NHS infection centres at the Royal Free Hospital.’

The total number of cases in England is now at 17, and the first case in Northern Ireland was confirmed on Thursday.

The Northern Ireland patient had recently returned from northern Italy, while a parent at a primary school in Derbyshire contracted the virus in Tenerife, where 168 Britons are being kept in a hotel in the south-west of the island.

Italy has become the worst-affected country in Europe, with at least 650 cases and 15 deaths.

On Friday, easyJet said it will be cancelling flights as a result of the continued spread of coronavirus.

The budget airline said the move will particularly affect ‘those into and out of Italy’, and it will adapt its flying programme to best support demand. 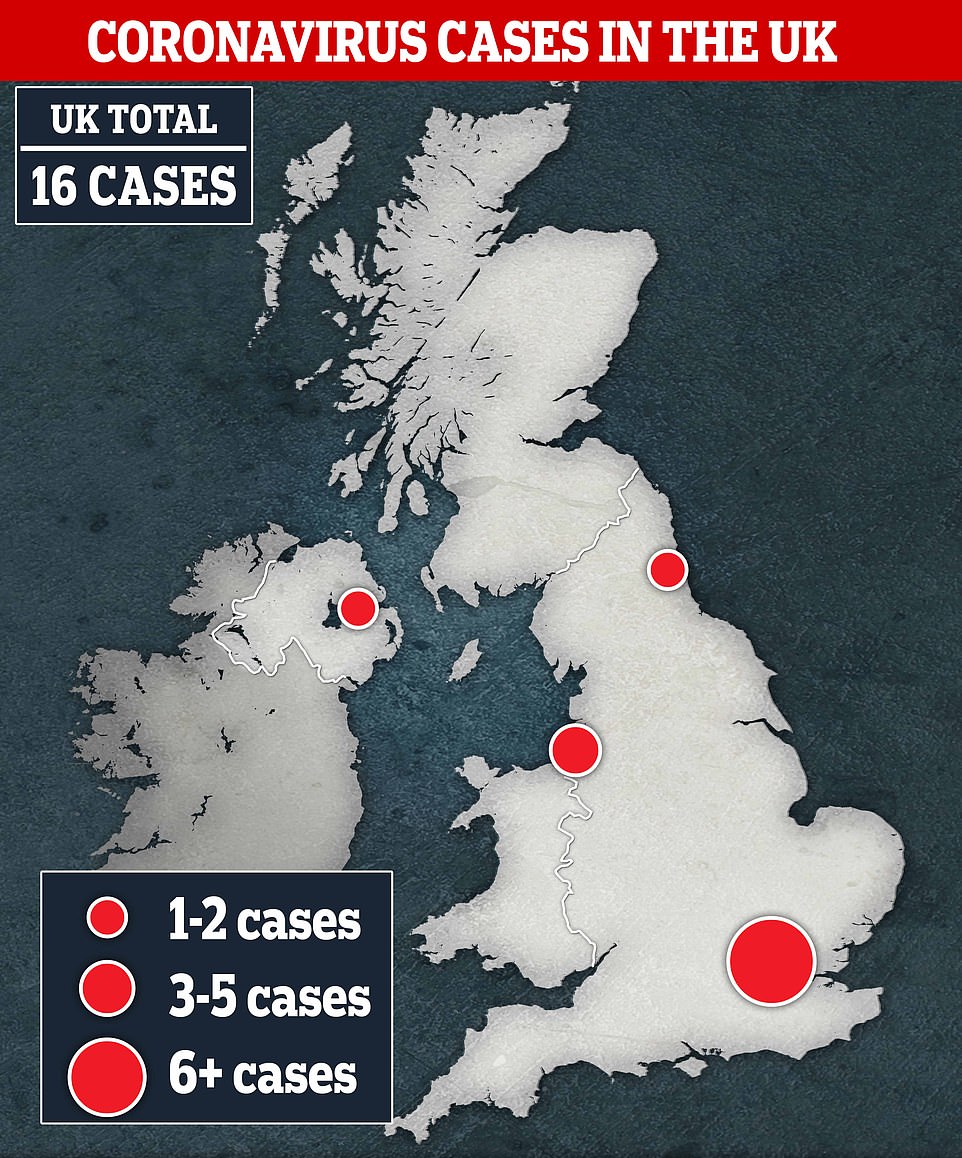 There are currently 16 confirmed cases in the UK – all of the individuals are currently located in hospitals dotted around the UK. Three new cases were confirmed last night 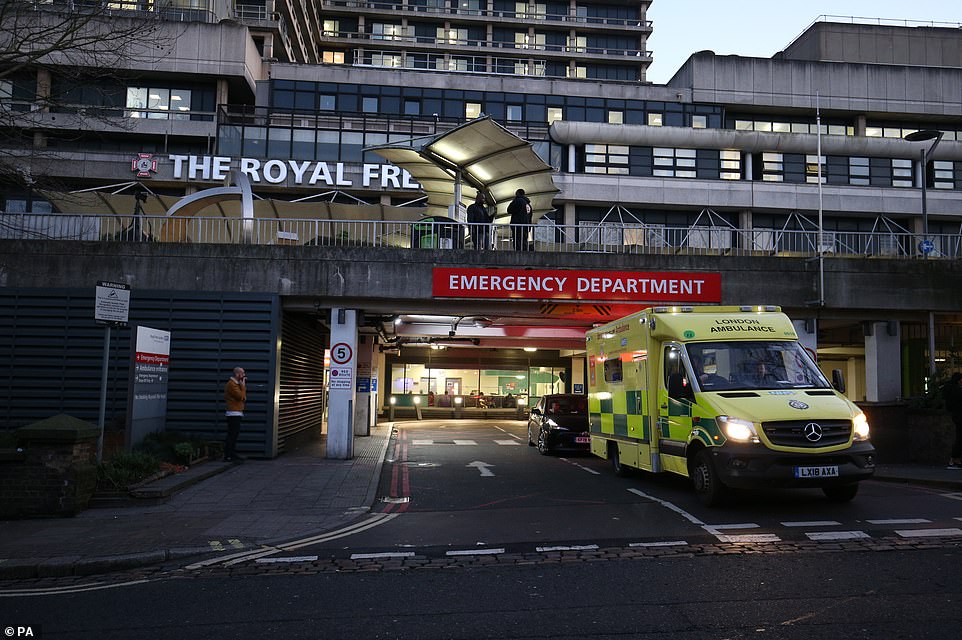 EasyJet said the increase in Covid-19 cases in northern Italy has resulted in softer demand in the region, while demand has also slowed in other European markets.

A total of 168 Britons were among hundreds confined to the H10 Costa Adeje Palace in Tenerife after at least four guests were diagnosed with coronavirus.

Sources said around 50 of the Britons will be allowed to leave if they wish.

Some holidaymakers were seen leaving the hotel today wearing face masks after being screened for their temperature.

The health minister in Tenerife said around 130 guests from 11 different countries will be able to leave the hotel if they arrived on Monday, after infected guests had already left.

No other guests or staff at the hotel have been infected and the remaining 600 holidaymakers from 25 different countries are to be quarantined for 14 days.

Airline Jet2 has said it will not fly back any people who have been staying at the hotel until they have tested negative for the illness.

The airline said last night: ‘We will not fly any customer who has stayed at the H10 Costa Adeje Palace during the quarantine, until this incubation period has passed or unless they have been explicitly tested for Covid-19 by a recognised authority and are confirmed as clear of the virus.’

Two Britons were among eight people being monitored on board a cruise ship that was turned back by the Dominican Republic.

A joint statement by the Public Health Ministry and port authority on the island said the captain of the Braemar, which is carrying around 1,500 people, reported that four Filipinos, two British citizens and two US citizens were under medical observation for symptoms such as fever, coughing, or breathing difficulty.

In China, where the virus originated, 78,497 cases have been reported, including 2,744 deaths.

World Health Organisation director-general Dr Tedros Ghebreyesus told a press conference in Geneva on Thursday that coronavirus has the potential to become a global pandemic but this stage has not yet been reached. 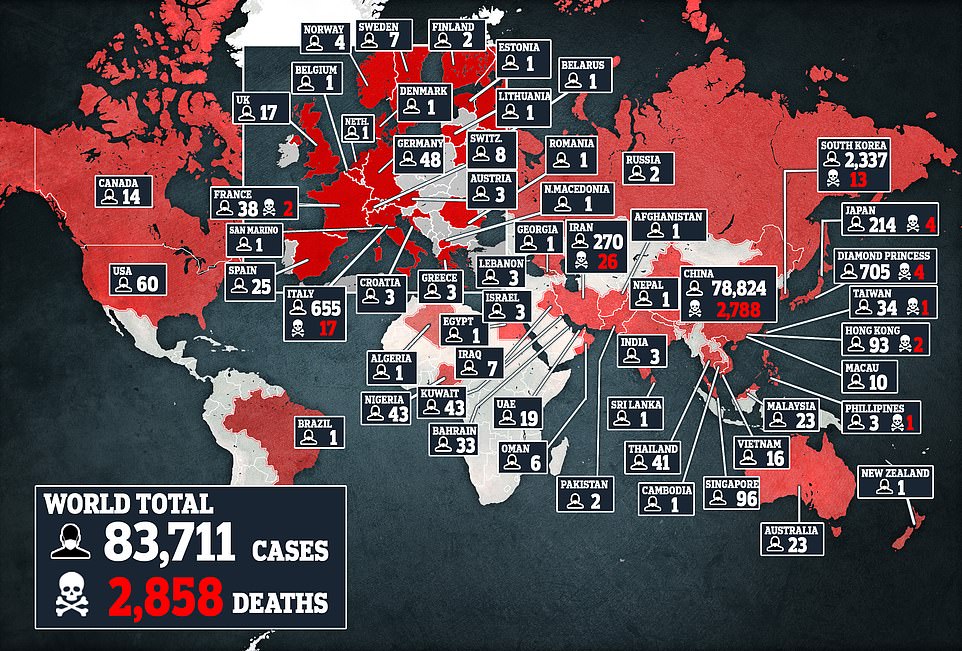