London: Britain has recorded nearly 79,000 new COVID-19 infections in a single day amid warnings that the UK would continue to “break records” in the weeks ahead as the Omicron variant rampaged through the country.

Prime Minister Boris Johnson, who faced a rebellion by nearly 100 of his MPs as he introduced limited vaccine passports, said that a “national fightback” through the vaccine booster campaign was under way. He vowed to stick by his promise that this Christmas would be “considerably better” than last year’s when millions were ordered to spend the day alone. 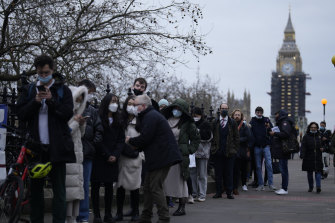 Long lines have formed for booster shots across England as the British government urged all adults to protect themselves against the Omicron variant. Credit:AP

The number of infections recorded on Wednesday across the UK was 78,610, an increase of 19 per cent on the seven days prior, with the true figure expected to be closer to 200,000.

Infections were highest in London, where only two-thirds are vaccinated, but were strong across the entire UK. The number of patients admitted to hospital was up 10 per cent compared to the week before with a total 7673 beds occupied by people with the virus.

At the peak of Britain’s worst wave last January and before the vaccination rollout had taken effect, around 40,000 beds were occupied by patients with the virus.

“This is a very serious threat. This is going to lead to lots of people getting ill simultaneously and we have to be realistic about that.” 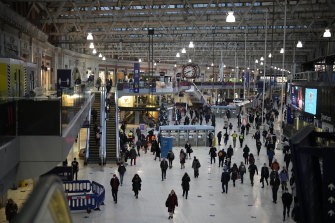 The morning rush-hour at Waterloo railway station in London.Credit:AP

Whitty said that even if the Omicron variant does prove weaker – as some data coming out of South Africa, where Omicron emerged, suggests – any benefit would be outpaced by the variant’s pace of transmission, with infection rates doubling every two days.

He said while laboratory data suggested the Omicron variant had a higher escape rate against the vaccines compared to Delta, there was not yet the clinical data to show this for sure.

After a slow start, Britain’s booster campaign has gathered pace with a record 656,711 jabbed on Wednesday, taking to 43 per cent the proportion of the population aged over 12 years who have received three doses of vaccine since the rollout began in December 2019.

There have been huge queues of people outside pharmacies and vaccine centres with the program opened to all adults.

Johnson has reinstated in England the legal requirement to wear masks indoors, the order for workers to work from home where they can and introduced proof of vaccination or a negative rapid test for large events.

Close contacts of positive cases no longer have to isolate but are required to take lateral flow tests daily.

There are no other restrictions in place and last week the Prime Minister gave the green light for Christmas parties to go ahead.

However, many in Britain are already voluntarily cancelling parties and reducing mixing.

“What we are saying is think carefully before you go,” he said, insisting that everyone should undergo a free rapid test before mixing and meeting those vulnerable to the disease.

He called for volunteers to help with the rollout of the booster campaign.

Get a note directly from our foreign correspondents on what’s making headlines around the world. Sign up for the weekly What in the World newsletter here.