‘Butcher of Bosnia’ Ratko Mladic whose troops massacred innocents at Srebrenica and Sarajevo is due in court to hear final verdict as he appeals against k,./genocide charges

The ‘Butcher of Bosnia’ Ratko Mladic will discover today if the UN has upheld his convictions and life sentence for masterminding a genocide during the 1990s.

The former Bosnian Serb military chief led troops who carried out a string of deadly campaigns including the Srebrenica massacre and the siege of Sarajevo during the Bosnian War between 1992 and 1995.

He was convicted in 2017 and sentenced to life imprisonment for crimes against humanity, war crimes and genocide. 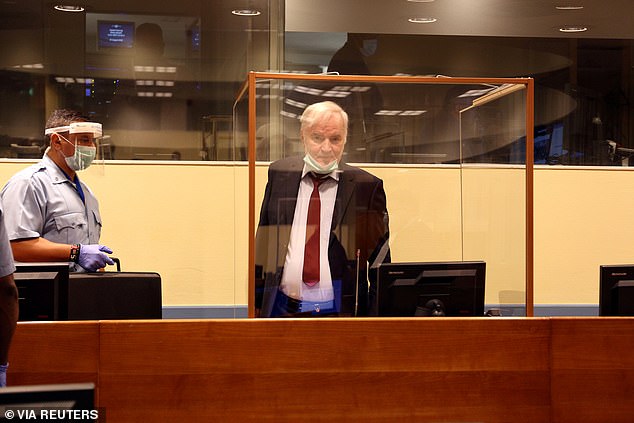 The verdicts in the appeal case will all but wrap up UN prosecutions of crimes committed in the war that killed more than 100,000 and left millions homeless.

Mladic was found guilty of genocide for leading the 1995 massacre in the eastern enclave of Srebrenica of more than 8,000 Muslim men and boys.

It was the worst massacre on European soil since World War II.

Widows and mothers of victims will be in court to hear the judgment by a five-judge panel led by Zambian Presiding Judge Prisca Matimba Nyambe.

Mladic also was found guilty of other crimes including persecution, extermination, murder and terror. 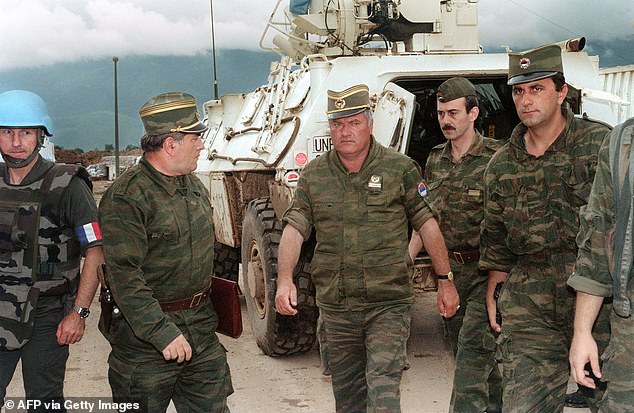 He was acquitted of a second genocide charge linked to a campaigns to drive non-Serbs out of several towns early in the war. Prosecutors appealed that acquittal.

Mladic’s former political leader, Radovan Karadzic, who is also referred to as the Butcher of Bosnia, was convicted of the same crimes and is serving a life sentence.

Mladic was first indicted in July 1995.

After the war in Bosnia ended, he went into hiding and was finally arrested in 2011 and handed over to the International Criminal Tribunal for the former Yugoslavia by the then-ruling pro-Western government of Serbia.

The UN tribunal has since shut its doors. Mladic’s appeal and other legal issues left over from the tribunal are being dealt with by the UN’s International Residual Mechanism for Criminal Tribunals, which is housed in the same building as the now-defunct court for the former Yugoslavia. 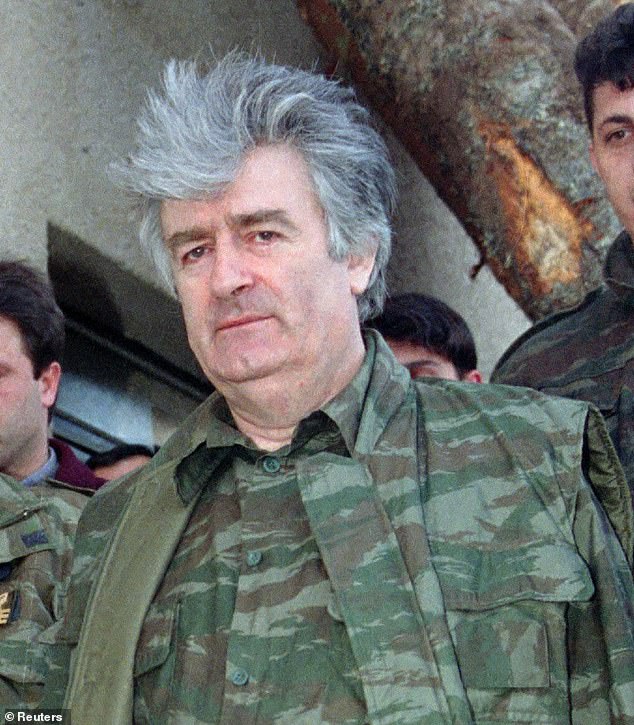 Radovan Karadzic (pictured), arrived in Britain last month to serve the rest of his life sentence for war crimes and genocide – on the Isle of Wight

Mladic and his legacy still divide Bosnia. Bosniaks, mostly Muslims, view him as a villain and war criminal while many Bosnian Serbs still consider him a hero.

‘I cannot accept any verdict,’ Serb war veteran Milije Radovic from the eastern Bosnian town of Foca told The Associated Press. ‘For me, he is an icon. And for the Serb people, he is an icon.’

It comes after Karadzic arrived in Britain last week to serve the remainder of his life sentence for war crimes and genocide.

The Bosnian Serb leader, convicted in 2016 of a string of atrocities, was flown in from the Netherlands in a maximum security operation on May 26.

He was then transferred to HMP Isle of Wight, better known by its former name, Parkhurst.

The 75-year-old war criminal was given a life sentence without parole and is expected to die in jail.

Srebrenica Massacre: 8,000 men and boys loaded onto trucks and killed by firing squad as they watched diggers plough graves

More than 8,000 Bosnian Muslim men and boys perished in 10 days of slaughter after Srebrenica was overrun by Bosnian Serb forces led by General Ratko Mladic on July 11, 1995.

It is the only episode of Bosnia’s 1992-95 war to be defined as genocide by two UN courts.

But when the soon-to-be victims clambered off trucks with other Muslim captives, they saw only a green hillside covered with bodies.

In the next hours, first under the July sun and then, at night, by the headlights of two industrial diggers, as many as 3,000 Muslim men captured when Serbs overran the eastern Bosnian enclave of Srebrenica were gunned down. 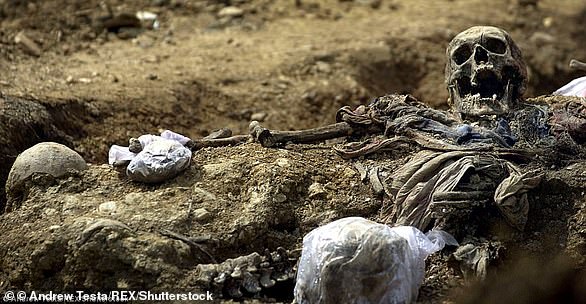 The body of a victim of the Srebrenica massacre lies in a mass grave in Budak, some 500 metres away from Potocari

Mladic visited a warehouse where the Muslims were being held and told the group they would be exchanged for Serb prisoners of war.

But instead of heading to the front line, they were taken to a sweltering sports hall in Krizevci, about 22 miles north of Srebrenica. Through the night, bus after bus arrived.

The men rested on each other. Those who couldn’t sit, stood.  Mladic appeared again on July 14, three days after the fall of Srebrenica. The general, accompanied by aides, greeted the prisoners by saying, ‘Hello, neighbors.’

‘We started yelling at him, ‘Why are you suffocating us here? Better kill us all,” Suljic said.

Finally, the prisoner exchange was said to be ready. Men were given water for the first time since arriving in Krizevci.

Then, they were placed in two small trucks with 10 to 15 men a truck. As the open-back trucks left, they were followed by a red car.

When they arrived at their destination, they were told to get out onto the grass and stand with their backs to the the soldiers.  There were two firing squads of five soldiers each, armed with automatic rifles. 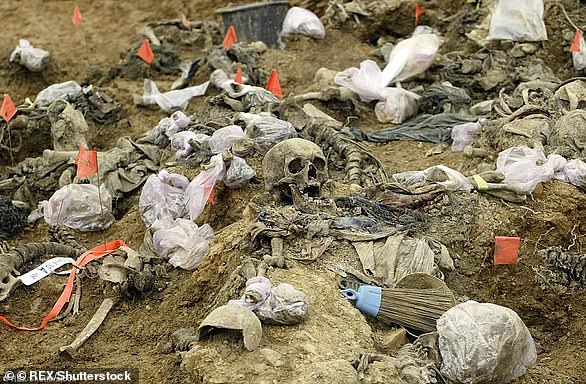 A mass grave on a hill overlooking the Memorial and Cemetery in Potocari, which is still being processed by the ICMP (International Commission for Missing Persons in the former Yugoslavia)

In intervals between the shooting, a Serb soldier walked among the bodies and finished off those still moving with a pistol shot to the head.

Thirty feet away, an industrial digger was preparing a mass grave.  Group by group, trucks brought prisoners, who were gunned down in turn.  When it became too dark to see, the soldiers used the headlights of two backhoes.

The International Red Cross has said 8,000 of the 42,000 people in Srebrenica before its fall to Serbs remain unaccounted for.

US spy photos have indicated mass graves around Nova Kasaba, west of Srebrenica. Madeleine Albright, US ambassador to the United Nations, told the Security Council as many as 2,700 people might be buried there.

The Serbs deny mass executions, suggesting the remains are those of some of 3,000 Bosnian government soldiers killed defending Srebrenica.

The Serbs have rejected UN demands for access to the area, though journalists who have slipped in have reported evidence of human remains.