Skip to content
HomeWorld NewsCancer patient, 51, who cashed in pension has been told he WILL live

Cancer patient, 51, who cashed in his pension to plan his own funeral when doctors said he had just six months left has now been told he WILL live

A cancer patient who cashed in his pension and planned his own funeral after being told his illness was terminal has now discovered he will live.

Peter Hinds, 51, from Warrington, was diagnosed with inoperable intestinal cancer in January 2017 and doctors told him he could have just six months left to live.

Having lost his sister Lesley to a brain tumour six weeks earlier, Peter said he wanted to take the burden off his family by arranging his own funeral for them.

He picked out the music he wanted, including He Ain’t Heavy, He’s My Brother by The Hollies, and gave strict instructions for a casual dress code. 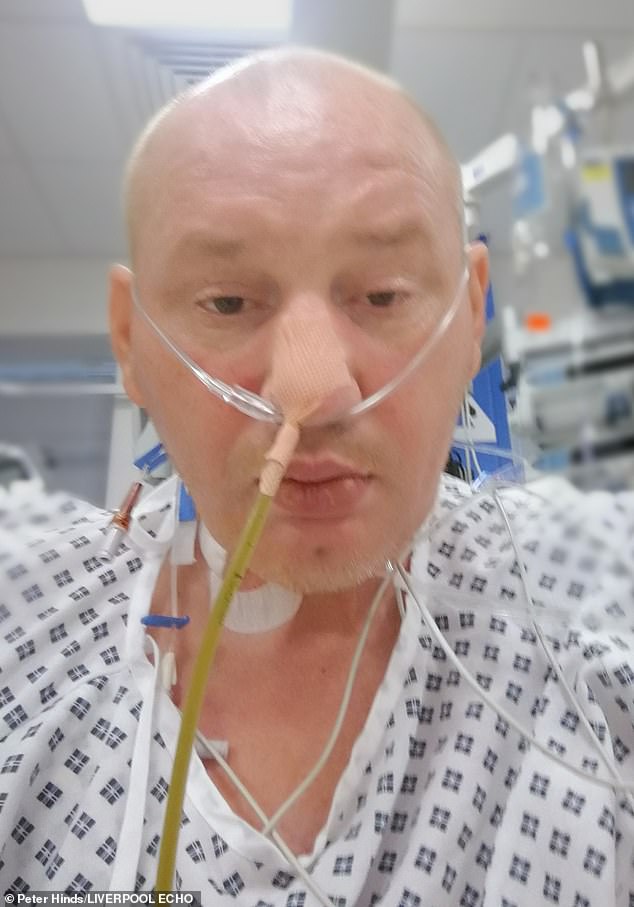 Peter Hinds, 51, from Warrington, was diagnosed with inoperable intestinal cancer in 2017 and cashed in his pension to pay for his own funeral and ease the burden on his family

He even reserved the spot where he wanted to be buried, next to his sister at Walton Crematorium.

To ease the financial burden off his wife Maxine, with whom he had bought a house with 12 months earlier, Peter also cashed in his pension.

However, on April 3 2018, after being referred to The Christie in Manchester, Peter was told that he could in fact start chemotherapy.

And eight months later, on December 6 2018, Peter underwent a 13-hour operation to remove the tumour.

The operation, which was described as having a 50/50 chance of success, means the tumour has now been removed and Peter has recovered.

He has since returned to his job as an outreach worker at Change Grow Live in Warrington, where he works with recovering addicts. 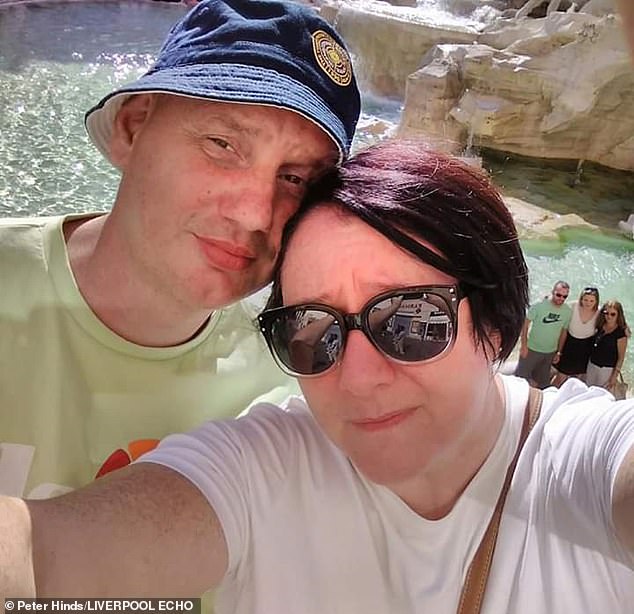 Peter said the ordeal has given him ‘a new perspective on life’. He told said: ‘I was diagnosed with cancer in January 2017 after I started being sick.

‘I was sick one day and then every day after that I kept being sick, I couldn’t even keep my Christmas dinner down.

‘One day I collapsed at home. My wife phoned an ambulance and I was taken to Warrington hospital where I stayed for four weeks.

It was at this time that Peter was told he could have less than six months to live, with no treatments options available to him and surgery being ruled out.

He said: ‘I couldn’t believe what I was hearing. It was devastating, I wasn’t even 50 at the time. To be told that I might not even see my 50th birthday was terrifying.’ 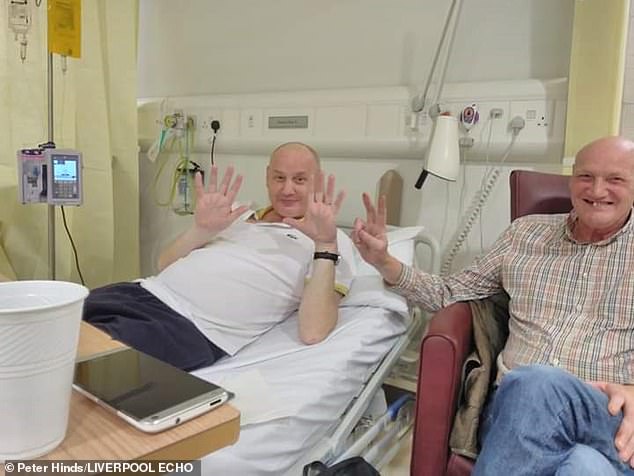 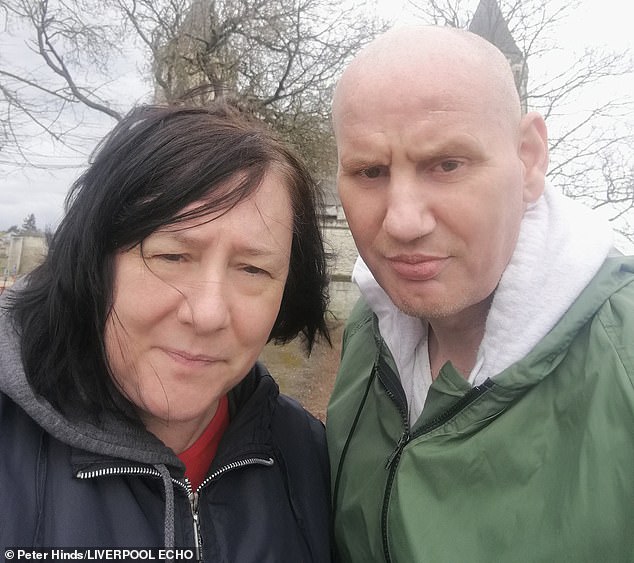 Peter said the news was even more difficult to comprehend as his sister Lesley had just died six weeks earlier from a brain tumour.

He added: ‘We buried her in December and six weeks later my mum got told her son had terminal cancer. It was devastating seeing my mum told that, and my wife finding out that her husband was going to die.’

In the months that followed, Peter began making arrangements for his funeral.

Peter said: ‘When my sister died and we arranged the funeral we were all guessing what she wanted so I thought I’ll tell people what I want do there’s no pressure on them. 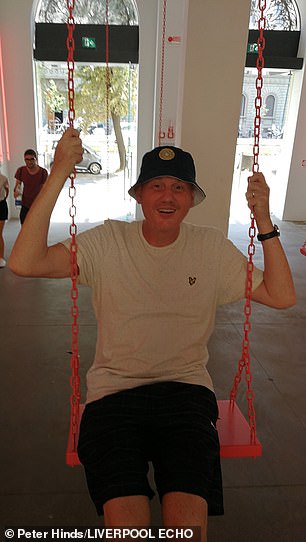 Now the tumour has been removed, Peter  attends hospital appointments every three months to monitor his condition

‘It’s surreal because you’re planning something that you don’t want to happen. I reserved a plot next to my sister in Walton Crematorium and I chose my own music for my funeral so everyone knew what I wanted.

‘I’m a Man City fan so I wanted Blue Moon and He Ain’t Heavy He’s My Brother by the Holly’s. I didn’t want anyone turning up in a suit and tie because that’s not me, I’d never wear that.’

Peter who going to appointments at Warrington Hospital at the time, asked to be referred to The Christie in Manchester.

Peter said: ‘We went on holiday to Lourdes in France and while I was there The Christie rang me saying they’d made me an appointment for the 3rd April.

‘They did blood tests and all different checks and they said you’re going to start chemo.’

Peter finished his last round of chemotherapy on November 6, 2018 and was told the tumour had reduced in size.

And weeks later, he was told the life-changing news that he would undergo an operation which would attempt to remove the tumour.

Peter’s wife Maxine said: ‘After he’d finished the chemotherapy the tumour had shrunk right down so they sent the results back to the multi discipline team.

‘They said there was a 50/50 chance that an operation would remove it and one of the doctors said ‘I’m willing to give it a go.”

On December 6, 2018, Peter underwent the lengthy operation, which successfully removed the tumour.

He now attends hospital appointments every three months to monitor his condition.

Peter said: ‘Everything is under control now and I don’t need to have any more treatment, it’s amazing.

‘It’s all been very surreal. The consequences of being told you could have six months to live are huge. I’d planned my funeral and cashed in my pension.’

Peter added: ‘I got told I would never work again so going back to work was amazing for me and it still is, because I love my job.

‘It’s given me a complete new perspective on life. Before I got diagnosed I spent time a lot of time on social media but I don’t bother now.

‘I’m just interested in living my own life. Without the support from my family and friends and the amazing staff at The Christie, I wouldn’t have been able to remain positive as I did going through the treatment.’

Peter’s stepson, Simon McConville, has been inspired to do a sponsored run to raise money for The Christie charity.

The money raised by The Christie charity from the Wilmslow Running Festival event will go towards plans to develop a new £26m cancer centre in Macclesfield.