CIA veterans trained Ukrainian snipers during secret trips to the country after Russia invaded the Crimea peninsula in 2014, it is claimed

Ukrainian soldiers were trained by CIA veterans after Russia’s invasion of Crimea in 2014 according to reports, which officials believe is what is helping them in their war against the Kremlin today.

According to Yahoo News, six former CIA officials have said they can recognize their training in the current war on Ukraine through the resistance of the nation’s soldiers.

‘I think we’re seeing a big impact from snipers,’ one former senior official told Yahoo, ‘Especially as Russian forces get bogged down from lack of supplies.

‘I think the training really paid off.’

Within their training following the 2014 invasion of Crimea, the CIA are said to have trained the Ukrainians to avoid electronic surveillance of the Russians.

This comes as the Pentagon estimates at least 7,000 Russian troops have now died in the fighting, with another 14,000 to 21,000 having been wounded, accounting for nearly a fifth of the estimated 150,000 men that Putin amassed on the border before before giving the order to attack 21 days ago. 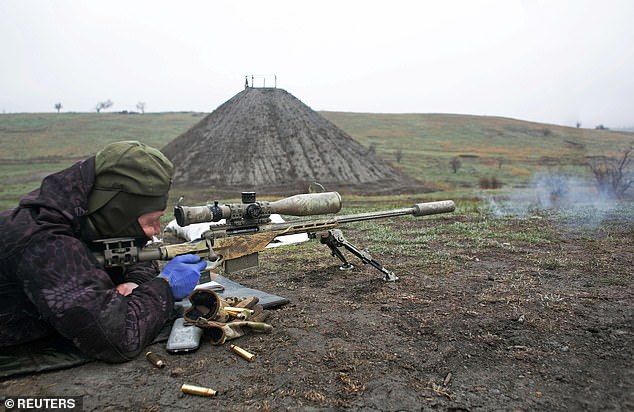 Ukrainian soldiers were trained by CIA veterans after Russia’s invasion of Crimea in 2014 according to reports, which officials believe is what is helping them in their war against the Kremlin today (Pictured, a sniper of the Ukrainian armed forces firing his rifle during training at a firing range near the town of Marinka in the Donetsk region, in April 2021)

During the three weeks of war since Putin invaded Ukraine on February 24, the Ukrainian army has killed four Russian generals.

High-ranking Russian general Major Oleg Mityaev was killed during fighting in the south eastern city of Mariupol on Tuesday, Ukrainian officials have claimed.

Major General Andrei Sukhovetsky, 47, was shot dead by a sniper near Mariupol which has seen a brutal siege of Russian forces for days.

Russia’s large-scale invasion of Ukraine has seen the Ukrainian military holding key cities despite aggressive Russian advances, which has seen shelling and missile attacks on the war-torn country.

But losses for Russia’s troops are now so severe, US intelligence believes some Russian units cannot keep fighting – and against expectations, the Ukrainian military have defied a rapid collapse and have instead inflicted huge hits on the Russian materials and men on the front line.

The CIA program in Ukraine operated for some years after the annexation in 2014, say former officials.

US Paramilitaries who were in Ukraine were pulled out of the country ahead of the start of the Russian invasion in February, but they are said to have reported to their superiors that the Ukrainians were ‘ready for battle’.

They reported that the battlefield between Ukraine and Russia was a ‘shock’ to the CIA because Russian soldiers were using drones, cell towers and other equipment against Ukrainians on the front line.

This was something one former intelligence official said helped Russians target Ukrainians, with soldiers using mobile phones ‘in a trench’, he said, ‘People were getting blown to bits.’ 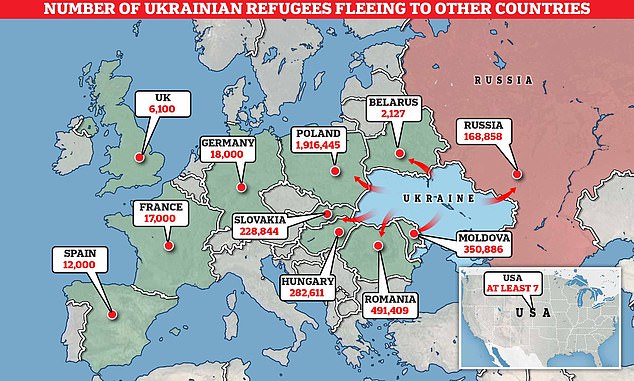 They described the eastern edge of Ukraine as something out of a Terminator movie, with the weaponized artificial intelligence systems on Russia’s side of the fighting.

The CIA program was kept very small, with only single digits of paramilitaries being sent out to eastern Ukraine to help minimize the exposure of the intelligence agency.

With the low-profile in mind, the agency’s engagement was limited to advising and training but no direct combat from the CIA themselves.

Since the start of the Russian invasion, the number of Ukrainians fleeing from their country passed three million on Tuesday, according to the UN.

Those escaping fighting and Russian bombardment are rising in numbers after Sunday’s Russian strike on the Yavoriv military base near Lviv, with some people from western Ukraine having now joined the refugee flow across the border.

Readers of Mail Newspapers and MailOnline have always shown immense generosity at times of crisis.

Calling upon that human spirit, we are now launching an appeal to raise money for refugees from Ukraine.

For, surely, no one can fail to be moved by the heartbreaking images and stories of families – mostly women, children, the infirm and elderly – fleeing from Russia’s invading armed forces.

As this tally of misery increases over the coming days and months, these innocent victims of a tyrant will require accommodation, schools and medical support.

All donations to the Mail Ukraine Appeal will be distributed to charities and aid organisations providing such essential services.

In the name of charity and compassion, we urge all our readers to give swiftly and generously.

TO MAKE A DONATION ONLINE

To add Gift Aid to a donation – even one already made – complete an online form found here: mymail.co.uk/ukraine

Via bank transfer, please use these details:

TO MAKE A DONATION VIA CHEQUE

TO MAKE A DONATION FROM THE US

US readers can donate to the appeal via a bank transfer to Associated Newspapers or by sending checks to dailymail.com HQ at 51 Astor Place (9th floor), New York, NY 10003