Skip to content
HomeWorld NewsClubber, 20, needed surgery after throwing herself out of moving taxi

Clubber, 20, needed major face surgery after throwing herself out of moving taxi after row with driver

A waitress needed major face surgery after throwing herself out of a moving taxi after a row over the fare ‘turned violent’.

Shannon Wiwczaryk, 20, said she ‘acted on instinct’ when she jumped out after her cousin got into a brawl with the cab driver who sped off with her still in the car.

Shannon shattered her jaw in two places and suffered severe bruising after the incident which happened after a night out at Gossip, a club in Hanley, Staffordshire, with her cousin Arlom Spillane, aged 19, and a friend.

She said a row erupted over the fare when they noticed the cabbie didn’t have the meter running. She said the driver got out of the vehicle and pulled open the sliding door before getting into a ‘scrap’ with Arlom.

When Arlom managed to break free and climb out, the driver sped off with Shannon and her friend still inside at around 4am last Sunday. 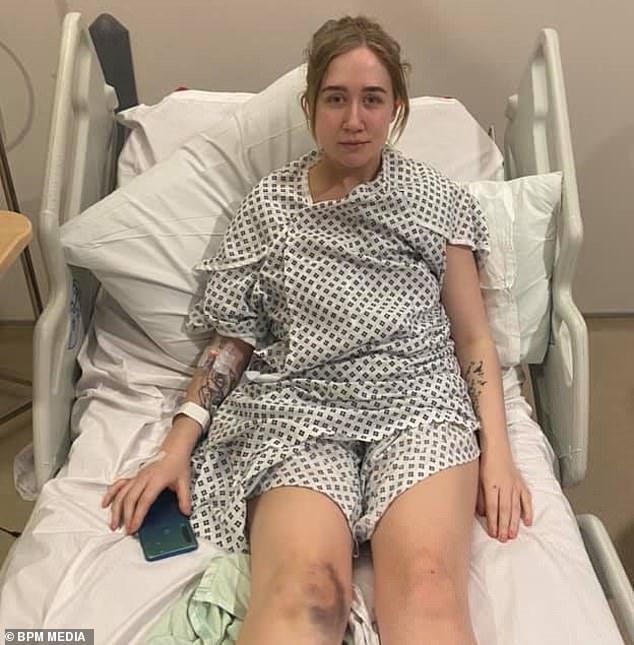 Shannon Wiwczaryk, 20, said she ‘acted on instinct’ when she jumped out of the cab 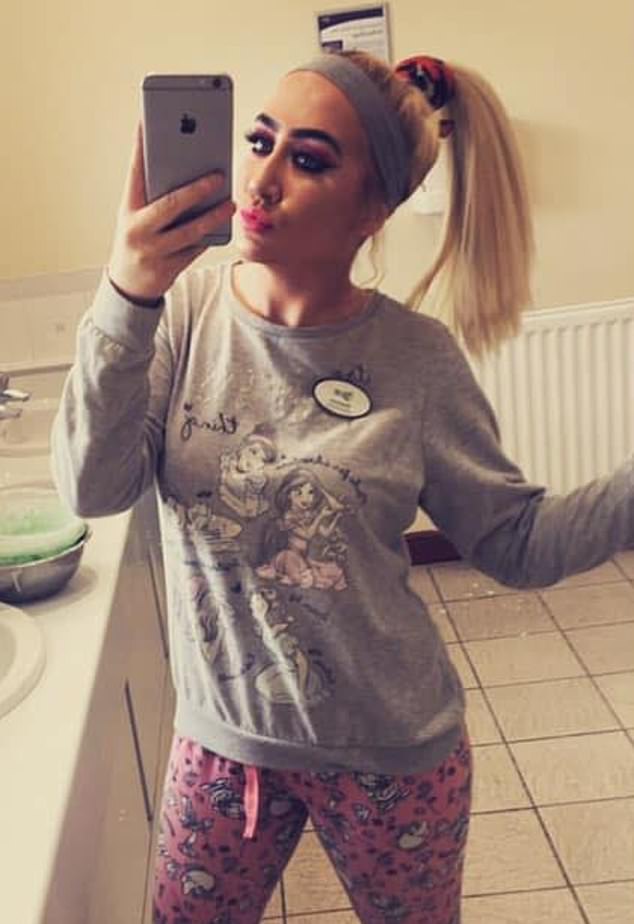 Shannon said: ‘Arlom went to push him away but the driver got on top of him and they ended up scrapping on the minibus floor. They both fell on top of me.

‘Arlom managed to get out and hold the door open so me and my friend could get out. But the taxi driver got back in the front and started driving off.

‘Arlom was running alongside but he had to let go of the handle as the driver sped up.

‘I saw the panic in his face and just jumped out. It was complete instinct. My feet went underneath and my face smashed into the ground.

‘The driver then slammed the brakes on and my friend was able to get out.

‘If I didn’t jump out of the taxi I dread to think what could have happened. I think he would have just kept going with me and my friend inside. I was scared for my life.

‘I picked up my phone and immediately knew something was wrong with my face. I was having to hold my chin.

‘The police eventually came and then dropped me off at hospital.’

Shannon was discharged from the Royal Stoke University Hospital four days later after undergoing surgery to fix her mouth.

And she is now asking for the public’s help to find witnesses or CCTV of the terrifying incident.

Shannon, from Newcastle-under-Lyme, said: ‘Me, my cousin and a friend got in the taxi outside Pink at about 4am. We got the money out to pay as I know some drivers like proof.

‘We handed over £10 but it doesn’t usually cost that much so we checked we’d be getting change.

‘Partway through the journey my friend noticed the meter wasn’t running and that’s when the driver started shouting.

‘We asked to get out. There was a lot of back and forth with us demanding he stop.

‘He eventually pulled over but then he opened the side door and got in Arlom’s face.

An X-ray revealed Shannon’s jaw had broken in two places and required an operation to insert titanium plates and pins.

She also needed 15 stitches on the outside of her chin and 20 inside her mouth. 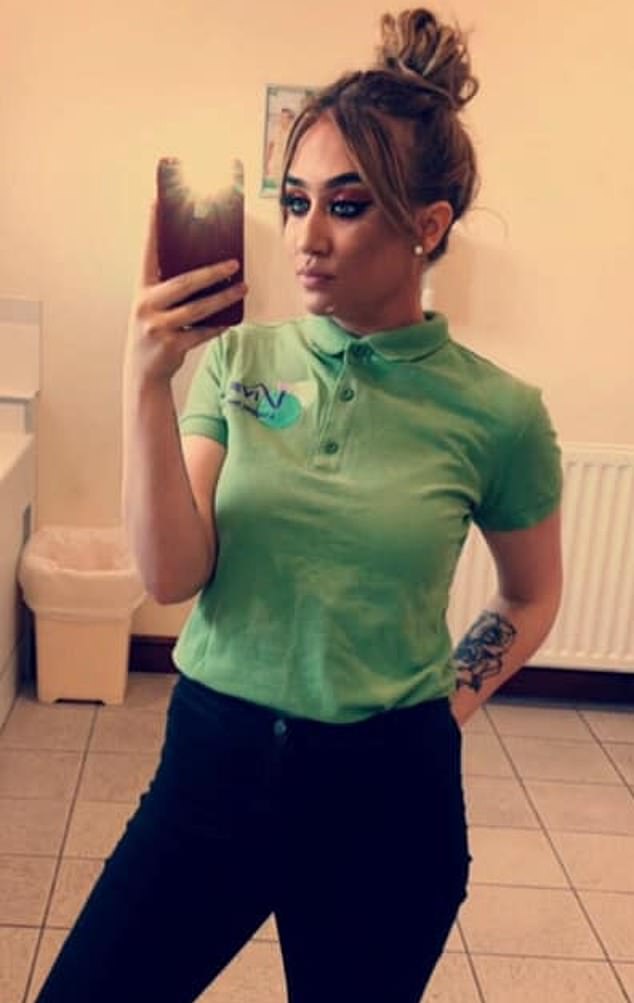 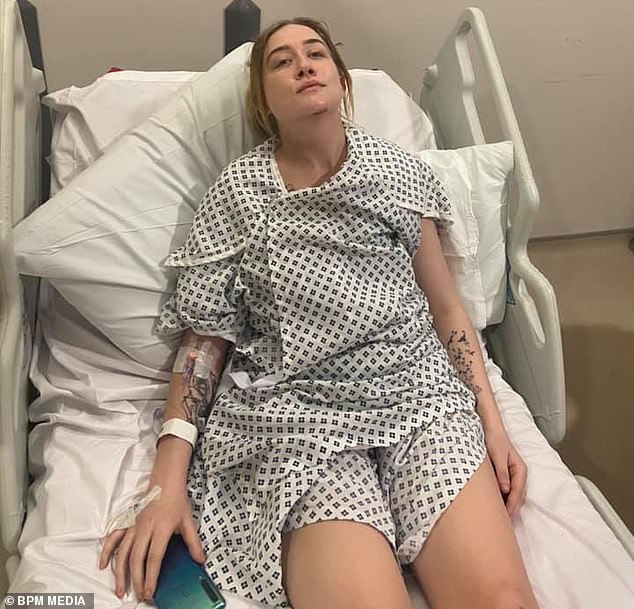 Shannon added: ‘I’m not allowed to work and I’m on a liquid only diet for four to six weeks. I can’t do anything. It even hurts to talk as I can only open my mouth a little bit.

‘I’ve got two screws and eight pins holding my mouth together and I just have to wait for it to heal.’

Shannon had been planning to start an entertainment hotel job in Cyprus with Arlom in a few weeks and had been working part-time at The Milehouse to save up.

But she is now unsure whether she will be able to take up the position.

‘The police only came to interview me in hospital on Wednesday, four days after it happened.

‘They are trying to get CCTV but the Jubilee 2 camera didn’t pick us up so we’re asking for witnesses to come forward.

‘We are hoping that someone has seen something to back what happened.’

Details of the terrifying incident were shared by Craig Spillane who is a father figure for Shannon and dad to Arlom.

The 41-year-old, of Talke Pits, said: ‘It all started when they asked for meter to be put on because they didn’t want to be overhcarged.

‘The driver knew Shannon wanted to get out of the taxi but he just drove off.

‘Straight away she knew she was hurt. She called 999 and the police came and took her to A&E.

‘She’s in a bad way with severe bruising but it could have been a lot worse.

‘She’s meant to be moving to Cyprus in four weeks with Arlom and now the four weeks hard graft she had planned to take money with her are out the window.

‘The police have interviewed her and we’ll just have to see how the investigation goes.

‘I’m just very disappointed. Taxi drivers have to be licensed but these things are still happening.

‘Since posting on Facebook lots of people have been in touch to say they have had problems with drivers not putting their meters on. The system needs looking at.’

A Staffordshire Police spokesman said: ‘Police have received reports of an incident where a woman suffered facial and leg injuries as she got out of a taxi.

‘It took place at approximately 4.30am on Sunday morning in the Brunswick Street area of Newcastle-under-Lyme.’