‘Mommy, they lit me on fire’: Connecticut boy, 6, is hospitalized with severe burns and will be scarred for life after eight-year-old bully soaked tennis ball in gasoline, lit it and threw it at his FACE

A six-year-old Connecticut boy is hospitalized with severe burns to his face and legs after he was intentionally lit on fire by another child, who poured gasoline on a tennis ball, lit the ball on fire and threw it at the child’s face.

The youngster, identified as Dominick Krankall, survived the vicious attack but is suffering from severe second-and-third degree burns to his face and legs.

‘My six-year-old brother could’ve died. The kid covered a ball in gasoline, lit it on fire and threw it at him. All in a matter of seconds,’ wrote the victim’s sister, Kayla Deegan, on a GoFundMe page.

‘He’s going to be scarred for life mentally and physically.’

The horrific attack happened Sunday when Dominick was playing in the backyard of his family’s home located on Louisiana Avenue in Bridgeport, Connecticut, with a group of children, who are reportedly tenants in the home.

According to Deegan, the eight-year-old neighbor entered a shed on the property and somehow got hold of gasoline and lighters and called Dominick over.

She said after the bully threw the fireball, then ‘ran away and watched him [Dominick] burn,’ NBC News reported. 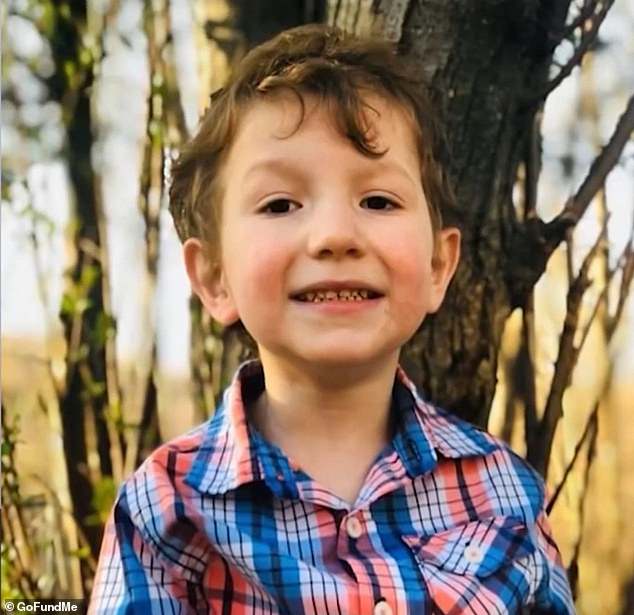 Little Dominick Krankall, 6, was lured by an 8-year-old to meet him around the corner where the neighbor proceeded to allegedly pour gasoline over a tennis ball, light the ball with a lighter and throw the fireball directly at Dominick’s face 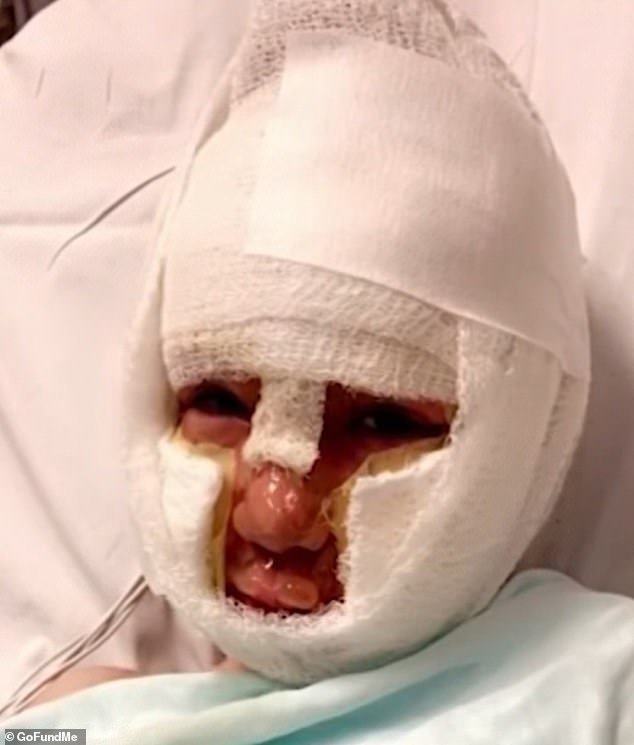 Family members shared a heartbreaking image of Dominick’s face, which is swollen and covered in bandages covering most of his little face. The boy suffered severe burns to his face and legs 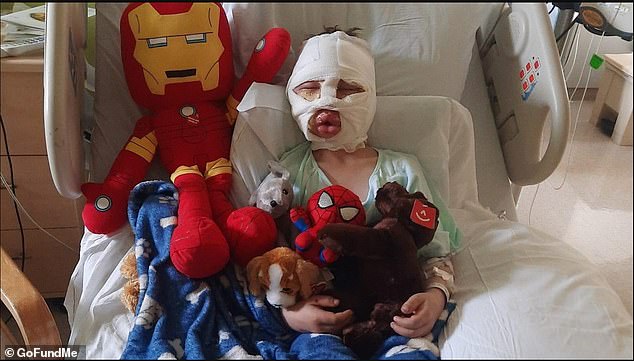 Dominick, pictured here surrounded by stuffed animals, was taken to the burn unit at Bridgeport Hospital shortly before 4 pm on Sunday

The City of Bridgeport’s public information officer, Scott Appleby, was unavailable when DailyMail.com called regarding the investigation into the case.

The Bridgeport Office of Emergency Management said in a statement that preliminary reports indicated that up to four unattended children were seen playing with gasoline and lighting objects on fire, NBC reported.

Family members said this is not the first time Dominick has been beat up by the neighbor, and a previous incident also put him in the hospital.

‘He has a history of bullying, and he has gotten away with too much. The mother thinks he is innocent. The family thinks it’s a joke,’ Deegan wrote.

‘Even though Dominick can’t talk because he’s in a lot of pain and all swollen, he said to my mom, ”Please don’t take me back there.”

‘This is extremely unfair and shouldn’t ever happen to ANY CHILD!!! We need justice for our little Dominick,’ she added, using the hashtag ‘justicefordominick.’

As of Tuesday evening, no charges have yet been filed against the 8-year-old suspec, NBC New York reported.

‘It’s heartbreaking, it’s sickening to know the family. There’s nothing being done about this,’ Deegan told the news station. ‘This needs to be seen everywhere so everyone knows Dom’s story and what he had to go through, and the extent it went to for someone to hopefully do something.’ 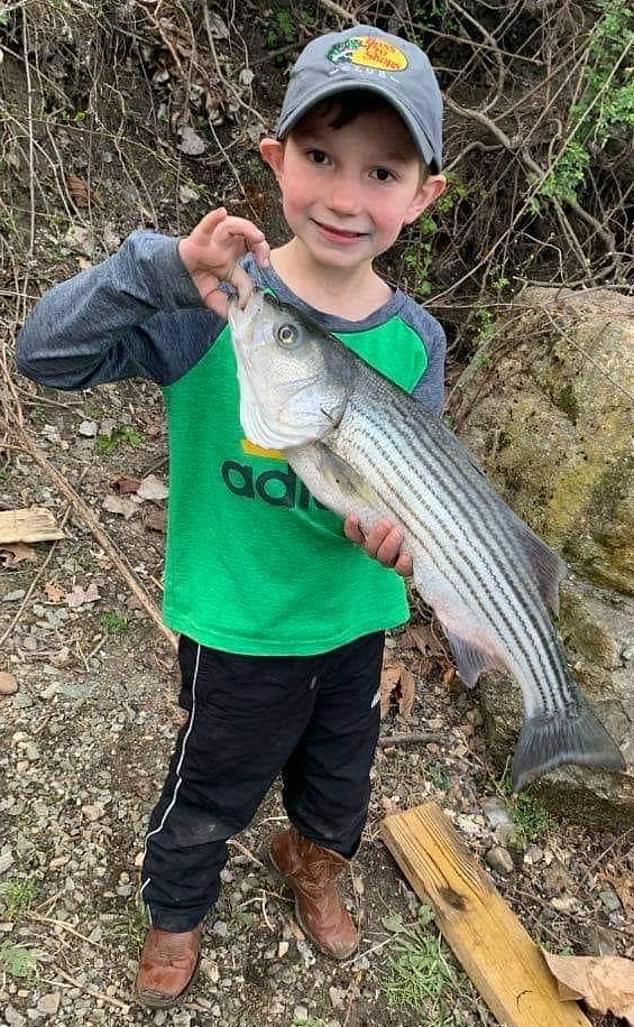 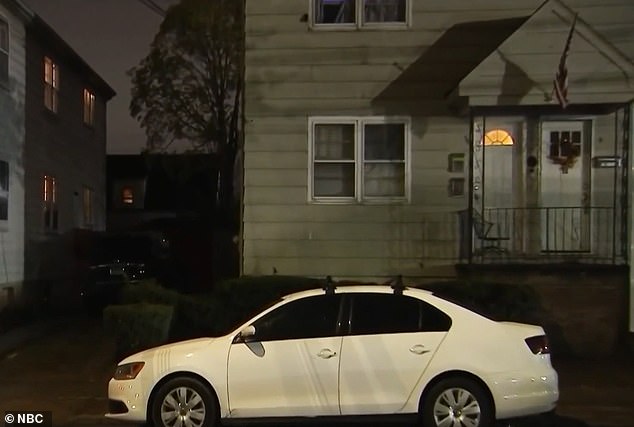 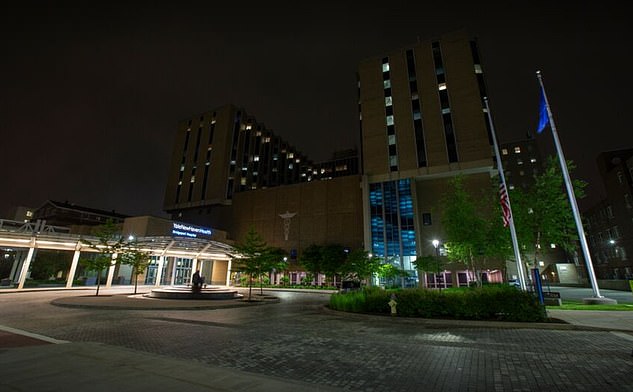 Now, the family is asking for donations that will go toward Dominick’s hospital bills and a new home.

‘It is not safe here. Anything helps, even a share. Thank you all for the support. I’m sure Dominick appreciates it,’ the family wrote.

As of Wednesday afternoon, their GoFundMe has amassed more than $58,000 donations, surpassing their initial goal of $50,000.