Conor McGregor attended the funeral of his late aunt in Dublin today after clarifying she was not a victim of coronavirus.

The UFC star, 31, was joined by his long-term partner Dee Devlin as they honoured the life of Anne Moore alongside 100 mourners during a mass service.

Over the weekend, the Irish mixed martial artist paid tribute to his ‘lovely’ relative in an emotional Instagram post, where many believed she had passed away from COVID-19 after ranting about the ‘stupid’ virus. 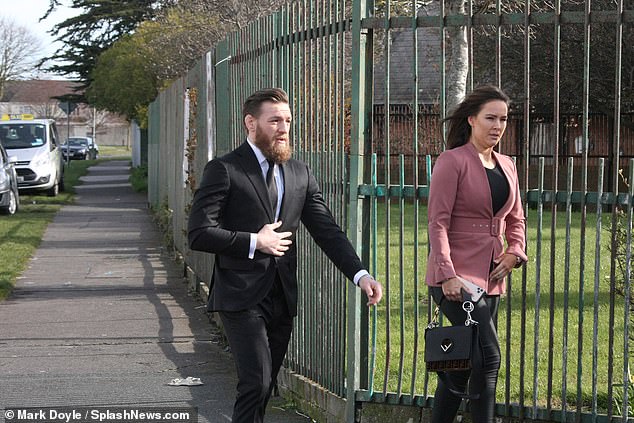 Mourners linked arms as they remembered the former featherweight champion’s late aunt at the traditional Catholic ceremony. It is not clear how Anne passed away.

Sportsman Conor received the news about his aunt over the phone shortly before he was due to go on television in Ireland’s capital to promote his ‘Proper No 12’ whiskey brand.

In a post announcing his family member had died, he wrote: ‘This stupid f****** virus. What the f*** is happening?’, leading many of his social media followers to believe Anne had died as a result of coronavirus.

In a later upload, Conor clarified she was didn’t pass away from the pandemic as he shared: ‘I want to clear up that it has been confirmed she was not a victim of coronavirus.

‘As we prepare for her funeral I know that many of us will confront the virus in the weeks ahead. 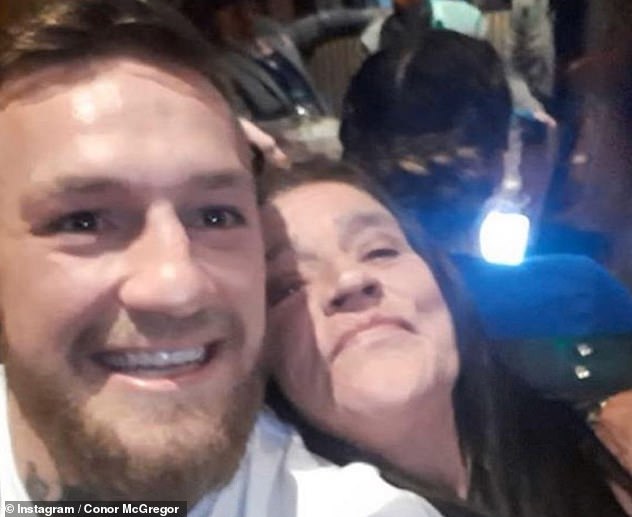 Over the weekend, the Irish mixed martial artist paid tribute to his ‘lovely’ relative Anne Moore in an emotional Instagram post (pictured together) 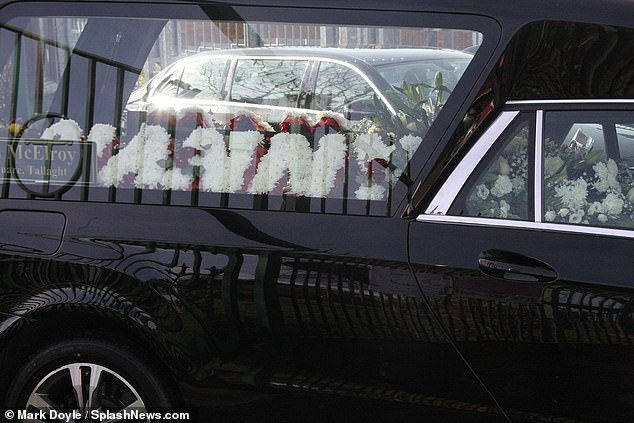 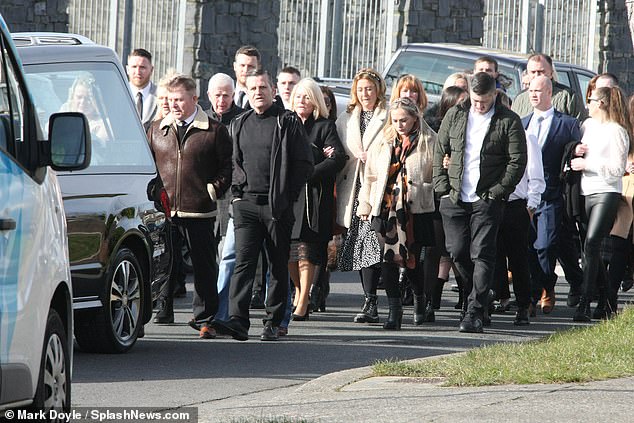 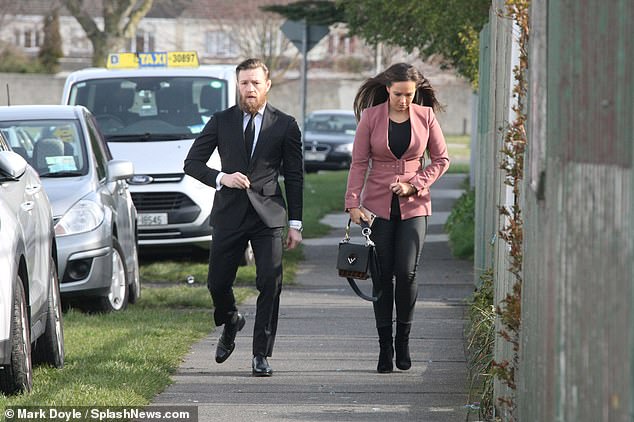 The UFC star, 31, was joined by his long-term partner Dee as they honoured the life of his beloved relative alongside 100 fellow attendees during a mass service 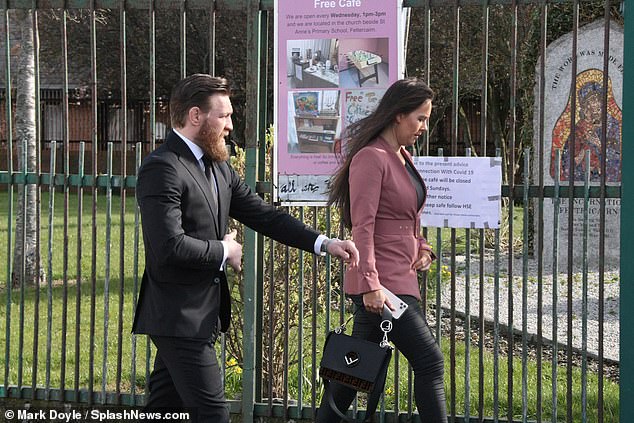 ‘As I gather with my family I ask you all to make an extra effort to be there for friends and family during the stressful days ahead. And from my family, thank you for your support at this sad time.’

There are 119 cases of coronavirus on the island of Ireland  – 90 in the Republic of Ireland and 29 in Northern Ireland. One woman died from the virus in Dublin.

Ireland closed all schools, colleges and nurseries on Thursday until March 29, with outdoor gatherings of more than 500 people banned amid the growing coronavirus pandemic.

Conor said he was no longer able to go on television and took his family to Bull Island, Dublin Bay, instead and ‘looked out at the sea’. 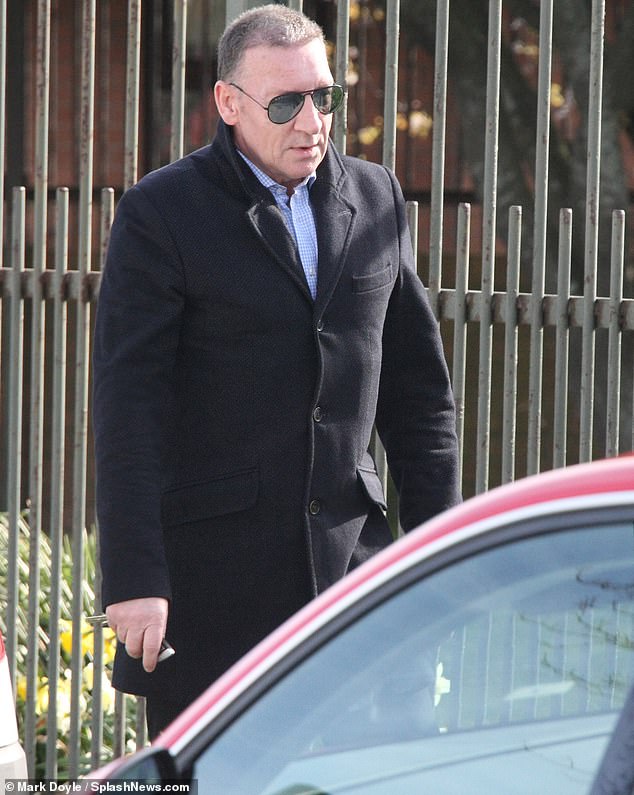 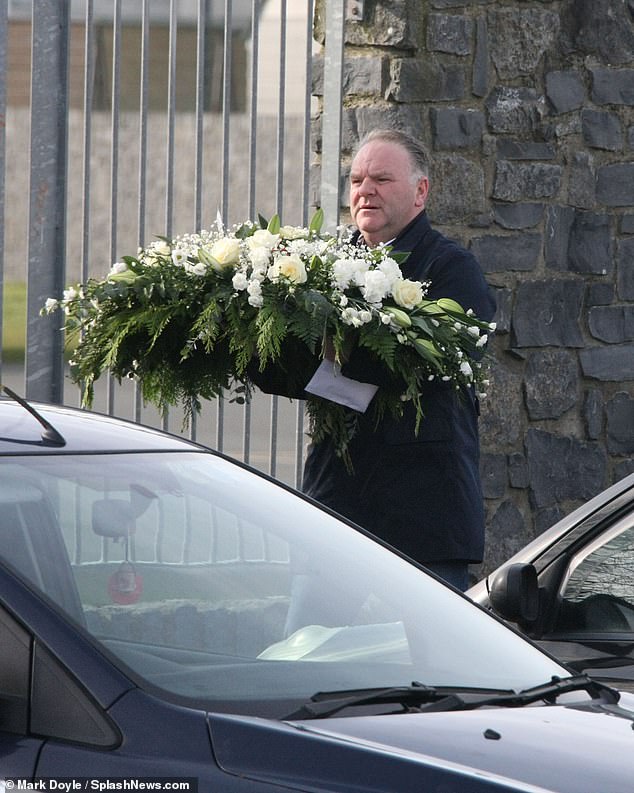 He posted a selection of photos, captioning: ‘I brought my family with me to the studio.

‘Sitting in the chair about to beam live to all the U.S morning talk shows, I get a phone call telling me that my lovely little auntie Anne had passed away.

‘I couldn’t go live anymore. My poor little friendly loving auntie. My mother’s sister. This stupid f****** virus. What the f*** is happening.

‘I took my family to Bull Island. Looked out at the sea. Took a deep breath. Thank f***! Lord thank you.

‘Stay tight people! We are all we got. Rest in Peace Anne Moore I love you.’

The Cage Warriors’ World Champion’s sister, Erin, also paid tribute to her aunt, posting: ‘Looking through all the photos thinking I’m so glad you took so many photos of us all together.

‘You to me are one of the strongest women I know. Nothing phased you and no matter what you just got on with it. I used to say ‘aunty ann you Moore ladies didn’t pass that gene on to me I’m a cry baby’ and you’d laugh.

‘You taught me what loyalty and love and strength between a family is all about.’

Earlier in his post, Conor wrote about Ireland’s containment of the coronavirus pandemic. 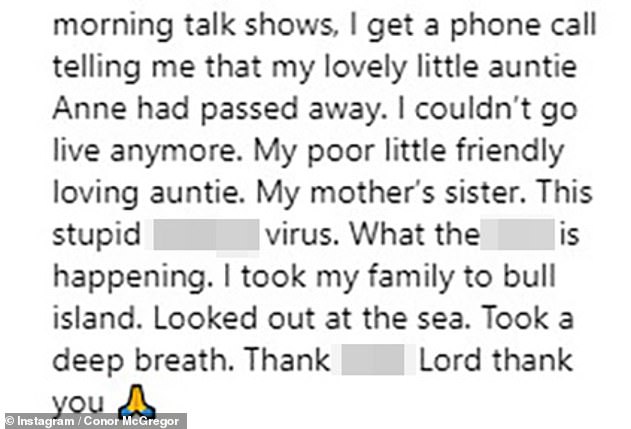 The Irish UFC star vented his fury at coronavirus, posting: ‘This stupid f****** virus. What the f*** is happening’, which led his followers to believe Anne was a victim of the virus 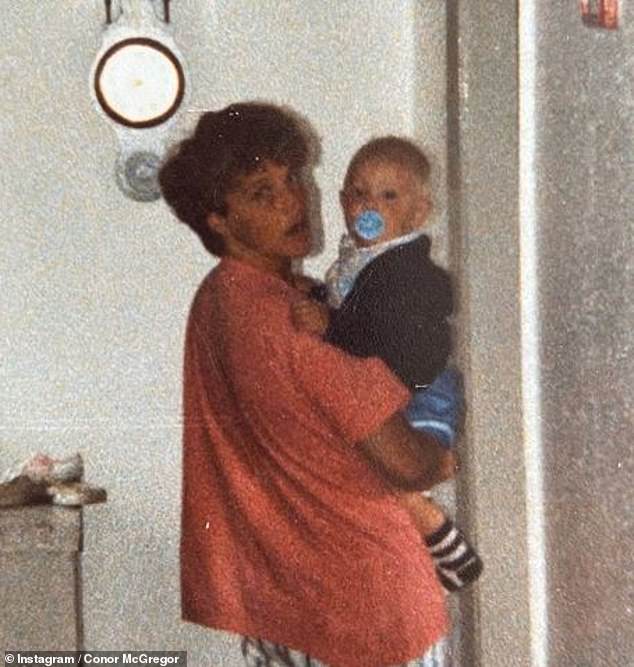 In a later post on Instagram, Conor confirmed his aunt had not died from coronavirus (pictured with Anne as a baby) 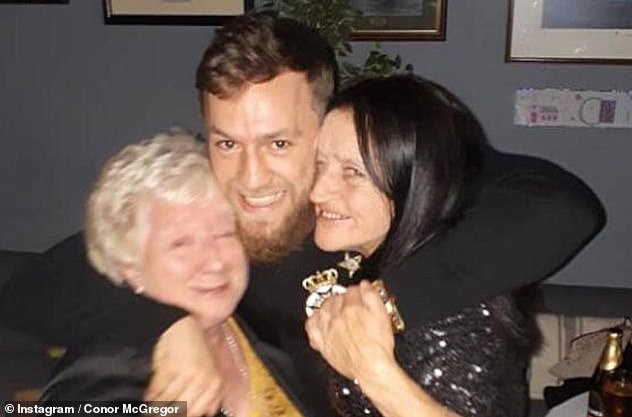 The ex-lightweight title holder posted a selection of family photos, saying:  ‘My poor little friendly loving auntie’ (pictured with Anne and another relative)

He said: ‘Ireland you amazing, amazing country. I believe we have this virus contained. And through this containment, we actually may have gone and contained them all.

‘The good habits we will have now gained from this wild Covid-19 attack will see us too strong in future. Hand hygiene. Touching of own face hygiene. Consistent thorough cleaning of handled areas hygiene.

‘What we should really be all doing anyway. I have always been on with my hand hygiene. But not enough. If I think of all the people approaching to shake hands and what not.

‘I often get people say to me please I don’t want a picture, just let me shake your hand. And I’m like yes friend thank you. As it’s more efficient than taking a full picture. But it’s too careless. And too frequent. 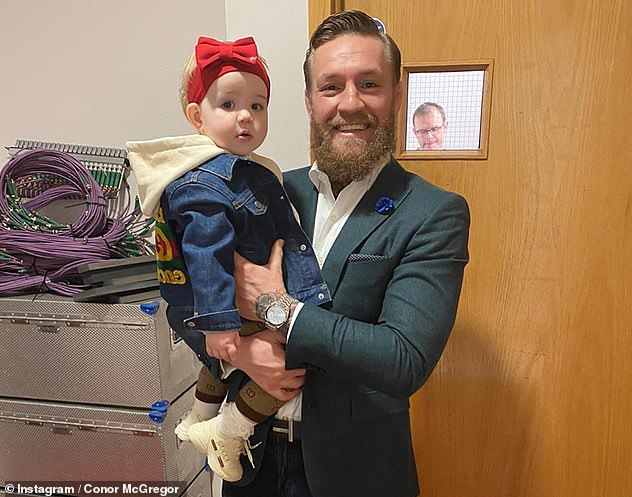 He also uploaded snaps with his daughter Croia, above, and a number of other family pictures. He was due to go on television to promote his ‘Proper No 12’ whiskey brand

‘Touching my own hand to my face as well. Too unaware of the frequency I’d do it. Until now. I’d train my a** off, to the point of low immunity. It’s inevitable with the intensity of the training.

‘The immune system will be tested. I would float around in this manner, and always end up catching little colds and flu’s. I feel bullet proof right now though! I’m switched on like a motherf***** now.’

Prime Minister Leo Varadkar made the dramatic announcement that all schools, colleges and nurseries will be closed in a speech given outside Blair House in Washington DC earlier this week.

He added that under the emergency measures, teaching will be completed online and museums, galleries and other tourist destinations will also close as a result of the action.

The UK has yet to announce similar measures despite the infection rate soaring by more than 200 yesterday to around 800 with 11 fatalities in total.

In a major escalation of the crisis, ministers are preparing to introduce emergency legislation early next week to allow all mass gatherings and sports events to be banned from next weekend.

It comes after sports bodies confirmed the postponement of the Marathon, the suspension of football matches and the cancellation of the England cricket team’s Sri Lanka tour.