The race is on to solve UK CO2 supply crisis: Industry warns there are just eight weeks to find a ‘long-term solution’ after ministers broker a deal that will see prices rise threefold – but will only see the UK through Christmas

Industries reliant on carbon dioxide have just eight weeks to find a long-term solution to the impact of soaring prices after ministers brokered a deal to ensure supplies up to and through Christmas.

Spiking energy prices forced a major CO2 producer, CF Fertilisers, to shut down its two UK plants last month as the Government stepped in for three weeks to prop up the firm in a move that was expected to cost taxpayers tens of millions of pounds.

The situation put pressure on CO2 supplies which are used across numerous key industries including stunning animals for slaughter, extending the shelf life of food, producing fizzy drinks, aiding in surgical operations and cooling nuclear power plants. Carbon dioxide is a by-product of fertiliser manufacture and the US firm supplies around 60 per cent of the UK’s needs.

The Government has now helped secure a temporary fix, lasting until January 2022, which will see CO2 suppliers pay a higher price to CF Fertilisers for the gas, ensuring production remains viable.

MailOnline understand that the deal means a price increase from 0.3p per litre to more than 1p per litre.’

But there are fears that while this will being short-term certainty it is partly pushing the problem down the road, while the country is reliant on a small number of producers who are themselves at the mercy of global gas prices.

An industry source told the Telegraph said: ‘We have eight weeks to sort out the long-term solution.’ 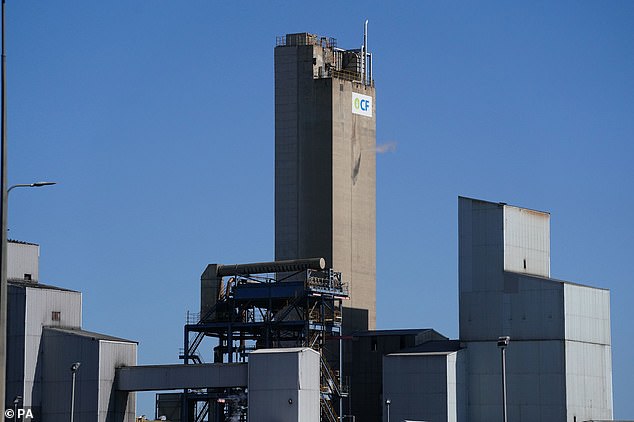 Spiking energy prices forced a major CO2 producer, CF Fertilisers, to shut down its two UK plants last month as the Government stepped in for three weeks to prop up the firm in a move that was expected to cost taxpayers tens of millions of pounds 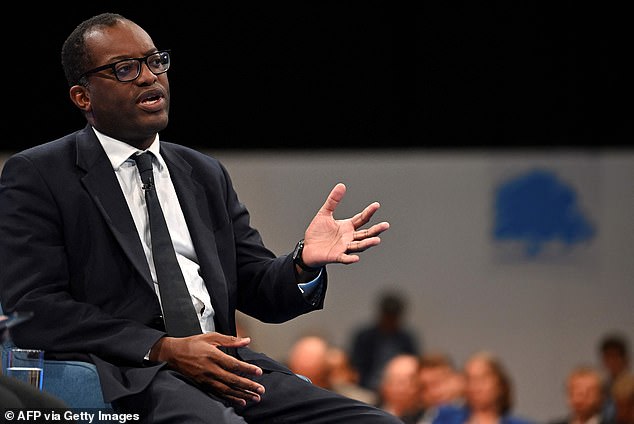 Business Secretary Kwasi Kwarteng said the agreement means ‘critical industries can have confidence in their supplies of CO2 over the coming months without further taxpayer support’.

However, there are fears that a higher purchasing price will be passed onto consumers, hitting families in the pocket, while the short term nature of the deal has prompted concerns about the UK’s long term supply of CO2.

The shortage is part of a storm of crises the Government is accused of failing to get a grip on, including a shortage of fuel and 100,000 HGV drivers, a lack of food processing workers and butchers due to the pandemic and Brexit, gaps in the global supply chain and the highest rise in energy prices for decades hitting households and businesses.

The PM has brought in the former boss of Tesco, Sir Dave Lewis, to unblock Britain’s choked supply chains.

Meanwhile, desperate steel, chemicals and glass factories today pleaded for tax breaks to help them cope with soaring energy bills – as Boris Johnson prepares to sign off hundreds of millions of pounds in loans to keep them afloat.

Energy-intensive businesses insisted cutting taxes and levies was more important than a bailout, after an extraordinary bout of wrangling in Whitehall.

Mr Johnson appears to have sided with Business Secretary Kwasi Kwarteng following his spat with Chancellor Rishi Sunak over the need for government support.

A package is now due within days, but rather than handouts or a price cap on industrial energy costs, it is expected to come in the form of loans.

It is understood the support will also come with ‘strings attached’, ensuring companies cannot pay out big bonuses while they are benefiting.

The move could raise concerns that the government is merely kicking the can down the road, as firms will have to repay the costs later when energy prices have settled down.

The Treasury is said to have been alarmed at the prospect of doling out more cash, warning that ‘demands simply increase’ when sectors know the Chancellor is involved in the process.