At her home in suburban Detroit, Jill Warren spent her Thursday morning glued to the phone, searching for news about the woman she fiercely believed should be the next president of the United States: Senator Elizabeth Warren.

Voter Warren had known that candidate Warren (no relation) was lagging badly and would likely drop out. Still, the news of the Massachusetts senator's departure from the presidential primaries was devastating – not only because of how the senator's message had resonated with her but because the exit was a final blow to hopes, once so bright, that a woman would be chosen to face US President Donald Trump in November. 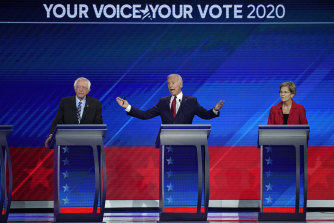 But this week, Walsh was left to muse on how early Democratic primary voters were acting out of fear and caution and were buying "a false narrative out there that women candidates are too risky".

"This was the year that the Democrats were hell-bent on winning," Walsh says. "A woman was defeated in 2016. There was all this talk after that, trying to explain, 'How did Donald Trump happen?' And this caution and fear has largely motivated us to the place we are right now."

All this, Walsh says, despite the great political success by female candidates in 2018, in Congress and in statewide races, showing that "as we have always said, when women run they win at about the same rate as men do in comparable races. We saw it across the board in 2018 and frankly in 2016, when more people voted for Clinton than Trump."

But the women in the race this time could not compete. Minnesota Senator Amy Klobuchar peaked with a third-place finish in New Hampshire but fell fast after failing to build the sort of racially diverse coalition needed to win a Democratic primary. Warren's third-place showing in Iowa was her best, despite building a large national operation and surging last summer to the top tier. Hawaii congresswoman Tulsi Gabbard remains in the race but has picked up only two delegates, hundreds behind the two men leading the race, former US vice-president Joe Biden and Vermont Senator Bernie Sanders.

Warren in particular came to embrace her role as the choice for voters, particularly female voters, who thought it time for a woman to be president. But there was little evidence that female voters were prioritising gender this time around; Biden pulled ahead with female voters in most states on Tuesday – including in Massachusetts, Warren's home state.

Many voters say progress has been made even though a woman won't be at the top of the ticket. And there is a broad expectation that both Sanders and Biden will feel pressure to name a woman as their running mate.

Still, the frustration among some voters was palpable. A younger Warren supporter, LaShyra Nolen, the first black woman to be elected student council president at Harvard Medical School, says it's not enough to have women on the ballot. Voters then need to step up and support them, she says. "I still do believe we are living in a society that is ridden by patriarchal control and inequality," says Nolen, 24, of Los Angeles.

For some, the dimming of women's political fortunes felt like a marker of a fading movement. The #MeToo movement may have toppled powerful figures across industries, but some of the momentum behind gender equality is tapering off, believes Kaitlin Cornuelle, a 29-year-old director and writer in Los Angeles. That may have an impact on how engaged women – voters critical to Democrats' calculus in November – will be, she says. "It makes me really frustrated that we have three men who are in their late 70s, early 80s that cannot relate to me and cannot relate to most of the people in this crowd," Cornuelle says, referring to those gathered around her at a Warren rally ahead of Super Tuesday.

If anyone knows about painful losses it might be Clinton, who won popular vote in 2016 but not the job. "There still is a double standard. There are still a lot of biases about women becoming president. But I made a lot of progress, and I was thrilled that so many women ran this time," Clinton, who did not endorse anyone in the primary, said on Wednesday at a New York screening of an upcoming documentary on her life. "We just have to keep going until we crack that final big glass ceiling."