London: Prince Andrew will not take part in next year’s Platinum Jubilee Trooping the Colour, as royal sources admitted on Thursday there were “difficult discussions” to be had about his military titles.

There is increasing concern behind palace walls about the crisis engulfing the Duke, with senior members of the Royal family kept in the dark about his legal position. 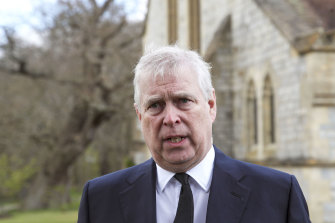 Prince Andrew speaks outside a memorial service for Prince Philip earlier this year, in a rare public appearance.Credit:PA

The civil lawsuit lodged this week in New York alleging sexual abuse against Prince Andrew has ensured he is highly unlikely to return to public duties.

Members of the Royal family, including the Prince Charles, fear the damage his friendship with Jeffrey Epstein has caused to the monarchy is already too great. As such, his military titles, including Colonel of the Grenadier Guards, will eventually have to be removed, senior royal sources said.

One source said: “It is difficult to envisage how the Duke will be able to retain his military titles. At some point, if and when it is accepted that he will not return to public life, there will be some difficult discussions to be had.” 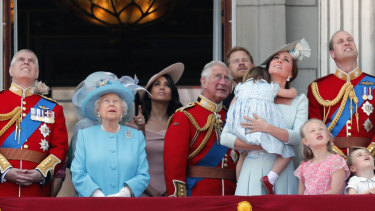 Trooping the color in 2018: Today, things are not looking up for Prince Andrew.Credit:AP

Another aide said: “He will not be able to take part in Trooping the Colour next year if the Epstein scandal is still hanging over him, and no one can see this going away any time soon. He will have to be replaced.” They added: “How could he possibly retain his military titles?”

Prince Charles last night travelled to Birkhall, his Scottish residence, prompting speculation that he could be headed for crisis talks with Prince Andrew, who is staying with the Queen at Balmoral, around seven miles away.

Sources close to him declined to comment on the prospect of a showdown, insisting there was no guarantee the two would meet. Prince Charles and Camila, Duchess of Cornwall holiday at Birkhall every summer.

Prince Andrew’s accuser, Virginia Roberts Giuffre, launched civil proceedings in the US this week, alleging “rape in the first degree”, sexual battery and sexual abuse. Prince Andrew has previously denied the claims. Questions are now being asked about the legal strategy adopted by his team, headed by criminal defence solicitor Gary Bloxsome, amid fears that the silence is causing further damage.

Meanwhile, Dame Cressida Dick, the Scotland Yard Police Commissioner, yesterday said “no one is above the law” as she disclosed that the force would review its decision not to investigate whether crimes relating to Epstein’s activities were committed in London.

The Yard has twice ruled out opening an investigation into Giuffre’s allegations that she was trafficked and forced to sleep with the Duke. Dame Cressida said that in light of the civil suit, the case would be reviewed.

Prince Andrew is Vice-admiral in the Navy, Commodore-in-Chief of the Navy’s Fleet Air Arm and Admiral of the Sea Cadet Corps. He also still holds honorary military titles. A senior Navy source said: “It’s time for him to let the relevant organisations in the military know that because of ongoing allegations… he will stand down so as not to embarrass the nation.”

Get a note direct from our foreign correspondents on what’s making headlines around the world. Sign up for the weekly What in the World newsletter here.