Recep Tayyip Erdogan, the Turkish president, is sorely testing the patience of the NATO alliance following his demand for an emergency summit to discuss the recent escalation of tensions in Syria. 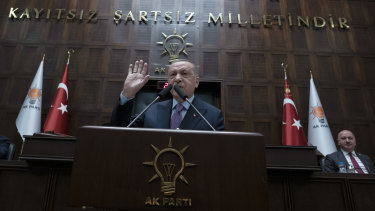 Ankara made the request after 33 of its soldiers were killed in north-west Syria by forces loyal to Bashar al-Assad, Syria’s president, this week.

The request was made under Article 4 of NATO's Washington Treaty, which stipulates that any ally can request consultations when they believe their territorial integrity, security or political independence is threatened.

It is only the sixth time in the alliance's 71-year-old history that such a request has been made, which is one step short of Article 5, which deems that an attack on any one member of the 29-strong alliance is treated as an attack on all NATO member states.

Attempting to placate Erdogan, NATO ambassadors meeting in Brussels on Friday offered their condolences and called on the Assad regime and its Russian backers to stop attacking Idlib province, where the soldiers died. 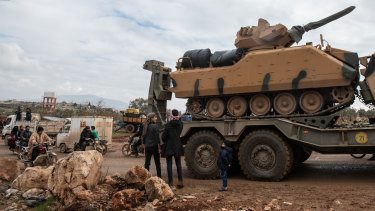 Turkish Military’s armoured vehicles that crossed to Syria drive pass in a road in village of Aaqrabate in Idlib, Syria. Credit:Getty

But while NATO is keen to offer a degree of reassurance, there is deep unease about the way the Turks are conducting themselves in Syria, and the veiled threats being made to Europe if it fails to provide backing.

Turkey's military operations in north-western Syria are controversial, to say the least.

Ostensibly the Turks claim they are trying to prevent a fresh surge of Syrian refugees fleeing across the Turkish border as the Assad regime steps up its efforts to recapture the last rebel stronghold in Syria.

But the Turks have their own agenda – supporting the numerous Turkish-backed groups operating in Idlib province, an area largely controlled by an extremist group closely associated with al-Qaeda.

The fact that Turkey is breaching Syria's territorial integrity somewhat undermines Ankara's claim that its sovereignty is under threat. The Kremlin has accused it of breaching a 2018 ceasefire by using artillery and drones to defend rebel positions.

Nor has Turkey endeared itself to the rest of Europe with threats to flood the continent with Syrian refugees.

It remains to be seen how far the Turks will follow through with the threat, but that Turkish officials are talking in these terms raises serious questions about their commitment to NATO's central doctrine of "one for all, and all for one".