Thousands of people have been ordered to evacuate three Victorian towns as swollen rivers threaten communities across the state in what authorities have called a “significant flood emergency”.

The State Emergency Service issued an evacuation order for the town of Rochester, south of Echuca, just after 5pm on Thursday, warning between 250 and 450 properties would be “directly impacted by flooding”. Two hours later, people in the town of Carisbrook, near Maryborough, were also ordered to leave.

Just after 7pm a similar order was issued for Seymour, which is preparing for flood levels not seen since 1974.

“If you live, work or are holidaying in this area, you should evacuate immediately,” the SES said.

Seymour resident Julie Wallis had earlier watched her possessions being washed away. “They’ve all just floated by, I’m just hoping the trailer doesn’t float by,” she told Nine News.

“It’s the biggest that we’ve seen in the area. We had floods in ’94, but nothing like this,” Kerianne Speechley said.

SES chief operations officer Tim Wiebusch said there was the potential to impact 197 properties in Seymour, and a further 279 properties may need to isolate.

In Rochester on Thursday evening, emergency services were door knocking homes but many residents had chosen to stay.

The town centre was quiet, although one pub was still serving customers in the early evening.

Resident Joyce Corcoran, who lives in a granny flat behind her daughter’s house, said she expected her own home would be safe, but the garage would probably get flooded.

“If I go under, the whole town’s stuffed,” she said

Corcoran said people in Rochester were feeling very nervous. “Especially the elderly. But everybody’s working together.”

Wiebusch said Victoria’s north-east had received 200 millimetres of rain by Thursday with between 50 and 70 millimetres falling in other parts of the state. “We’re seeing significant flood and rain events unfold across Victoria,” he said.

The SES received more than 2000 requests for help by Thursday afternoon. Three hundred of those were due to fallen trees and the rest for flash flooding and support with sandbagging. By 5pm on Thursday there had been 55 rescues statewide.

Power was cut to about 25,000 homes during the day and motorists were warned of a landslide on the Great Ocean Road near Lorne.

The Bureau of Meteorology forecast further downpours from Thursday night into Friday morning.

The main rivers causing concern included the Campaspe (near Echuca and Rochester), the Goulburn (between Seymour and Lake Eildon in central Victoria), the Maribyrnong (in Melbourne’s north-west), the Ovens and King (near Wangaratta in the north-east), and Seven and Castle creeks (near Euroa in central-northern Victoria).

In Castle Creek at Euroa, major flooding was expected Thursday night and into Friday with levels not seen since 2010.

The upper regions of the Maribyrnong River are also under a Watch and Act, with major flooding expected to affect three houses and a local tavern.

Flooding is also expected in Shepparton from Saturday afternoon, similar to levels not seen since 1993. 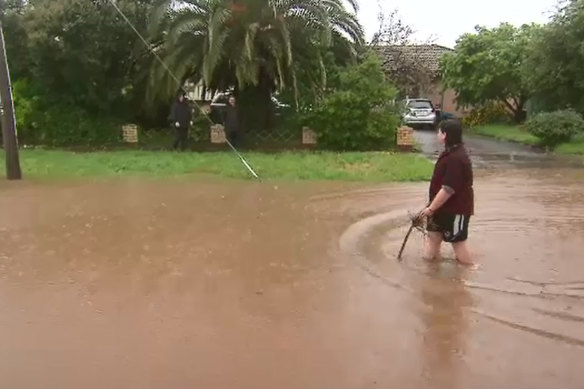 People in Seymour have been told to leave.Credit:Nine News

In Rochester, flood levels are forecast to reach similar heights to the last major flood in 2011. Wiebusch said up to 700 properties could become isolated and 50 could potentially see flooding above the floor. An evacuation centre has been established in Echuca.

On Thursday morning, Rochester residents shovelled sand into thousands of bags as the community prepared for the worst-case scenario.

The Rochester and Elmore District Health Service evacuated all its residents, patients and staff to other services.

Chief executive Karen Laing said authorities told her to evacuate the facility amid fears the floodwaters from the Campaspe River may reach the building. “The river is just behind us,” she said.

Laing said some staff members had sandbagged their homes and then joined the aged care residents being moved to other providers.

The hospital was evacuated in 2011 after floodwaters swept through Rochester. Laing said water reached the service’s doors then but did not come inside.

At the nearby St Joseph’s Primary School, principal Liz Trewick closed the school while volunteers stacked sandbags around vents to protect the site, which had been badly flooded in 2011.

Trewick said about 50 of the school’s 130 students had attended on Thursday, allowing parents to prepare their own homes and “keep the calm in the chaos”.

“There are a lot of families that are reliving 2011, so there’s a bit of trauma for parents,” Trewick said.

On Wednesday night, emergency services told a community meeting in Rochester the most likely scenario was a one-in-50 year flood, similar to the one that swept through the town in 1956.

Under a less likely prediction, the town could experience a one-in-200 year flood that would exceed the levels of 2011 when hundreds of houses and businesses in the main street were inundated. 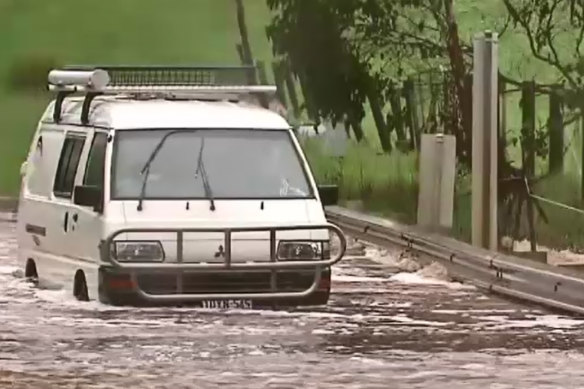 Flooding on the outskirts of Gisborne on Thursday.Credit:Nine News

The extreme weather has affected kindergartens and schools across the state, with 22 early childhood services closed and five state schools.

Echuca College asked families to collect their students because they had limited access to hygienic water due to the flooding.

“We are running on a skeleton staff due to the flooding impacts. Power interruptions are anticipated. Bus companies have enacted their safety plans,” a post on the school’s Facebook site read.

Coliban Water has asked residents in Echuca to boil their water after stormwater entered one of the treated water storage tanks. Drinking the water could cause gastro-like symptoms.

Wiebusch said La Nina and the negative Indian Ocean Dipole would bring above-average rainfall to Victoria over the next two months.

“We’re probably now looking at a period of six to eight weeks where we could see further rain events that further exacerbate existing flooding. And water storages are absolutely full. Our catchments are absolutely saturated. So every time we see reasonable rainfall totals unfortunately we’re going to see some communities back under flood warnings again. That’s quite possible.”

In Rochester, Criterion Hotel owner Craig Mann said he would stay in the pub with his wife, but many of his friends and family were leaving.

Mann, who has only had the business for 12 months, said his business was not insured against floods.