A bad-tempered father who fatally injured his four-week-old baby by hurling into her cot because she would not stop crying more than 20 years ago has been cleared of her murder.

Dean Smith, 45, from Hertfordshire, threw Maisie Newell across her bedroom when she was a baby on August 26, 2000, leaving her with a fractured skull and brain injuries.

Maisie was subsequently left with life-changing injuries and was cared for by adoptive parents until she died at home with them on June 28, 2014, just before her 14th birthday.

In February this year, Smith had pleaded guilty to her manslaughter but denied murdering Maisie.

On Monday, a jury at the Old Bailey found him not guilty of murder following a retrial. 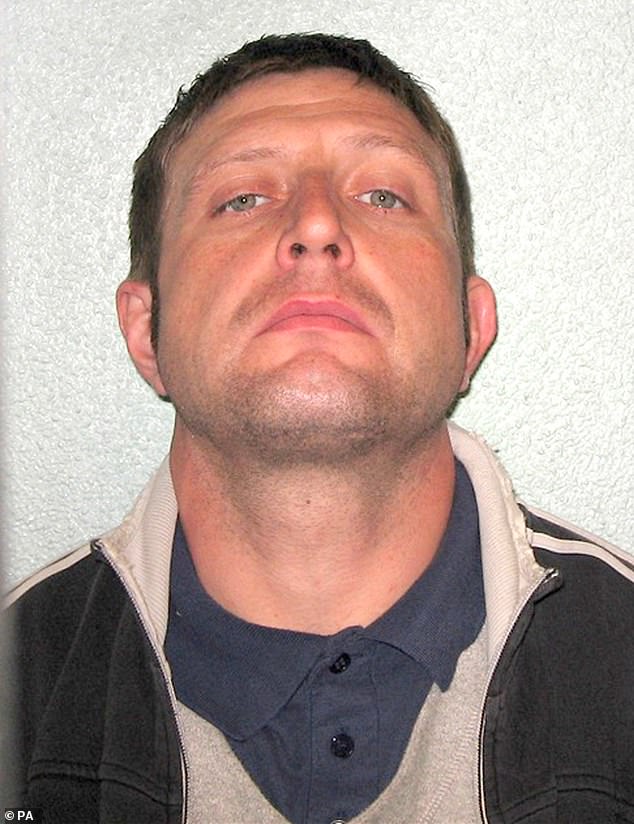 Dean Smith, 45, from Hertfordshire, threw Maisie Newell across her bedroom when she was a baby on August 26, 2000, leaving her with a fractured skull and brain injuries

Dressed in a navy suit, Smith wept with relief as the jury announced its verdict after deliberating for 11 hours and 58 minutes.

Judge Mark Lucraft QC adjourned sentencing in the ‘difficult case’ to November 12 and Smith was bailed ahead of the sentence.

The court had heard Smith had thrown Maisie across the room because he was furious he had been left to look after her on his own.

An hour before the incident, the warehouse worker shouted at the baby’s mother: ‘Don’t leave me with a f***ing screaming baby for hours.’

After fatally injuring Masie, Smith calmly lit a cigarette, drank a beer and played on his PlayStation at his two-bedroom flat in Edgware, northwest London, where he lived at the time.

His partner, who cannot be named for legal reasons, came home from her friend’s house and checked on Maisie but did not notice anything was wrong until a couple of hours later.

Maisie was rushed to hospital with dreadful injuries to her skull and spine leaving her handicapped for life.

Adoptive parents cared for her until she eventually died at home with them just before her 14th birthday on 28 June 2014. 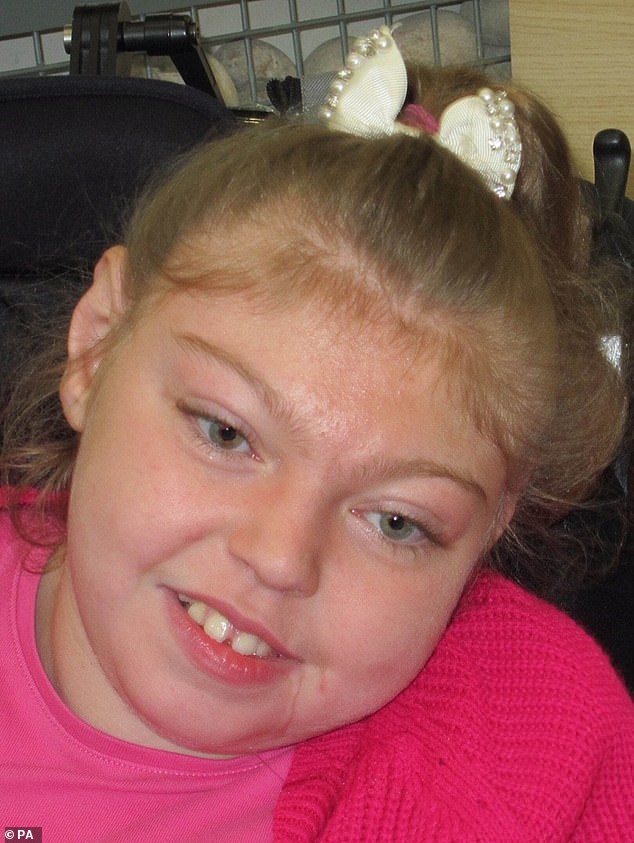 Maisie Newell was left with life-changing injuries and was cared for by adoptive parents until she died at home with them on June, 28, 2014

Smith admitted inflicting grievous bodily harm after the attack and was jailed for three years in 2001 before a murder investigation was launched following her death 13 years later.

He was cleared of murder following a retrial at the Old Bailey after admitting manslaughter. The first jury had failed to reach a verdict on the murder charge last September.

When recalling her relationship with Smith his partner told jurors heard how Smith once said: ‘Life’s a b****, you marry a b****, then have a couple of b****es, then you die.’

Sally O’Neill, prosecuting, said Smith had warned his partner he was difficult to live with.

‘Maisie Williams was four weeks old, her injuries were caused when he threw her across the bedroom into her wooden cot, where she hit her head.

‘His words to her as she left were ‘Don’t leave me with a f-king screaming baby for hours’. 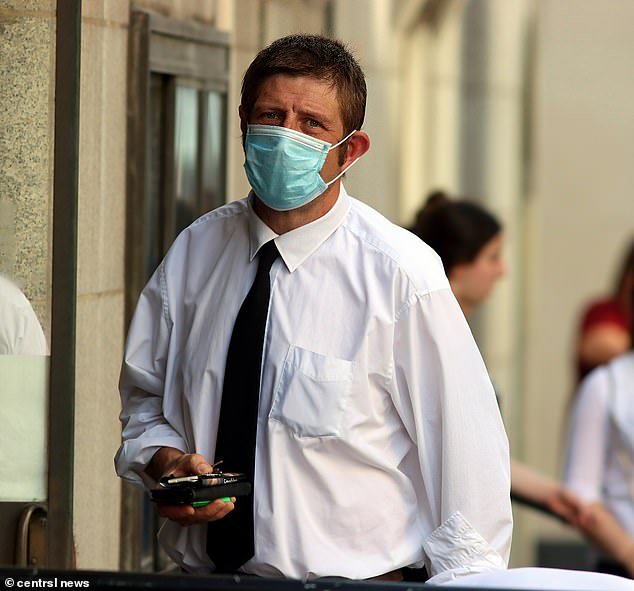 Smith had a ‘fit of temper’ when he couldn’t stop Maisie crying, the threw her into her wooden cot around four of five feet away standing in the bedroom doorway, the court heard.

He drank a beer and smoked a cigarette as she lay gravely injured until Maisie’s mother returned around an hour-and-half later at 4:30pm.

Ms O’Neill continued: ‘She had been gravely injured by what her father had done to her, but she survived, albeit with very serious and life-changing injuries.

‘There is no dispute her death was caused as a result of her injuries.

‘He said to police he had thrown her from her bedroom door into the cot and she headbutted the cot.

When police said that is quite a throw, he said: ‘Yes, what am I going to do. I lost my temper and I screwed up in a big way.’

‘He went to have a cigarette and calmed down. He didn’t say anything to her mother when she returned home.

‘He went along with her lie, he didn’t just stand there, he told close friends the same lie. He said he was disgusted with himself during his interview. It’s the prosecution’s case that he threw her in that way merely because he lost his temper.’ 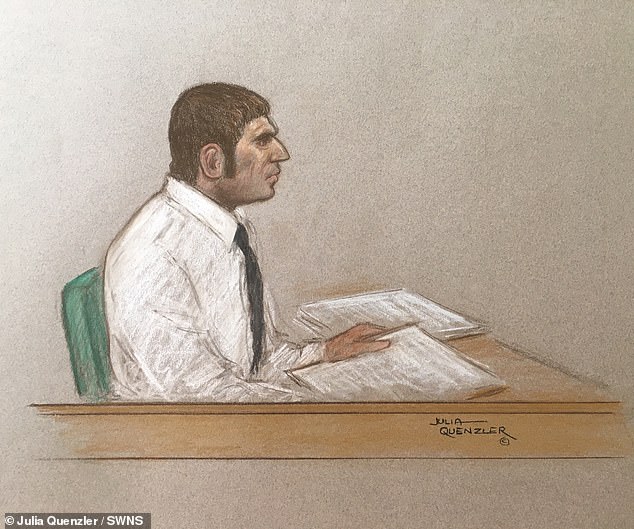 During a police interview, Smith admitted assaulting Maisie and said he was ‘disgusted with himself’. Pictured: Artist’s impression of Dean Smith appearing at the Old Bailey in 2020

Giving evidence Smith’s partner said: ‘Dean panicked. He was crying. I knew then that something was wrong.’

She desperately tried to revive the baby by ‘calling her name, gently rubbing her belly, and rocking her in my arms.’

‘He was just panicking, panicking, saying: ‘Nothing, nothing’ crying. I think at one point I said: “What have you done?”

‘I just kept asking him, ‘Why is she like this?’ I could not wake her up. I think she had a little, I cannot remember, a little mark to her head.’

Describing himself as ‘a low-life scumbag,’ the father claimed he had tried to kill himself while on remand for the assault in 2000 but that it had been a ‘half-hearted attempt.’

In his closing speech Zafar Ali, QC, defending Smith, told jurors: ‘He may have struck you as completely broken. You may almost feel his total despair.

‘He told you he hasn’t really been living the last 21 years, just going through the motions.

‘He just wants all this over and told you that in the witness box. He knows what he has done, he has killed his daughter.’

On May 31 2014, Maisie, who was adopted in 2002, was taken to hospital because of a breathing problem and bleeding.

Her condition deteriorated and she died on June 28 2014 at home at the age of 13, with her adoptive family by her side