HOME camera footage reveals the Miami Beach apartment collapsing in the early hours of Thursday morning – and it's since emerged that the roof was under construction for a month.

A Twitter user called Rosie Santana posted the shocking video after it emerged that the disaster killed at least one person, left dozens injured, and 99 people unaccounted for as of 4pm ET. 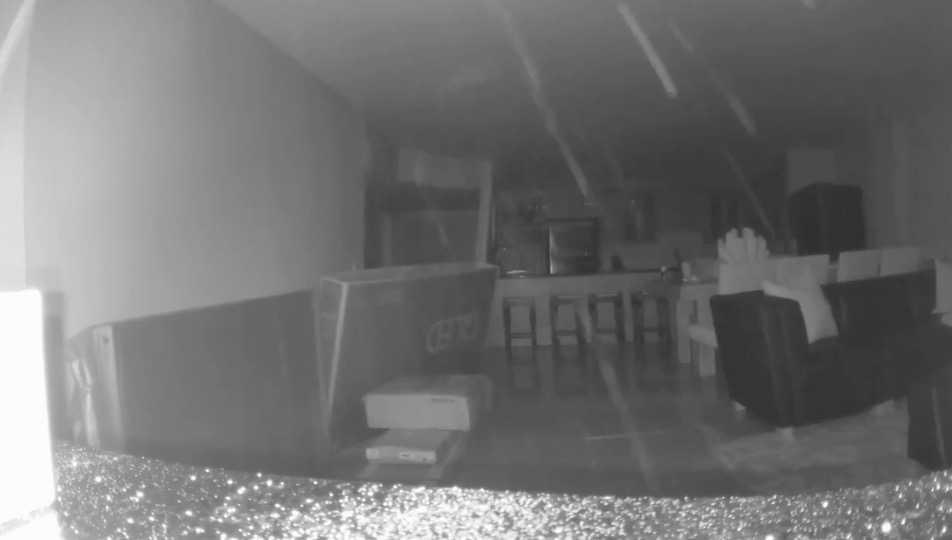 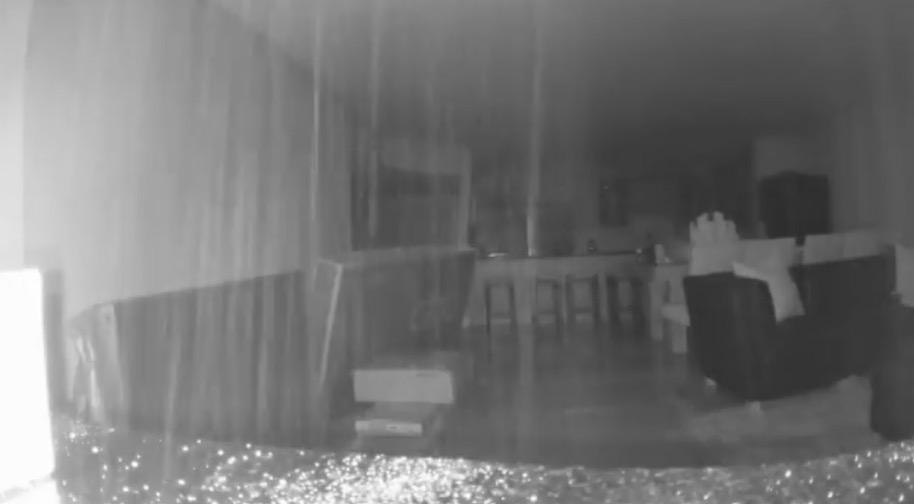 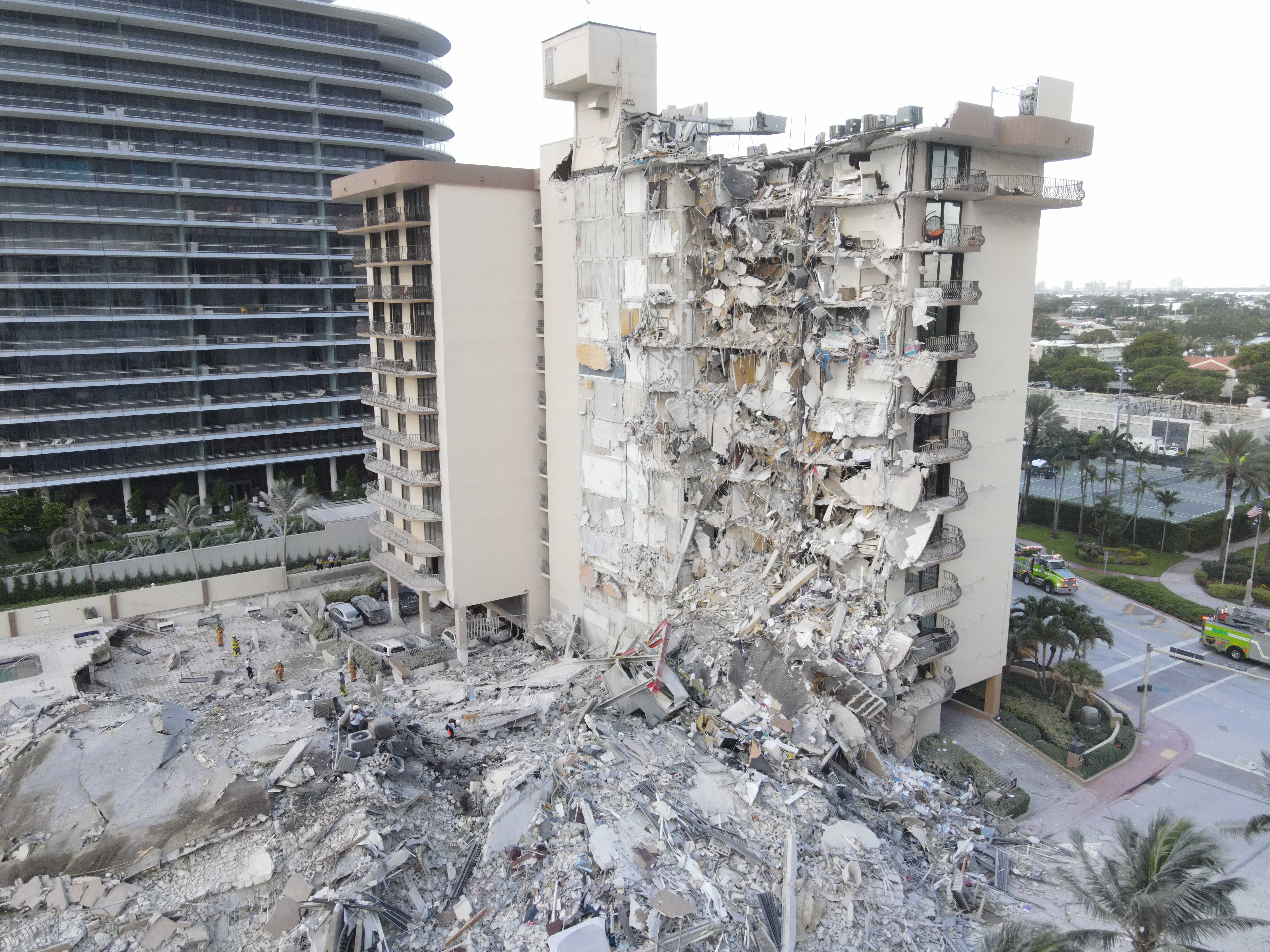 "I am a resident of one of the condos on the side of the collapse," Santana wrote at 3.56am ET.

"This is a video from my camera footage inside from the start of the collapse until the lose of connection (I was away from the building today). Towards the end, you hear the structure failing."

Debris can be seen falling from the ceiling during the 13-second clip before a disturbing groaning sound can be heard as the structure begins to cave in.

The footage then abruptly goes black.

The video comes as 35 people were pulled from the wreckage as 80 emergency crews and five state agencies responded to the incident in Surfside, which occurred at around 1.30am on Thursday.

Miami-Dade County Mayor Daniella Levine Cava said 102 people who have been accounted for at an afternoon press conference but 99 remain missing.

A licensed contractor in Florida who is familiar with the building told WNYT that “subterranean currents” or a “sinkhole” may have triggered the collapse, echoing comments from Surfside Mayor Charles Burkett.

The outlet reported this afternoon that the building was built in 1981 and it was undergoing roof work for about 30 days before the disaster struck in the early hours of Thursday morning.

Although work was being done on the building’s roof, Burkett said he did not see how that could have been the cause. 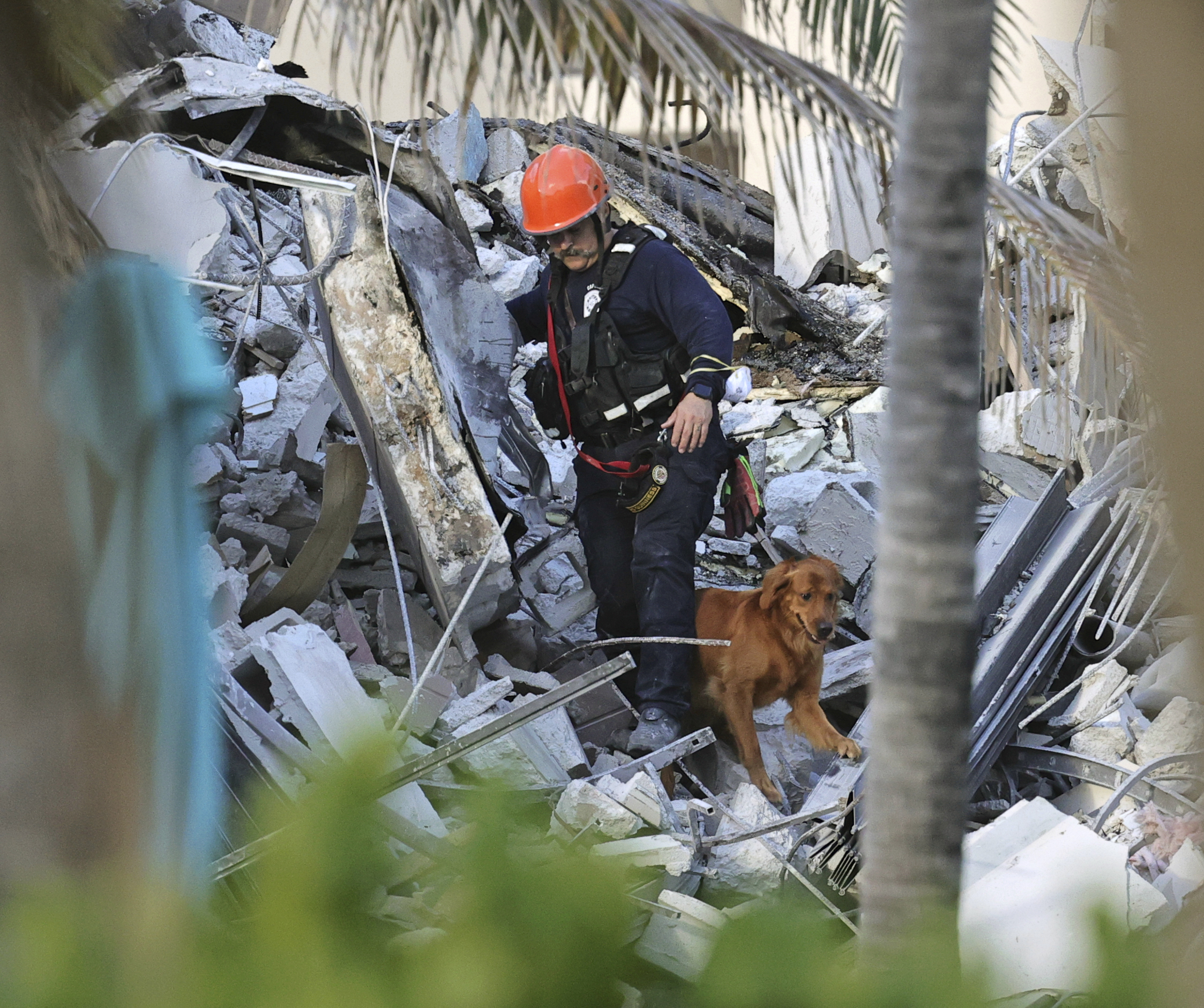 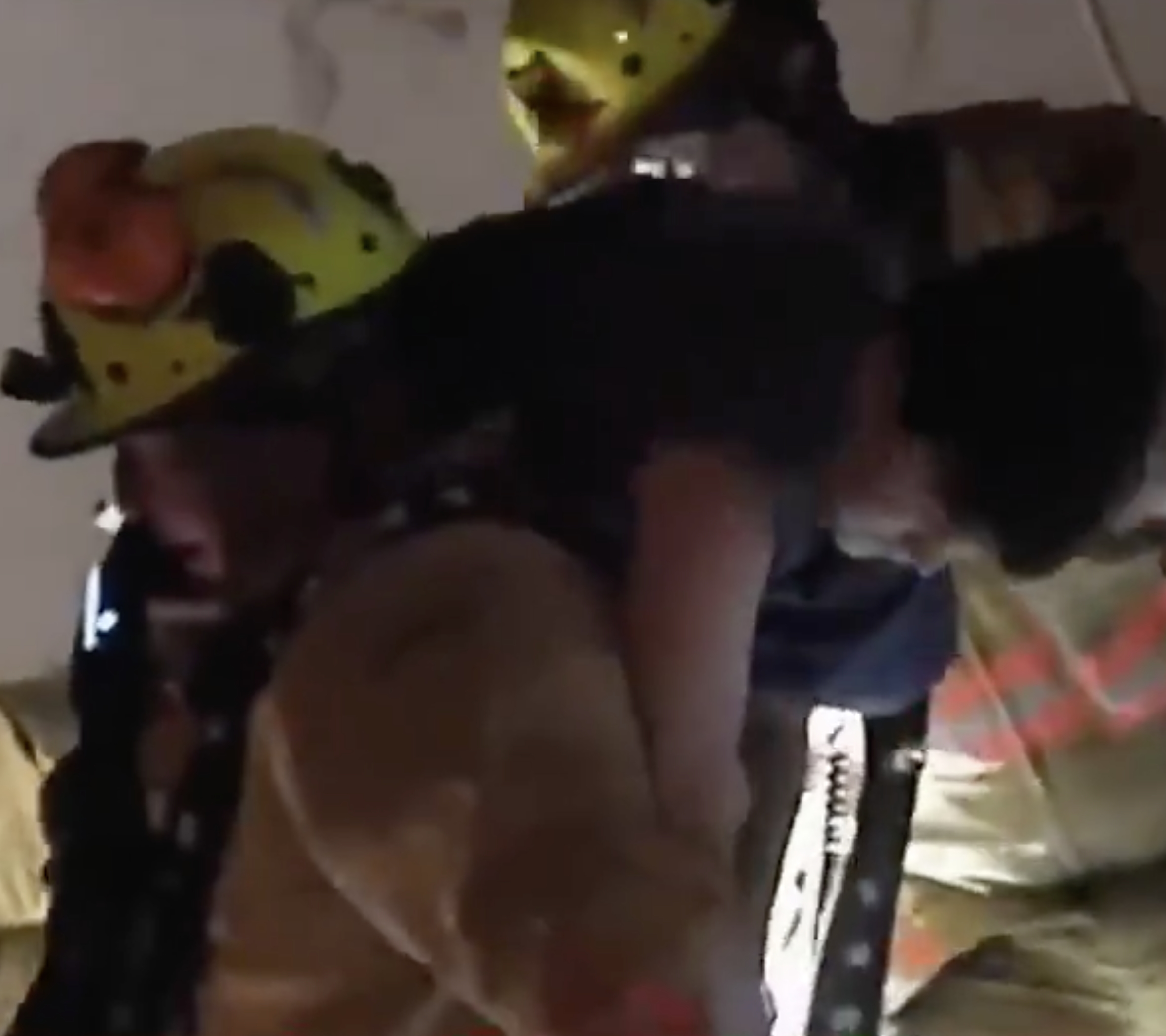 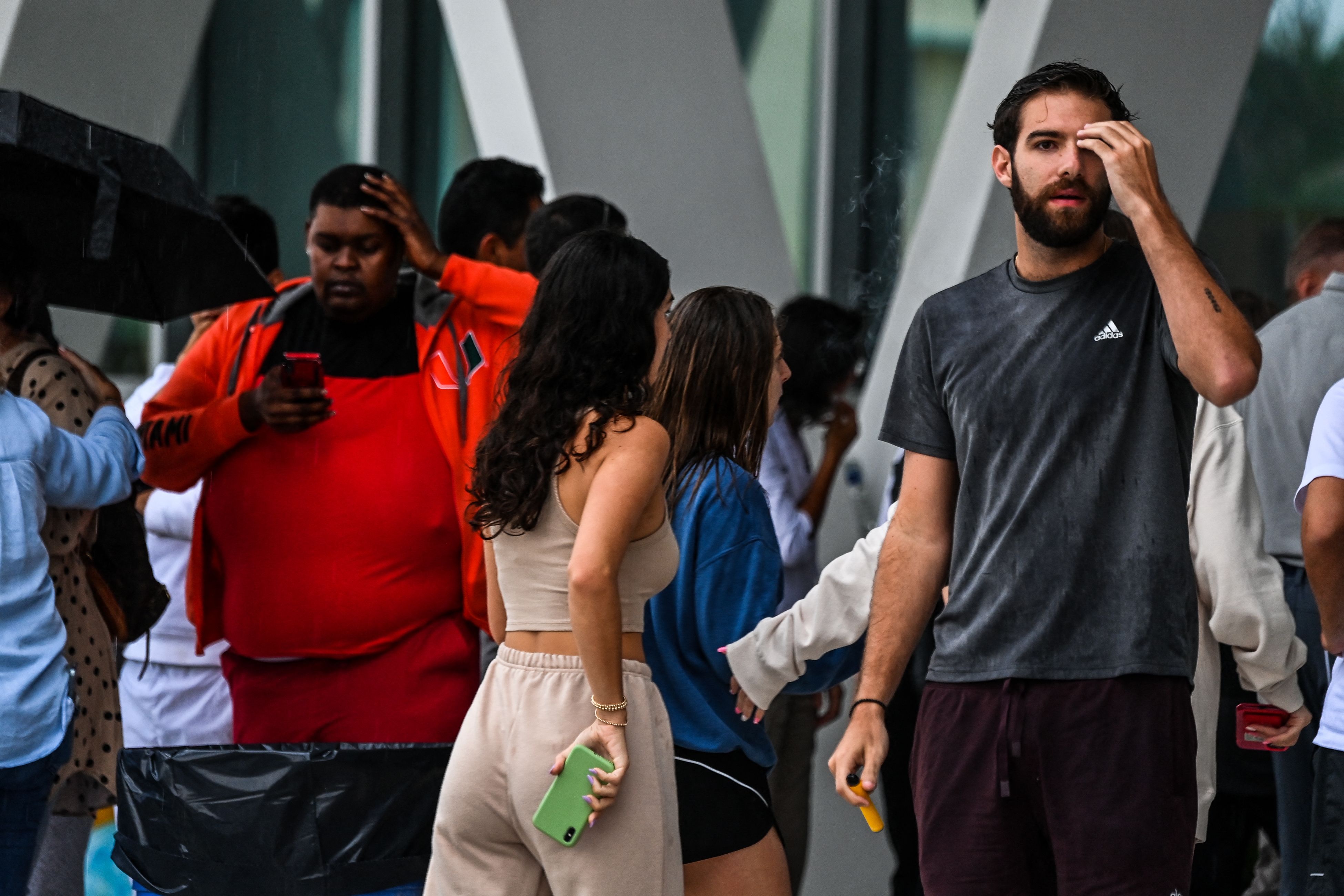 More footage shows a large section of the apartment building, called Champlain Towers South, that had collapsed into a pile of rubble near Collins Avenue on 88th Street, NBC Miami reported.

Officials confirmed that 55 apartments caved in, causing multiple injuries as 35 people were pulled from the wreckage, with 10 injured, and two hospitalized – one of whom passed away.

Local media reported that at least one person died and that a firefighter was among those injured, but others have noted that the death toll is expected to rise.

On Thursday afternoon, officials said 99 people were still unaccounted for following the accident after multiple apartments collapsed and authorities were still frantically searching the debris for survivors.

More harrowing video footage from the scene showed brave firefighters hoisting a 10-year-old boy to safety after they spotted his fingers "wriggling" through the wreckage. 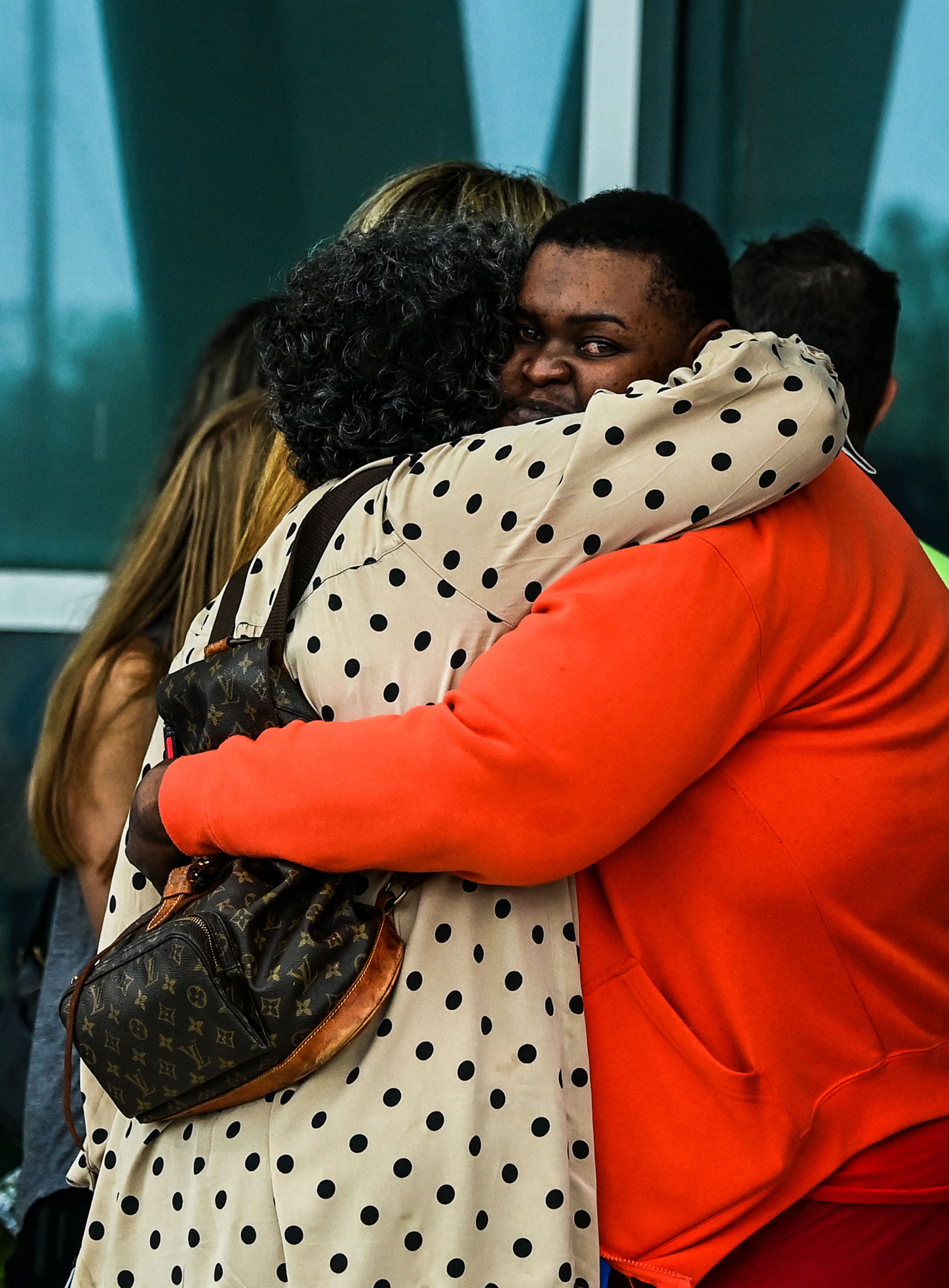 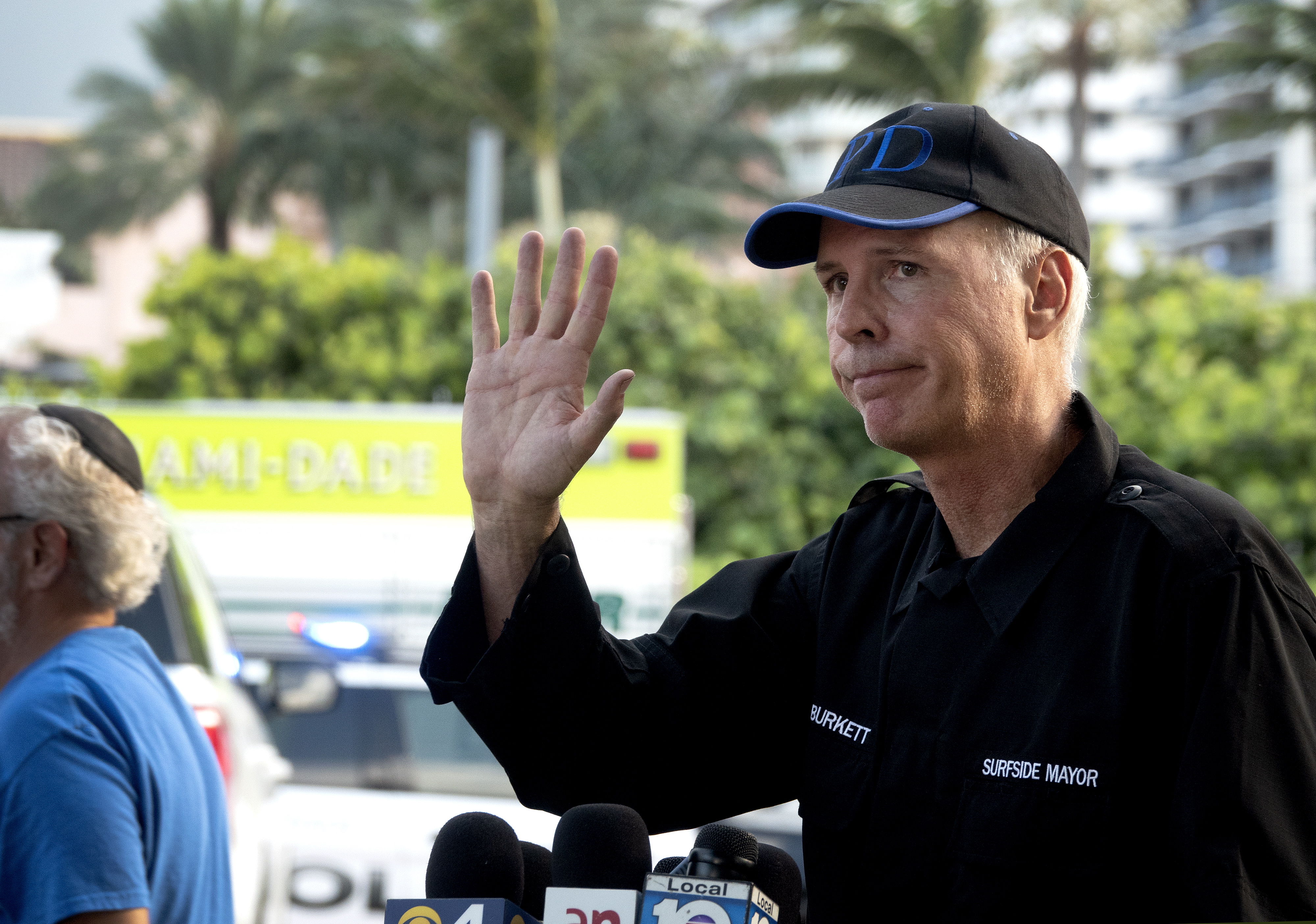 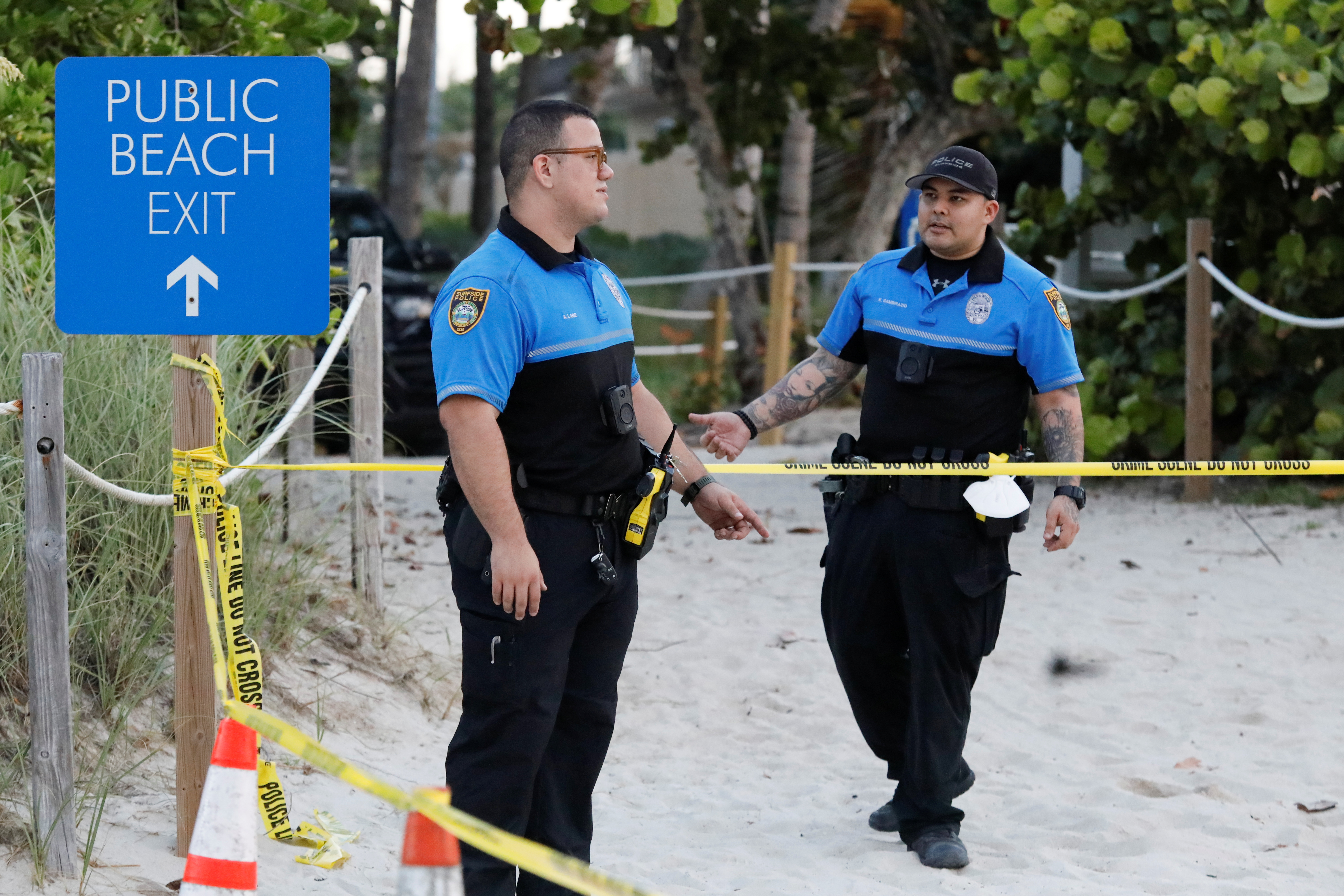 It's not known what caused part of the apartment block to fall to the ground and Florida Governor Ron DeSantis was briefed on the situation and confirmed there would be an investigation into the cause.

He said he hoped to identify "more survivors" as Kevin Guthrie of the Florida Division of Emergency Management confirmed that five agencies were "assisting local, county, and city government" in the rescue efforts.

Mayor of Miami-Dade County Daniella Cava and Surfside Mayor Charles W. Burkett also addressed reporters this afternoon as Burkett described waking up to "something like I could never believe."

Earlier, Burkett said "it looked like a bomb went off" as worried family members flock to the scene holding photos of missing family members on Thursday afternoon, reported WSVN.

He said: “The problem is the building has literally pancaked … It’s heartbreaking because it doesn’t mean, to me, that we’re going to be successful, as successful as we want to be, to find people alive. 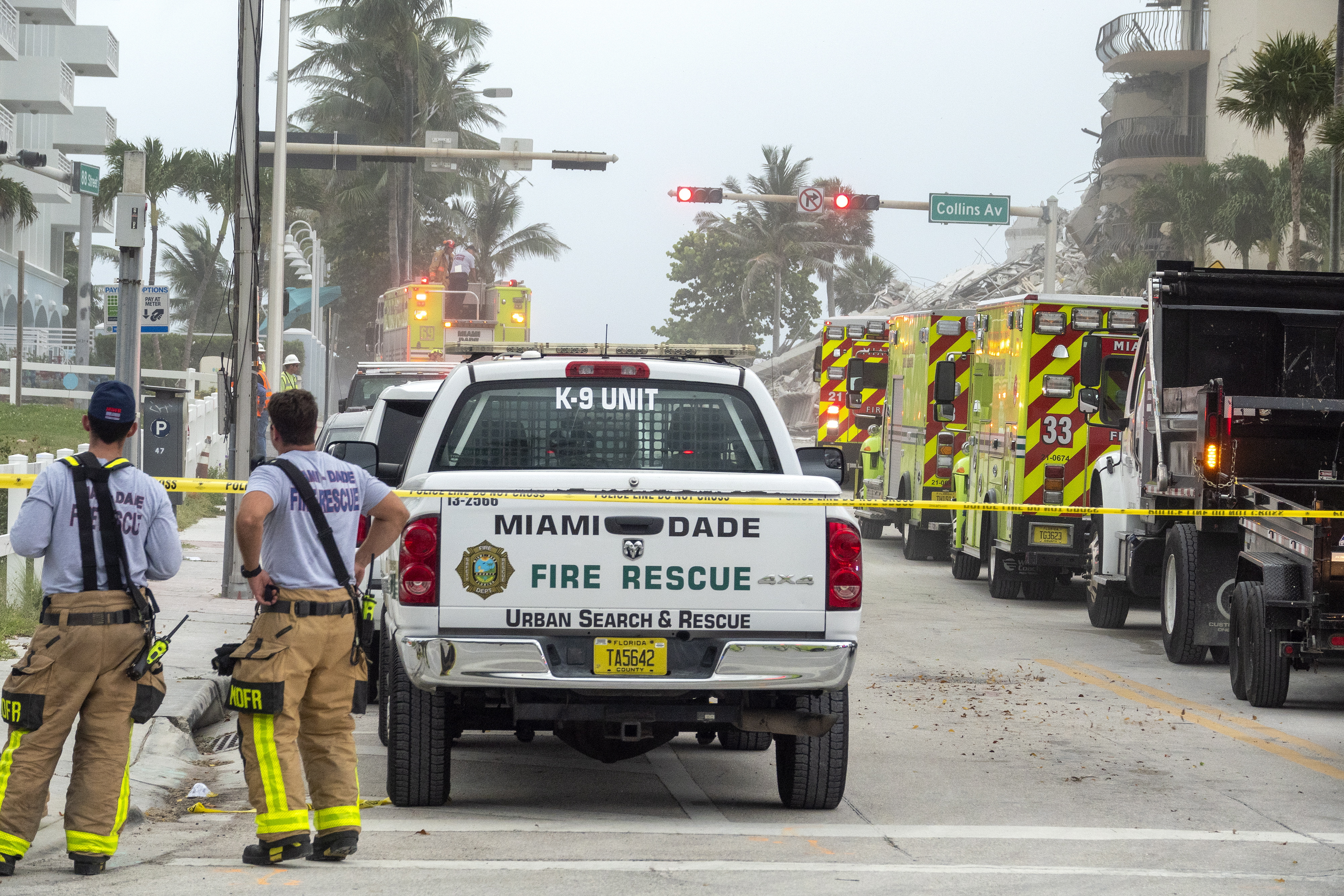 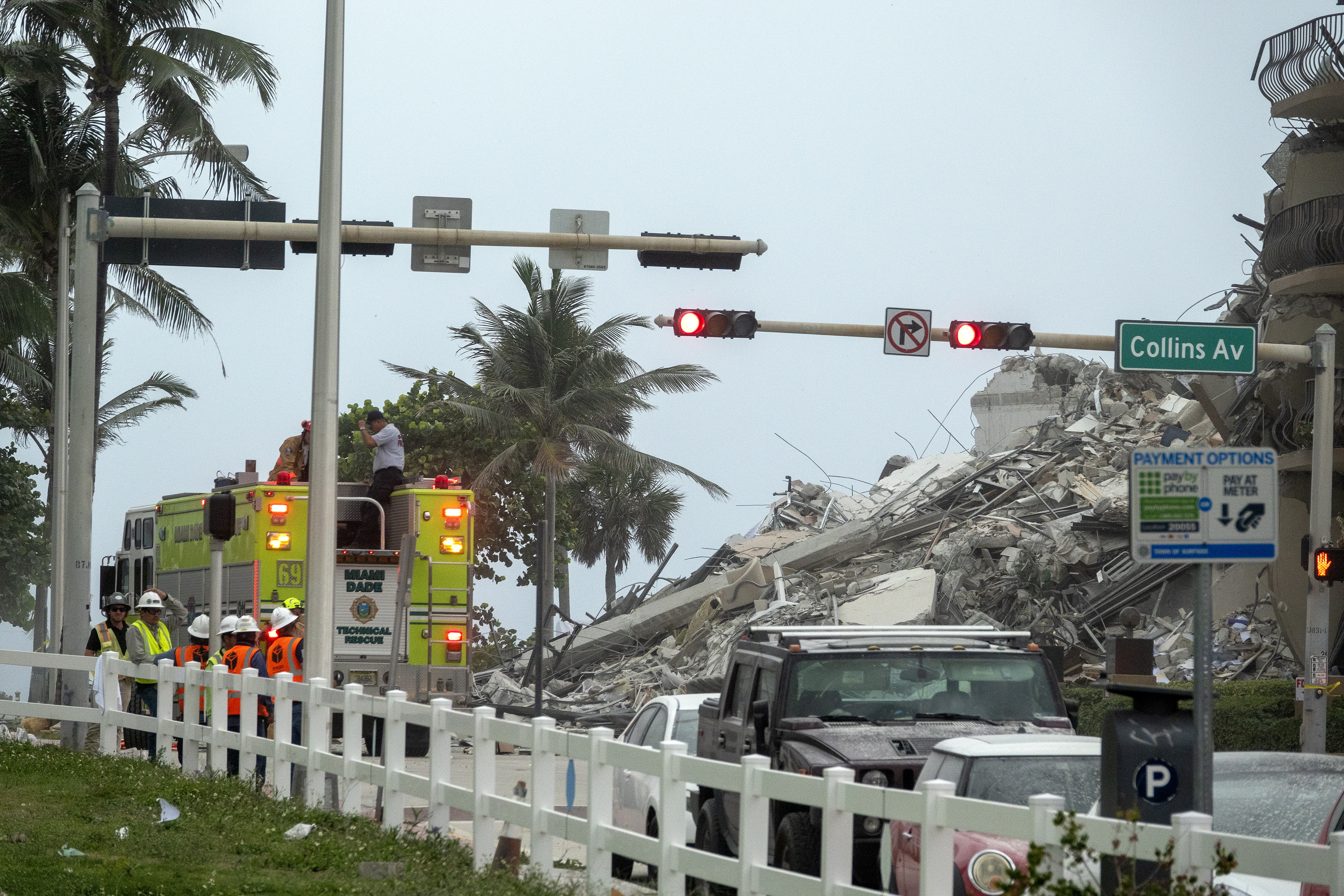 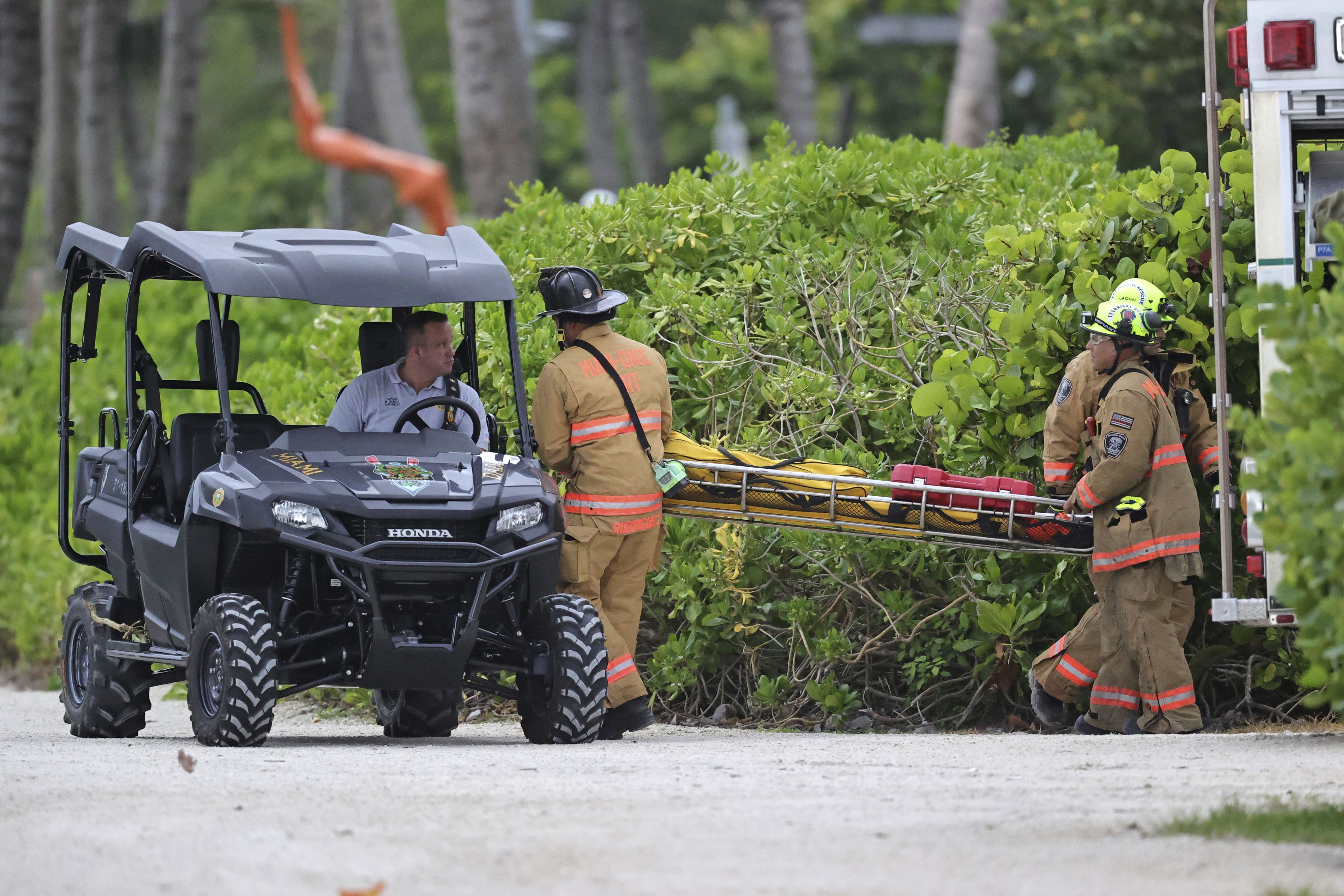 “There’s no reason for this building to go down like that unless someone literally pulls out the supports from underneath, or they get washed out or there’s a sinkhole …

“It’s less likely than a lightning strike. It just doesn’t happen. You don’t see buildings falling down in America, and here we had a building literally falling down.”

Emergency services were forced to set up a reunification center in the search for missing family members, while Miami-Dade Fire and Rescue (MDFR) said "the search and rescue efforts are ongoing" hours after the incident.

Despite the "inclement weather," the Incident Command "continued to coordinate operations of the search and rescue efforts at Champlain Towers" this afternoon, MDFR said.

DeSantis said that hotels and accommodation would be organized for displaced residents, which Cava said was in a "predominantly Jewish community."

The number of people in the building at the time of the collapse remains unclear as it accommodated temporary residents, as well as people permanently living there.

The search and rescue operation is ongoing on Thursday afternoon. 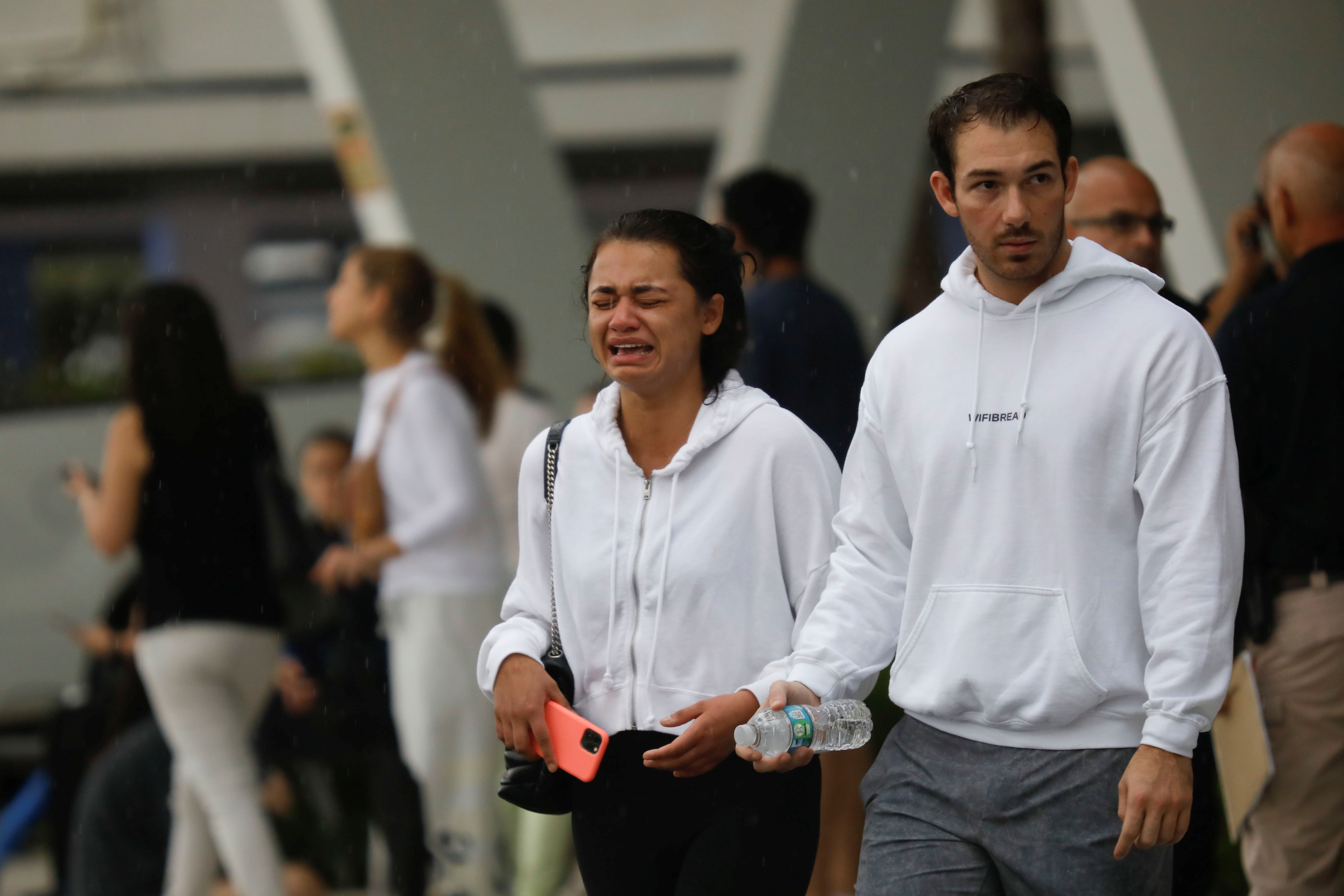 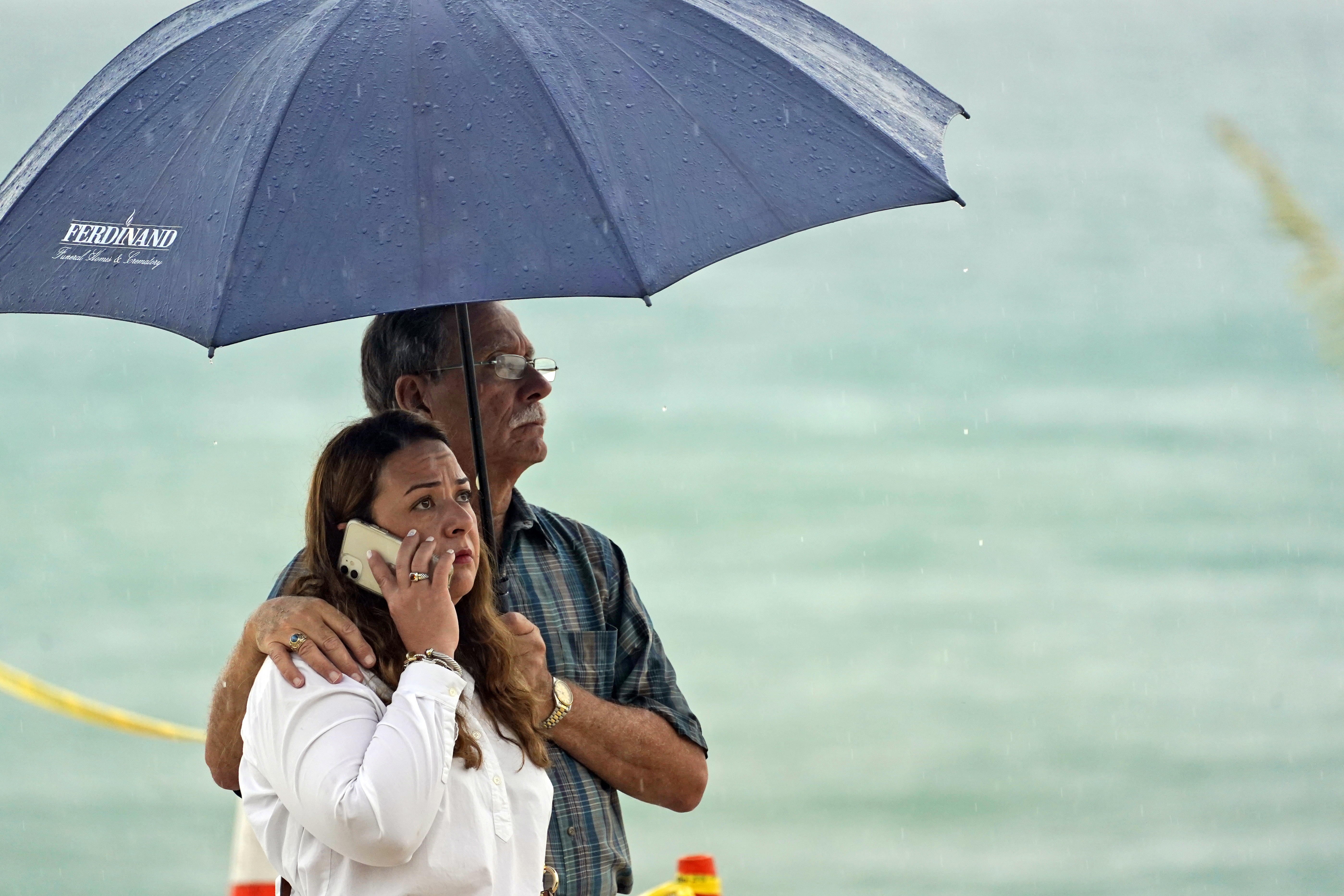