Los Angeles: After test pilot Chuck Yeager became the first man to break the sound barrier, he confessed to the highly un-Yeager-like emotion of fear.

"I was scared," he wrote in a memoir, "knowing that many of my colleagues thought I was doomed to be blasted to pieces by an invisible brick wall in the sky. But I noticed that the faster I got, the smoother the ride. Suddenly, the Mach needle began to fluctuate, then tipped right off the scale." 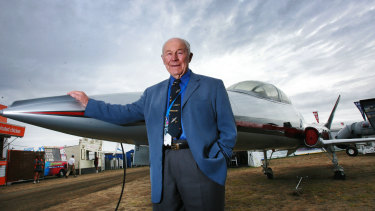 Chuck Yeager at the Australian International Airshow in 2007.Credit:Jason South

For 18 seconds on October 14, 1947, Yeager was supersonic — a feeling he later likened to "a poke through Jell-O." The achievement made Yeager an aeronautic legend — "the foremost in the Olympus", "the most righteous of all the possessors of the right stuff", according to author Tom Wolfe.

Yeager, who came to personify the cool-headed fly boy and whose wise-cracking West Virginia twang became a standard accessory for generations of pilots to come, died on Tuesday (AEDT). His death was announced via his official Twitter account, which cited his wife, Victoria. He was 97. 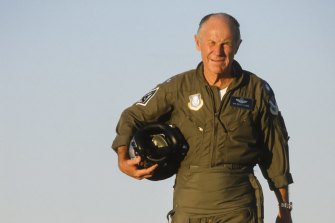 General Chuck Yeager poses for a portrait circa 1986 at Edwards Air Force Base near Edwards, California.Credit:David Madison

While Yeager went on to lead an Air Force training program for astronauts, his supersonic mission was "about being able to make an aircraft go faster and faster, particularly for combat reasons," Robert van der Linden, chairman of the aeronautics department at the Smithsonian's National Air and Space Museum, said in a 2013 Los Angeles Times interview.

When World War II fighter planes approached supersonic speed during dives, pilots often lost control because of "compressibility" a phenomenon that buffeted their craft with shock waves and rendered their controls terrifyingly useless. With his experimental Bell X-1 — the bright-orange, bullet-shaped "Glamorous Glennis" — Yeager helped solve those problems, paving the way for faster airplanes and supersonic military flights that have become routine. 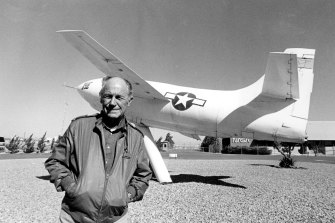 Chuck Yeager poses at Edwards Air Force Base, California, in 1985, in front of the rocket-powered Bell X-IE plane that he flew. Credit:AP

Famously unflappable, Yeager braved danger first in combat and then on the fringes of space, surviving a horrendous 1963 crash he later described in his autobiography Yeager, written with author Leo Janos.

As his aircraft plunged out of control over the Mojave Desert, Yeager was "spinning down like a record on a turntable," dropping from an altitude of about 32 kilometres to eight kilometres in minutes.

With characteristic understatement, he wrote in his 1985 memoir that he was "feeling kind of hopeless about this ride."

When he finally ejected, his seat became entangled in his parachute lines and smashed his faceplate. Red-hot debris ignited the oxygen flowing into his helmet and engulfed his head in flames. Severely burned, Yeager slammed onto the desert floor with his scorched parachute and was helped by a man in a pickup truck.

He "looked at me, then looked away," Yeager wrote. "My face was charred meat. I asked if I could borrow his penknife. I used the knife to cut away the glove. Part of two burned fingers came with it."

Yeager lost two fingertips and was hospitalised with other injuries for nearly a month, an ordeal he later described as "getting away cheap."

Yeager had an affinity for machinery but not much for the classroom. After graduating from high school in 1941, he enlisted in the Army Air Forces and was trained as a mechanic.

His first airplane ride was inauspicious.

"I took a spin with a maintenance officer," he recalled later. "I threw up all over the place."

Yeager lacked the college degree required for officer and pilot training, but, with the start of World War II, the army offered fighter-pilot training to enlisted men. With his remarkable eyesight and an intuitive grasp of aeronautical engineering, Yeager was accepted.

In 1944, he was flying combat missions from a base in England. Piloting a P-51 Mustang, he shot down his first enemy aircraft on March 4. The next day, Yeager himself was shot down over Bordeaux, in occupied France.

Despite leg and head wounds, he evaded German patrols, eventually joining up with the Maquis, a French Resistance group. After an arduous trek over the snowy Pyrenees – and a run-in with a German patrol that left his companion severely wounded – Yeager escaped into Spain and eventually made it back to England.

Because of the possibility that they might be shot down again and tortured into revealing secrets about the Resistance, pilots who escaped from France were not supposed to return to combat. But Yeager wanted back in and pleaded his case to every officer he could find, including the Supreme Allied Commander, General Dwight Eisenhower.

Eisenhower, impressed with someone who turned down a chance to go home, gave Yeager his wish. By VE-Day, he had taken part in downing 13 enemy planes — one of the highest totals in the war. On one day alone, he was responsible for knocking five German Messerschmitt-109 fighters out of the skies over Bremen.

Returning home in 1945, he married Glennis Faye Dickhouse, whom he had met a few years earlier when she was 18 and organising USO dances in Oroville, California. Even before their marriage, he dubbed his planes one variant or another of "Glamorous Glennis."

Because of his native skills in the cockpit, the Army overlooked Yeager's lack of engineering credentials and selected him to test fighter planes, mostly at Muroc Dry Lake, a desolate, dust-blown desert base north of Lancaster. 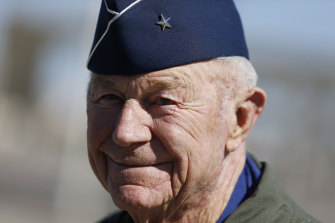 Charles Yeager talks to members of the media in 2012 following a re-enactment flight commemorating his breaking of the sound barrier 65 years earlier.Credit:AP

"Even though he lacked a college education, that didn't make a lick of difference," said the Smithsonian's van der Linden, who, with his Smithsonian colleague Dom Pisano, wrote a 2006 history, Chuck Yeager and the Bell X-1: Breaking the Sound Barrier.

"Yeager had an innate understanding of all things mechanical, and engineers on the ground really liked that," van der Linden said. "They understood him and he understood them. They spoke the same language."

In 1947, Yeager was chosen to pilot the rocket-powered Bell X-1 airplane in an effort to break the sound barrier. 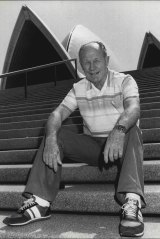 Others had tried it before. British pilot Geoffrey de Havilland jnr died in 1946 when his experimental plane disintegrated at Mach .94. Mach, the speed of sound, varies with atmospheric conditions and altitude. It is roughly 761 mph at sea level.

Early tests with the X-1 at Muroc were not encouraging. Carried aloft by a B-29 bomber and set loose to fly an arcing path into the stratosphere, the aircraft would begin shaking "like a car with bad shock absorbers" as it approached Mach 1, Yeager reported.

But the tests continued, achieving ever-faster speeds. On October 12, 1947, after a flight that pushed the top speed to Mach .96, test engineers decided to try for Mach .97 two days later.

Before the attempt, Yeager was supposed to rest.

In those days, Florence Lowe, a onetime San Marino socialite who had become a desert rat and changed her named to Pancho Barnes, was running a bar, restaurant and motel near Muroc called the Fly Inn.

A hangout for young test pilots, it drew Yeager and Glennis on the evening of October 12.

"Yeager didn't go to Pancho's and knock back a few because the big test was coming up," Wolfe wrote. "No, he knocked back a few because, in keeping with the military tradition of flying and drinking, that was what you did if you were a pilot at Muroc and the sun went down."

Riding on horseback with Glennis in the dark, Yeager crashed into a gate and broke two ribs. In pain, he had himself taped up by a veterinarian friend, who pledged to keep the mishap secret.

Two days later, Yeager was strapped inside the X-1. Because of the rib fractures, his movement was limited but he managed to close the cockpit hatch with a chunk of broomstick an engineer friend had sawed off for that purpose.

In a few minutes, the 31-foot-long X-1 was dropped from the bomber and Yeager fired up its rocket engines, ushering in a new era in flight. Yeager hit Mach 1.07, or about 700 mph.

With Cold War secrecy, the Air Force, which had only recently been created, would not confirm reports of Yeager's feat for eight months. Fame would come later, peaking with the 1983 film version of Wolfe's 1979 book, The Right Stuff. Actor Sam Shepard portrayed Yeager, and Yeager himself played Fred, a bartender at Pancho's saloon. 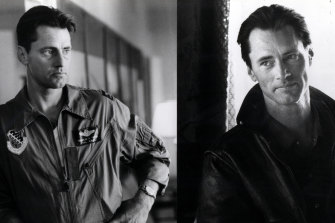 Sam Shepard as Chuck Yeager in the movie The Right Stuff.Credit:Ladd Company/File

Flights of new and experimental aircraft continued at the Muroc facility — renamed Edwards Air Force Base in 1949. Yeager's renown grew, his honours piled up, and the promotions, finally to brigadier general, kept coming.

Along the way, he lost command of a fighter squadron after his pilots trashed a bar in Aviano, Italy, in 1959. His career regained momentum when he ran the Aerospace Research Pilots School at Edwards, training the first of the astronauts. He later directed a fighter wing in Vietnam.

After that, he hunted and fished and did TV commercials, most notably for AC Delco batteries.

He also did a little more flying, a few times at speeds exceeding his 1947 record. In 2012, on the 65th anniversary of his breakout performance, he was again in a plane that shattered the sound barrier, flying to Mach 1.4 with a pilot from Nellis Air Force Base in Nevada. Yeager was 89 at the time.

From time to time, claims surface of other pilots breaking the sound barrier before Yeager. None of the claims was ever verified, van der Linden said.

In 1990, Glennis died. Thirteen years later, he married Victoria Scott D'Angelo, a former actress 36 years his junior. They met on a hiking trail near his home in Penn Valley, a small town in California's Gold Country.

The marriage embittered Yeager's four grown children, who in litigation cast D'Angelo as a gold-digger. Yeager filed actions of his own, contending he had the right to manage his own legal and financial affairs and that his daughter Susan, who co-managed a family trust with him, had overstepped her authority by selling property without his consent.

In 2008, the California Court of Appeal sided with Yeager.