Skip to content
HomeWorld NewsIndia deploys another 50,000 troops to its disputed border with China

India deploys another 50,000 troops to its disputed border with China – as tensions between the nuclear-armed sides remain high after deadly mountain battle

India has deployed another 50,000 troops on its disputed Himalayan border with China – a significant display of power to its nuclear rival.

The two sides clashed in a high-mountain battle last year that left more than 20 soldiers dead in the bloodiest days since the Sino-Indian War of 1962.

Over the last three months, India has dispatched soldiers and fighter jets to the border, bringing its total up to 200,000 troops, an increase of 40 per cent on last year, sources told Bloomberg.

It is not clear what numbers China has but it has bolstered its infrastructure across the tundra with runways, bomb-proof bunkers for fighter jets, howitzers and outposts. 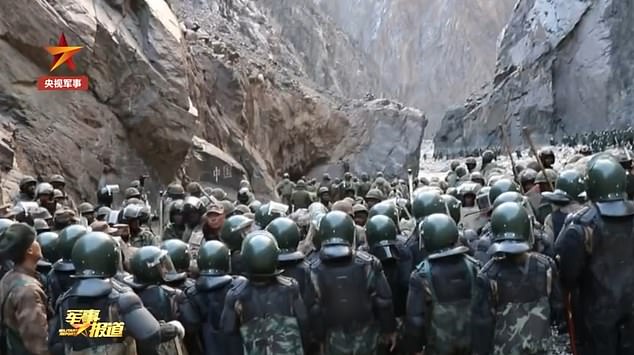 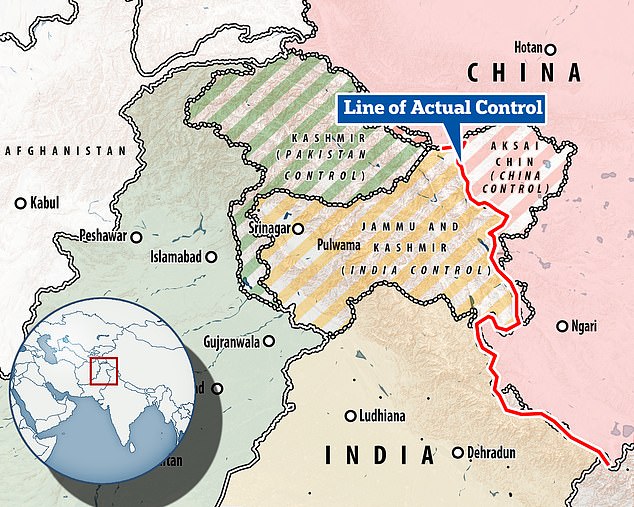 The fiercely contested Line of Actual Control stretches from Ladakh in the west to India’s eastern state of Arunachal Pradesh, which China claims in its entirety. It is broken in parts where the Himalayan nations of Nepal and Bhutan sit between India and China. According to India, the de facto border is 2,167 miles long, while China says it is considerably shorter.

The northernmost Ladakh region has seen the largest increase in troop levels from both sides. It was the area where Indian and Chinese soldiers took up arms against each other several times last year.

Indian Defence Minister Rajnath Singh took his first visit to the region last week since February, when he had personally overseen the de-escalation in tensions following the battle on the banks of Pangong Tso, a glacial lake 14,000 ft above sea level.

In addition to Ladakh, India has sent more men to its other borders with China, including along the southern Tibetan plateau, between Nepal and Bhutan.

In that more populous region, regular soldiers armed with machine guns have been recruited to support paramilitary officers.

While in the far eastern state of Arunachal Pradesh, where historically the bulk of India’s forces have been deployed, new French-made Rafale fighters are helping to provide more of a deterrent.

Prime Minister Narendra Modi, though with less money to spend on defence due to the pandemic, realises that China poses the biggest strategic threat.

He has, therefore, moved soldiers away from Pakistan, providing security through diplomacy, so that he can put more troops on the Chinese frontier.

The standoff last year began in early May in the Karakoram mountains, when Indian and Chinese soldiers ignored each other’s repeated verbal warnings not to send out patrols into each other’s territory.

It triggered shouting matches, stone-throwing and fistfights on the northern bank of Pangong Lake, which is marked by eight contested ridges where rivers flow into the waterbody. 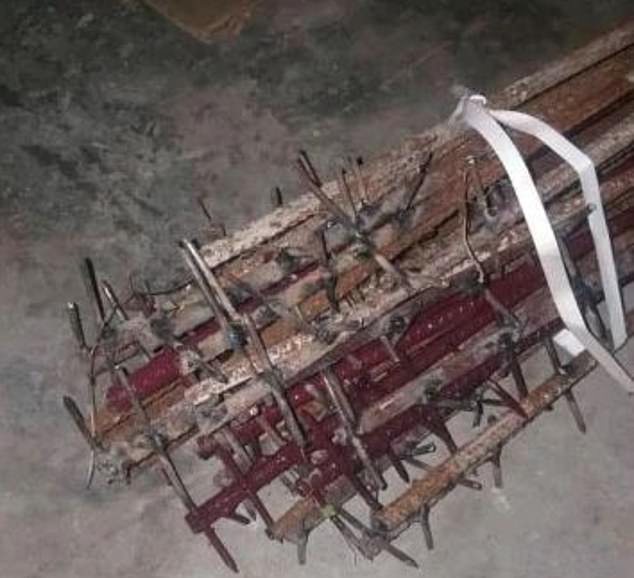 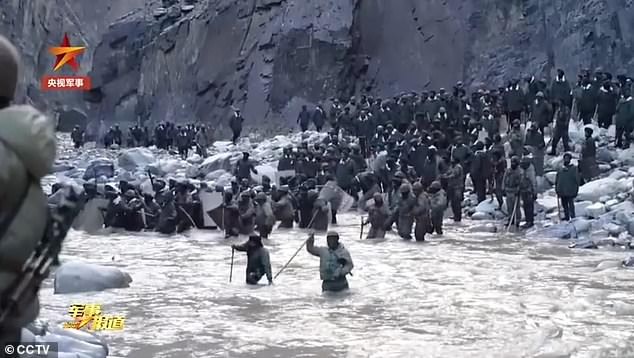 The battle took place after ‘the foreign military openly violated the consensus reached with us and blatantly crossed the line to provoke [us],’ according to the military channel of CCTV 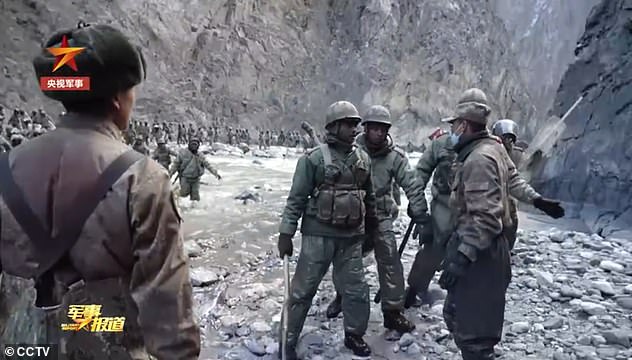 By June, frictions escalated and spread north in Depsang and Galwan Valley, where India has built an all-weather military road along the disputed frontier.

The Galwan Valley clash was the most fierce of all as hundreds of men fought with nail-studded clubs, riot shields and rocks, leaving at least 20 Indian soldiers dead, while the Chinese claimed just four of their men were killed.

Each side accused the other of instigating the violence, which has dramatically changed the India-China relationship.

Commanders held a summit in March of this year that saw a withdrawal from the Galwan Valley and Pangong Lake. 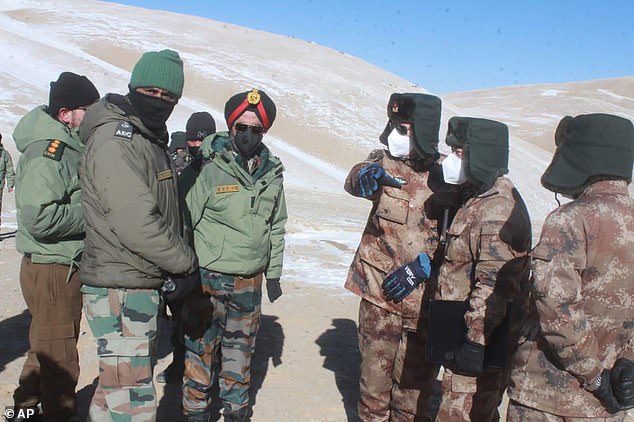 In this photograph provided by the Indian Army, army officers of India and China hold a meeting at Pangong lake region in Ladakh on the India-China border on February 10 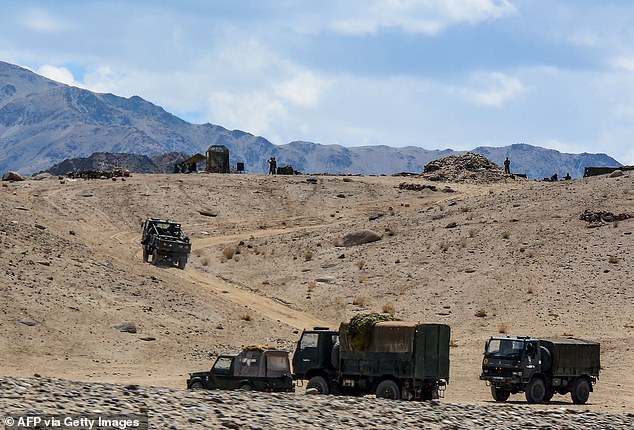 In this file photo taken on July 4, 2020, Indian soldiers drive vehicles along mountainous roads as they take part in a military exercise at Thikse in Leh district of the union territory of Ladakh

But standoffs remained in Depsang and at least two other places, Gogra and Hot Springs.

The two sides fought a border war in 1962 that spilled into Ladakh and ended in an uneasy truce. Since then, troops have guarded the undefined border while occasionally brawling.

The fiercely contested Line of Actual Control stretches from Ladakh in the west to India’s eastern state of Arunachal Pradesh, which China claims in its entirety. It is broken in parts where the Himalayan nations of Nepal and Bhutan sit between India and China.

According to India, the de facto border is 2,167 miles long, while China says it is considerably shorter. As its name suggests, the Line of Actual Control divides the areas of physical control rather than territorial claims.

The Himalayan border between India and China has been disputed for centuries, but the two countries have been fighting over it most recently since the 1960s.

In the 18th century it was fought over by the Russian, Chinese and British empires, and after India gained independence ownership of the region became more confused.

China values the region because it provides a trading route to Pakistan, and recent hostilities have been sparked by fears in Beijing that India will cut it off from the crucial overland corridor.

The current official border between the two was set by Britain and is known as the McMahon line. It is recognised by India but not by China.

In reality, the border between the two countries is on Line of Actual Control (LAC) where Indian and Chinese forces finished after the Sino-Indian War of 1962.

Aksai Chin, the site of the latest tensions, is located in India according to the official border but is claimed as part of the Chinese region of Xinjiang by Beijing.

It is an almost uninhabited high-altitude scrubland traversed by the Xinjiang-Tibet Highway.

The other disputed territory is hundreds of miles away to the east of Tibet.

The 1962 Sino-Indian War was fought on these two frontiers as Indian Prime Minister Jawaharlal Nehru put it, a struggle over land where ‘not even a blade of grass grows.’

In addition to the disputed border, China had seized Tibet ten years before and accused India of trying to to subvert Beijing’s interests by granting asylum to the Dalai Lama.

There was also a Cold War element and India wanted to see if the US would back it in a confrontation against communist China.

Delhi had ignored the desolate corner of the subcontinent which allowed the Chinese to build a military road through it during the 1950s to connect the province of Xinjiang to Tibet.

The Indian discovery of this highway was a major factor which led to ferocious clashes leading up to the war.

Yet the Indians had just two divisions posted at the border when the Chinese invaded, never suspecting that Beijing would be so bold as to cross the McMahon Line.

The war lasted for one month and left more than 2,000 dead on both sides. It was a heavy defeat for India and led to the new border, the LAC, being established and pushing India back from McMahon line.

Much of the reason for the ongoing conflict is the ill-defined border, the result of a confused status the region had during the colonial era, which was made more murky by India’s war with Pakistan in 1947.

Beijing fears that increased Indian presence in the region will cut off its trade route to Pakistan.

The two sides have blamed each other for recent hostilities but analysts say India’s building of new roads in the region may have been the fuse for May’s standoff.

Both sides have dispatched reinforcements and heavy equipment to the zone.