On any typical day, hundreds of people will up to visit the Shrine of Fatima Masumeh at Qom, one of Iran’s holiest monuments. Some will stay for hours or days praying at the mosque, gathering in the three large prayer halls or in the courtyards around the burial chamber. Like the millions of pilgrims before them, they will kiss the doors, the windows and the walls of the shrine, many of them desperately sick hoping for a miracle that will cure them.

Now that the holy city of Qom has emerged as the likely epicentre of the coronavirus in Iran, how many of the pilgrims that visited last week, you have to wonder, have been infected, and how many more will die because of the authorities’ refusal to close the city and its much-visited religious shrines, like Masumeh. 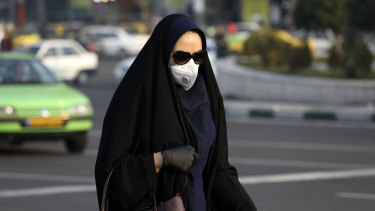 Iran has quickly become one of the main virus centres outside of China.Credit:AP

Although Iran only reported its first two cases of COVID-19 on February 19, any chance that might have kept the epidemic from spiralling out of control has already been lost. As of February 28, Iran's state-run IRNA news agency's figures show 388 confirmed cases and 34 deaths, but this is the tip of the iceberg. With the mortality rate of the coronavirus in China currently at around 2 per cent, and with each person with the coronavirus, on average, infecting two to three other people, this suggests hundreds of thousands are already infected. Qom should have been shut weeks ago, yet only on February 28 did the authorities finally agree to restrict visitors to the shrines, and cancelled prayers in Iran’s major cities.

The uncontrolled spread of the epidemic that was probably brought to Qom by Chinese workers and students can be attributed to the collective failure of Iran’s government, clerics and local authorities to take effective measures to address the virus when it first become known. There’s so much to be frustrated with, not least because there’s evidence the virus has been in Iran since early January. Instead of warning of the developing situation, the authorities appear to have delayed the announcement until the end of the 40th anniversary celebrations of the Islamic Revolution.

What is most worrying is that their negligence may also lead to an even greater global viral outbreak. On Sunday, a man returning from Iran has become the fifth case of COVID-19 reported in NSW. On Saturday, on the Gold Coast, a 63-year-old female beautician who had also returned from Iran became the sixth person in Queensland diagnosed with COVID-19. We also know that Shia Muslim pilgrims who travelled to Qom make up the majority of cases that have been found in Pakistan, Kuwait, Bahrain, Oman, Iraq and Lebanon, as well in multiple cities across Iran.

On Wednesday, the authorities were still insisting that the religious shrines – described as "houses for cure" – remained open, with thousands of people passing in and out every day. "House for cure means people would come here to get cured from mental and physical diseases," Ayatollah Mohammed Saeedi said. "Therefore, it should be open, and people should be encouraged to come here."

The low figures that Iran has reported, however, are not simply a case of wilful miscalculation. Iran simply does not have enough testing kits to calculate the scale of the problem and it also lacks the medical equipment it needs to contain the outbreak. Very few medical staff have access to proper protective gear, and there is a chronic shortage of masks and disinfectants in pharmacies. I have spoken to people who believe they may have coronavirus but have arrived in hospital only to find there’s no way of being tested. All they could do was return home, to where their families live.

Coupled with this, part of the regime’s pattern of downplaying the severity of the crisis stems from their belief that this virus has been inflicted on them by the West. Hojjat ol-Eslam Seyyed Mohammad Saeedi, the Friday Prayer Imam and Custodian of the Shrine of Masoumeh, blamed President Trump for targeting the city with the virus to "instil fear in people’s hearts and make Qom look like an unsafe city". It’s a typical response. The United States is an easy target for the regime to shift the blame. The regime wants to appear strong against the enemy.

At Iran International, a Persian-language TV station based in London, we have been transmitting regular updates into Iran via social media. But people don’t know what to think. Anyone expressing distrust in the official figures are being rounded up by the police and accused of spreading rumours about the virus. Online posts that Iran’s cyber force says "contain rumours or fake news meant to disturb the public and increase concern in society" are being blocked.

This weekend, a World Health Organisation team were to travel to Iran to evaluate the situation and provide support. Although the WHO has been organising the supply of masks, we can assume the medical shortages facing Iran will only worsen in light of US sanctions.

On Tuesday, US Secretary of State Mike Pompeo said he believed Iran may have concealed "vital details" about the virus and urged all nations to "tell the truth" about the virus. This is true, but international concern over Iran has highlighted a much wider issue – the vulnerability of some countries to deal with major outbreaks of disease. How can global efforts to contain this virus – and perhaps future ones, far more deadly – be truly effective while such weaknesses in the chain exist.

There have been endless missed opportunities to prevent the spread of the virus in Iran. Qom and Iran’s other cities needs to be fully quarantined. Only constant international pressure will change this. Sadly, for many of Iran’s victims, there are no second chances.

Dr Homayoun Kheyri is an Iranian-Australian cell biologist and is currently science editor for Iran International, a Persian-language television station based in London.