Eco-zealots in Italy have blocked the busiest motorway in Rome as climate protests begin to sweep across Europe.

Protesters have sat in the middle of the Via Guglielmo Marcon in the country’s capital holding banners aloft as part of Ultima Generazione, Italian for Last Generation, demonstrations.

The ‘civil disobedience’ movement was borne from Extinction Rebellion and the independent ‘Ultima Generazioneâ’ last year.

The protesters are demanding that disused coal plants be reopened and calling for a halt to a new drilling project for the research into and extraction of natural gas.

It was the latest such stunt by climate campaigners in a spate of high-profile incidents in which eco-warriors have targeted road networks and artworks across Europe.

Eco demonstrations, which have taken place in London every day this month, include two environmental activists who glued themselves to an exhibition of a dinosaur skeleton at Berlin’s Natural History Museum yesterday to protest against the German government’s climate policies. 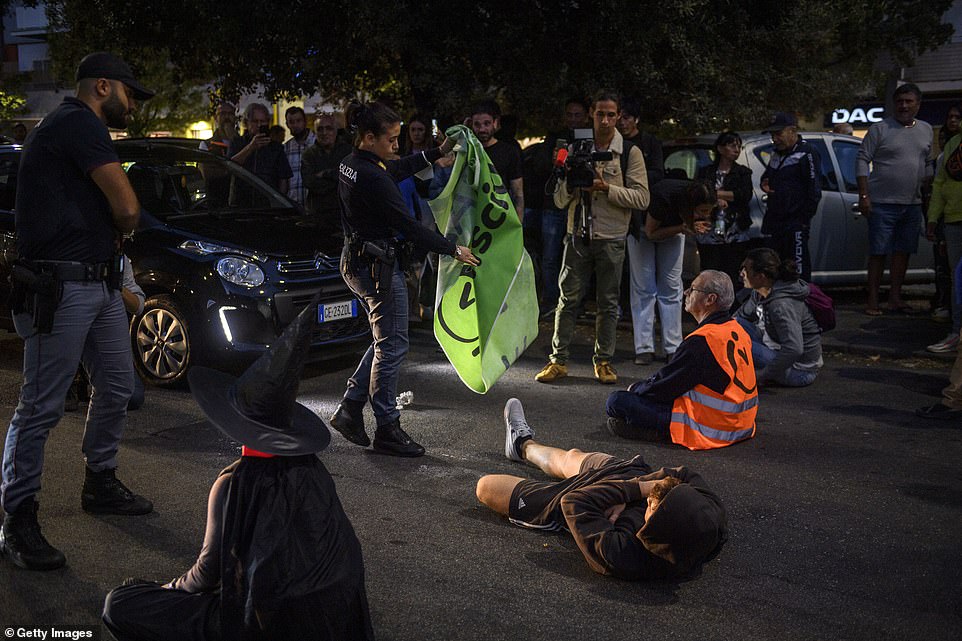 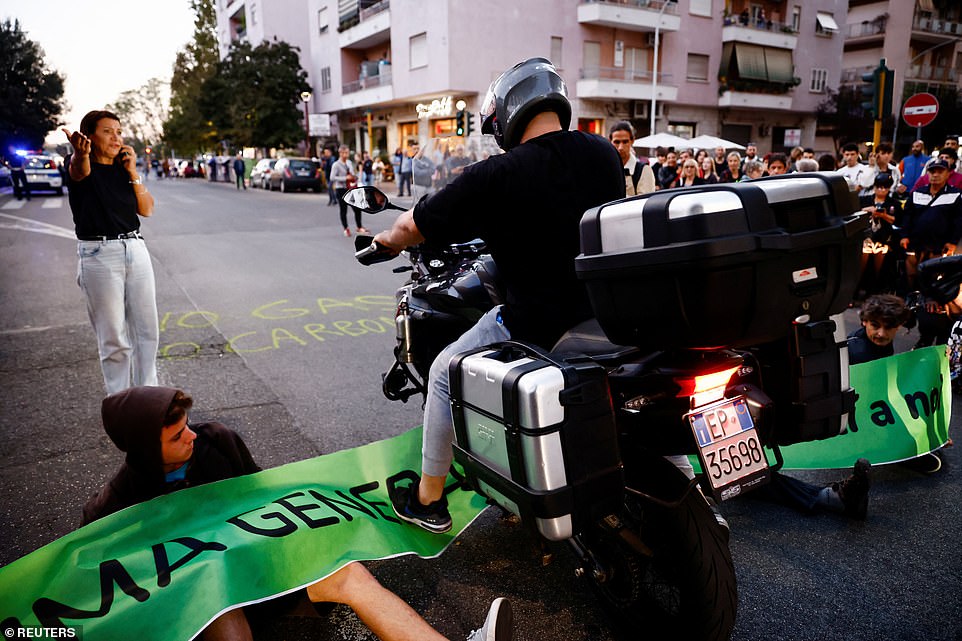 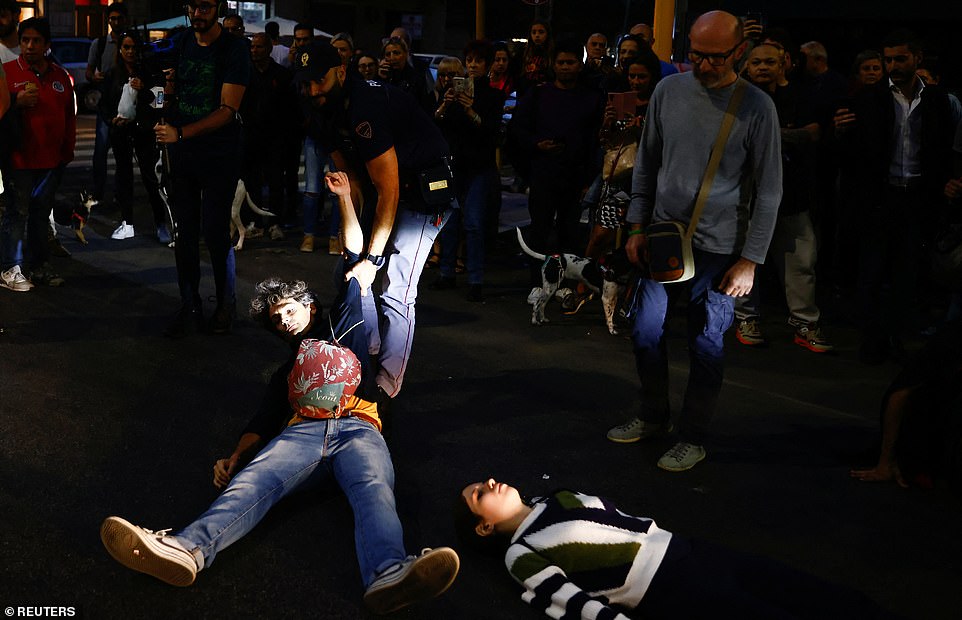 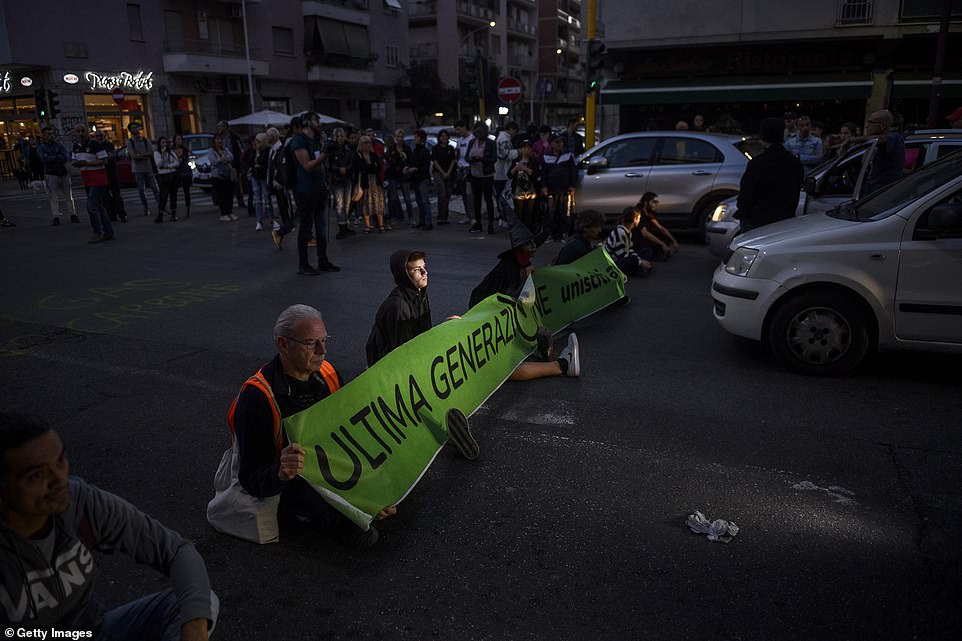 In Berlin, two women wearing orange vests stuck themselves to metal poles supporting a dinosaur skeleton that was over 60 million years old, holding a banner that read: ‘What if the government doesn’t have it under control?’

They did not touch or do any damage to the skeleton itself.

The women were removed by the police after security guards at the museum alerted them to the incident.

The protest was the latest effort to force governments around the world to take swift action to reduce emissions over the damage global warming is doing to the planet.

One of the women, Caris Connell, said she was scared of ‘forest fires, water shortages, famines, and war.

‘Dinosaurs died out, because they could not withstand massive changes to the climate. That is also threatening us,’ added the 34-year-old.

It comes after furious drivers resorted to dragging away a group of eco protesters who sparked fury by halting traffic on a busy motorway during a similar stunt in Rome earlier this month.

The disruption led to angry scenes as drivers got out of their vehicles to remonstrate with the eco-zealots and plead with them to get out of their way. 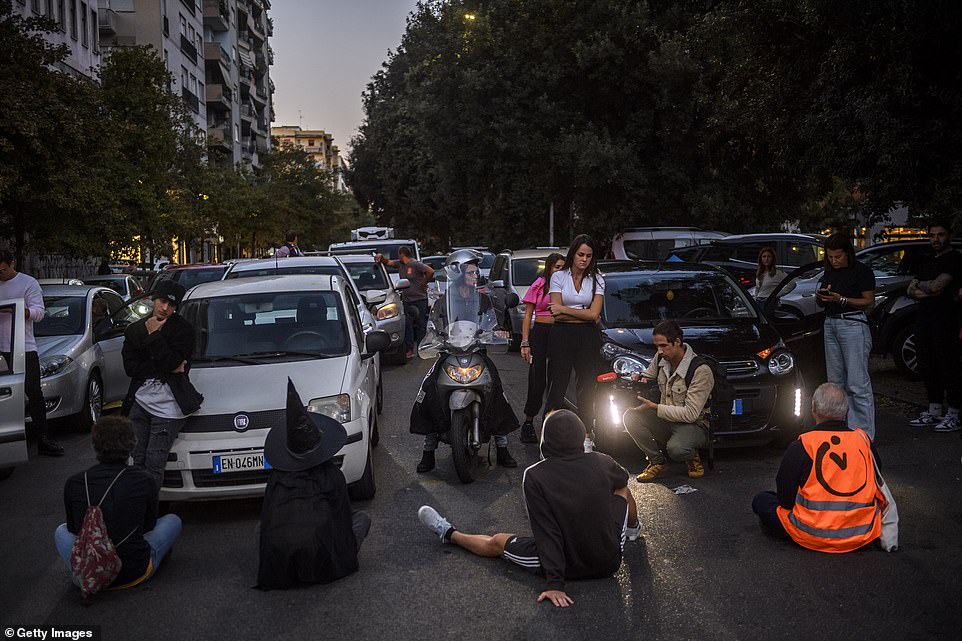 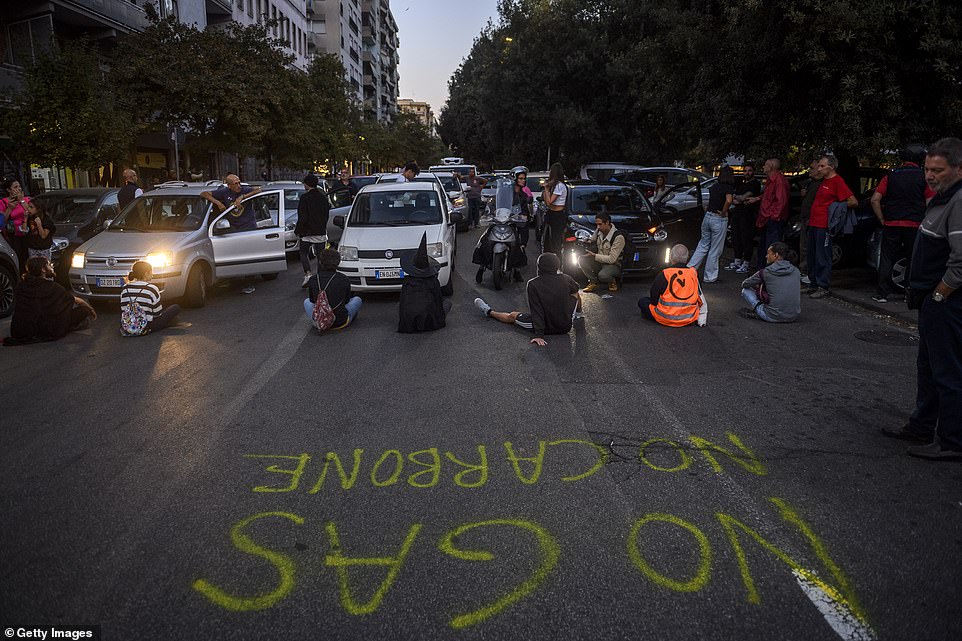 Some took matters into their own hands, physically dragging protesters out of the way.

One man on a motorbike begged to be let through, loudly arguing: ‘I have to go, I’m a doctor.’

But a female activist refused to grant him permission to get through without seeing his medical identification and demanded he handed it over.

He eventually brandished his ID card and the demonstrator allowed him to bypass the human barricade.

In another tense exchange, one angry driver shouted at a protester: ‘You have to move, move out of the f***ing way!’

When he started to physically drag the activist off the road, a woman intervened: ‘Stop! You will hurt him.’

Another man stepped in and confronted the demonstrators, saying: ‘This is not the way of protesting. Organise a proper protest, the motorway is not where you should protest. We have to go to work’

‘Otherwise, this will become poor against poor. People will get angry and they will beat you and this is not fair… You’re p***ing people off.’

The protesters’ banners read ‘no gas’ and ‘no coal’ and they are calling for stronger government action on climate issue.