Jamaica’s press has been as divided in its coverage over Kate and William’s historic tour of the Caribbean as people have been on the ground as the royal visit reignites a public row over Britain’s imperial legacy and calls for independence.

Anti-monarchy protesters demanded apologies from the British state and reparations for slavery even as the Duke and Duchess of Cambridge landed in Kingston yesterday.

Some want the Duke of Cambridge to apologise and it is understood that the future King will publicly address the issue of slavery in a keynote speech tonight as they were accused of benefitting from the ‘blood, tears and sweat’ of slaves.

Jamaican politicians are now pushing for the country to become a republic within two years with a referendum being held before the end of 2022.

But while the questions of the island’s links to the British monarchy continue, William and Kate appeared to be welcomed by many as friends, with mass hysteria witnessed in the Kingston neighbourhood of Trench Town as locals chanted: ‘We love you!’.

And the Jamaican media are also split over the issue, with the Jamaica Observer leading with the headline: ‘Cheers and jeers for Duke and Duchess of Cambridge’ and an interview with a republican activist – while The Star says the royal couple have been ‘embraced’ by locals through ‘love and love alone’ and The Gleaner highlights their ‘taste’ of ‘Trench Town rock’. 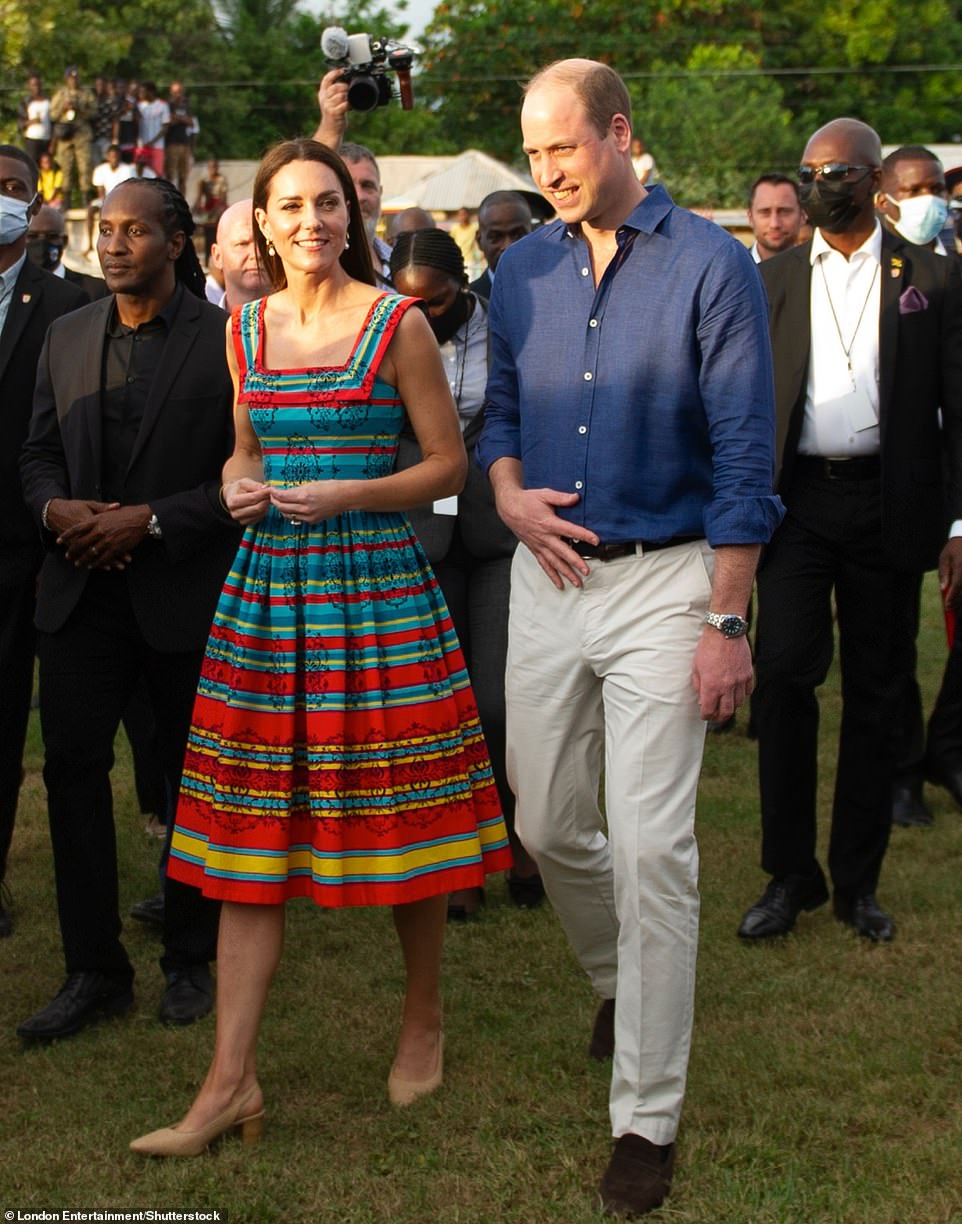 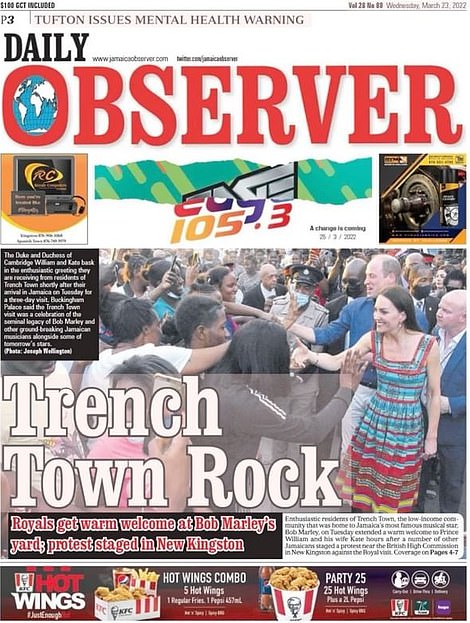 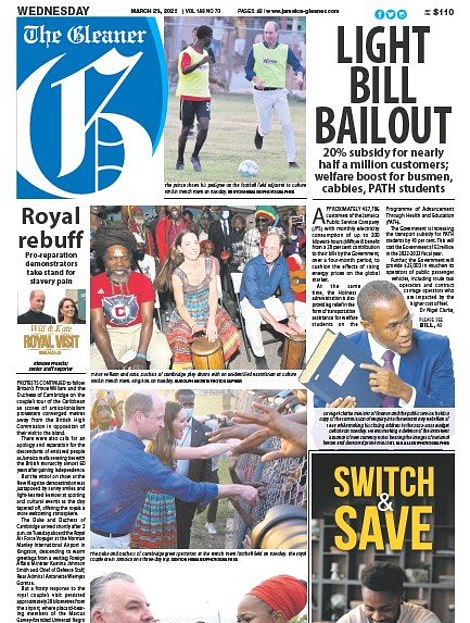 Jamaica Observer leading with the headline: ‘Cheers and jeers for Duke and Duchess of Cambridge’ and an interview with a republican activist – while The Star says the royal couple have been ‘embraced’ by locals through ‘love and love alone’ and The Gleaner highlights their ‘taste’ of ‘Trench Town rock’ 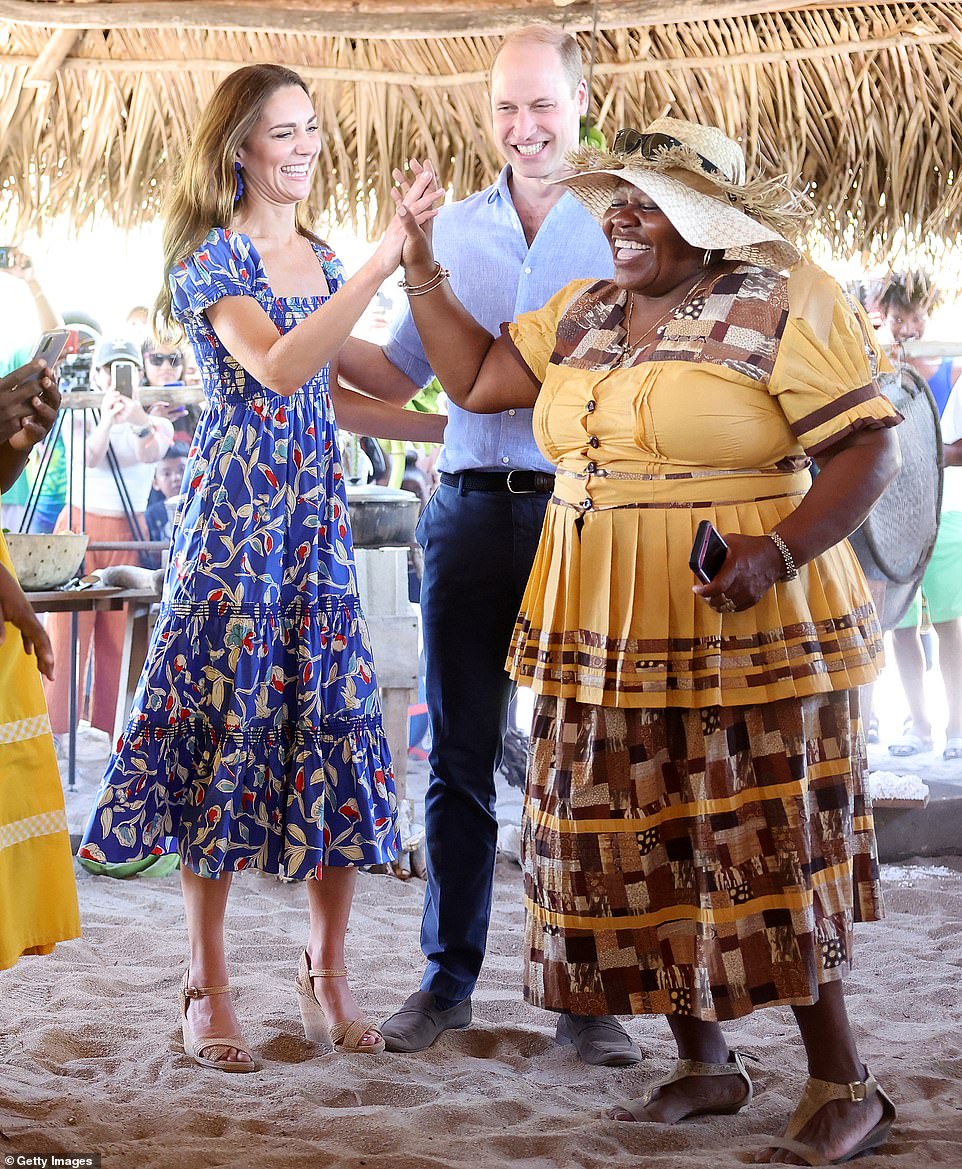 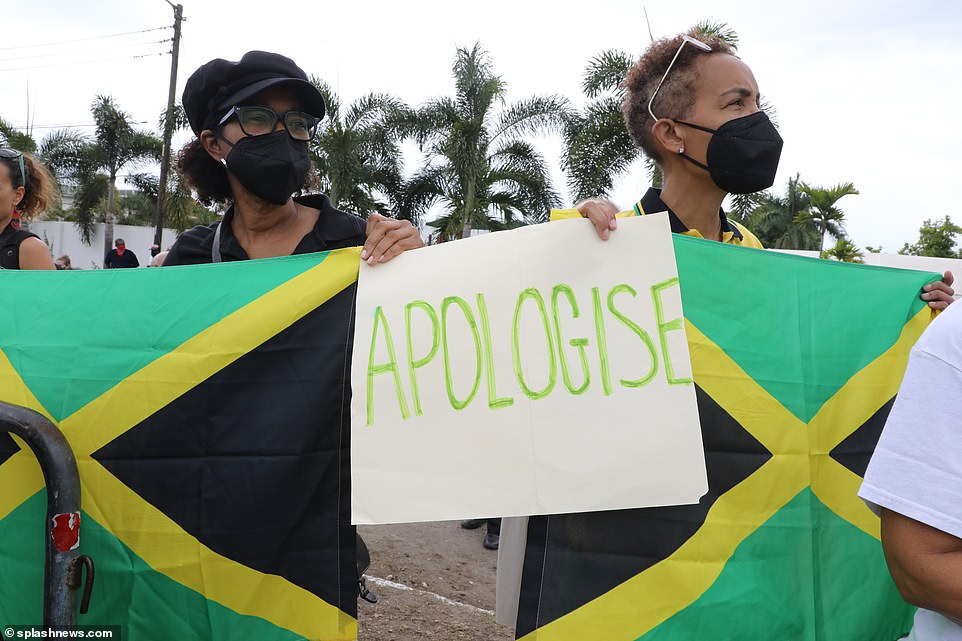 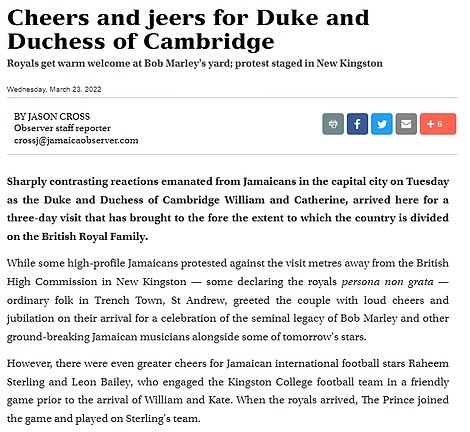 JAMAICAN OBSERVER: ‘Cheers and jeers for Duke and Duchess of Cambridge’

JAMAICAN OBSERVER: ‘Cheers and jeers for Duke and Duchess of Cambridge’

The Jamaican Observer writes: ‘Sharply contrasting reactions emanated from Jamaicans in the capital city on Tuesday as the Duke and Duchess of Cambridge William and Catherine, arrived here for a three-day visit that has brought to the fore the extent to which the country is divided on the British Royal Family.

‘While some high-profile Jamaicans protested against the visit metres away from the British High Commission in New Kingston – some declaring the royals persona non grata – ordinary folk in Trench Town, St Andrew, greeted the couple with loud cheers and jubilation on their arrival for a celebration of the seminal legacy of Bob Marley and other ground-breaking Jamaican musicians alongside some of tomorrow’s stars.

‘However, there were even greater cheers for Jamaican international football stars Raheem Sterling and Leon Bailey, who engaged the Kingston College football team in a friendly game prior to the arrival of William and Kate. When the royals arrived, The Prince joined the game and played on Sterling’s team.’ 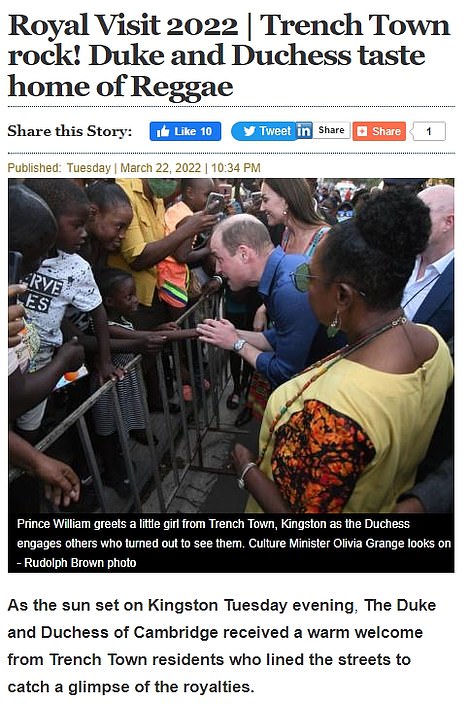 It goes on: ‘Trying to stay away from what he termed as politics, British Broadcasting Corporation royal correspondent Jonny Dymond told the Jamaica Observer that the reception that the royal couple received was phenomenal.

‘However, one Trench Town resident, who gave her name as Angel, did not share in the excitement.’

The Gleaner writes: ‘As the sun set on Kingston Tuesday evening, The Duke and Duchess of Cambridge received a warm welcome from Trench Town residents who lined the streets to catch a glimpse of the royalties.

‘The couple first interacted with some residents who watched them get into a bobsleigh – perhaps an ode to the movie Cool Runnings.

‘A few metres down the road, the royal couple was welcomed to Culture Yard, reggae icon Bob Marley’s former home turned cultural centre and museum. The crowd roared on the sidelines roared in approval.

‘Chief tour guide of the Trench Town Culture Yard Donnette Dowe was elated that she was to meet the couple. “I’m excited that they chose to come to visit us,” she said.’

The Star writes: ‘While protests mounted all across the Corporate Area, Trench Town locals say they are happy to have welcomed the heir to the British throne. 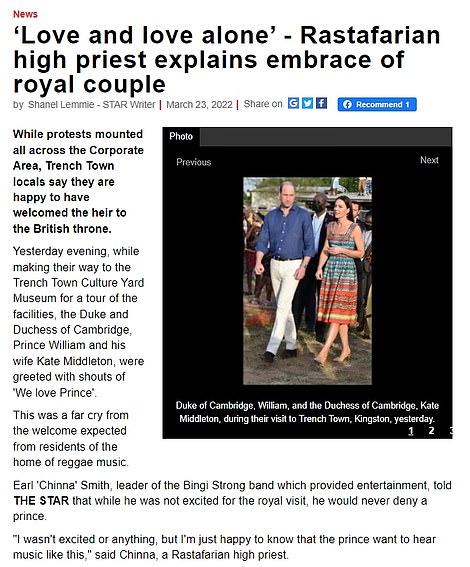 ‘Yesterday evening, while making their way to the Trench Town Culture Yard Museum for a tour of the facilities, the Duke and Duchess of Cambridge, Prince William and his wife Kate Middleton, were greeted with shouts of “We love Prince”.

‘This was a far cry from the welcome expected from residents of the home of reggae music.

‘Earl “Chinna” Smith, leader of the Bingi Strong band which provided entertainment, told THE STAR that while he was not excited for the royal visit, he would never deny a prince.

‘“I wasn’t excited or anything, but I’m just happy to know that the prince want to hear music like this,” said Chinna, a Rastafarian high priest.

‘“If you have one minute fi deal wid di prince, weh you a guh do, resist him and fire bun him? Dem ting deh a outdated ting. Di prince waah play our drum, alright that is a connection as simple as it look. Weh you a guh do, tell him doh play our drum? Like how do Rasta man tell woman doh play di drum? That is just too much resistance.”’

THE OBSERVER 2.0: ‘Along with an apology for slavery, reparations is a must, says Queen Ifrica’

The Observer also writes: ‘Signalling that she represents the “free Jamaicans that were here before any slave ships or any colonisers”, reggae artiste Queen Ifrica says she is ready to see the end of the British Monarch to dissolve its control over Jamaica.

‘Queen Ifrica, who was present at Tuesday morning’s protest at the British High Commission in Kingston, said it’s time for the Queen of England to “gwaan and nuh look back”. 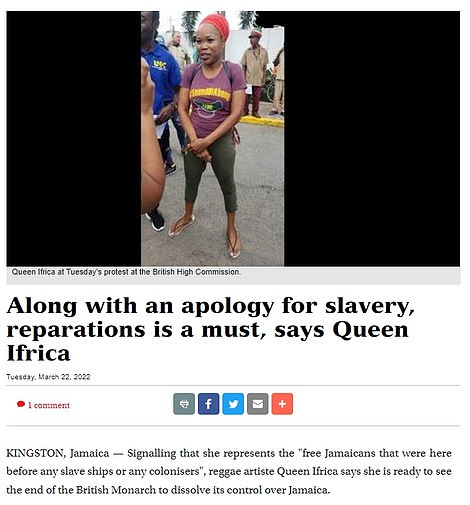 THE OBSERVER: ‘Along with an apology for slavery, reparations is a must, says Queen Ifrica’

‘“I represent for the free Jamaicans that was here before any slave ships or any colonisers come up. We are the first Jamaicans dem weh did deh yah, the first inhabitants of this land yah and dat is why me deh here – fi tell the Queen say she a come off a di throne. Gwaan and nuh look back,” the reggae singer said.

‘Highlighting the Queen’s 70-year rule, Ifrica said her stepping down and handing over the reign to her grandchildren will only continue a legacy that Jamaica should be seeking to part with.

‘“This lady here siddung pan a throne fi 70 years. She is about to celebrate that 70 years by stepping down and giving it to her grandchildren and her peers, while we are still in the very slavery that she came on the throne with,” she said.

‘“She lived 70 years on that throne and slavery is still in existence. Jamaicans are still dealt with as slaves. So we are saying, if it is that you don’t come here to tell us that you really feel a way for what you guys did to us as a people and are still doing to us, then it would not be significant for any of them to be here today.”

‘Ifrica shared that along with an apology, “reparations is a must” as she insisted the British Monarch correct the ills meted out to Black people over the last 400 years.’ 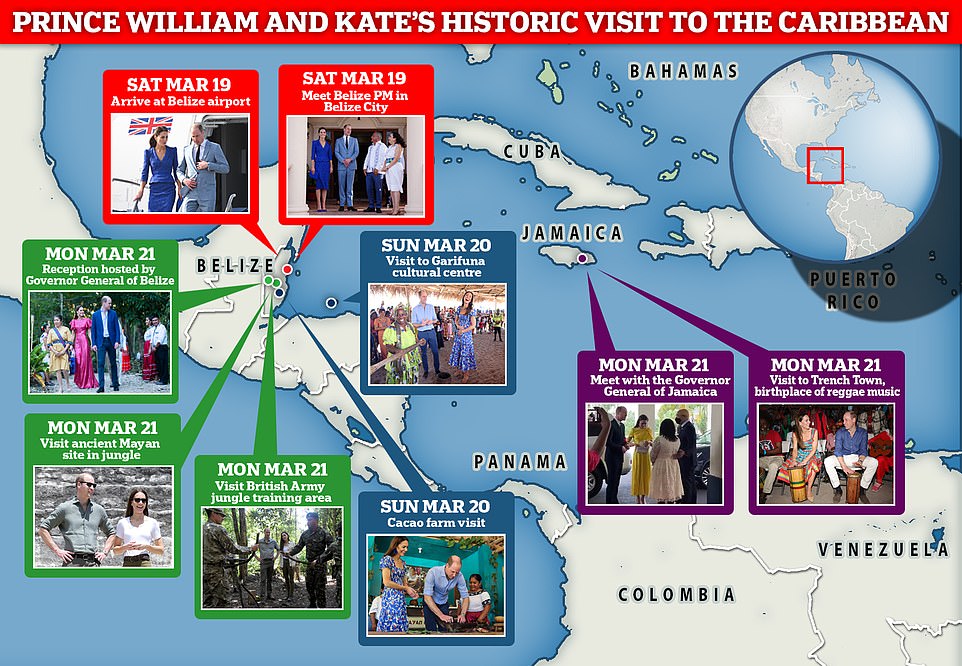 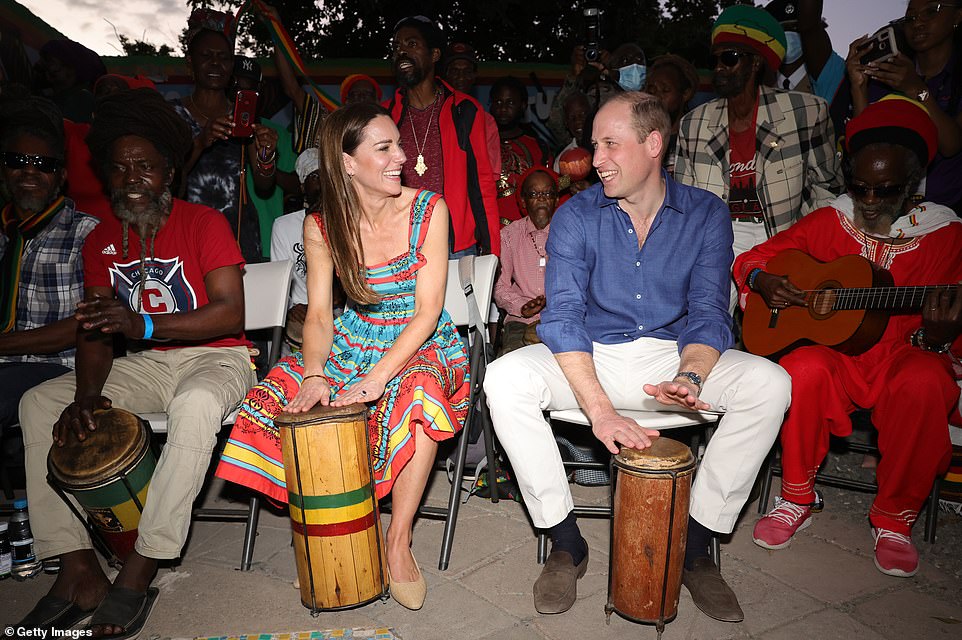 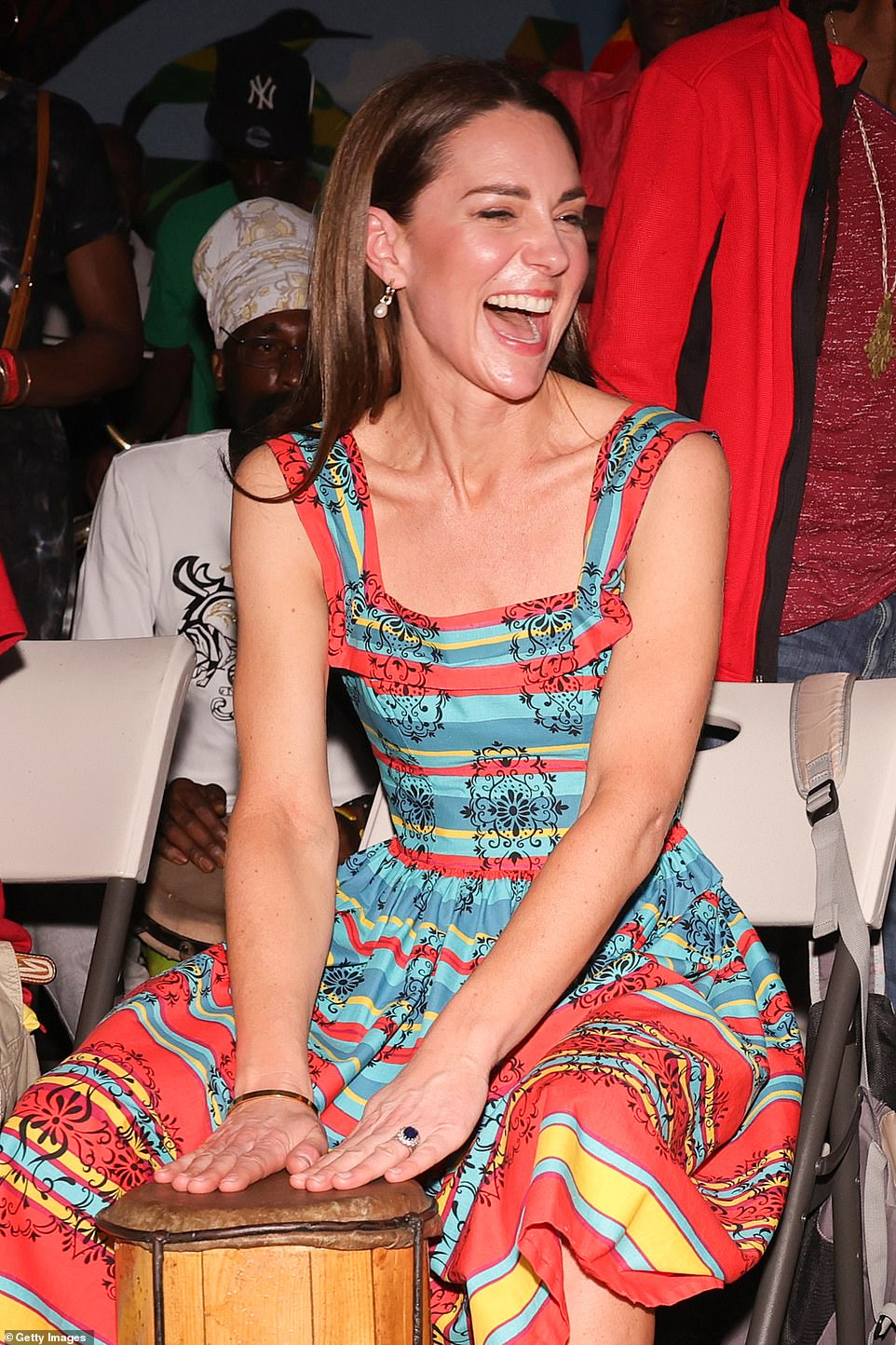 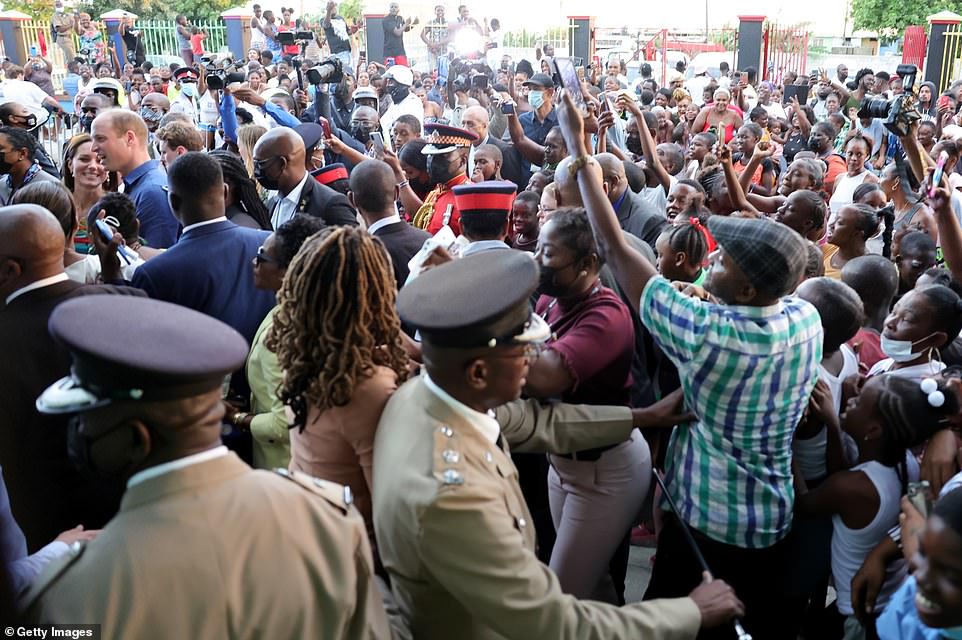 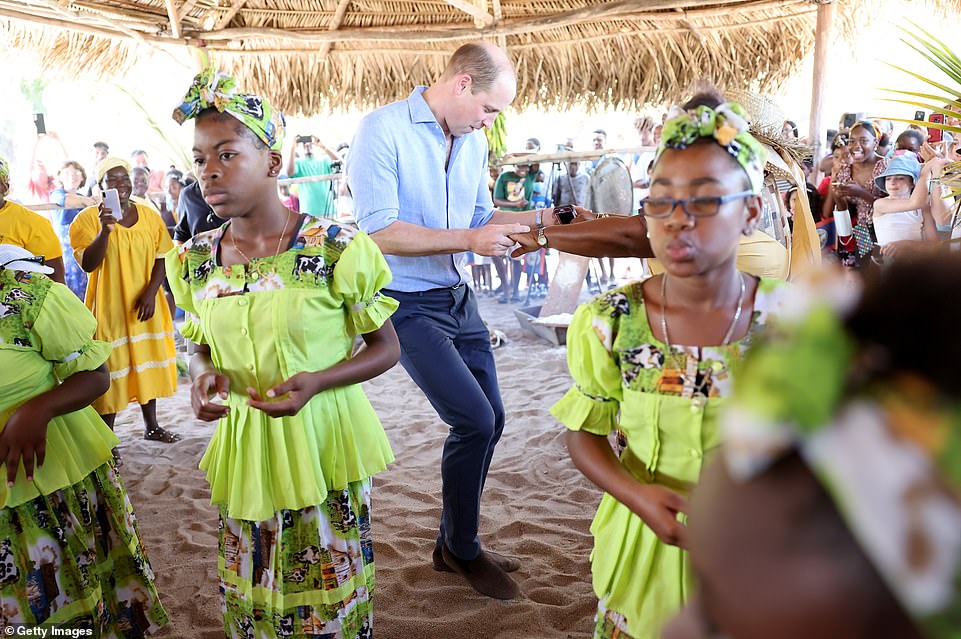 Protesters in Jamaica raised their fists on Tuesday as they donned T-shirts emblazoned with a pair of shackled Black wrists surrounded by the phrases ‘Seh Yuh Sorry!’ and ‘Apologize now!’ as they demonstrated just hours before William and Kate arrived.

The protest in front of the British High Commission in Kingston comes a couple of days after dozens of prominent leaders in Jamaica publicised a letter demanding that Britain apologise and award its former colony slavery reparations.

They also decried the weeklong Central American and Caribbean tour that the Duke and Duchess of Cambridge embarked on Saturday, which coincides with Jamaica’s 60th independence anniversary and the 70th anniversary of the Queen’s coronation.

‘Kings, Queens and Princesses and Princes belong in fairytales, NOT in Jamaica!’, read one poster held aloft by a young girl who joined the protest.

The royal couple’s trip, which began with a stop in Belize followed by scheduled visits to Jamaica and the Bahamas, was organised at the Queen’s behest as some countries debate cutting ties to the monarchy like Barbados did in November.

Mike Henry, a veteran Jamaican lawmaker, said in a phone interview that while the topic has been discussed, he worries that demands for an apology and reparations would be rendered moot if the island stopped pledging allegiance to the queen. 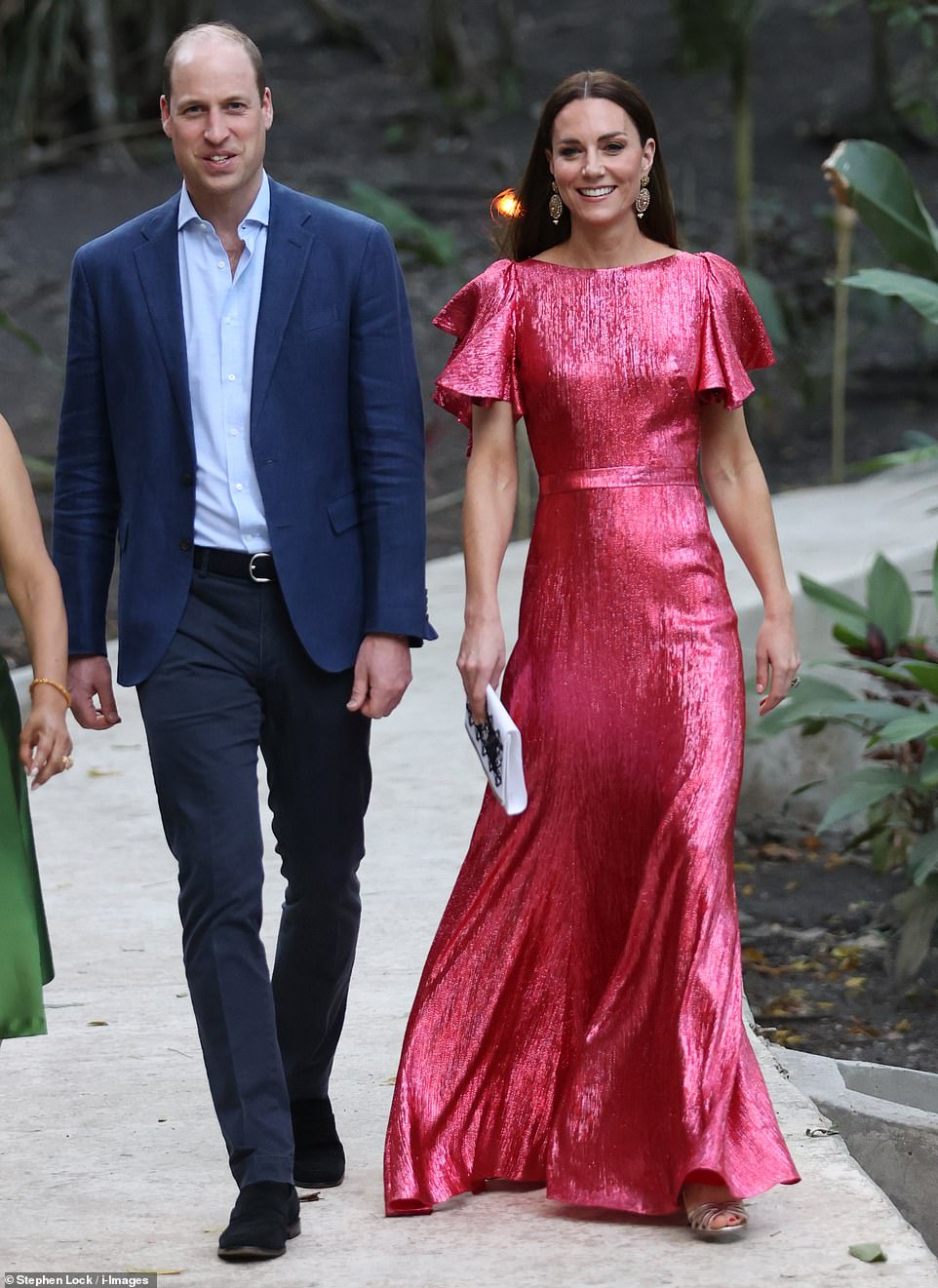 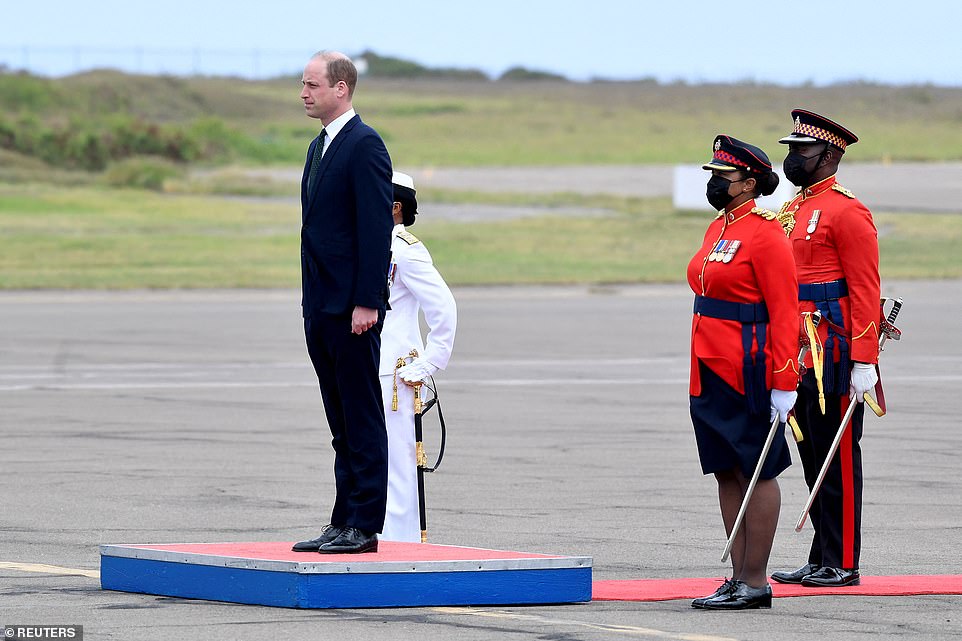 Prince William stands as he and Catherine, Duchess of Cambridge continue their tour of the Caribbean 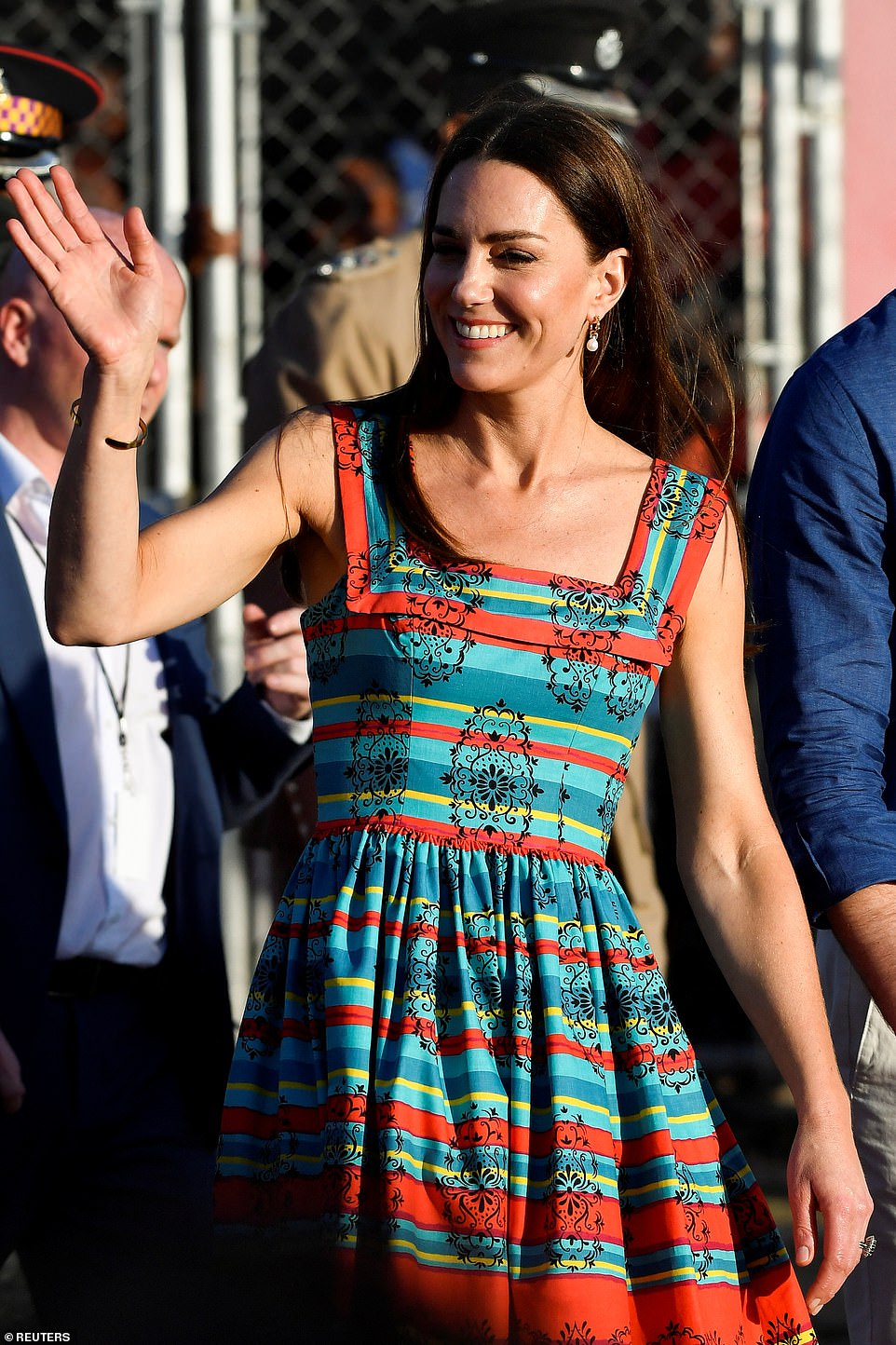 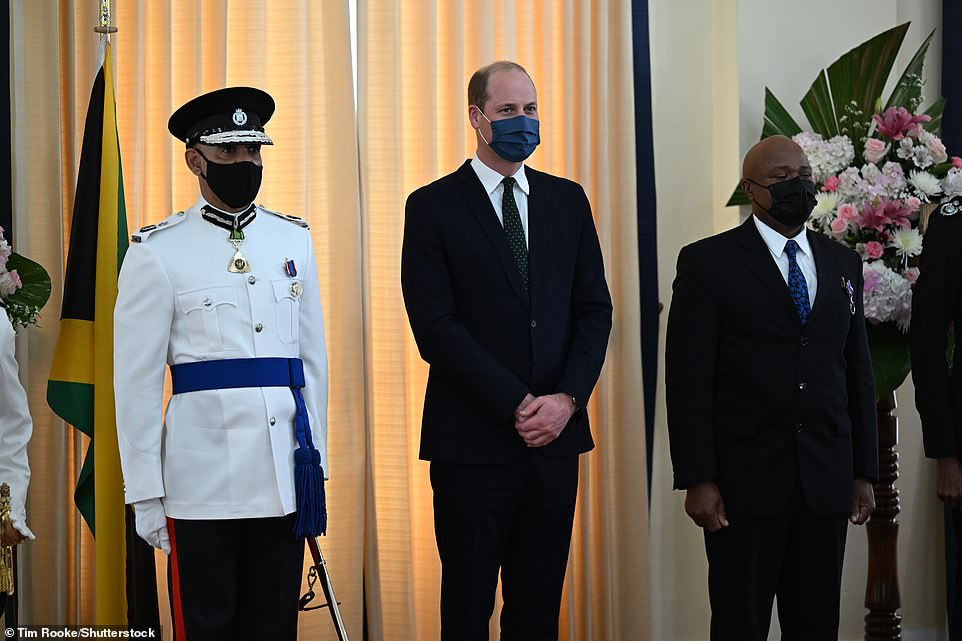 Prince William at the Governor Generals in Kingston at the British High Commission. The couple were kept well away from protestors outside 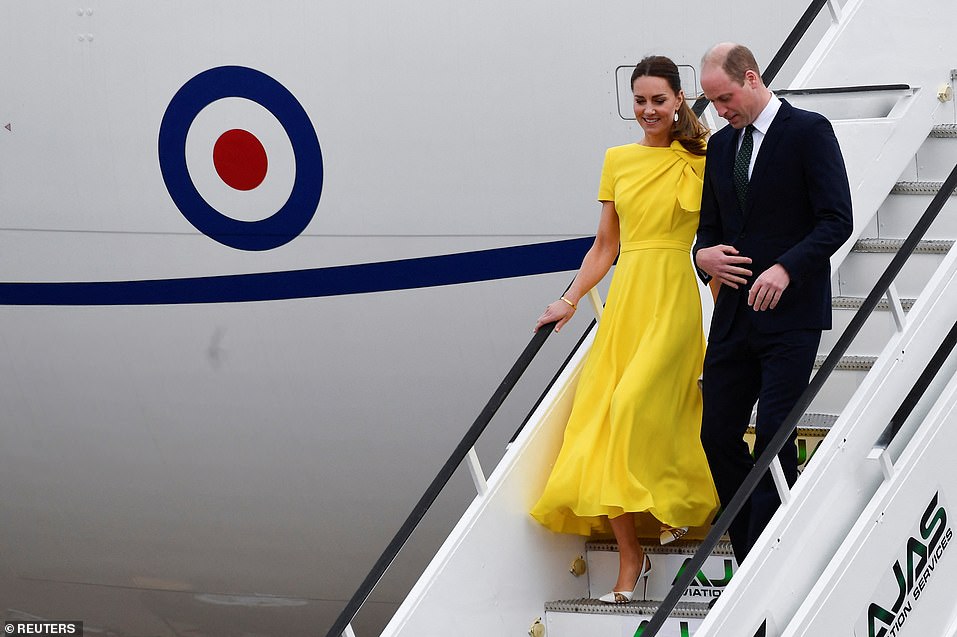 Prince William and Kate, Duchess of Cambridge, leave the RAF Voyager aircraft at Norman Manley International Airport as they continue their tour of the Caribbean 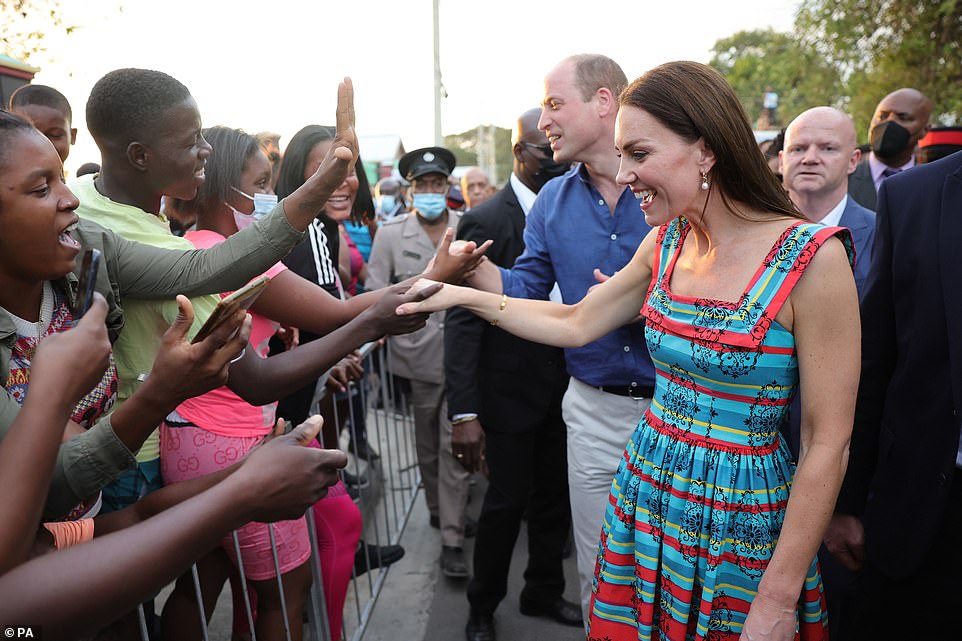 The Duke and Duchess of Cambridge shake hands with locals during a visit Trench Town, the birthplace of reggae in Kingston, Jamaica, on the fourth day of their Caribbean tour

Maziki Thame, a senior lecturer at the University of the West Indies, noted that Jamaicans have been seeking reparations for decades.

‘This is not a new cause,’ she said in a phone interview as she prepared to join the protest. ‘The question is whether it will get any traction…whether the British are ready to contend with their history.’

The British Empire controlled Jamaica for more than 300 years and forced hundreds of thousands of African slaves to toil the island under brutal conditions. Sugar replaced tobacco and cocoa as the main crop, with some 430 sugar estates reported by the mid-1700s, up from 57 nearly a century prior, according to Jamaica Information Services, a government agency.

The group protesting the royal visit noted in its letter that the British raped and killed thousands of slaves as it sought an apology for 60 reasons, including ‘for refusing to acknowledge the historic trade in Africans as a crime against humanity’, and for ‘pretending that the British led the abolition movement, when our ancestors worked, prayed and fought hard for this’.

William and Kate are scheduled to spend two days in Jamaica, where they’re expected to meet with government officials and tour Trench Town, the gritty birthplace of rocksteady and reggae where Bob Marley grew up.

The monarchy has said that Britain and Jamaica have a strong trade relationship, with the island exporting goods including rum and raw cane sugar to the UK

An estimated 55,000 British citizens live in Jamaica, while some 800,000 people of Jamaican descent live in the United Kingdom.

The relationship between the two countries soured in recent years after some Caribbean people who had long lived in Britain legally were denied jobs, housing or medical care, with some deported because they didn’t have the required paperwork. Britain has since apologised and pledged compensation.