Caracas: President Nicolas Maduro wants Venezuelan women to have many children as a way to boost the country, which has seen millions of people flee in recent years to escape its economic crisis.

Maduro made the exhortation during a televised event on Tuesday evening, Caracas time, for a government program promoting various birth methods. 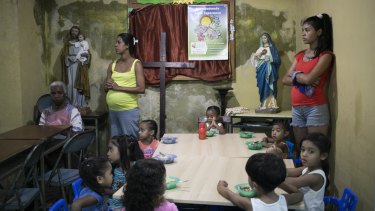 Children eat at a soup kitchen as adults wait to be served in the Petare slum, in Caracas, Venezuela, last week.Credit:AP

"God bless you for giving the country six little boys and girls," the socialist President told a woman at the event. "To give birth, then, to give birth, all women to have six children, all. Let the homeland grow!"

The comments drew criticism from human rights activists and others who noted Venezuelans already are struggling to provide food, clothes and health care for their families.

"It is irresponsible, on the part of a president of the Republic, to encourage women to have six children simply to make a homeland, when there is a homeland that does not guarantee children their lives," said Oscar Misle, founder of CECODAP, a group that defends the rights of young people.

The country's economic collapse, coupled with its deep political divisions, led more than 4.5 million Venezuelans to emigrate since 2015, according to the United Nations. 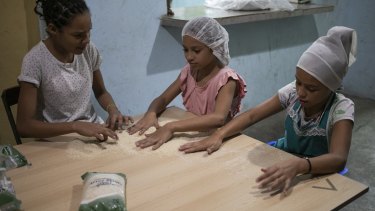 Arbeilis, 11, from left, Cardeilis Torrres, 10, and Camila Grateron, 10, clean rice infested with bugs before cooking it, at a soup kitchen in the Petare slum, in Caracas.Credit:AP

"You have to be very cynical to ask that we have six children," said Magdalena de Machado, a housewife picking through scraggly vegetables at a street market in the centre of Caracas for making soup for her sons, ages 2 and 4.

"Only two days a week we can serve some meat and chicken. For years, we were late having children. We had them when we thought we were better off, but in the last year we've been buying less and less food," she said. 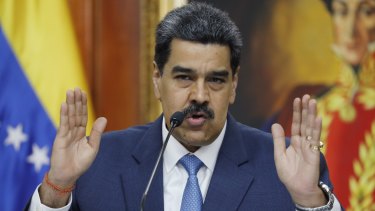 Venezuelan President Nicolas Maduro wants to boost the economy by raising the country’s birth rate. According to the UN World Food Program, one of every three Venezuelans are unable to get enough food to meet their basic dietary needs. Credit:AP

Machado and others also questioned how women could be expected to increase births amid the deterioration in the country's healthcare, both for adults and children.

A report by Humans Rights Watch in collaboration with the Johns Hopkins Bloomberg School of Public Health concluded last year that the health system in Venezuela has "totally collapsed". Among other problems, it cited rising levels of maternal and child mortality as well as the spread of vaccine-preventable diseases.