A LIFE-THREATENING heat wave is set to hit the Pacific Northwest TODAY as Americans brace for record high temperatures.

Areas such as Seattle and Portland will see temperatures soar to 30 to 40 degrees above average as the extreme weather is set to continue into next week. 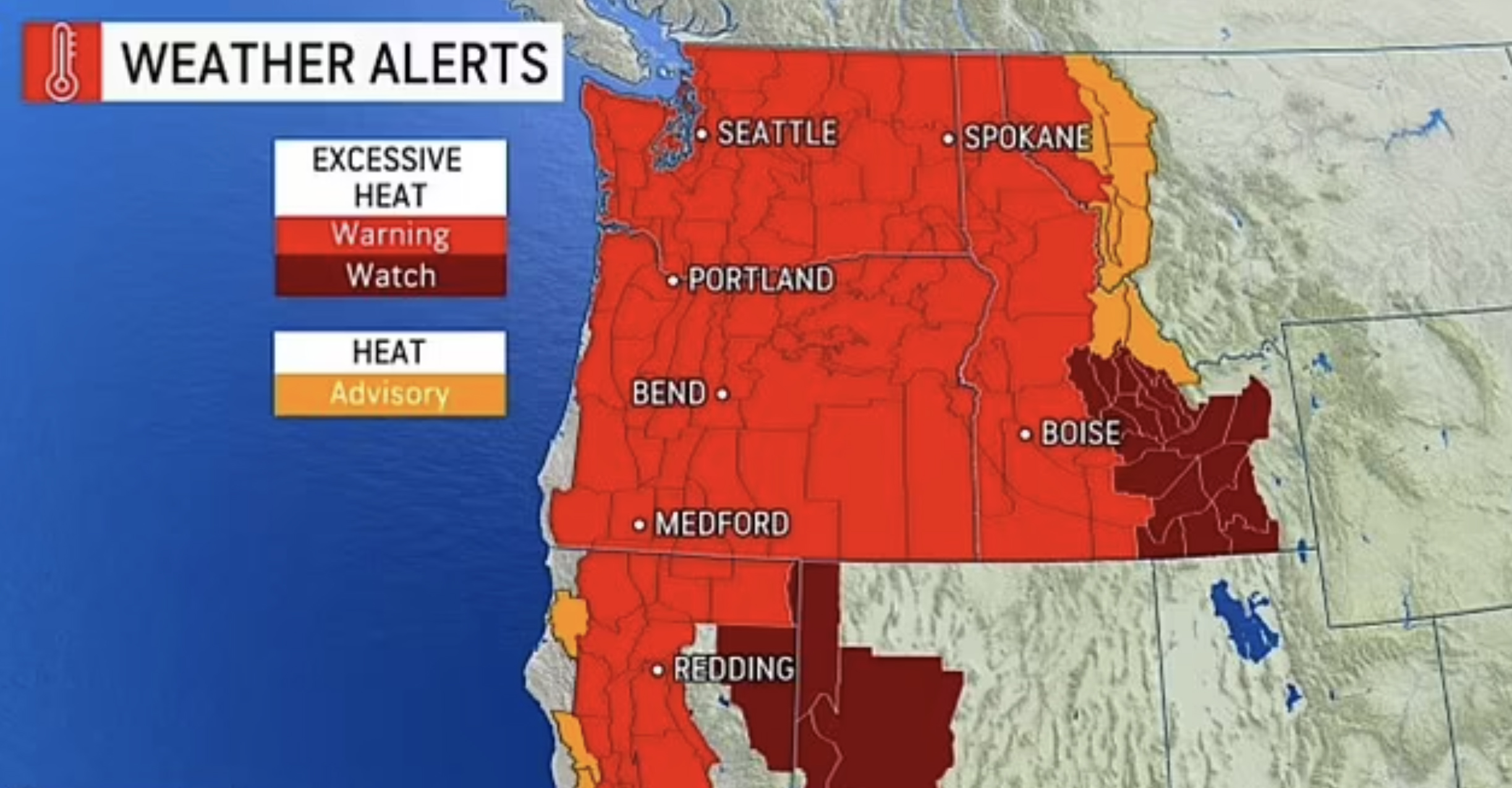 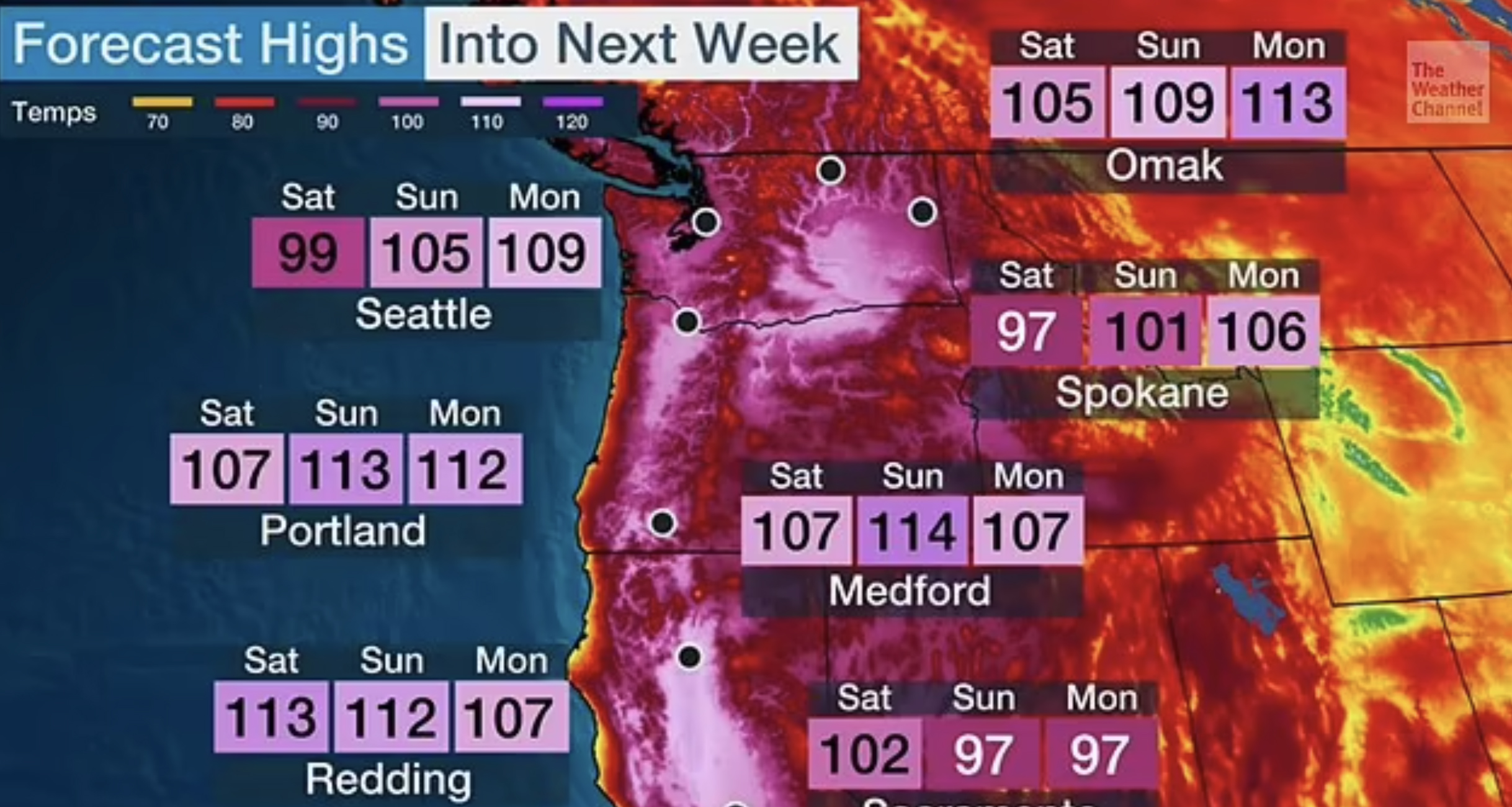 Weather officials have issued excessive heat warnings to more than 13 million residents across states in Washington, Oregon and Idaho.

Those living in Navada and Montana are also under advisories.

The dangerous heat is forecast to peak from Saturday through Monday.

The National Weather Service tweeted: “A dangerous and record-breaking heat wave will begin across the Northwest U.S. south into southern California today lingering through this week.

“While the heat should abate along the West Coast by midweek, it is expected to persist inland and expand into the Rockies.”

According to the Associated Press, the extreme weather is expected to break all-time records.

It follows previous weather warnings issued to more than 50 million Americans over the past month. 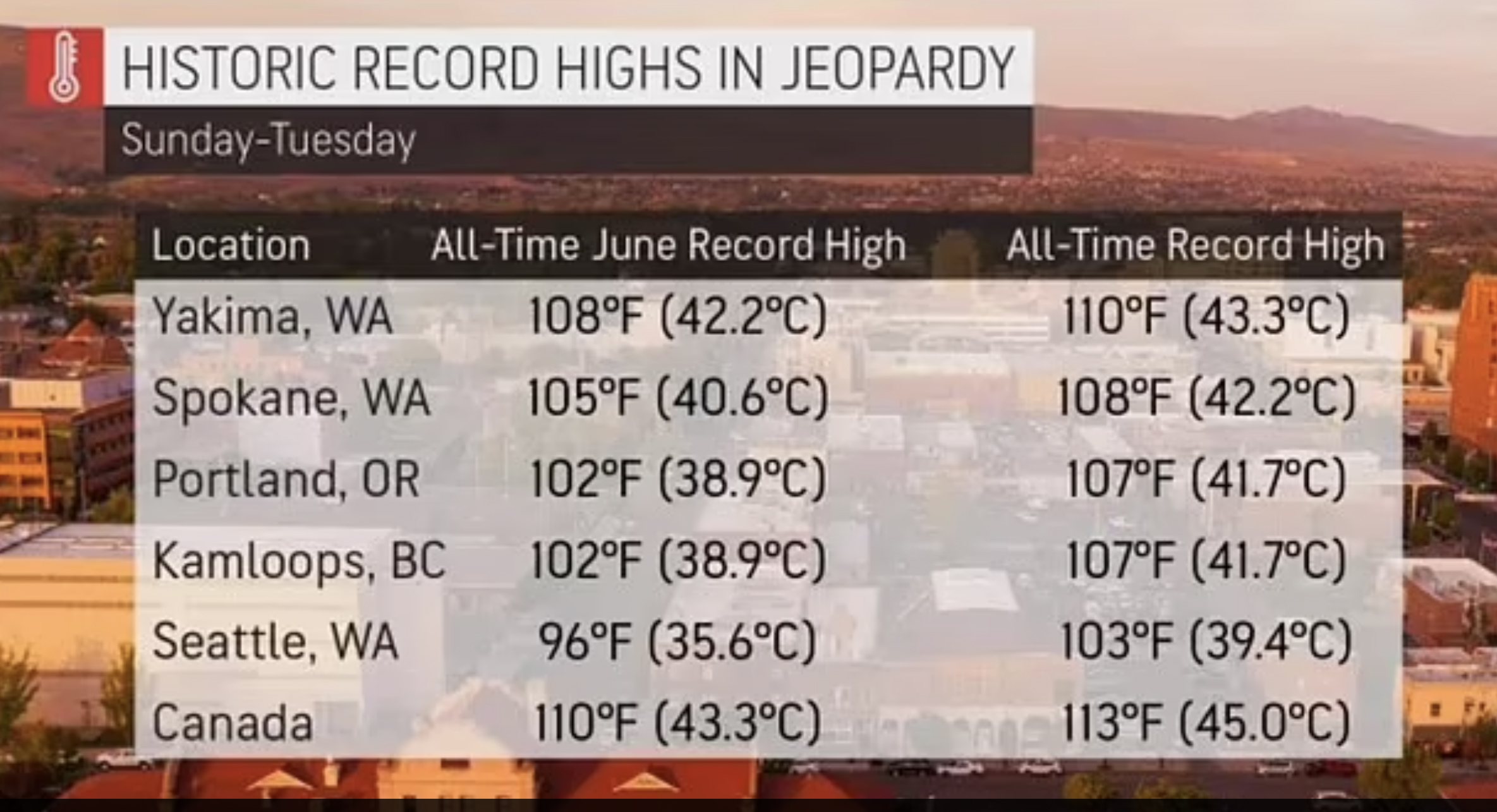 The Washington Post reported that Seattle will face 104 degree temperatures on Monday, exceeding the city’s highest-ever temperature recorded of 103 degrees.

The state has only hit 100 degrees three times in recorded history.

“If you're keeping a written list of the records that will fall, you might need a few pages by early next week,” NWS Seattle tweeted.

The National Weather service there tweeted: “Sunday is shaping up to be the hottest day with high temps soaring to an astonishing 105-110 degrees for the interior lowlands.

“Widespread highs at or above 100 degrees are likely on Saturday and Monday as well. STAY COOL!” 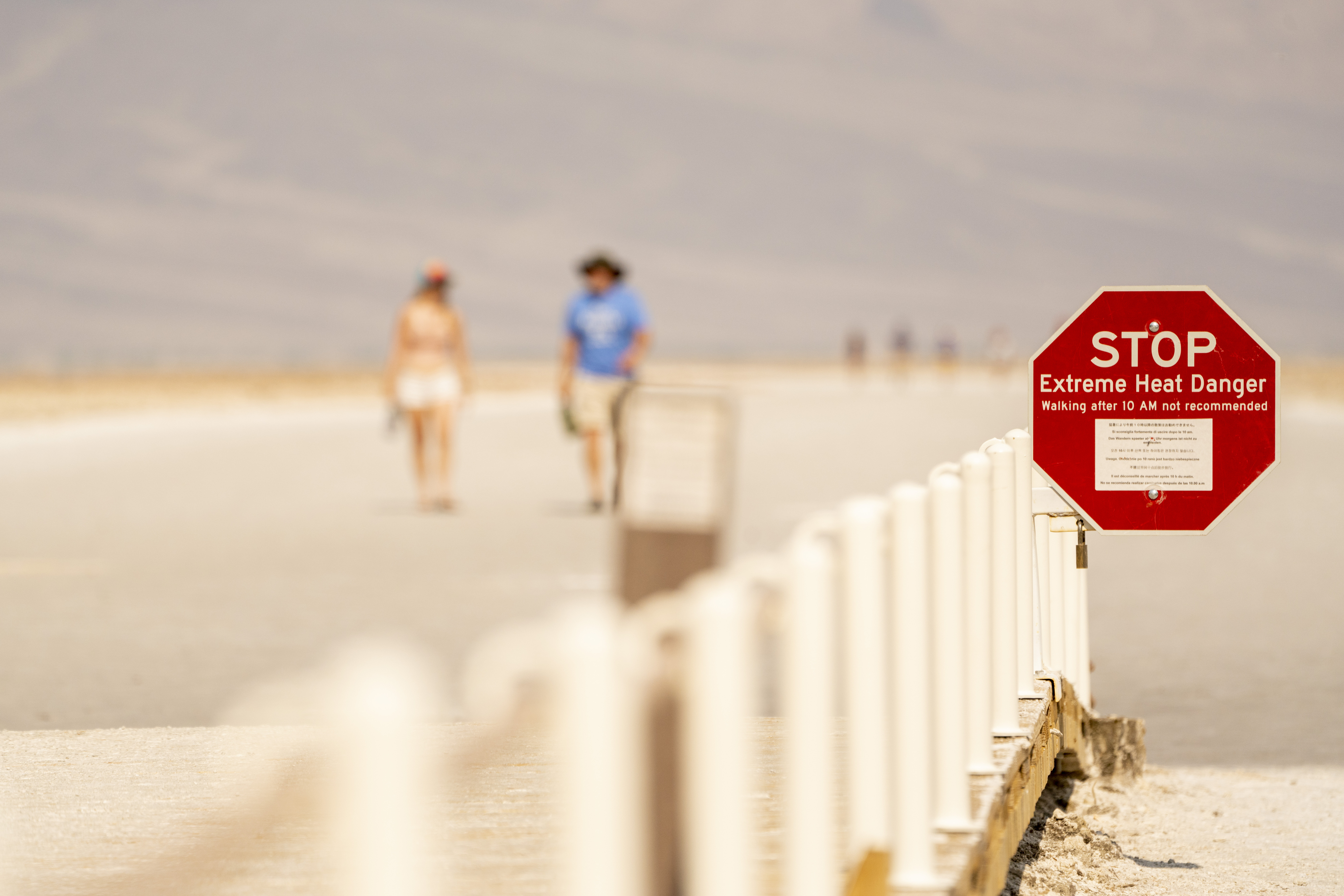 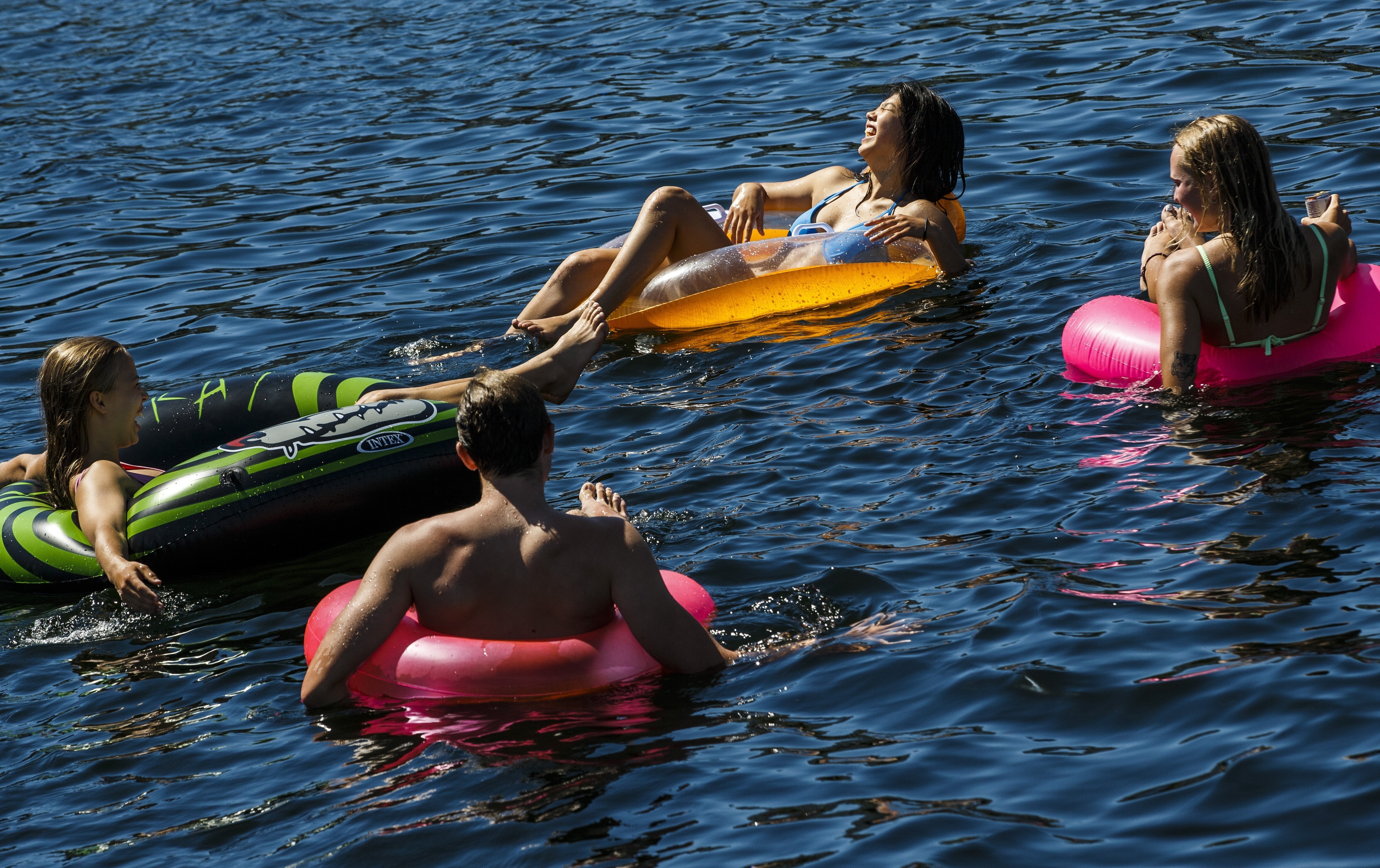 According to AccuWeather, average highs in the Northwest region in June usually range in the 70s to the 80s.

“There are typically a few rounds of heat in the Pacific Northwest each summer, but this particular heat wave looks quite extreme,' said AccuWeather Meteorologist Brian Thompson.

This extreme heat will be the result of a large northward bulge in the jet stream.

“When the jet stream behaves this way, the air at mid- and upper levels of the atmosphere becomes very warm,” AccuWeather Senior Meteorologist Alex Sosnowski added.

The blazing temperatures have sent residents in the affected areas scrambling to cooling centers and to stores to purchase air conditioning as they prepare for the unprecedented heat.

AP reports that many Northwesterners don't even own air conditioning, leading to stores in the region selling out of portable air conditioners and fans.

In Portland, some hospitals have even canceled outdoor vaccination clinics in preparation for the heat as cities in the region opened cooling centers.

Multnomah County also plans to open three cooling centers this weekend, including one at the Oregon Convention Center in Portland.