Lisa Nandy tonight blasted Sir Keir Starmer and labelled the Brexit policy he helped craft a ‘disaster’ as she tried to salvage her Labour leadership campaign.

Ms Nandy and Sir Keir engaged in fiery clashes as they took part in the third TV debate of the race to replace Jeremy Corbyn alongside fellow challenger Rebecca Long-Bailey.

Ms Nandy wasted no time in attacking Sir Keir as she said the Brexit position he had steered the party towards of remaining neutral on the issue ‘was a disaster’ at the ballot box.

She said that voters on both sides of the divide felt ‘profoundly disrespected’ by the policy and that had played a major part in Labour’s brutal general election defeat in December.

Ms Nandy said there had been a ‘collective failure of leadership’ in the party on Brexit as she stood next to the shadow Brexit secretary.

Sir Keir desperately tried to defend himself as he said he did not ‘shirk’ from his involvement in the party’s Brexit policy but he urged Labour to now move on, claiming that ‘Leave/Remain is over’.

Ms Nandy and Sir Keir also clashed over the party’s handling of its anti-Semitism crisis.

Ms Nandy, who quit the Labour frontbench in 2016, said that when she was in the shadow cabinet she ‘spoke up’ about the issue.

Taking on Sir Keir, she said: ‘I believe that you are sincere about this, but if we do not acknowledge how badly the shadow cabinet as a whole got this wrong we will not earn the trust of the Jewish community.’

Sir Keir told her: ‘You were in the shadow cabinet when this issue came up as well.’

Ms Nandy shot back: ‘I spoke out publicly and then I left and I didn’t return.’

Meanwhile, Ms Long-Bailey admitted that Tony Blair was a ‘good leader’ of the Labour Party.

The shadow business secretary has the backing of the current leadership in the race and is viewed as the ‘continuity Corbyn’ candidate of the hard-left – a label she has rejected.

Pushed on whether she thought Mr Blair had done a good job, she replied: ‘Any Labour leader who won a general election was a good leader.’ 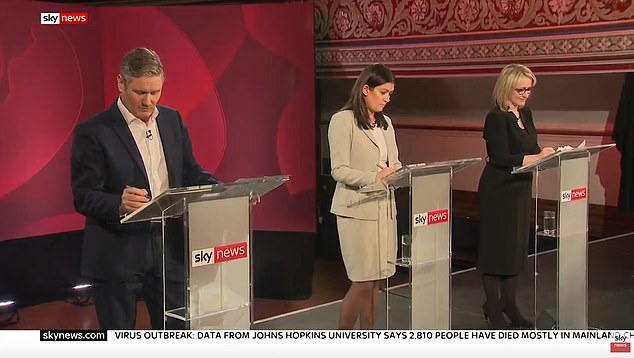 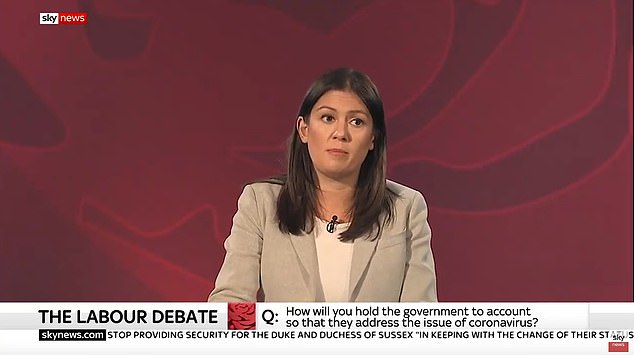 Sir Keir is the overwhelming favourite to become the next leader of the party with Ms Long-Bailey’s and Ms Nandy’s bids faltering.

This evening’s hustings event in Dewsbury represented their best chance of reviving their campaigns.

Both are already in desperation mode despite the fact that voting only started on Monday and is not due to finish until April 2, with a winner announced on April 4.

Many party members are expected to vote early in the contest because they have already made up their minds which means the trailing pair must act now if they are to stop Sir Keir.

The severity of Ms Nandy’s and Ms Long-Bailey’s respective positions was highlighted by a YouGov poll published yesterday which suggested Sir Keir is on course to cruise to an easy victory in the first round of vote counting.

The survey of party members put Sir Keir on 53 per cent of the vote with Ms Long-Bailey second on 31 per cent and Ms Nandy on just 16 per cent.

Should Sir Keir manage to replicate the poll numbers in the contest itself he would pass the 50 per cent needed to win at the first time of asking. 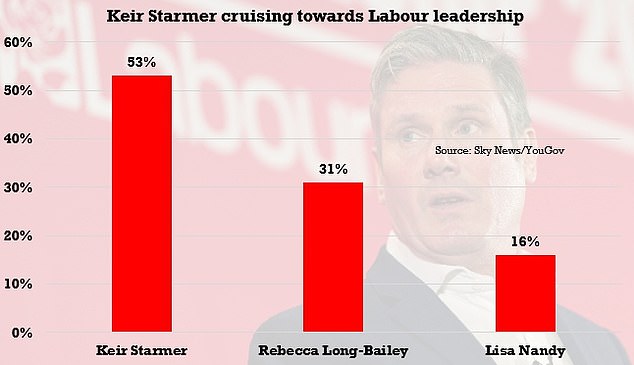 The leadership battle uses an alternative vote system with activists asked to rank the candidates in order of preference, which can lead to multiple rounds of vote counting.

If one of the candidates does not pass the 50 per cent threshold in the first round, the candidate in last place is eliminated and their second preference votes are then allocated to the two remaining challengers.

But the YouGov poll suggests there may not be a need for a second round of vote counting if Sir Keir maintains his current momentum.

All three candidates were asked this evening who they would put as their second choice – but all three dodged the question.

Ms Long-Bailey urged activists to ‘just put one choice and that is RLB all the way’.

The poll numbers published yesterday represented a massive boost to Sir Keir’s campaign but they are likely to spark warnings from his allies against complacency.

He was ahead of Ms Long-Bailey among most groups polled, including men, women, the young, old, trade unionists and Remain supporters.

Ms Long-Bailey – the Corbynista candidate – was only ahead among Labour Brexiteers and supporters of hard Left organisation Momentum.

The publication of the poll numbers came after Sadiq Khan, the Labour Mayor of London, formally announced he is backing Sir Keir.

Mr Khan tweeted: ‘I will be voting for Keir Starmer to be the next Labour leader. I’ve known Keir for decades. He’s the best person to unite our party, take the fight to the Tories and put Labour in government.’

The Labour leadership contest was triggered after Jeremy Corbyn decided to quit following the party’s disastrous general election in December.

He led Labour to its worst set of results since the 1930s and immediately announced he would be standing down.

Who has made it into the final round of the Labour leadership contest?

Voting in the Labour leader and deputy leader contests will start next Monday and close on April 2 with the winners announced on April 4.

There are three candidates in the running to replace Jeremy Corbyn: Sir Keir Starmer, Rebecca Long-Bailey and Lisa Nandy.

There are five candidates in the running to be the next deputy leader: Angela Rayner, Rosena Allin-Khan, Richard Burgon, Ian Murray and Dawn Butler.

The winner of the Labour leadership contest will be announced at a special event on April 4.

It suggested that Angela Rayner is the clear front runner in the race but that she would not win in the first round of vote counting.

The survey put her on 47 per cent, Richard Burgon on 19 per cent, Rosena Allin-Khan on 13 per cent, Dawn Butler on 12 per cent and Ian Murray on nine per cent.

The numbers suggested that Ms Rayner would win the contest in the second round of vote counting after the last finishing candidate is eliminated and their second preference votes are reallocated.