Are you sure you’re okay?! Man just released from coronavirus quarantine COUGHS his way through an interview and SHARES a water bottle with his three-year-old daughter

A U.S. citizen who was evacuated from Wuhan, the epicenter of the coronavirus outbreak in China, could not stop coughing as he gave a TV interview of his experience of going through the quarantine process.

Frank Wucinski and his three-year-old daughter Annabel were evacuated from Wuhan on February 4 and immediately placed in a 14-day quarantine in the MCAS Miramar military base in San Diego.

They were finally released on February 20. He gave a TV interview to Fox News on Friday but Wucinski appeared to be struggling with a cough that at times prevented him from speaking clearly.

He was forced to take a bottle of water from his daughter sitting on his lap but handed it straight back to her, despite mentioning how the deadly virus seemed to be contagious.

SCROLL DOWN FOR VIDEO 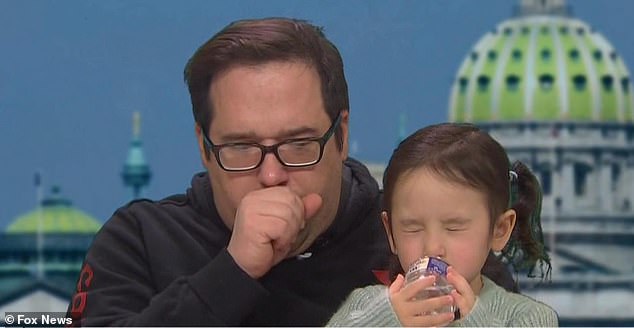 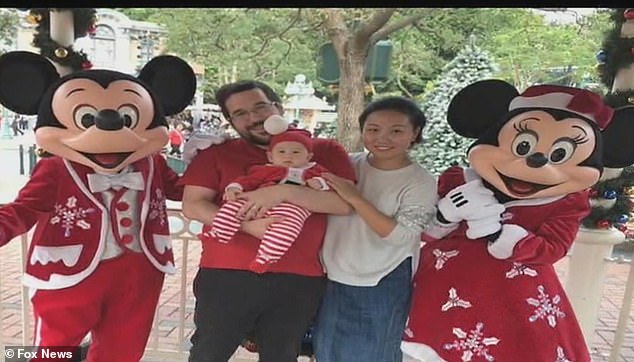 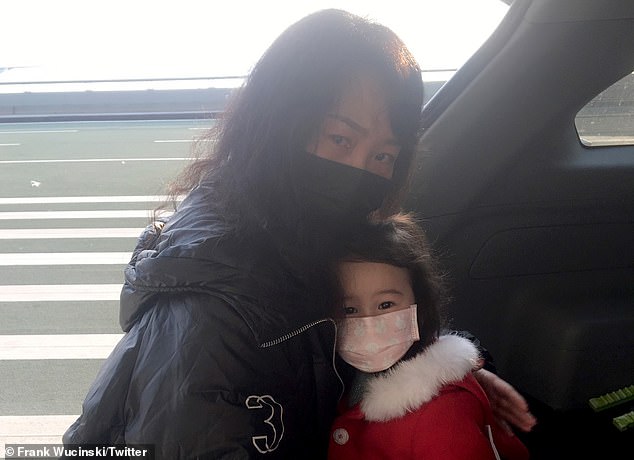 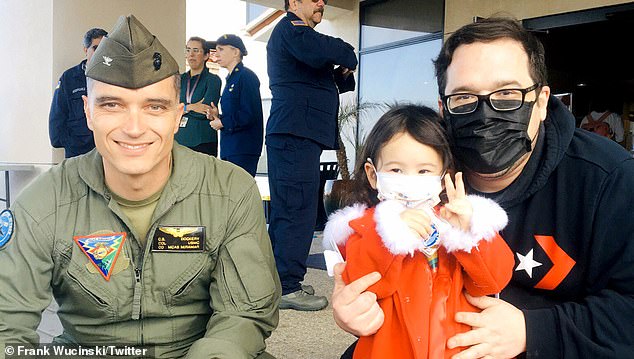 Wucinski racked his cough up to ‘nerves’ during his appearance on the weekday show ‘America’s Newsroom’.

His wife, who is not a U.S. citizen, is still stuck in Wuhan and now suffering with pneumonia which may be coronavirus related.

She had stayed in China to aid her father, who was hospitalized with the virus and passed away while Wucinski and Annabelle were in the California quarantine center.

The family has lived in China for the past 15 years. They have spent two-thirds of that time in Wuhan, where his wife’s family lives. 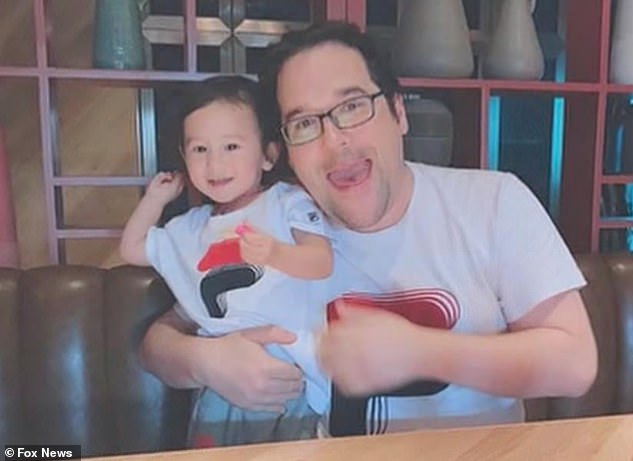 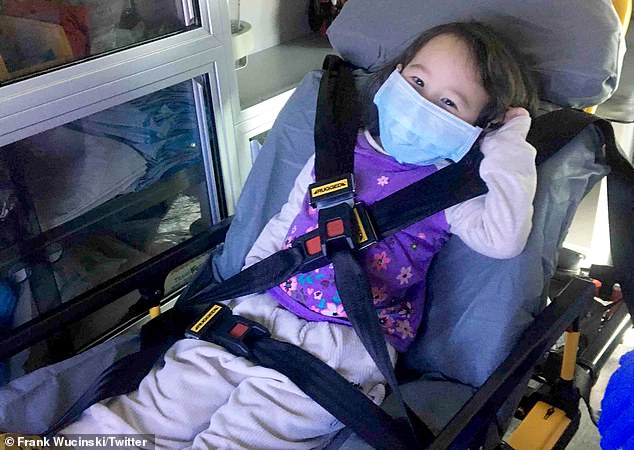 ‘I mean, I know just from my experience being in Wuhan when it all first started it was scary. You just didn’t know what was happening and what was going on,’ Wucinski told Fox News as he battled through stunted coughs.

‘I think as time goes forward, hopefully, doctors and scientists will get a better handle on the whole situation.

‘Fortunately, from what I understand, it is contagious, but the death rate is pretty low,’ he added.

As he clearly struggled to continue, Wucinski was forced to take the water bottle Annabel was eagerly drinking from in an attempt to regain his composure.

He continues to explain the cough away, reiterating that he was tested and cleared of the coronavirus and that his mystery cough had nothing to do with it.

‘They said I’m fine. I got tested twice, negative both times. The cough, probably just nerves,’ he added. 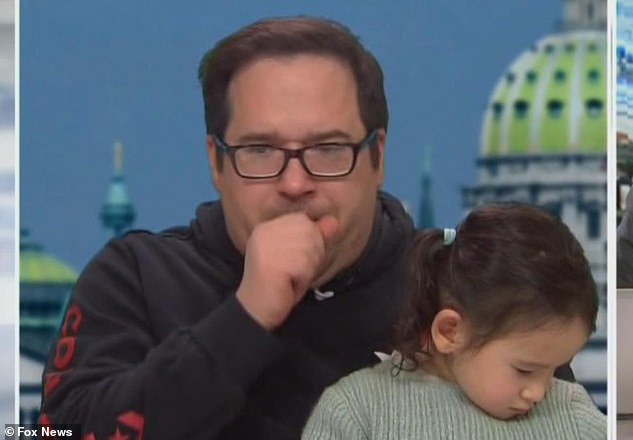 Frank Wucinski, freed from 14-day quarantine, coughed as he spoke about the coronavirus 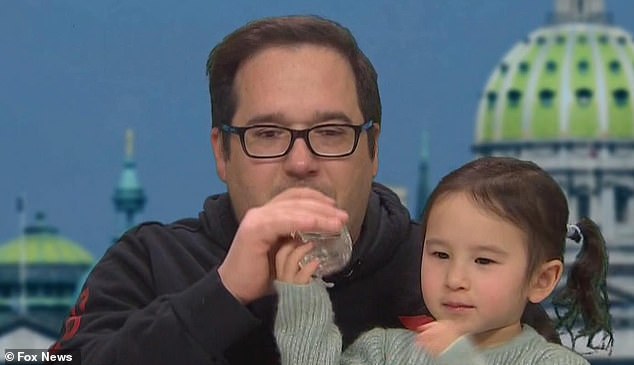 Wucinski and his daughter were immediately separated and isolated as soon as they reached MCAS Miramar military base as a result of their contact with Wucinski’s father-in-law who had the virus.

‘A few days later, Annabel just coughed in front of some staff,’ he told Fox News.

‘They suggested we go to the medical tent. The medical tent contacted the CDC and they said that we should go back to isolation at the children’s hospital. So, we stayed there for about three days.’

When her test came out negative they were moved to the base on February 14 to complete the remainder of their 14-day quarantine.

They were both released on February 20 after testing negative for the disease but now face large medical bills for their stay.

‘Well, we’re meant to go for follow-up checkups at the hospital or with a doctor, So, we’re looking into trying to get some insurance because my insurance for work doesn’t work in America. So, we’re applying,’ he told Fox.

‘Although I assumed all medical bills from our time in quarantine would be paid by the government, it turns out that I am financially responsible for the six days Annabel and I spent in isolation at the hospital,’ Wucinski explained on a GoFundMe page he has established for the family.

‘Secondly, since I do not know how long we will be in the United States, I am looking into getting health insurance for the two of us, since my insurance in China does not cover American doctors. While it looks like my daughter might be eligible for free healthcare, I am not.’ 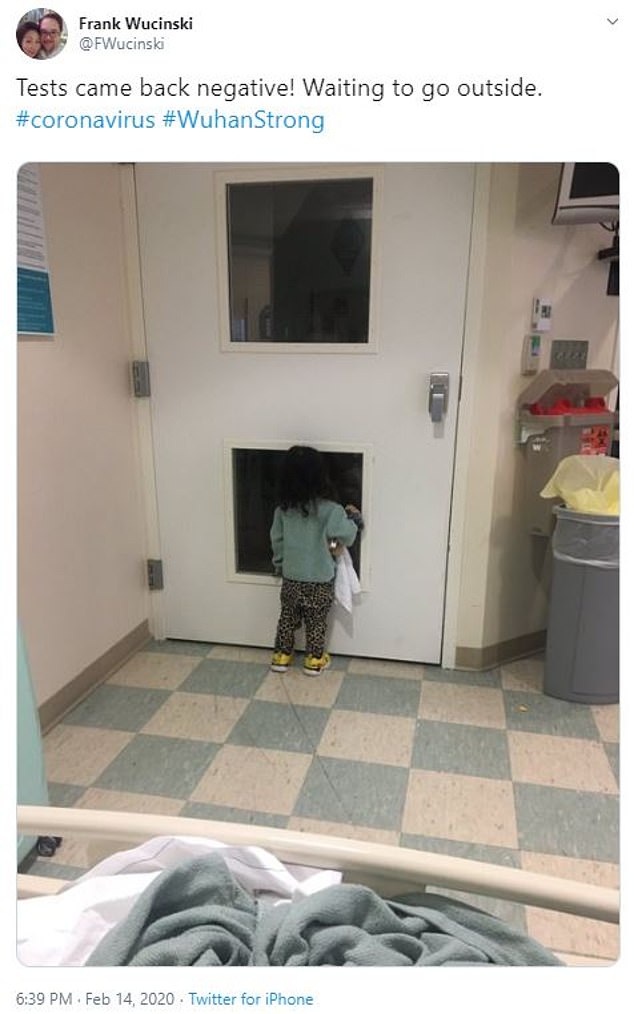 Frank Wucinski’s daughter Annabel coughed in front of medical staff and was brought to the local children’s hospital for isolation and further tests. She tested negative for the virus 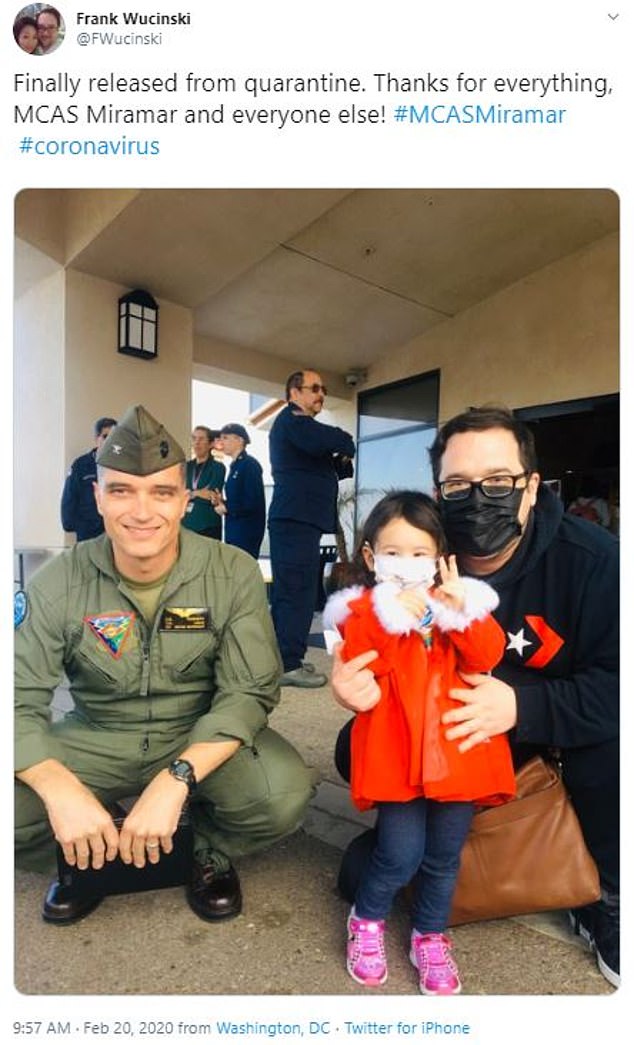 Frank Wucinski celebrates his release from quarantine with his daughter Annabel, aged 3 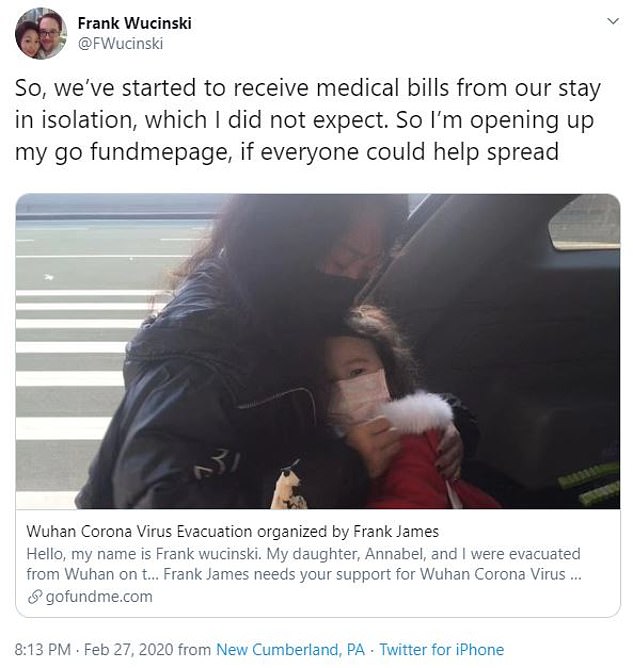 The coronavirus has reached more than 57 countries with more than 84,000 deaths and more than 2,800 deaths.

There are now 60 confirmed cases of the coronavirus in the U.S.

Experts admit they have no way of knowing the true figure because access to testing at present is severely limited.

The first U.S. case of coronavirus where the origin of the disease is unknown was confirmed on Wednesday.

The Centers for Disease Control and Prevention confirmed that the person, a resident in Northern California, had not recently returned from a foreign country, and had not been in contact with another confirmed case.

It later emerged that evening that the CDC had taken four days to test the woman, despite requests from medical staff, because ‘the patient did not fit the existing CDC criteria for COVID-19’.

As many as 100 healthcare workers may have been exposed to the woman in the four days that she went untested. The doctors and nurses are from the University of California Davis Medical Center, where the woman is being treated, and from NorthBay VacaValley Hospital. 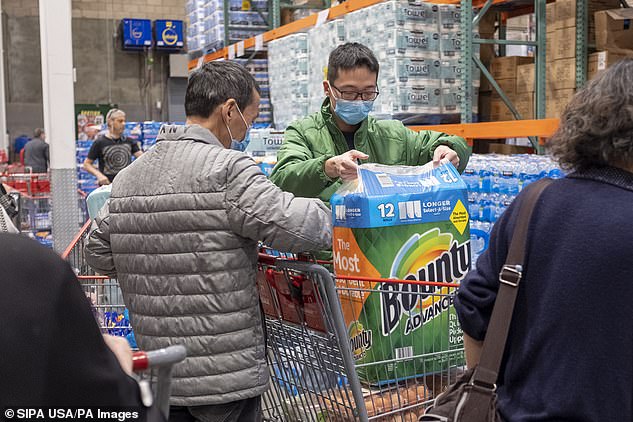 Shoppers wearing protective face masks buying toilet paper at a wholesale store in Mountain View, California, as people stock up on supplies due to increasing panic about the virus 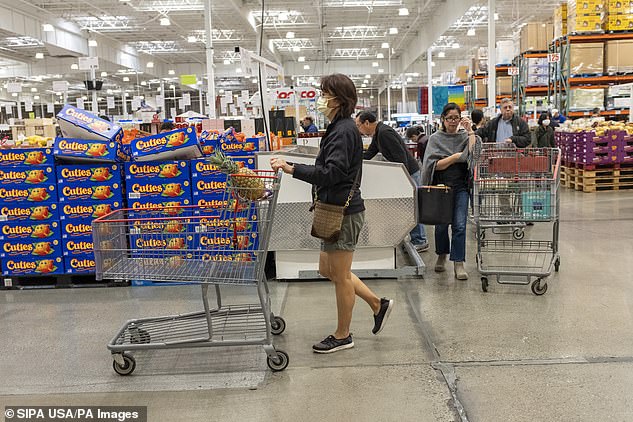 All of the 59 other cases in the U.S. have been for people who had traveled abroad or had close contact with others who traveled.

Earlier U.S. cases included 14 in people who returned from outbreak areas in China, or their spouses; three people who were evacuated from the central China city of Wuhan; and 42 American passengers on the Diamond Princess cruise ship.

So far, the U.S. strategy has focused almost exclusively on testing infected travelers, using a test that looks for genetic material from the virus in saliva or mucus. As of February 23, fewer than 500 people from 43 states had been or are being tested for the virus.

Currently, just seven state and local health departments have the ability to screen for the virus.

People have been panic buying items from stores ever since health authorities warned that Americans should start preparing for domestic acceleration of the virus, which has infected more than 80,000 people worldwide and killed nearly 3,000.

U.S. stock indexes fell sharply again at the open on Friday as the coronavirus outbreak raised the alarm for a possible global recession.

Investors have been left reeling after virus fears wiped nearly $3 trillion off the combined market value of S&P 500 companies this week, with the index confirming its fastest correction in history in volatile trading on Thursday.

The Dow Jones Industrial average lost 463 points, or 1.8 percent, at the opening bell on Friday, and losses quickly widened to as much as 1,000 points one day after the index’s biggest one-day point drop in history.

If the Dow closes down by more than 1,000 points on Friday, it would be the third time this week and the second day in a row the index lost points in the four digits, something that had previously only happened twice in history. 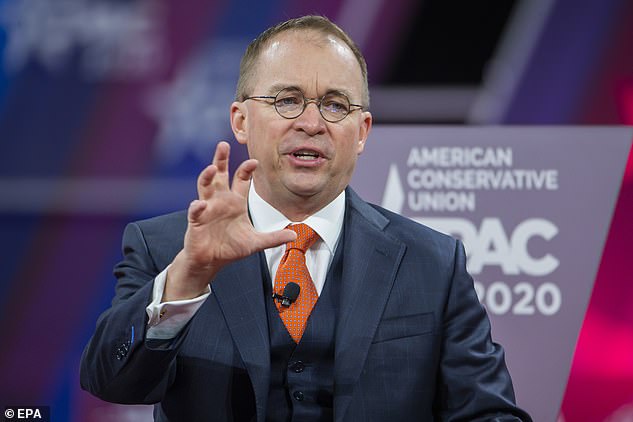 It comes after the U.S. Centers for Disease Control and Prevention this week for the first time advised American businesses, schools, hospitals and families to prepare for domestic acceleration of the virus, which has infected more than 80,000 people worldwide and killed nearly 3,000.

Schools across the United States are canceling trips abroad, preparing online lessons and even rethinking ‘perfect attendance’ awards as they brace for the possibility that the coronavirus could begin spreading in their communities.

On Friday, Acting Chief of Staff Mick Mulvaney confirmed that the coronavirus was likely to cause school closures across the U.S.

Mulvaney sought to reassure concerned Americans advising people ‘to turn their televisions off for 24 hours’.

‘Are you going to see some schools shut down? Probably. Maybe see impacts on public transportation? Sure, but we do this. We know how to handle this,’ he said at the Conservative Political Action Conference outside of Washington D.C.

President Donald Trump on Wednesday assured Americans that the risk of coronavirus transmission in the U.S. was ‘very low’ but he has been increasingly alarmed by the reaction of the U.S. stock market, which he considers a barometer of the economy’s health and sees as important to his re-election in November.

In tweets overnight, Trump said the coronavirus virus had spread ‘very slowly’ to the United States and defended his administration’s response so far.