It’s been more than 100 years, but this week one of Melbourne’s grandest landmarks will once again become the frontline to a pandemic.

The Royal Exhibition Building was a makeshift hospital for thousands of Melburnians who fell ill with the Spanish flu in 1919. Come Monday, a new phase will begin as people begin filing into its northern wing to receive their first coronavirus vaccination. 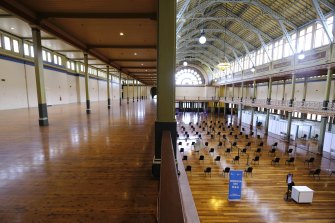 The Royal Exhibition Centre has been transformed into a mass vaccination clinic.Credit:Luis Enrique Ascui

Within two weeks, the 140-year-old building has been transformed into a mass vaccination clinic capable of processing more than 10,000 people a week, dependent on supplies and staff.

“At maximum capacity we will be able to do 2500 a day,” said St Vincent’s Hospital Melbourne deputy chief pharmacist Helen Dixon on Saturday afternoon.

She sits at what will soon become the arrival area at the new vaccination centre. Once used as a stage for bridal shows, it’s now set up with four reception desks and a snaking taped lines. 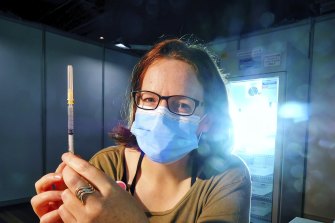 The cavernous space run by Museums Victoria has been devoid of events for a year, after the cancellation of the Virgin Australia Melbourne Fashion Festival last March.

But on Saturday, a quiet buzz of preparations had returned, as workers clip-clopped over polished wooden floorboards, putting the final touches on signs and wiring.

The night before, the first emails had gone out to emergency service workers including police and firefighters, inviting them to book into the clinic and another at the Melbourne Convention and Exhibition Centre.

Ms Dixon was excited to discover that 40 people had already booked in for Monday, from 80 available slots. A careful scaling up will see the clinic’s capacity increased to 400 a day by the end of the week, before being increased again.

“It’s a once in a lifetime opportunity to be involved in something as special as this,” Ms Dixon said. 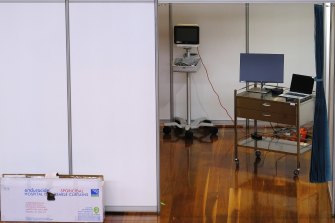 One of the vaccination cubicles at the Royal Exhibition Building.Credit:Luis Enrique Ascui

By later this year end, it’s hoped that the clinic will open to general members of the public, though this prospect and the clinic’s capacity to scale up to thousands a day will also be dependent on whether they are able to get enough doses of the vaccine and enough people to man the clinic.

St Vincent’s Hospital Melbourne was contacted by the Victorian government about running the centre about two weeks ago. The health service’s chief executive Angela Nolan said one of the biggest challenges had been recruiting 400 staff within the incredibly short timeframe.

With the hospital’s staff already in high demand, Ms Nolan said the new recruits included retired nurses experienced with vaccination and flight attendants who will act as concierge.

“Suffice to say my HR team are pretty exhausted at the moment,” she said. 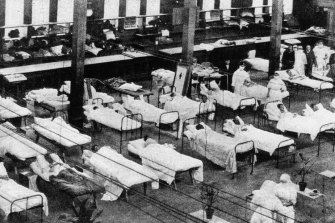 Hospital beds in the Royal Exhibition Building in Carlton during the influenza pandemic.Credit:Museums Victoria

Back in 1919, the building’s Great Hall was filled with iron-framed hospitals beds. Today, there are rows of black chairs, spaced apart. People will sit at the reception area until a bell rings and they are called into one of 40 white cubicles decked out with two black chairs, a desk and a black laptop.

Once the jab is complete, patients walk to an observation area in the western wing, where more rows of black chairs wait under cathedral-like ceilings. 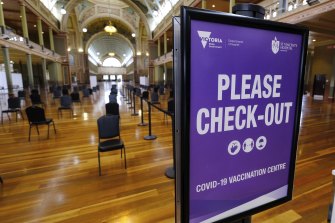 The grandness of the space helps prevent any infection spreading, but it’s also hoped that it will provide another benefit to patients.

“It’s so beautiful,” Ms Nolan said. “There’s a calmness and peace for the building which is ideal for what we are trying to achieve.”

Get our Coronavirus Update newsletter

Stay across the news you need to know related to the pandemic. Sent Monday and Thursday. Sign up here.