Ban these death trap e-scooters: Mother’s anguished plea as she mourns her son, 20, who last week became the latest victim of the silent scourge racing through Britain’s towns

The mother of an e-scooter rider killed in a road accident has paid a moving tribute to her son – and pledged to honour his memory by campaigning for the vehicles to be banned.

Shakur Pinnock, known to family and friends as Shak, died six days after suffering horrendous injuries in the crash.

The 20-year-old was left with a fractured skull, two severed arteries, punctured lungs and a broken jaw after colliding with a car on June 12.

His girlfriend, Chanté Hoosang, who was travelling on the back of the scooter, was badly hurt.

Shortly before Shakur’s life support was turned off, Chanté was pictured holding his hand from her adjacent hospital bed in an almost unbearably poignant photograph. 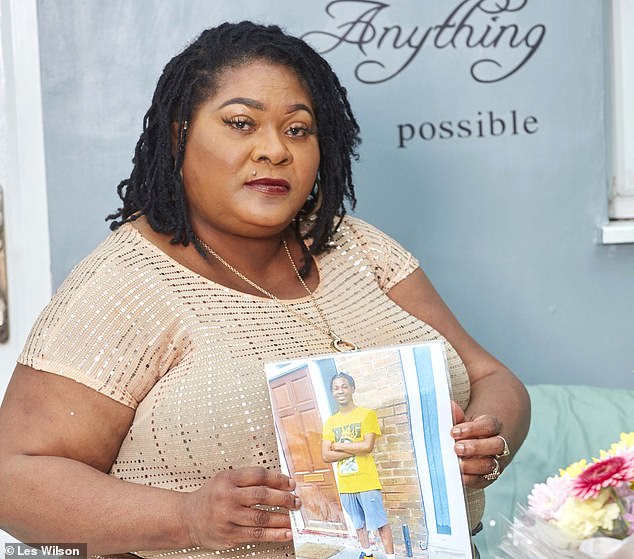 Celine Fraser-Pinnock is pictured with a picture of son Shakur. She pledged to honour his memory by campaigning for the vehicles to be banned

Yesterday, his mum Celine Fraser-Pinnock told of her plans to press for the scooters to be banned under a campaign to introduce what she has named ‘Shak’s Law’.

Speaking to The Mail on Sunday, she said: ‘Shak’s life can prevent many others from losing theirs. He may have passed, but through Shak’s Law we can save a lot of other people.

‘I want this law to happen right now because every day matters, every extra day something else could happen. I don’t want anybody else to go through what I’m going through.’

Describing how she feels ‘lost’ without her ‘loving, caring, beautiful and childlike’ son, the mother of four said: ‘I want to do something positive, because a life is a life and you can’t get that back – I have to be brave, he hasn’t got a voice any more so I have to be that voice for him.

‘I would tell Boris Johnson how important it is to put this in place now to save lives, because every day counts, every second counts.

‘I didn’t want them to be banned. But I went out in the street earlier and saw how many kids are riding round on them, and now I know they definitely need to be banned.’

The crash happened in broad daylight when Shakur collided with a Volkswagen Golf in Wolverhampton. Despite more than eight hours’ surgery in an attempt to save his life, doctors told his family two days after the accident that he would not survive.

We first made contact when Shakur got in touch with me through Instagram. But it was a chance meeting in a club on New Year’s Eve, 2018, that would change my life for ever. Shak and I instantly clicked.

He was different. He had confidence, style, and he made me laugh so much. But it was his unforgettable smile I remember most – a smile that was like no other I’d ever seen. It just lit up a room.

I’ll always cherish that first meeting. We laughed and danced the night away and for the first time in a long while I was finally looking forward to a New Year. I was so excited. I was happy.

Shak came into my life at a time when nothing much mattered to me, not even myself, and he changed that. He was my strength, my everything, and he always encouraged me to live my best life. He made me feel so safe and secure, so loved and so special.

I knew in my heart very quickly that I really had met the person that I was meant to be with for the rest of my life. He loved life and finally I was loving life, too. His kind and caring nature was infectious. He was a keeper, my soulmate and my best friend. 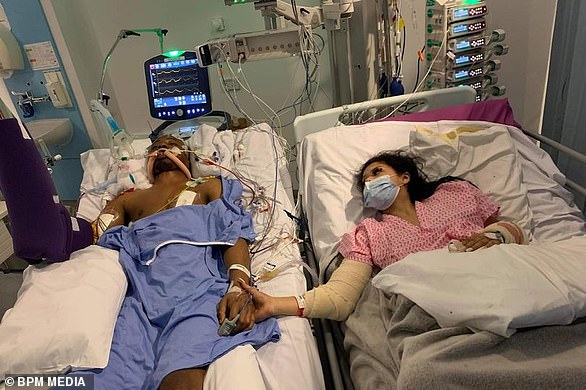 We have been through so much together and he was always there – no matter what time of the day or night – to support me. He made everything okay like no one else could. He would turn up with a bunch of flowers and a Toblerone, look at me, wrap his arms around me with his unique hug and bless me with his loving smile.

And in that moment I would always believe everything was going to be just fine.

We had our moments when we didn’t get along, but we always knew our love for each other was true and that we wanted to be together for ever. Now that Shak’s gone, I feel like I have lost a part of me, a part that will never be replaced.

Shakur Amoy Pinnock, I will cherish every memory of you. I will always and for ever miss you, but will hold you in my dreams and in my heart. My heart has gone with you. Rest easy baby, I love you more than words can say.

Ms Fraser-Pinnock, a 56-year-old bank worker, said: ‘You feel hopeless . . . you gave birth to them and you’ve taken care of them, but there is absolutely nothing you can do.’

To other mothers, she said: ‘You have to be sure they have at least got a helmet on – until Shak’s Law is put in place, we have to be on top of it because it’s our children.’

Privately-owned e-scooters are banned on public roads and footpaths, although trials of rental e-scooters are taking place in more than 40 areas of the UK. Police can issue fines and seize e-scooters if people are caught breaking the law, but this is often unknown by riders and is not enforced uniformly.

Pending the introduction of any changes to the law, the family want greater clarity on the existing legal situation as they – like many others – had been unaware that privately owned e-scooters are banned from public roads. They are also demanding tough interim measures including the mandatory wearing of helmets, compulsory driving tests and age restrictions limiting the use of e-scooters to over-18s only.

In addition they want regular hazard perception tests for motorists.

Shakur’s older brother, Hamadi Campbell, said: ‘I would like the law to be more specific because we didn’t even realise that having a privately owned e-scooter in public is against the law. 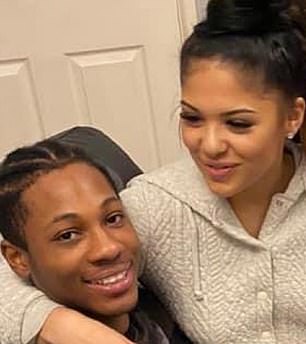 Shakur Pinnock and Chanté Hoosang are pictured above

‘If they’re against the law, then how are they so easily sold? Amazon sells them, Argos sells them, how can this be allowed?’

Mr Campbell, 31, a fitness instructor, described Shakur as the ‘perfect little brother’, adding: ‘Anything you could think of a little brother as, annoying, cute, funny, he embodied it all. I’m happy to have had him for 20 years.’

Expressing support for his mother’s campaign, Mr Campbell said: ‘If it can prevent another family having to go through this then it’s worth it.’

Older sister Bryana, 22, described her brother as ‘confident and boisterous’. The pair were ‘like yin and yang, balancing each other out’.

She said: ‘We all want something positive to come out of this, I want a bench near where me and Shak used to spend time, and my mum wants Shak’s Law, and we will all support her.’

Miss Hoosang, 19, underwent three rounds of surgery after suffering a ruptured spleen and broken knee in the crash.

The couple who had been dating for three years, had recently worked together at the Bentley car plant in Crewe. They hoped to get married and start a business together. She is still in hospital.

Since Shakur’s death, the Pinnock household has been flooded with flowers, cards and a constant stream of family and friends paying their respects.

The family will celebrate Shakur’s life today with a Nine-Nights gathering – traditionally held in many Caribbean countries nine nights after the death of a loved one.