I’m a carpenter who lost all my belongings when the Tweed River flooded the Chinderah caravan park where I was living on February 28. I’ve always been a Liberal supporter, but I’m reassessing that since I found out the federal government was only going to give $2000 to flood victims in Lismore, which is in the Nationals seat of Page, but not to people like me, who live in the neighbouring electorate of Richmond, held by Labor.

It was doing my head in, trying to work out why Lismore was getting funding and other areas up here weren’t, given we’ve all gone through exactly the same thing. I was talking to a mate at work and he thought maybe it was because there were more businesses in Lismore. I thought maybe it was because the houses in Lismore were holding water for longer. 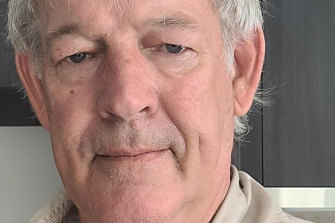 Once a Liberal voter, now not so sure: the initial denial of the $2000 federal flood relief payment to people in his Labor-held seat is making Peter Pollock reassess how he will vote.

But the damage is just as bad up here, with houses sitting in water for days. NSW Liberal MLA Catherine Cusack was right to be outraged about the Liberals’ decision to support one flood-affected area but not another, and to say she would resign in protest. It made me change my mind about the Liberal Party, too.

The Liberals clearly read the room. They decided on Thursday afternoon to extend the support payment to those of us who live in Richmond, after all. And I’ll definitely put it to good use. I’m on a low wage, paying off a ute, and $2000 will help me to buy new furniture, or pay the bond for a new place to live.

I used a $1000 payment from the state government to buy a new computer, because without one I couldn’t even apply for a new rental place. I lost all my contents, all my whitegoods and furniture, but the biggest thing I’m upset about is that I have got nowhere to live.

There was a shortage of accommodation here before the flood, and now it’s even harder. Tradesmen like me were already sought after. Now we especially need to be kept in the area, to fix all the flood-affected houses. After a flood you get wood rot, dry rot, mould. All the kitchens and the flooring have to be pulled out. But to stay here, we need housing. And we need any extra cash to put down bonds.

A lot of people are in a much worse situation than me. Some of my neighbours who own permanent vans in my caravan park are moving back into them – and living with the mould. The company I work for is putting me up in its display home, in the granny flat, until I can find something else. It’s doing everything possible to help me.

I was here for the Cyclone Debbie flood too in 2017, although the water didn’t reach the place where I was living back then. If I’d still been living there during this flood, I would have been swinging from a tree.

This one came in the late afternoon. We got the evacuation order from the park manager and were just thinking about getting our cars out when, the next minute, it pelted down and the water came up really fast. I heard a guy saying four-wheel drives were getting out, so I took his word for it and jumped in my ute and drove out. At that point, there was no government assistance. There were just the local surf lifesaving clubs, some firefighters, and anyone who had a boat, going in and rescuing people. 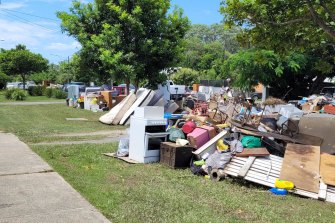 The devastation left by the flood at the Chinderah caravan park where Peter Pollock had been living.

I drove to the evacuation centre at the TAFE college and there were a lot of people there, a lot of elderly people who were being pulled out of the flood, and I realised there weren’t going to be enough beds for everyone, so I didn’t stay. I went to one of the building sites I was working on. I had a drop sheet there and another drop sheet in my ute, and I just laid them out and slept there on the concrete that night.

I have always been a conservative voter, right-wing. I’ve never been a real Greeny supporter and I think Labor and the Greens stick together, but I’m changing my tune towards all of that, with the number of weather events we have had. I can see where the Greens are coming from on climate change.

I don’t think Prime Minister Scott Morrison can be blamed for everything that has been going on in this country, with the floods and the economy and coronavirus. He’s had a lot to deal with. But it’s pretty poor, pretty ordinary, what the government did, to support one area over another.

I’m glad they pulled their head out of the sand on this. They were obviously put under pressure to reassess it. But the whole episode has made me think about who I’ll vote for in the next election.

As told to Catherine Naylor. Peter Pollock is a Chinderah carpenter.