NSW reported 1043 new local coronavirus cases on Friday, as well as the deaths of 11 people from the virus.

The deaths included a man in his 50s from Broken Hill, in the state’s west. He died at Broken Hill Base Hospital, was a close contact of a confirmed COVID-19 case and was not vaccinated. NSW Health said in a statement that the man had underlying medical conditions. 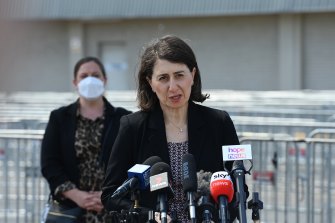 NSW Premier Gladys Berejiklian during her COVID-19 update at the Glenquarie Town Centre in Macquarie Fields on Friday.Credit:Kate Geraghty

Two other people died at home in Sydney and tested positive to COVID-19 after their death: an unvaccinated woman in her 80s from Sydney’s inner west who acquired her infection at her social housing complex and an unvaccinated man in his 40s from western Sydney who had underlying medical conditions.

Speaking at the Glenquarie mass vaccination centre in south-west Sydney, NSW Premier Gladys Berejiklian said 56.6 per cent of people aged 16 and over in the state had now been fully vaccinated against the virus.

“So [the state is] inching closer and closer to that 70 per cent figure,” she said. The Premier said she was also “pleased to announce” a third of children aged 12 to 15 had now received their first dose of a COVID-19 vaccine – meaning one in 20 kids in the age group received a vaccine on Thursday.

Despite the reopening of businesses such as dine-in restaurants and gyms projected to occur in less than a month, the Premier said she was hesitant to use the term “Freedom Day” due to the ongoing risk of the virus.

“Everything we start doing, we look forward to doing, at 70 and 80 per cent must be done with a degree of caution and responsibility because otherwise too many people will end up in hospital,” she said.

All staff and students were asked to self-isolate and follow the NSW Health guidelines after COVID-19 cases were reported in the school communities.

“NSW Education will continue to work closely with NSW Health to ensure the health and safety of all students and staff is maintained,” the spokesperson said.

Meanwhile, a number of venues in regional NSW have been added to the state’s exposure sites list.

Sites in 25 regional locations – including Dubbo, Cowra, Shellharbour and Broken Hill – were named as casual contact venues, meaning people who visited must get tested and isolate until receiving a negative result.

Concerns have been growing about the possibility of an outbreak in the Northern Rivers region, where vaccination rates are low and three councils re-entered lockdown earlier this week after a television crew member visited several locations before testing positive.

Ahead of plans to reopen regional tourism when NSW hits 70 per cent full vaccination coverage in people aged 16 and over, Nationals, Labor and Greens MPs from the state’s north coast have called for non-essential travel to northern NSW to be restricted until the region also hits 70 per cent coverage.

There were 733 new local coronavirus cases and one death from the virus reported in Victoria on Friday.