There have been more than 90 shootings along Chicago-area expressway systems so far this year, and over 220 shootings on such roadways since the start of 2020, Fox News has confirmed.

Local CBS Chicago was first to report the startling statistics, noting that the figures show there are, on average, over 10 expressway shootings per month. Meanwhile, just three arrests have been made in the 221 shootings reported since the start of 2020, according to the report.

Chicago, like many cities nationwide, is grappling with patterns of increased gun violence, including drive-by shootings or those involving children.

The Chicago Police Department said Monday that 55 people were wounded in 41 shootings citywide from 6 p.m. Friday through Sunday. Five people were murdered. 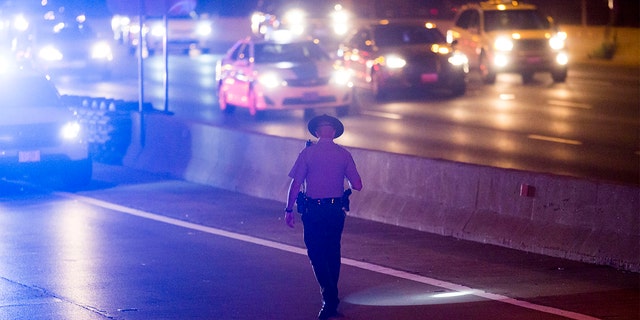 A member of the Illinois State Police looks for evidence on the Eisenhower Expressway where two people were wounded in a shooting Saturday, Aug. 13, 2016, in Chicago. (Armando L. Sanchez/Chicago Tribune/Tribune News Service via Getty Images)
(Getty Images)

One of those victims, an 11-year-old girl, was struck once in the lower back during a drive-by shooting around 9 p.m. on Sunday, police said. Witnesses told officers “they saw an unidentified occupant fire several shots from a red vehicle,” police said.

The Chicago Sun-Times recently analyzed this year’s crime statistics and found that the rate at which children are being fatally shot is three times higher than it was during the same period in 2020.

Gun violence has claimed the lives of 10 kids, age 15 and under, so far in 2021, compared to the three reported year-over-year, the outlet reported, citing its crime records. This year’s shooting statistics show more children have already been mortally wounded than in 2019 as a whole, according to the Sun-Times.

Nonetheless, Police Superintendent David Brown told reporters Monday that homicides are up 5% this year compared with this time last year and shootings are up 17%. But he insisted that violent crime is “trending in a downward direction” in “fits and starts.”

Chicago saw a drop in homicides in May compared with the same month last year and it ended with fewer killings than any Memorial Day weekend in a decade.