That’s the way the cookie crumbles! Peckish seagull swoops in and steals little boy’s biscuit as he holds it up for a photo

This is the hilarious moment a seagull snatched a cookie from a boy on a beach a he posed for a photo.

The bird can be seen swooping as the youngster holds the snack over his head at an unknown location.

Wearing pink swim shorts, the toddler smiles as he poses for the camera at the seaside.

He doesn’t see birds lurking in the background just inches away from his feet in the sand.

With the snack in sight, they squat patiently behind the child as he stands proudly with the cookie. 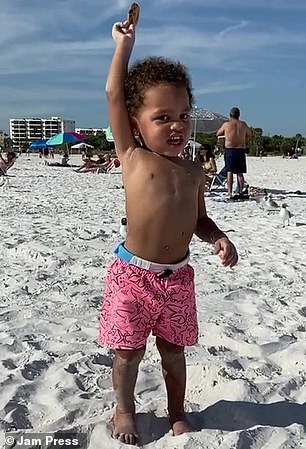 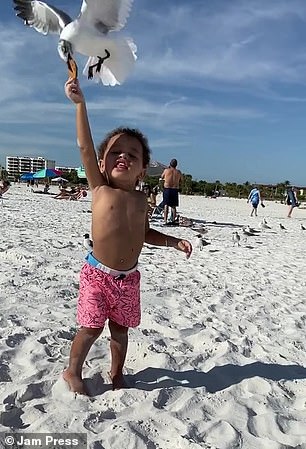 The boy can be seen, left, holding the cookie over his head and, right, the bird swoops down to snatch the snack

The cheeky seagull then launches at him from the sand, before dropping down to pinch the biscuit.

Clearly rattled, the child scurries away in shock as the bird makes off with his food and flies away.

His parents can be heard chuckling as the boy looks on in a state of surprise in the TikTok clip.

Several other birds chase off after the cookie, flapping past the frightened youngster.