London: Piers Morgan has left his top-rating British morning television show a day after the broadcaster’s fierce criticism of Meghan, the Duchess of Sussex prompted tens of thousands complaints to the media regulator.

British media regulator Ofcom announced on Tuesday it was formally investigating Good Morning Britain over a fiery episode on Monday which covered the fallout from Prince Harry and Meghan’s interview with Oprah Winfrey. 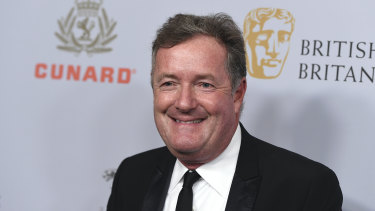 Piers Morgan will leave Good Morning Britain but his name has been linked to two new channels launching later this year.Credit:

Ofcom announced at 5pm that it would probe the episode under its harm and offence rules. The regulator said it had received more than 41,000 complaints about the program.

“ITV has accepted this decision and has nothing further to add.”

Morgan, 55, is one of Britain’s most prominent media figures after a long career editing top-selling newspapers The Daily Mirror and now defunct News of the World. He later switched to US television and was CNN’s replacement for the retiring Larry King.

He joined Good Morning Britain in 2015. The show’s rating have surged over the past year amid Morgan’s forensic interrogation of the government’s poor handling of the coronavirus pandemic.

In Tuesday’s episode, Beresford said he had experienced racism in Britain and had sympathy for Meghan’s experience.

“I understand that you don’t like Meghan Markle,” Beresford said.

“You’ve made it so clear a number of times on this program, and I understand that you had a personal relationship with Meghan Markle and she cut you off. Has she said anything about you after she cut you off? She’s entitled to cut you off if she wants to. And yet you continue to trash her.”

Morgan then stood up and walked off the set.

As Morgan left, Beresford said: “That’s pathetic. This is absolutely diabolical behaviour. I’m sorry, but Piers spouts off on a regular basis and we all have to sit there and listen – 6.30am to 7am yesterday was incredibly hard to watch.”

Morgan on Tuesday said it was not for him to question whether Meghan felt suicidal.

“My real concern was a disbelief, frankly…that she went to a senior member of the royal household, told them she was suicidal and was told she could not have any help because it would be a bad look for the family.”

“If that is true, a) that person if they are still there should be fired and b) the royal family has serious questions to answer about how they handled it.”

There had been some speculation prior to Morgan’s departure from Good Morning Britain on Tuesday that he was already considering other options.

His name has been linked to GB News, a new television channel being launched later this year by former Sky News Australia chief Angelos Frangopoulos. It has also been connected to a new network also to be launched by Rupert Murdoch.

ITV chief executive officer Carolyn McCall was peppered by questions about Morgan during an event on Tuesday. She said director of television Kevin Lygo had spoken with the broadcaster over recent days.

“We are very committed to that.”

“When every single person on your TV screens is identikit, dull as dishwater, toeing the line, sprouting the same woke nonsense to keep the Twitter cancel culture ghouls happy all day every day, you’ll all be bored out of your bloody minds,” she said.

“Be careful what you wish for.”