A massive manhunt is underway in central India after a gang of robbers stole nearly a tonne of cow dung from a village, police said.

Locals from Dhurena village in the central state of Chhattisgarh complained to police last week after more than 800kg (1,770lbs) of cow poo disappeared from their storehouse.

Police said the gang struck at night, breaking into the depository in Dhurena in the Korba district and fleeing with their pungent plunder estimated to be worth some 1,600 rupees (£15). 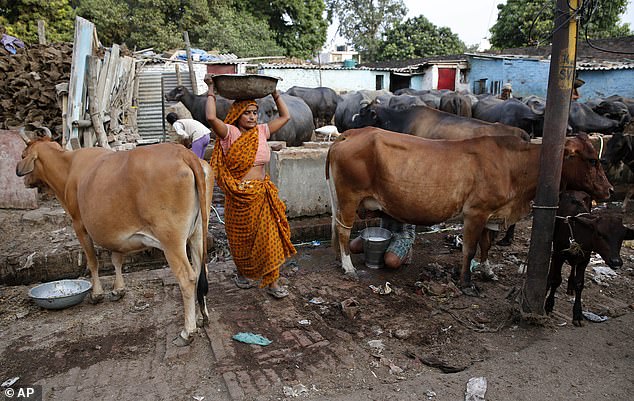 A massive manhunt is underway in central India after a gang of robbers stole nearly a tonne of cow dung from a village, police said. (File image of a woman clearing cow dung in Allahabad, India)

‘We have questioned some suspects but no arrests have been made yet,’ local police officer Harish Tandekar said on Wednesday.

He added that it was not clear how the suspects had been able to transport such a large amount of faeces, or why they had stolen it.

‘Investigations are continuing and every effort is being made to find the culprits,’ Tandekar said.

Chhattisgarh buys bovine dung from dairy farmers at 200 rupees per 100 kilogrammes under a state scheme to produce vermi-compost.

In recent years, many Indian states have been encouraging farmers to sell cow poo for organic farming. 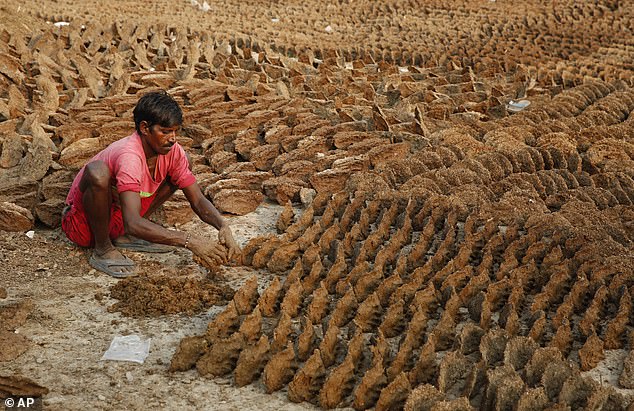 An Indian villager makes cow dung cakes which will be sold to devotees to be used as fuel for clay stoves in Allahabad, India, in 2017 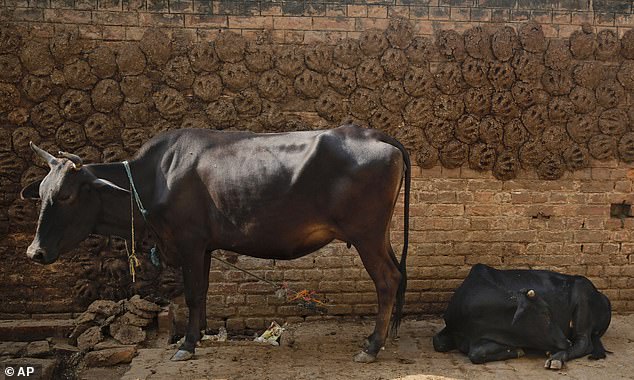 Cow dung cakes are also made by mixing fresh cow faeces with hay and then dried in the sun or on walls (pictured). They have long been used in India’s farming communities to fuel fires

There has also been an increased demand for cattle waste for eco-friendly products such as earthen lamps and for religious purposes.

Cow dung cakes are also made by mixing fresh cow faeces with hay and then dried in the sun. They have long been used in India’s farming communities to fuel fires.

Some Hindus consider cows sacred and use the animals’ dung and urine for medicines and other holy practices.

In May, it emerged that Hindus in western Gujarat state have been visiting cow shelters once a week to douse themselves in excrement, which is then washed off with milk. 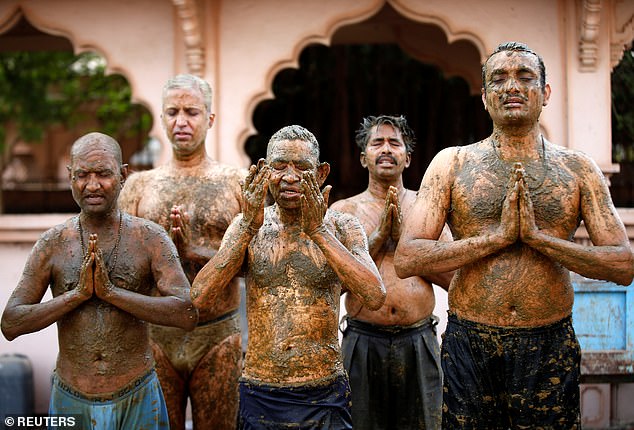 People cover themselves in a mixture of cow dung and urine at a Hindu school in Gujarat state, India, believing it is an alternative cure for Covid 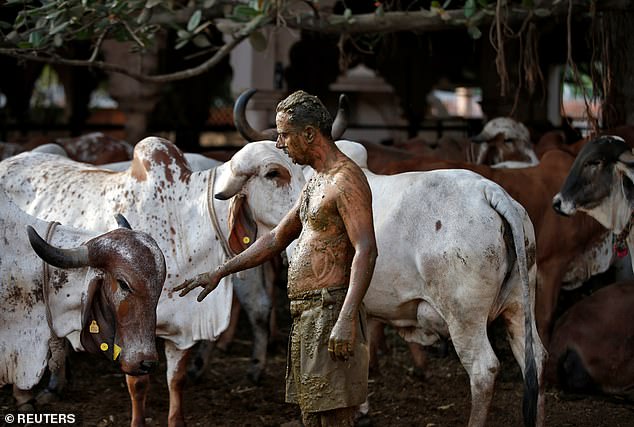 While waiting for the dung packs to dry, devotees hug the cows or perform yoga – believing it will further boost their immunity

They believe feces from a cow – a holy animal to Hindus – will boost their immune systems, helping to both prevent and cure Covid.

But Dr JA Jayalal, president of the Indian Medical Association, warned the ‘cure’ doesn’t work and may actually help to spread the virus as often sick people gather in groups to undergo the treatment.

The visitors to the shelter use both cow dung and urine – which has been used in Hindu rituals for centuries for its supposed therapeutic and antiseptic properties – and then cover their bodies in the mixture.

As participants wait for the dung and urine mixture on their bodies to dry, they hug or honour the cows at the shelter, and practice yoga to boost energy levels.

The packs are then washed off with milk or buttermilk.

The government is looking to encourage the production of toothpaste, shampoos and mosquito repellents from cow dung and urine.