The executive order, which the Russian space agency Roscosmos said damaged the scope for international cooperation in space, was signed on Monday.

The order said the US would seek to negotiate ‘joint statements and bilateral and multilateral arrangements with foreign states regarding safe and sustainable operations for the public and private recovery and use of space resources’.

It added US citizens should have the right to engage in such activity and that ‘outer space is a legally and physically unique domain of human activity, and the United States does not view it as a global commons’. 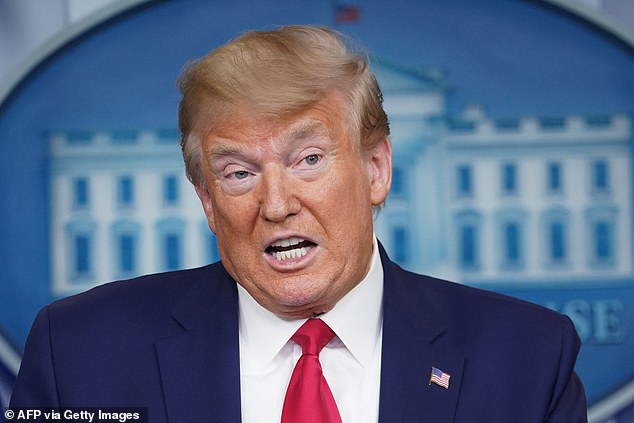 US President Donald Trump speaks during the daily briefing on the novel coronavirus, COVID-19, at the White House yesterday in Washington, DC. Russia has accused Trump of damaging the scope for international co-operation in space with an executive order regarding the mining of space resources 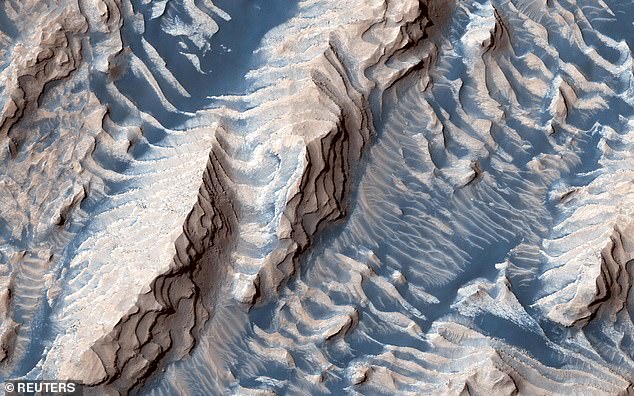 Sedimentary rock and sand, formed over millions or billions of years as loose sediment, cemented into place before being eroded by winds into a zebra stripe-like pattern, are seen within Danielson Crater on Mars on September 19, 2019

Roscosmos said the order put the United States at odds with the notion of space belonging to all humanity.

‘Attempts to expropriate outer space and aggressive plans to actually seize territories of other planets hardly set the countries (on course for) fruitful cooperation,’ the agency’s statement said.

Russia, a leading producer of natural resources, first announced its plans to join Luxembourg in mining for minerals in outer space at the beginning of March last year.

Space mining has been the realm of science fiction, but a handful of firms and governments are pursuing the idea of making it a reality. The small Duchy of Luxembourg became the first country to adopt legal regulations relating to mining in space, including from asteroids. 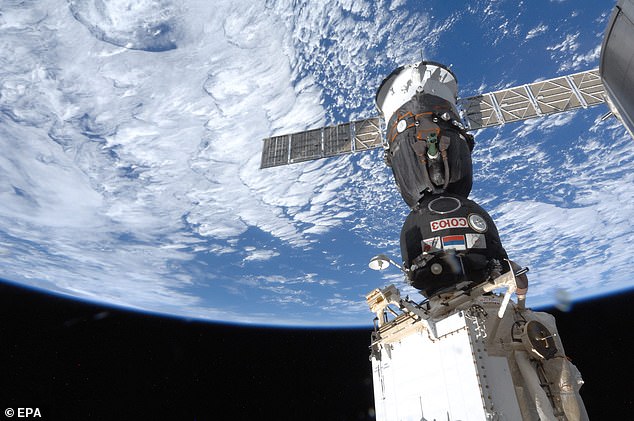 A handout image provided by Roscosmos (Russian Federal Space Agency) on 15 August 2012 shows a picture taken from on board of the International Space Station (ISS) by Russian cosmonaut Gennady Padalka of a Soyuz spacecraft docked at the ISS on 27 July, 2012

‘In January we offered Luxembourg a framework agreement on cooperation in the use of (mining) exploration in space. We expect an answer from Luxembourg,’ said Russian Deputy Prime Minister Tatyana Golikova, part of a Russian delegation headed by Prime Minister Dmitry Medvedev.

Commercial mining on other planets or asteroids is still a distant prospect, hampered, among other things, by the technical challenges of how to get large quantities of mined minerals back to Earth.

The focus of entrepreneurs pursuing space mining is instead on using space minerals to create interplanetary ‘gas stations’ that will build, support and fuel colonies on Mars.

Metals such as iron, cobalt and nickel are abundant in asteroids and critical components of space vehicles. Platinum group metals, also abundant, can be used for internal circuitry and electronics.

Space law is dominated by the 1967 Outer Space Treaty, written and ratified at the time of the Cold War and therefore heavy on the prohibition of weapons of mass destruction in space, on the Moon or any other celestial body.

The treaty explicitly forbids any government from claiming a celestial resource such as the Moon or a planet on the basis that they are ‘the common heritage of mankind.’

Luxembourg has said it is ‘eager to work with other countries’ on a multilateral agreement on asteroid rights, but the prospect of several countries passing their own legislation raises the specter of space mining becoming a new wild west land grab.

Tensions between Russia and the United States are at a post-Cold War high, but cooperation on space has continued despite an array of differences over everything from Ukraine to accusations of election meddling.