Ryanair’s carbon cop-out: Passengers paid to ‘offset’ emissions and fill this field with trees – but the airline pulled the plug on the scheme after critics branded it a ‘green gimmick’

Ryanair has dropped two ‘carbon offset’ projects funded by passengers after claims they do little or nothing to reduce total emissions.

The budget airline has dumped one tree-planting scheme before a single sapling was planted and pulled funding from a whale-watching project.

Critics said the schemes were ‘woefully inadequate’ at cancelling out the massive amount of greenhouse gas the airline produces each year.

Ryanair has said it will instead invest in ‘certified’ carbon offsetting projects which offer a ‘verification’ stamp allowing companies to claim their carbon is being offset. 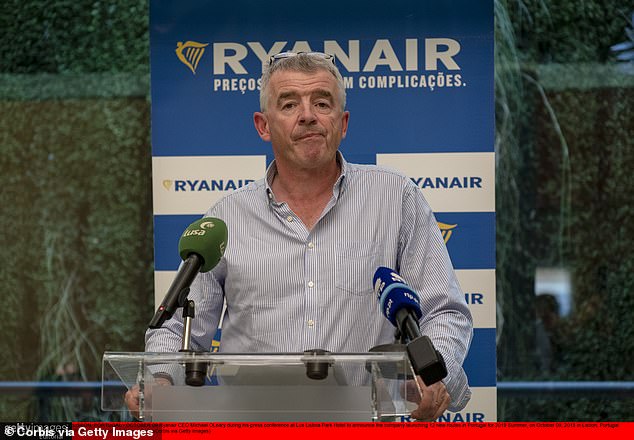 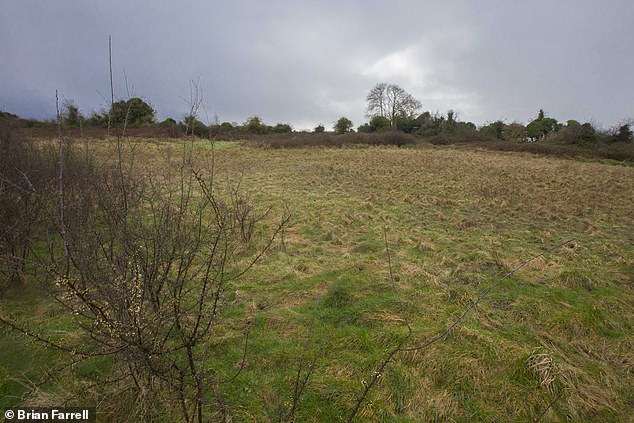 One of Ryanair’s pledges was to re-forest 7.5hectares of woodland in Ireland (pictured) but it was then claimed that this would offset less than 0.01 per cent of 2019 emissions

But the move has devastated the small organisations, which were expecting major funding from the £2.1million Ryanair has gathered in passenger donations.

Airlines are scrambling to meet strict global guidelines requiring them to drastically reduce their carbon footprint.

Ryanair, which carries 142million passengers a year, is Europe’s ninth-worst polluter and emitted 9.9megatonnes of CO2 in 2018, according to the European Commission. The airline insists it is the ‘greenest, cleanest major airline’ on the continent.

But one pledge to re-forest 7.5hectares of woodland in Ireland was dumped following claims it would offset less than 0.01 per cent of Ryanair’s 2019 emissions.

A dolphin and whale counting scheme in the Atlantic has also been dropped, with charity bosses admitting it does not contribute significantly to CO2 reduction. 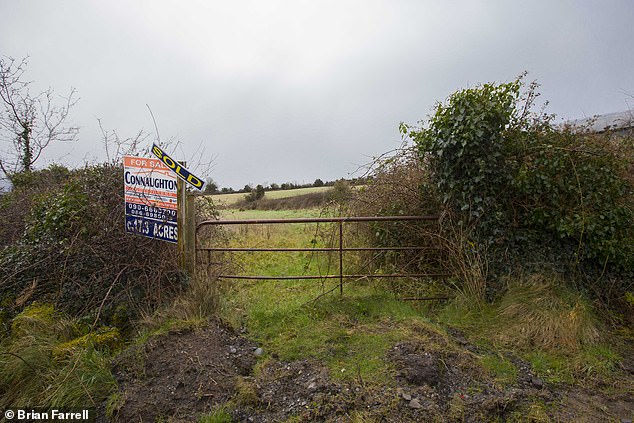 The Native Woodland Trust said it had sent Ryanair an invoice of £13,000 for ‘wasted’ work on the project which had intended to plant 20,000 oak trees on a patch of neglected land in Co Roscommon, Ireland  (pictured) 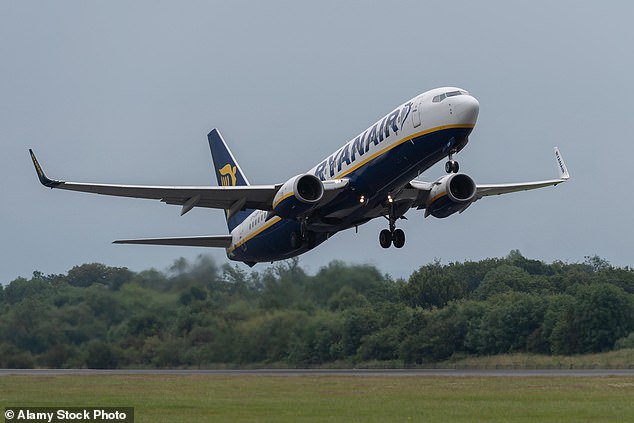 Ryanair’s decision to end the two contracts, worth £172,000, comes after an investigation cast doubt on the effectiveness of the schemes at offsetting Ryanair’s emissions (file picture)

The other projects, a reforestation scheme to plant 75,000 trees on the Algarve in Portugal and a project to provide fuel-efficient cooking stoves to families in Uganda, are still underway.

Gilles Dufrasne at the Carbon Market Watch think-tank said: ‘Many of the offsetting commitments by big polluters are nothing but greenwashing.

Q&A: WHAT’S CARBON OFFSETTING AND HOW DOES IT WORK?

What is carbon offsetting?

Planes produce CO2 by burning aviation fuel. Offsetting is when this greenhouse gas is ‘cancelled out’ by individuals, companies or organisations that donate money to projects claiming to cut the amount of CO2 going into the air, such as tree-planting or giving low-emission stoves to poor regions. The concept was developed in the 1970s and 80s and first introduced in the US in 1990 to combat air pollution and acid rain. Trees suck CO2 out of the air while the stoves cut the amount that would otherwise be released. Those who offset claim to have a smaller ‘carbon footprint’ and some have ‘net-zero’ emissions. Airlines are among the biggest polluters because one ton of aviation fuel emits 3.15 tons of CO2.

How does it work?

‘Carbon credits’ can be bought from verified schemes. Last year the average cost was £18 per tonne of CO2. Some meet standards set by expert groups but many, such as Ryanair’s Irish forest scheme are entirely self-regulated. The carbon trading market is worth hundreds of billions and is now booming as politicians scramble to meet ambitious emissions targets.

Why is it criticised?

Critics say it is a ‘Wild West’ industry without transparency or regulation and no universal standards. No one agrees how emissions should be measured because a passenger flight’s carbon footprint can vary wildly depending on cruising altitude weight and weather. One US study by Tufts University, Maine, worked out that emissions from flights between Boston and Frankfurt varied between 1.43 and 4.14 tons. Critics also point out that many ‘offsetting’ schemes would probably have gone ahead anyway, so there is no additional benefit. And as celebrities such as actress Emma Watson deflect criticism of the air miles they clock up by saying they offset their travel, the system has been compared to Roman Catholic ‘indulgences’ – a way for the rich to pay for absolution from sins, rather than changing their behaviour.

Yes, but an international scheme called Corsia set up by the UN-run International Civil Aviation Organisation (ICAO) does not launch until next January. It will require airlines to offset any growth in emissions beyond 2020 levels. The ICAO is finalising a list of 14 approved ‘offset providers’ to invest in. For now, UK airlines are donating to a variety of projects that claim to offset CO2 emissions. The Government is currently considering whether to force airlines to add carbon offsetting charges to each journey.

What do airlines say to critics?

Aviation bosses admit offsetting is not perfect, but say that there is little else they can do for the moment. Zero-emission electric planes are decades away, and there is not yet enough funding to research and create a greener alternative to aviation fuel. They see offsetting as a temporary fix until technology allows more significant improvements and claim it’s better than nothing – even if not every scheme delivers all of its promised benefits.

‘This latest development further confirms that Ryanair has been advertising false green credentials, which is symptomatic of the entire aviation industry.’

Last night, the Native Woodland Trust (NWT) said it had sent Ryanair an invoice of £13,000 for ‘wasted’ work on the project.

As part of its 12-month contract with the NWT, Ryanair agreed to help plant 20,000 oak trees on a patch of neglected land in Co Roscommon, Ireland.

In a video on Ryanair’s YouTube account the trust’s chairman, Jim Lawlor, said: ‘We’d like to say a big thanks to Ryanair and to all of their customers who have chosen to offset their carbon when booking their tickets.’

But the NWT said it now faces a bill of more than £21,000 to finish the mammoth project.

General manager Linda Lawlor told the Mail: ‘We have made all sorts of promises to the local community which we still have to deliver, but now we don’t have Ryanair’s money.’

Dr Simon Berrow, chief executive officer of the Irish Whale and Dolphin Group – the other project Ryanair has ditched – said the airline had donated £85,000 since September 2018. He told the Mail: ‘It’s a pity. We appreciate it’s not an obvious fit – whale research and carbon offsetting.’

Ryanair’s decision to end the two contracts, worth £172,000, comes after a BBC Panorama investigation cast doubt on the effectiveness of the schemes at offsetting Ryanair’s emissions.

Professor Simon Lewis of UCL said the airline would have to plant trees covering 12 per cent of the UK to offset its carbon footprint, and that for each of the next 20 years the tree project would offset less than 0.01 per cent of Ryanair’s 2019 emissions.

He told Panorama the schemes are ‘woefully inadequate’.

‘It’s a drop in the ocean. It’s a green gimmick rather than a serious attempt to slow down climate change,’ he said.

Environment groups have criticised offsetting schemes as a ‘green smokescreen’ for the devastating impact of commercial aviation. Critics say they lack regulation, leading to claims airlines are disguising the scale of their evironmental impact.

Greenpeace chief scientist Dr Doug Parr said: ‘Ryanair is one of Europe’s worst carbon polluters, and signing up to a bunch of offsetting schemes is not going to change that.

‘It’s bad enough that many airlines are using offsetting as a licence to pollute, but they often encourage their customers to join in the greenwash, too.

Ryanair chief executive Michael O’Leary said it was ‘absolutely wrong’ that the airline’s schemes were inadequate and that the £1 donation was not meant to fully ‘neutralise’ passengers’ flights.

Ryanair said in a statement it had contributed £85,000 to each of the dropped projects and had fulfilled all its commitments.

It added that passengers’ offset donations would now go to bigger projects such as the Algarve forest and Ugandan cookstoves.

It insisted that its £543million environmental tax bill this year ‘vastly exceeds’ the carbon cost of its flights, adding: ‘Independent studies confirm that our CO2 emissions are up to 50 per cent lower than those of competitor major airlines.’