A massive breakthrough in the search for a cure for diabetes has been made by researchers who have successfully cured diabetes in mice for the first time using converted human cells to keep the disease at bay.

The human stem cell strategy functionally cured the disease in mice for at least nine months and in some cases up to a year, giving hope to the millions of human patients around the world.

The converted cells allowed the mice to rapidly produce enough insulin to break down high blood sugar causing diabetes. Tests saw their sugar levels return to a normal, safe level in as little as two weeks.

Around 400 million people globally have diabetes, for which there is currently no cure. People can manage the disease through diet, lifestyle changes and medication. 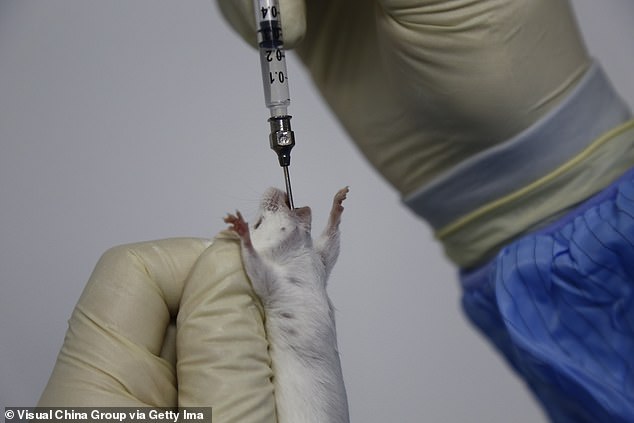 Researchers have successfully cured diabetes in mice using converted human cells that can create insulin. Pictured a researcher experiments on a lab mouse in China 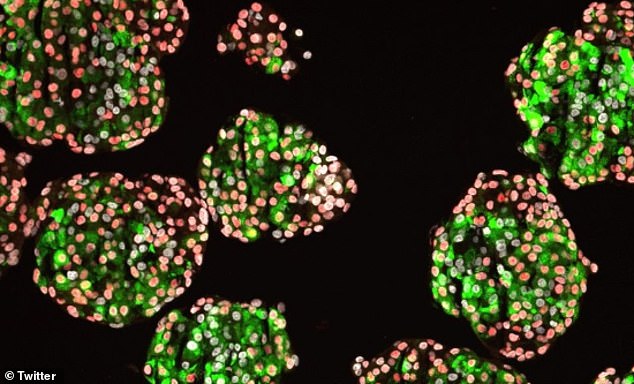 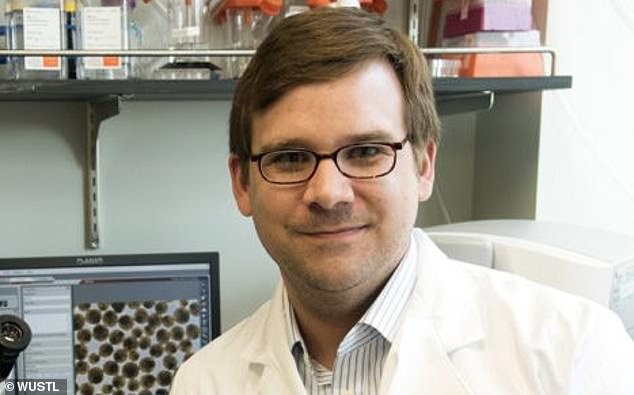 Scientists at the Washington University School of Medicine in St. Louis revealed on February 24 that they had successfully converted human stem cells into insulin-producing cells and demonstrated in mice infused with the converted cells that they can act as a rapid cure to diabetes.

The research transformed other types of cells into beta pancreatic cells which produce the insulin hormone needed by the body to break up blood sugar.

The findings were published in the journal Nature Biotechnology.

‘These mice had very severe diabetes with blood sugar readings of more than 500 milligrams per deciliter of blood — levels that could be fatal for a person — and when we gave the mice the insulin-secreting cells, within two weeks their blood glucose levels had returned to normal and stayed that way for many months,’ said principal investigator Dr Jeffrey R. Millman, an assistant professor of medicine and of biomedical engineering at Washington University.

The researchers initially discovered how to convert the cells several years ago but with certain flaws. After conversion, about a quarter of the cells were not insulin-producing but other kinds of beta cells such as liver cells.

While not harmful to the mice, these cells went no way to combat the high blood sugar problem or diabetes, making the overall process ineffective.

‘A common problem when you’re trying to transform a human stem cell into an insulin-producing beta cell — or a neuron or a heart cell —is that you also produce other cells that you don’t want,’ Millman explained in a statement from the university.

‘In the case of beta cells, we might get other types of pancreas cells or liver cells.

‘The more off-target cells you get, the less therapeutically relevant cells you have,’ he added.

‘You need about a billion beta cells to cure a person of diabetes. But if a quarter of the cells you make are actually liver cells or other pancreas cells, instead of needing a billion cells, you’ll need 1.25 billion cells. It makes curing the disease 25% more difficult.’

After their initial findings, the research team returned to the cells’ conversion, looking to the internal scaffolding, known as the cytoskeleton, which forms a cell’s shape and allows it to interact with its surrounding environment.

This is turn allows the cell to convert a physical interaction into a biochemical symbol, such as the production of insulin when a beta pancreatic cell encounters blood sugar.

Blood sugar, otherwise known as blood glucose, is the body’s main source of energy and comes from the food you eat

The disease was though to be incurable

‘It’s a completely different approach, fundamentally different in the way we go about it,’ Millman continued.

‘Previously, we would identify various proteins and factors and sprinkle them on the cells to see what would happen. As we have better understood the signals, we’ve been able to make that process less random.

‘We were able to make more beta cells, and those cells functioned better in the mice, some of which remained cured for more than a year.’

Another significant find of the research was that the cells used could come from multiple different sources, opening up the abilities of the technique.

The prospective cure remains a long way off from being used on humans as extensive tests must still be carried out to confirm its safety and accuracy.

The next step in the research will include testing the cells on larger animals and for longer periods of time.

The process would also need to be automated if there was any hope of the treatment acting as an alternative to the insulin injections many diabetic patients currently rely on.

The research still remains encouraging as the first time a mouse, a mammal, has been functionally cured of the disease which has previously been thought to be incurable.